I’m a fan of the fundamentally flawed category of games known as “space sandbox” – Elite Dangerous and No Man’s Sky are the current two leaders, with Star Citizen in a state of apparent endless alpha test. I hope someone eventually writes a book about the making of Star Citizen, though I fear it will be like “Hearts of Darkness” for gaming.

Before we go further, ego compels me to say that I KNOW I am not a very good videographer. Taking a bunch of stuff and editing it down into a compelling video segment is a serious skill you need to hone for years. I don’t do that. I’m just having fun. So, please ignore the cheese. There are better videos that show Elite/NMS gameplay but these are mine.

When Elite:Dangerous first came out, I played it seriously for about a year and a half, then I got busy with other things and have sort of dropped off the game because the direction it’s going in didn’t excite me that much and I’d done a fair bit of what I’d set out to do. No Man’s Sky dropped a couple weeks ago and I’ve been playing a bit with that, as well. I should also warn you: this posting includes opinions but no spoilers.  At the bottom I’ll do a break and then dump some opinions about the idea of space exploration games.

I’ve done a few videos of my in-game stuff in Elite, mostly trying to illustrate my experience of the scale of the game. It’s gloriously huge. And it’s seriously beautiful. And horribly flawed.

Procedural generation is a wonderful technique for producing re-visitable random (whatever) and the folks at Frontier Developments (that made Elite) have done the best they can with real astrophysics, to create a pretty cool galaxy simulator, of sorts.

For anyone who’s not completely unaware of their relative size and importance, Elite will teach you how small you are. And that’s pretty darned useful, really. You’re small. Really small.

Early in most people’s Elite experience they try asteroid mining, which is a good way of safely getting capital for ship upgrades. And, humans being what we are, we find a great mining spot and then – “Shh!! It’s a secret!!!”  Until eventually we realize that a metallic asteroid ring around a gas giant: your species could mine that until the sun blows up, and not even deplete it significantly. 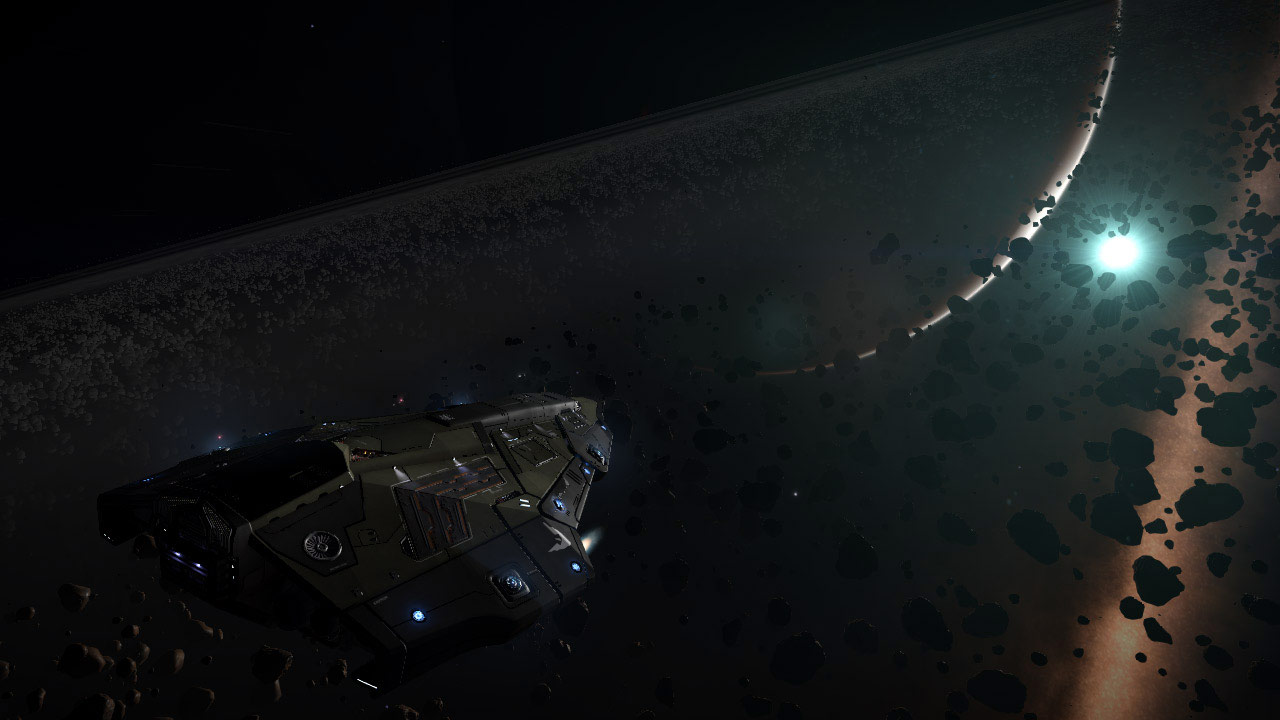 The game graphics are jaw-dropping and lately I’ve been integrating (and finally got working!*) an HTC Vive VR kit. Being able to rubberneck around the cockpit of your ship is an amazing feeling. You feel like you are “there” and not sitting in your chair at home.

Elite’s galaxy simulation tries to be good – and (did I mention?) it’s beautiful. But it has a few things I find utterly stupid.

You can go full throttle at a black hole, and the game stops you. You take damage, but it’s often minor. You can go full throttle at a planetary ring, and the game stops you. Eventually, if you try really hard, you can boost into a metallic asteroid and blow up. But you have to try. In the universe of giant suns, black holes, binary systems, ridiculously close binary systems – the most dangerous thing is: landing at an orbital. If you hog a landing pad too long, they’ll shoot you down for loitering. In the universe of Elite:Dangerous, the most dangerous thing is parking tickets. 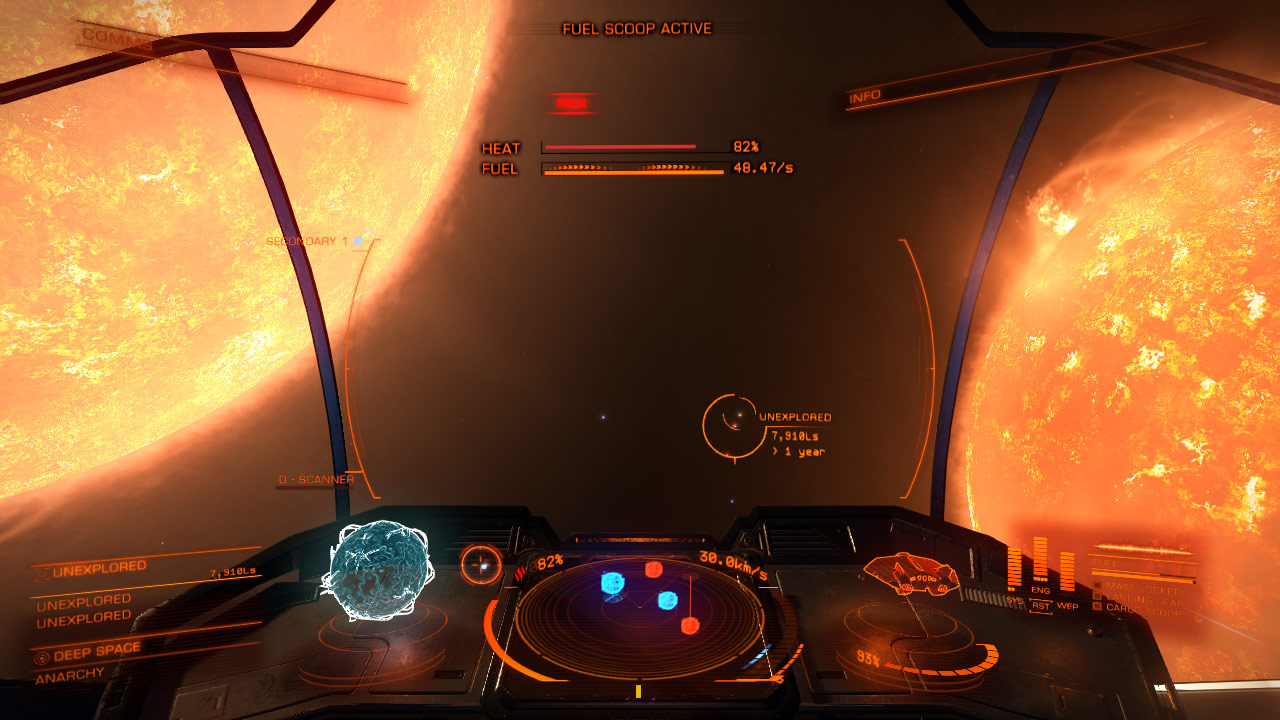 There is an amazing moment when you encounter things like this, which nobody has seen before, and you feel like you’re there. It’s intense. But then you realize that you can travel to Sagittarius A*, the supermassive black hole at the center of the Milky Way Galaxy, in a week or so of realtime, and in-game you’re in almost no danger at all, except from other humans and parking tickets.

I was scrolling around the galaxy map once and saw something huge and fascinating and went there to check it out. 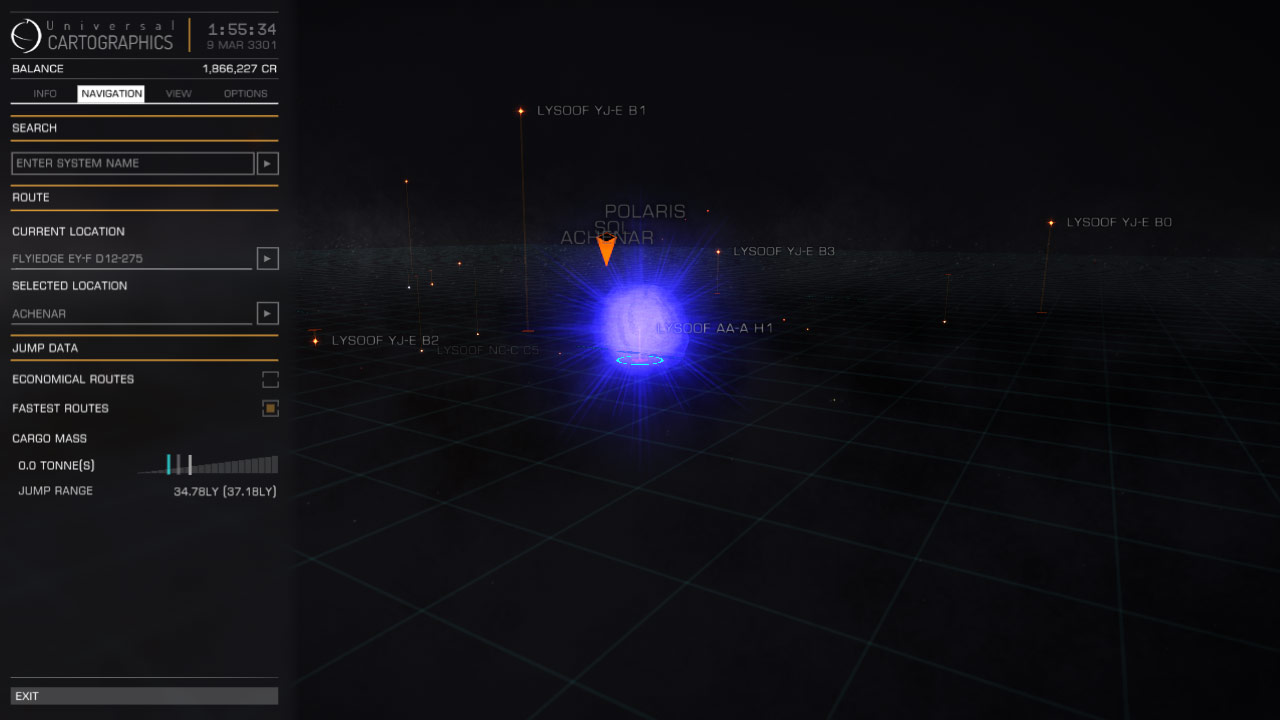 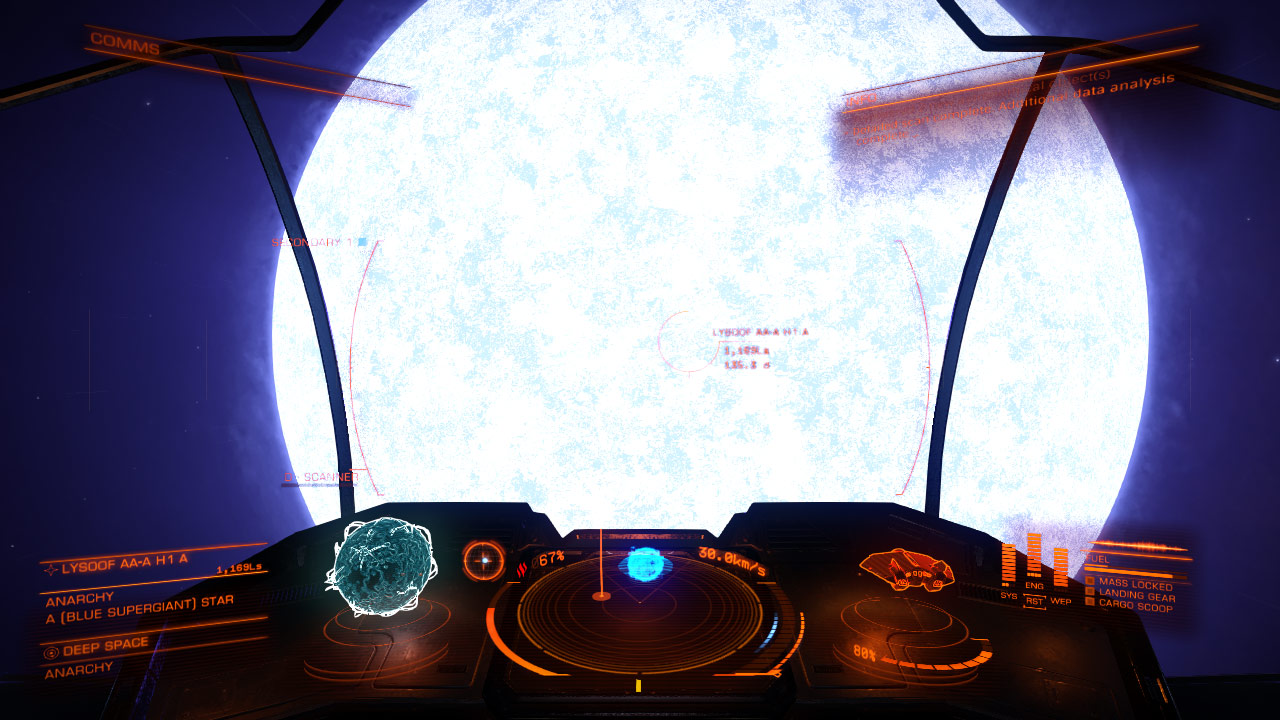 No Man’s Sky has the same problem: you’re a space explorer and you’re on a mission to something and you can fly around and explore this amazing galaxy of stuff. In No Man’s Sky, you’ve got a game mechanic that’s almost like World of Warcraft: you can run around and collect plutonium chunks (really! :eyeroll:) and carbon and a bunch of other stuff, and make ammunition to power your warp drive so you can jump from one star system to another. Unlike Elite:Dangerous, No Man’s Sky doesn’t try to pretend to be sciency, it tries to be fun. 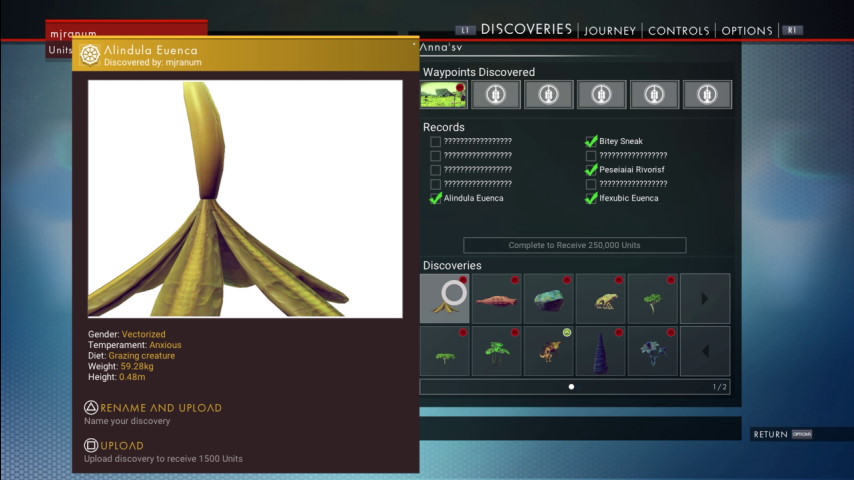 I discover the Banana Squid

In No Man’s Sky, practically every planet has life. In Elite:Dangerous, practically every planet is another empty ball of rock, metal, and gas. In Elite:Dangerous you can’t name anything – not even your own ship, let alone that star you discovered. In No Man’s Sky you can name systems and critters and locations on planets that nobody but you will ever visit, anyway. I find it interesting how the sense of scale works differently in the two games.

I have to admit, I squee’d a bit when I found the banana squid. And the glove eels. My splashing around in the water upset the glove eels, though, so I left. Besides, there’s not much you can do with them except point and say “I discover thee, glove eels!” 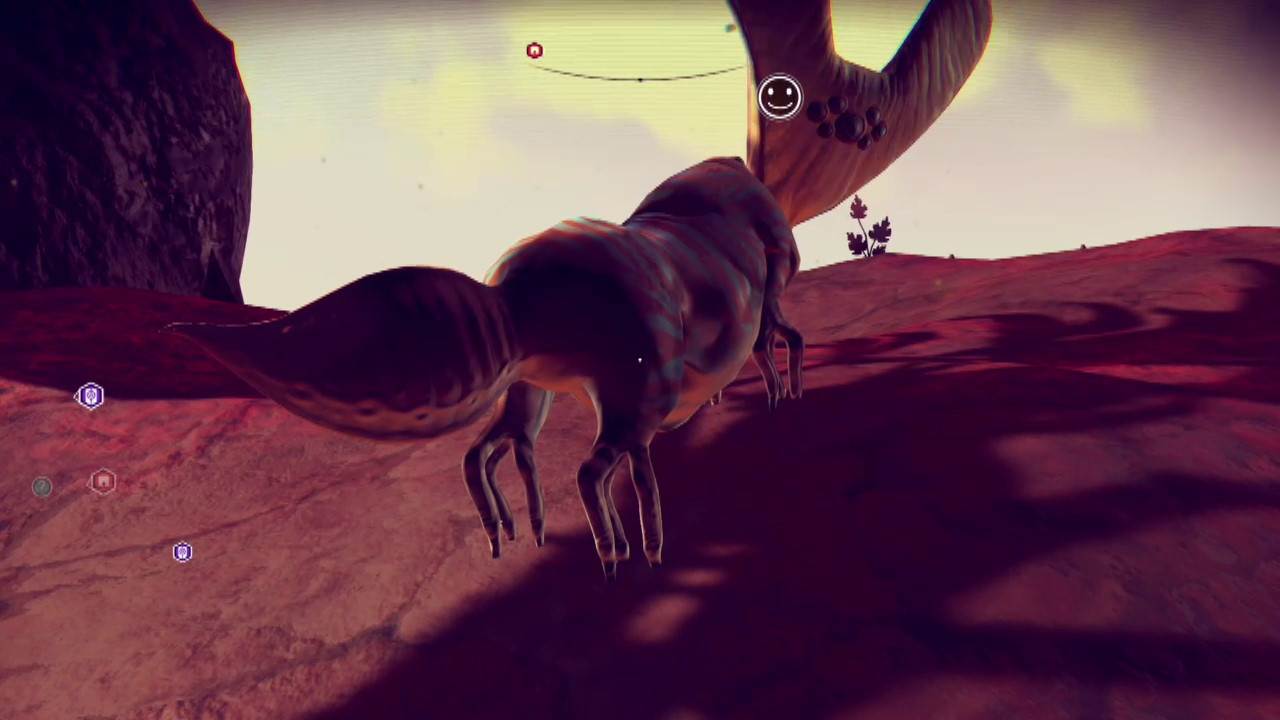 The “HandAlope” is happy because I fed it some carbon

Which is pretty much all you can do in Elite:Dangerous, too. “Oh, look! The blue giant I visited: it’s blue and gigantic.”

I probably won’t play more than a dozen hours of No Man’s Sky. It bothers me too much that every planet has aliens – the entire galaxy appears to be thoroughly colonized (which is absurd!) and the aliens all have fairly comprehensible human agendas. A lot of them are bipedal/binocular, etc. And the life forms are remixes of the same components, sort of jammed together. Don’t get me wrong, I think that’s an amazing bit of work, but you quickly lose your sense of discovery of new and different things because everything is new and different.

One common player complaint about Elite:Dangerous (which I do not share) is “There should be stuff! It’s just huge and boring!” I always hated that complaint because our galaxy is huge and boring. And amazingly exciting in the places that’d kill you immediately, except Elite:Dangerous doesn’t have those. So, one black hole looks like another, and you can fly at a neutron star and see how close you can get before it’s visible and your temperature goes up.

It’s as if No Man’s Sky is the answer to Elite:Dangerous’ huge galaxy of self-similarity – they added exciting aliens you can interact with, and banana squid you can chase and … they’re so self-similar that they’re boring, too. I certainly don’t feel like I am exploring a new planet, when it tells me I’ve discovered the place – and a wedge of alien space-craft go flying overhead in formation. In No Man’s Sky my glass is 1% empty and in Elite:Dangerous, my glass is .001% full.

I actually don’t want there to be alien spacewrecks in Elite:Dangerous. At least not that humans would ever find. Because, that’s how the galaxy almost certainly is. The problem with trying to add exciting things is that exciting things quickly become tourist destinations because they’re exciting. Suppose No Man’s Sky’s life-form generator randomly spits out a planet where the life-forms look remarkably human. No doubt there’d be screenshots of that all over the place and nobody’d go there. Or a few people would go there and there would be more screenshots.

There is a thing I call the “torchlighter syndrome” which makes my head explode when I encounter it. If you’ve played any game, you’ve encountered it: you’re in the lowest level of a dungeon that has been sealed for 500 years and… there are burning torches in the wall-sconces. And nazis. And giant spiders. Oh, and 500 years ago some thoughtful whatever left boxes of 9mm ammunition and food around thinking “some day, some interepid quester will find this place, and they’ll need ammunition so they don’t die.”   I keep daydreaming about going into a few games like Dragon Age, etc, where you can light wall torches (in some spots) and doing a mechanima movie about “the torchlighters” – you know, the vast under-appreciated organization that maintains unexplored dungeons, and keeps the torches lit and the ammo laid out. Because, some day, the paladin will come.

This sort of stuff, alone, is worth the price of admission. A ringed earth-like planet with an orbital around it. Flying into something like this with a head-mounted VR kit is insanely cool.

Youtube mangles videos to compress them and resize them. My screengrabs from Elite are recorded off a GTX 980 running with all the graphics options on maxium, at 3k. My video editing software and desktop can barely handle them. But, if you want to see what this stuff looks like at in-game resolution, I’ve got a few of the mix-downs here – save them to your hard drive and play them without network lag:

(* The cutting edge is where people bleed. Getting the right mix of controller programming, headset settings, in game graphic settings, windows device drivers, and controllers – can be weeks of work. And things occasionally get weird, like your audio cuts out and then you have to spend a while rebooting and debugging configurations. Eventually this will all be a plug and play kit that comes with Playstation or Xbox and requires no system administration experience. But, for example, if you want to use a programmable high-end controller: you have to first program the controllers’ driver to get the button signals it sends to be the ones you want it to send, then configure the game to do the right thing when it gets those button signals. Lastly, you have to train your eye/hand to know what your brain wants to happen.)

Things That Delight Me: 6 – Poe’s Tales » « Monday Meslier: 193 – It Is Not True That Atheism Sunders All The Ties of Society