If you’re like most of us, you buy a variety of surfactant products: for your dishes, for your body, for your clothes – some of them are quite expensive. Most of them are made of the cheapest possible stuff. It’s not really hard to do better than the manufacturers do. It’s also fun to learn how to read the ingredients of soaps in hotels and stores – yeah, that “vegan” soap bar with the “sodium tallowate” in it? That’s beef fat.

First, let me get something out of the way: the scene in Fight Club where Tyler puts lye on Narrator’s hand – that’s not how lye behaves (that was baking soda and vinegar)  Lye is dangerous but it’s not that bad: if you get it on your hand, wash it off. Splash some vinegar on it to neutralize it if you want to. My worst lye “incident” was when I picked up a bottle of lye beads by the cap (don’t do that) and the bottle dropped to the floor, scattering lye beads all over my kitchen. They promptly melted from the humidity, and I spent 2 hours on my knees with cider vinegar and paper towels. If you want to be really paranoid, make sure you have a gallon of vinegar handy in case you need to neutralize a bit of lye, and work in a well-ventilated space. 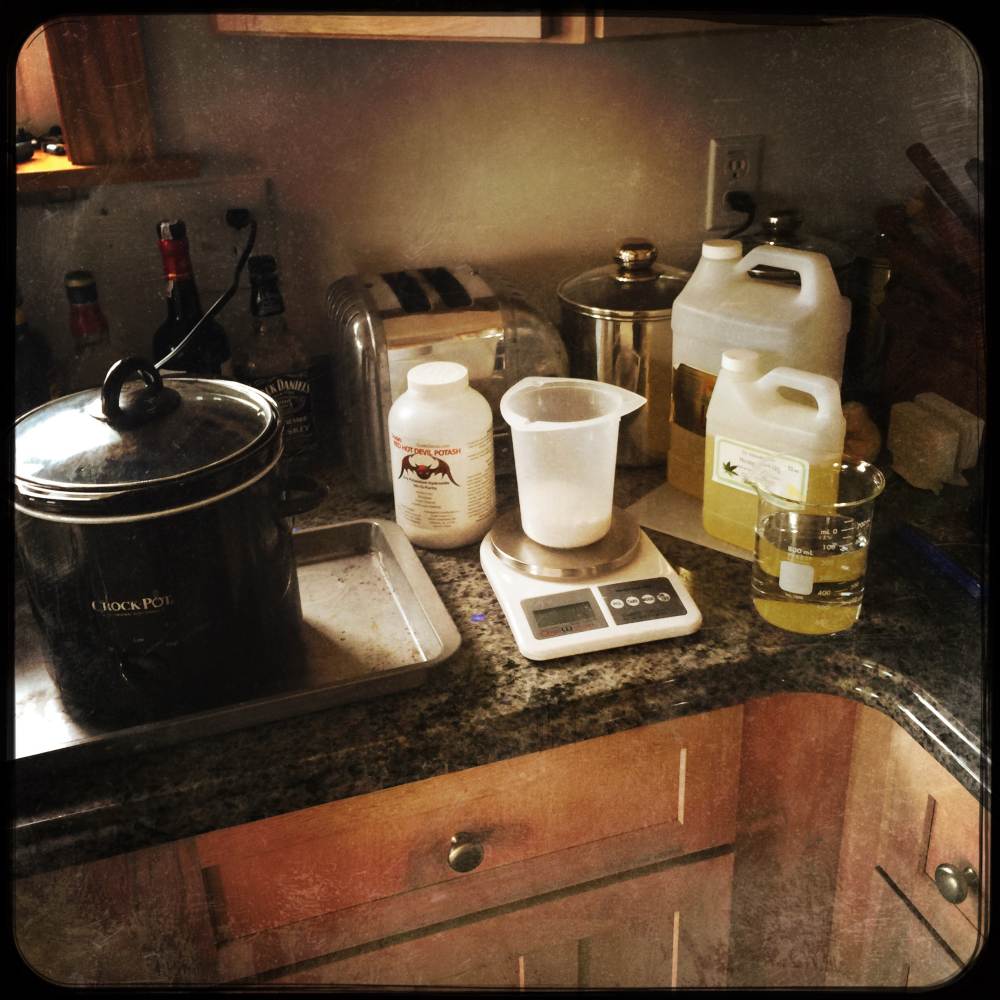 You’ll need oils, potash (I get Red Devil on Amazon) Note: for liquid soap, you use potash instead of lye.  A crock pot helps, though you can also cook it in a big pot on very low heat. A good scale is necessary; the quantities 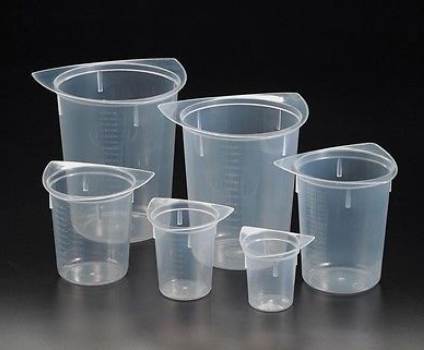 are critical and make the difference between goo and soap, or soap that bleaches the color out of your hair. You may also want a phenothalien indicator so you can test to see if your soap is too basic. I am also a huge fan of tri-pour polypropylene labware – it’s cheap, cleans up great, nothing will stick to it, etc.

Then you need a recipe. That’s easy too. Mark if you’re making a liquid or a solid soap, figure out quantities that work for you, and calculate the potash and water based on the amount of oil. There are lots of good saponification calculators on the web. (I use the brambleberry for liquid soap, and the soap guild’s for solid)  If you want more detailed instructions than these, this is a great walkthrough on liquid soap-making.

I am mostly writing this to encourage you to do it yourself. When I was a kid, my parents didn’t discourage me from doing stuff just because it was mildly dangerous – they realized that some day I was going to go get a job and drive to work and, if you think about it, that’s what kills you (that, and smoking!) not messing with chemicals. If I had kids I’d probably host “craft sunday” and make something each week. Teach the little rotters how to be careful with something minor like lye and maybe they’ll listen when you tell them that, no, seriously, gasoline is the most dangerous substance you’ll encounter on a regular basis. 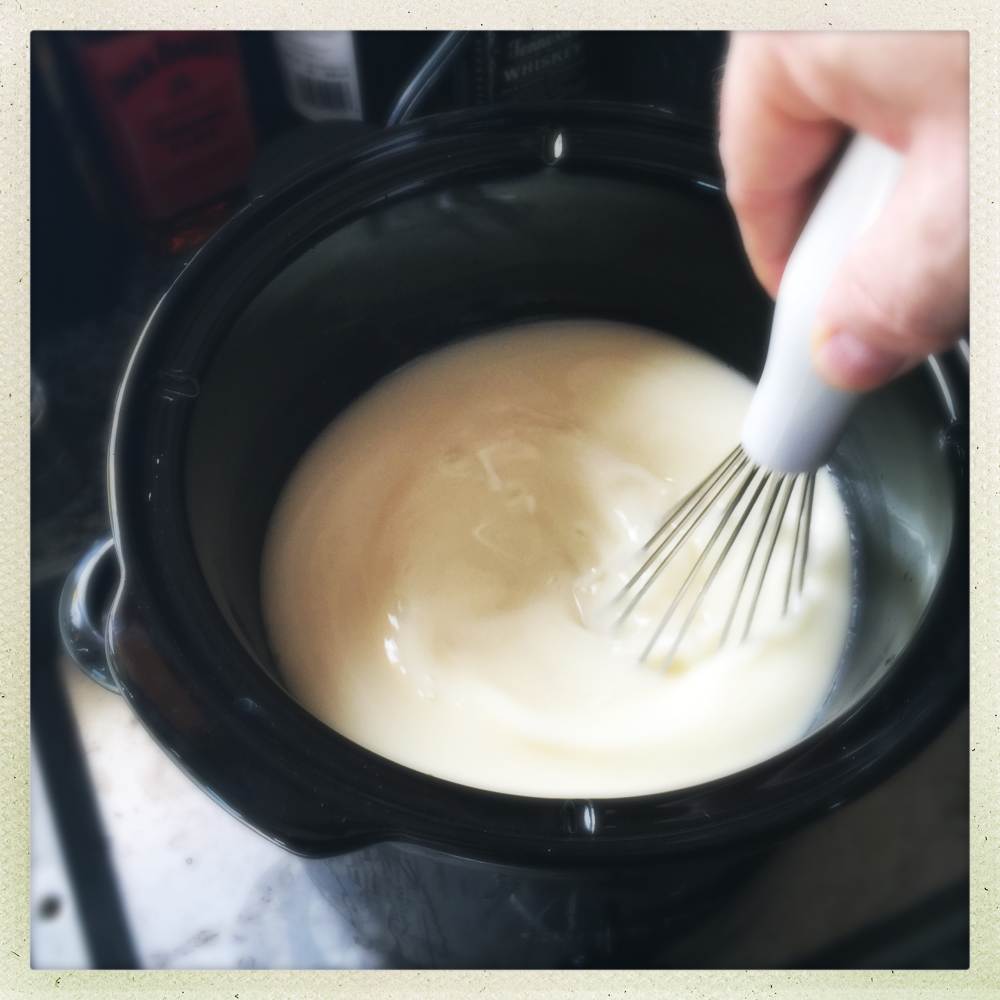 Once you’ve mixed your potash and water and it’s dissolved and cleared, let your oils come up to temperature (low!) in a crock pot. Then gently dump the potash/water mix into the oil while stirring. Congratulations, you’ve made soap.

The rest of the process is all about letting the soap saponify, which is basically the sodium ions locking into the fats, which requires heat and moisture and time. Then for solid soaps you let the water evaporate out, and for liquid soaps you dilute it so it doesn’t turn into a hard lump of soap jello.

As your soap cooks (this takes about 4 hours, so I did mine in the morning then worked on other stuff and went and checked on it every half hour)   Oh – here’s a hint! Do you see the tray under the crock pot? Soap bubbles a lot and it wants to get out of the pot and walk around your kitchen.

The soap will go through a variety of stages. Most soap-makers have names for each stage. “Trace” – the initial mix when it goes non-newtonian and turns thick like whipping cream. I call this the “phlegm” stage – when it gets clear and foamy and sort of separates. 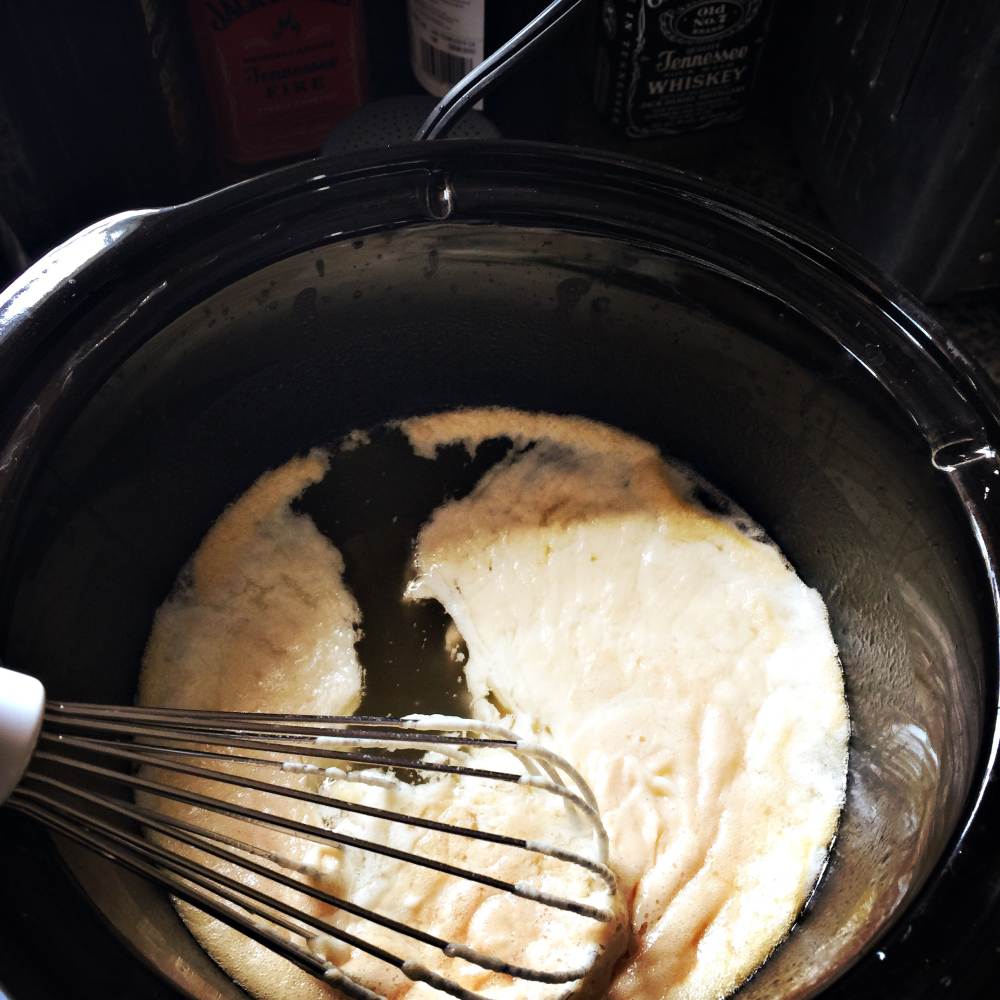 That’s the fats that haven’t unzipped and saponified, floating atop the saponified fats. You need to keep mixing it periodically.

Then there’s the “expansion” stage, which I didn’t photograph because I was too busy trying to keep the soap in the cooker. At a certain point the moisture level will go down and it’ll start to gel. At that point, the bubbles get profuse and it may try to leap into your lap.

Finally, it will gel down to a saponified stage: 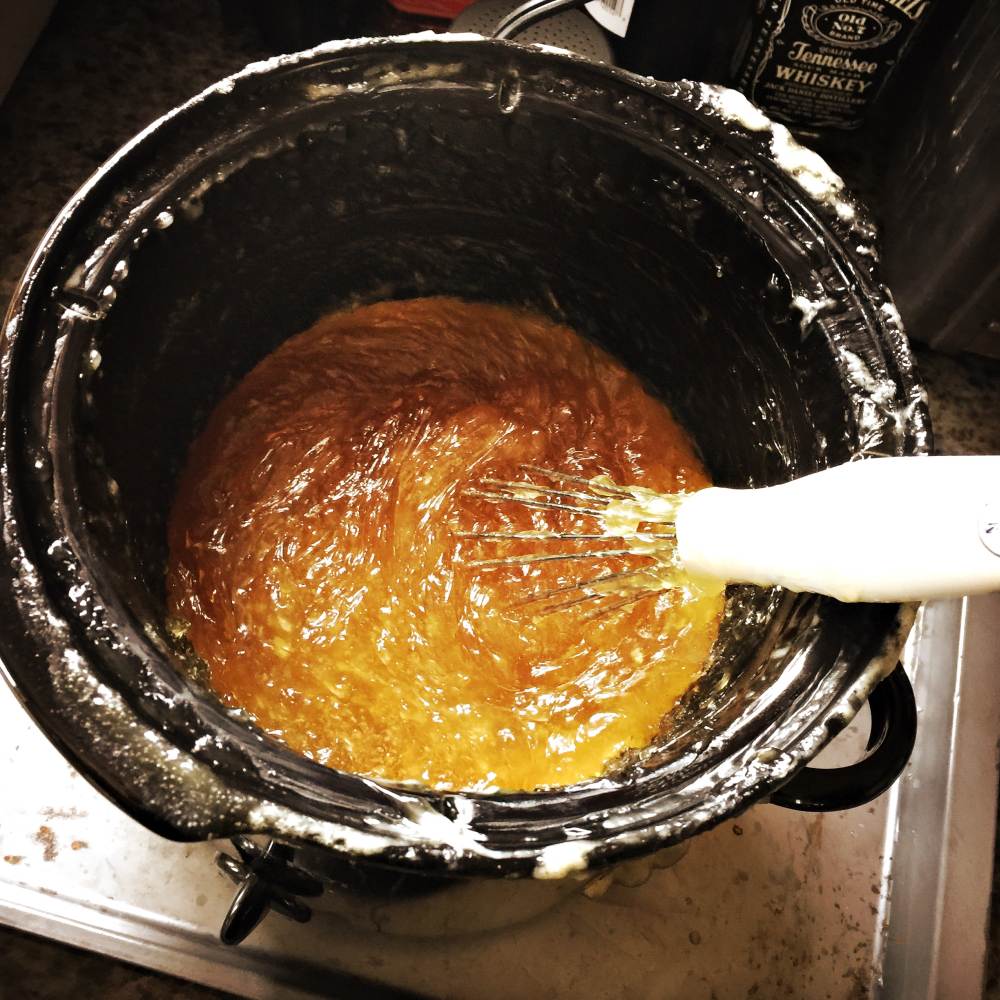 You can see I’ve managed to get soap all over the crock pot and down the sides. This is normal. The funny thing is: it washes off. It’s soap.

Once you’ve got it at that stage you take a larger pot, boil up some water – I use about a quart, with 2 tablespoons of boraxo in it to neutralize any remaining caustic base, then dump it in and dilute the soap into a nice liquid happy mass. 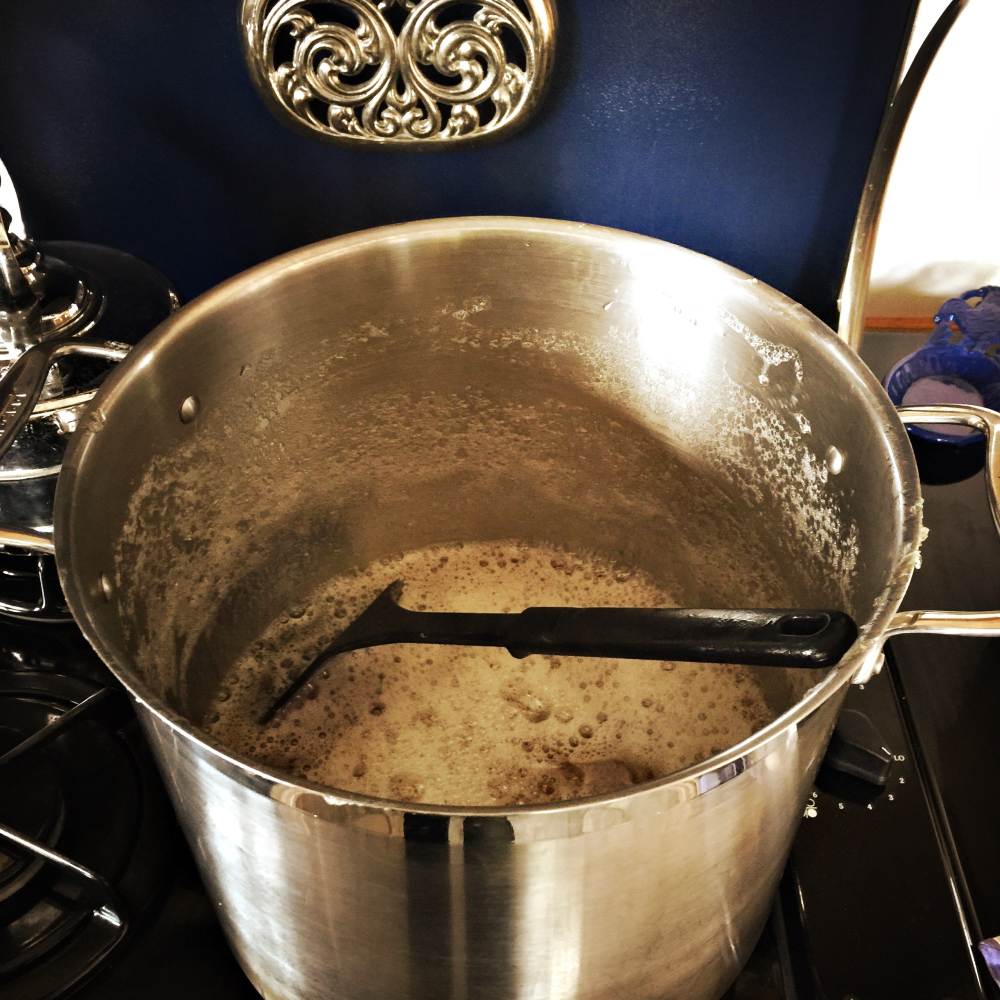 Diluting and neutralizing the soap

Now, if you didn’t dilute it enough it’ll set up like jello when it cools. That’s fine – just store it that way and reconstitute it into liquid later by dumping it into boiling water and stirring it up. I usually add enough water to make about a gallon of soap, such that it won’t solidify. 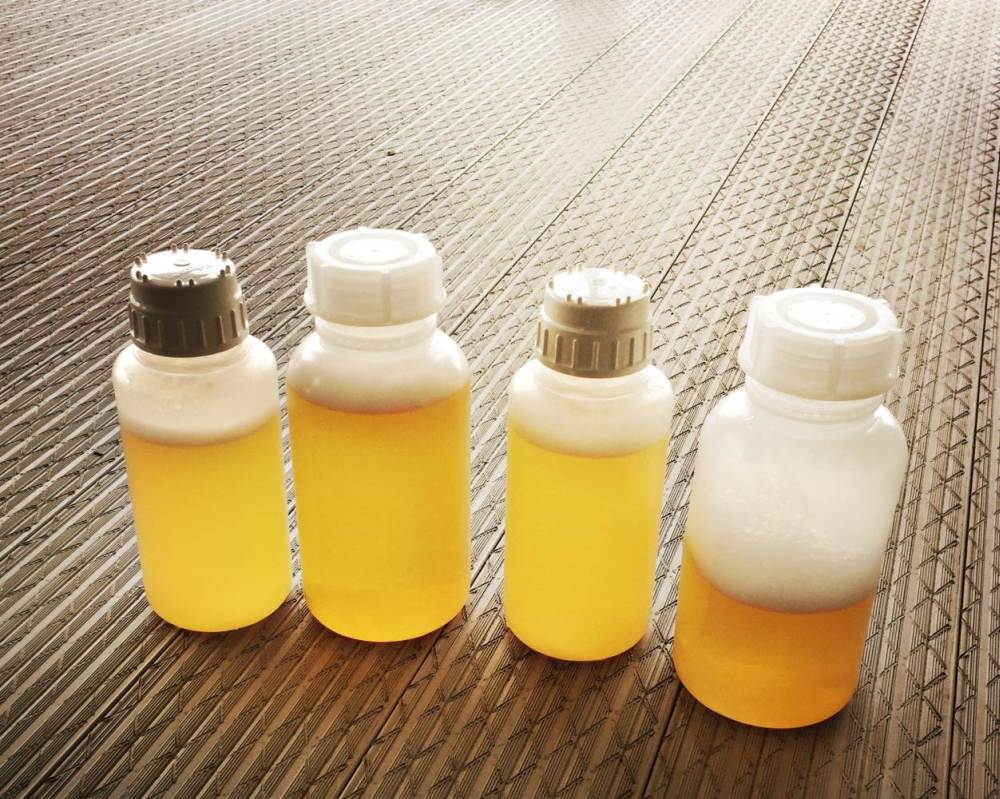 Soap ready to store – I swear those aren’t samples of, you know…

I usually disinfect my storage bottles by swirling some everclear in them and dumping it, before I pour off the soap. Leave the lids on loosely so the bottles won’t crush as it cools, then screw the lids down once it’s room temperature.

Some soap makers add color at this stage, and scent. I leave mine to sit in the basement in the dark for storage (it’ll keep for a year or two easily*)  When I am making something that requires a liquid soap base I just add the scent and dilute it further as necessary, when I am ready to use it.

Then, clean up the mess! 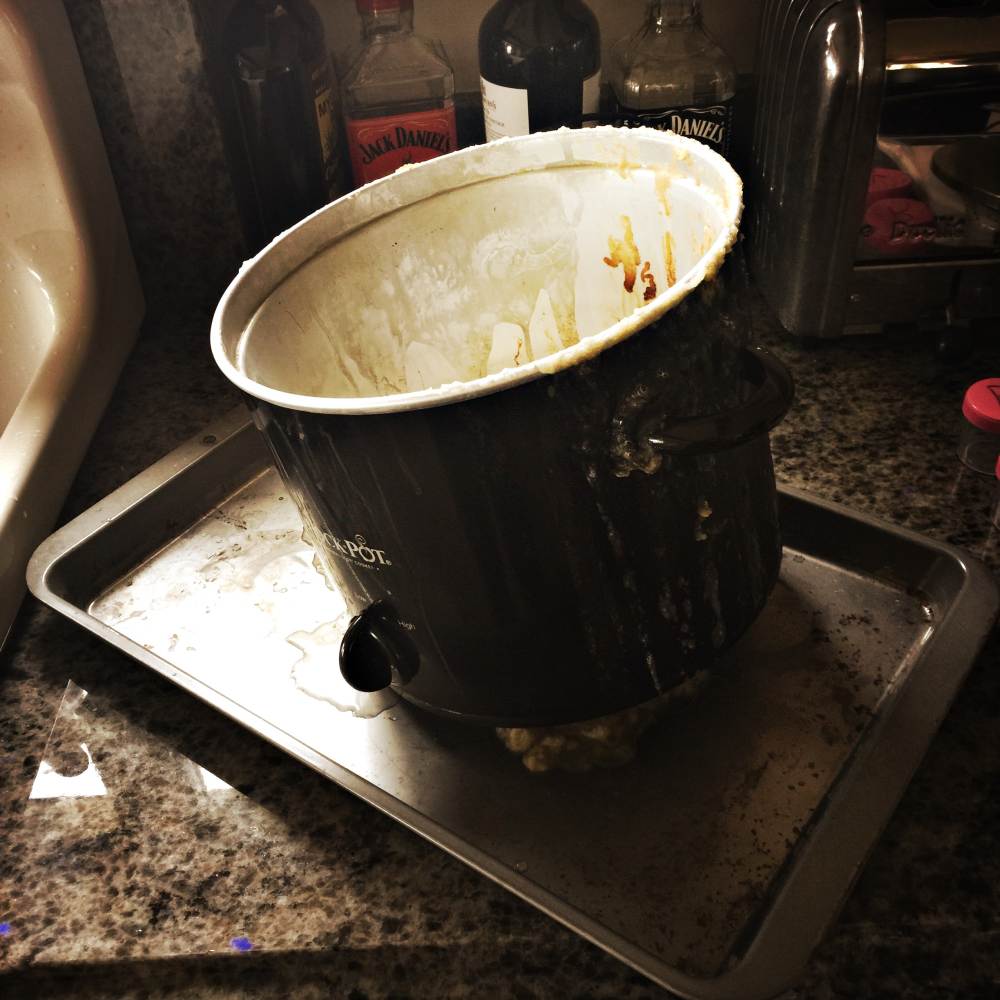 Use dish detergent to clean up your soap mess (joy, palmolive, etc) – fresh soap is not fully converted and it’s not ready to combine enthusiastically with water, yet.

Again, if I had kids present, I’d totally teach them this kind of stuff because it’s a good safe way to talk about weighing things, the physics of combining chemicals (two liters of hydrogen gas combine neatly with one liter of oxygen in a very loud way! but it’s safer to demonstrate with soap) And you can emphasize the importance of not getting stuff all over the place while you’re working because you’re the one who’s going to have to clean it all up again, anyway.

Right now I am washing my clothes in hemp/castor oil soap scented with bay rum, benzoin, and frankincense.** What about you?

(* after sitting for a couple months if your soap smells rancid – put the cap back on and throw the whole thing away, don’t try to dump it because apparently you have some kind of bacteria or fungus that can live in soap and you want to minimize its chance of taking up long-term residence in your kitchen! This has never happened to me, by the way – so if you do find something living in your soap, you’ve either made your soap wrong and too many fats got through the process, or you’ve got a publication worthy of Lenski)