In this book we are concerned with how to create mass organizations to seize power and give it to the people; to realize the democratic dream of equality, justice, peace, cooperation, equal and full opportunities for education, full and useful employment, health and the creation of those circumstances in which man can have the chance to live by values that give meaning to life. We are talking about a mass power organization which will change the world into a a place where all men and women walk erect, in the spirit of that credo of the Spanish Civil War “Better to die on your feet than life on you knees.” This means revolution.

The significant changes in history have been made by revolutions. There are people who say that it is not revolution, but evolution, that brings about change – but evolution is simply the term used by nonparticipants to denote a particular sequence of revolutions as they synthesized into a specific major social change.

“Alinskyite” is an epithet if you’re a certain sort of a politician.  I suppose that if Alinsky is anti-Machiavellian, then they must be Machiavellians: against equality, justice, peace, cooperation, equal and full opportunity, and so forth. I’m sure Alinsky would agree with that dichotomy; they are the Haves, who wish to climb the ladder of success and pull it up after them. But, since I am speaking from the pulpit here, I am commanded to be honest and I have to mention that the issues of Alinsky are the issues of the poor, and the issues of the poor, in 1970 America, are the issues of the black people. I believe that a certain amount of the horror that machiavellians show toward Alinsky is that he broke from the natural alliance of the jews to the establishment, and aligned himself with poor blacks and hispanics.

Alinsky made his bones as a community organizer in Chicago’s poor neighborhoods, focusing on improving living conditions for the urban poor. A child of Russian jewish immigrants, he probably grew up surrounded with enough to give him an understanding of racial oppression and poverty. He was not a “red diaper baby” – his politics appear to have been formed by observation of the ongoing depression around him. To understand Alinsky it’s important to remember what was going on around him as a young man: his first real taste of community organizing came from working to organize labor in the “Back of the Yards” neighborhood of Chicago – the place Upton Sinclair was writing about in “The Jungle.”

“Occupy” camps? Alinsky was not from that school. Alinsky’s style would have been to show up with a large number of military surplus tents that he had talked some surplus store or unsuspecting National Guard unit into donating, along with a busload of help from the community – and probably a field kitchen thrown into the bargain. Alinsky was a master strategist, and learned how to squeeze every drop of leverage out of a situation. He’d have seen that the Occupy camps would be much more threatening to the powers that be if they had a sense of permanence, and he’d have gamed that, like he gamed everything he ever did. I don’t mention Occupy lightly in the context of Saul Alinsky – this is a man who was born in 1909, who was a maturing adult when the Bonus Army was encamped in Anacostia and was routed from there by military heroes with bayonets and tanks. The Machiavellians bed-wetting nightmare would be to have someone of Alinsky’s caliber working alongside the Occupy movement.

Radicals must be resilient, adaptable to shifting political circumstances, and sensitive enough to the process of action and reaction to avoid being trapped by their own tactics and forced to travel a road not of their choosing. In short, radicals must have a degree of control over the flow of events. 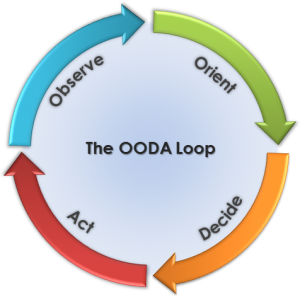 Boyd, formulated as his famous OODA (Observe, Orient, Decide, Act) loop: figure out what the enemy wants to achieve and – if you can figure it out faster than they can – you can position yourself to strike the killing blow when they follow the path their own inertia forces them down. Again and again, in Rules for Radicals we see Alinsky describe situations in which corporations were out-flanked in such a way that they did most of their damage to themselves, in a kind of corporate kung fu. A very nimble fighter like Alinsky, or Boyd, or Trump is dangerous because they can outmaneuver you in what you think is your strongest suit – leaving you floundering or repeating your prepared talking points in a robotic monotone.

Alinsky was no nihilist, though. He has harsh words for them:

Just as the clash of interests within the Have-a-Little, Want Mores has bred so many of the great leaders it has also spawned a particular breed stalemated by cross interests into inaction. These Do-Nothings profess a commitment to social change for ideals of justice, equality, and opportunity, and then abstain from and discourage all effective action for change. They are known by their brand, “I agree with your ends but not your means.” They function as blankets whenever possible smothering sparks of dissention that promise to flare up into the fire of action. These Do-Nothings appear publicly as good men, humanitarian, concerned with justice and dignity. In practice they are invidious. They are the ones Edmund Burke referred to when he said, acidly: “The only thing necessary for evil to triumph is for good men to do nothing.”

Rules for Radicals on amazon.

Rules for Radicals on archive.org.

Monday Meslier: 51 – It Is Not True That The Object Of The Formation Of The Universe is to Render Men Happy » « Jello Jesus