In 2011, christian fundamentalists slashed up a copy of Andres Serrano’s “piss christ” 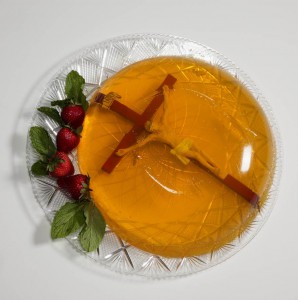 Never mind the stupidity of destroying a print of a photograph – to destroy a photograph, you need to destroy the negative! Or, nowadays, all copies of the full-rez digital file and edits – christians have periodically taken a swing at Serrano’s work. In other words, it was highly successful as art. Personally, I think Serrano’s best work is his photos of the dead (which I will not link here) which are also challenging, though I consider all of these to be “cheap shots” including my own photos that are just thrown together to irritate or provoke or scare or shock.

Technically, though, this was a laborious shot. In order to get the adornments (strawberries and mint leaves!) the right scale, that dictated the size of the crucifix which dictated the size of the plate and the jello-mold. Which dictated the quantity and weight of the jello. Which worked out to a mass of jello about a foot and a half across, 6″ thick, – 12 packs or so. Then came the problem of how to embed the crucifix at the correct depth without causing bubbles or damage to the jello – I was not going to be able to just flip a mass of jello that large over without risking a “jello excursion incident” onto my studio floor.

So, I cheated. I had the idea when Serrano’s photo was destroyed but put the whole idea on the shelf until December.

It took me some ebaying to find a sufficiently large bowl (a big melamine punch-bowl) and assemble all the components. Then I used my big chili-making pot to make the correct amount of jello (determined by pouring water into the bowl, then into the pot, and adding some margin for loss) Since it was december, it was about refrigerator temperature outside, so I did a large pour to get the depth right, then let it solidify on the porch – which took hours. Then I added the crucifix (I almost put it in upside down!) and the rest of the jello and let it cool overnight after informing the dogs it was Not Dog Food. The next morning I had a solid mass of very cold jello, which I hauled over to the studio and set up the lights, white matboard, etc. Put the plate on top, flipped it over, and … the jello was still sticking to the bowl. A touch with a propane torch released it nicely and I got the shot. Then I ate a bit and dumped the remaining 20lbs of jello into the ditch. The ants probably thought god had delivered them a great blessing.

It is much more pleasant to work with jello than with fermented piss.