I’m pretty sure everyone makes that joke, when they are talking about a boring bar.

A couple of weeks ago, I replaced the valve body on the hot water side of my shower. It was a big mess, because the screws down the center, that hold the levers on, had corroded badly and I had to drill the head of the screw and fit a little bitty screw extractor down in there. [a screw extractor is a hardened steel bit with a reverse thread cut into it: you drill a hole in the screw that is about to die, put the extractor in, and crank it out. If you are lucky the head of the screw does not spontaneously disassemble]

Stainless steel hex-cap 10/32 bolts cost about $0.15 in quantity; too expensive for the manufacturers of fine plumbing. I ran a tap down the threads and now there are nice stainless bolts in there.

When I got the valve escutcheons off I discovered that the steel was really rusty and – something that has escaped my notice for 14 years – they didn’t match. I started looking online for replacements, when I realized something: the shower cabinet has these nice extruded aluminum frame pieces with a brushed finish, what if I made my own brushed finish aluminum escutcheons? I have a nice 2 1/2″ piece of aluminum round stock, and a lathe. What could possibly go wrong? Besides, it’s about a perfect beginner level 0 project. 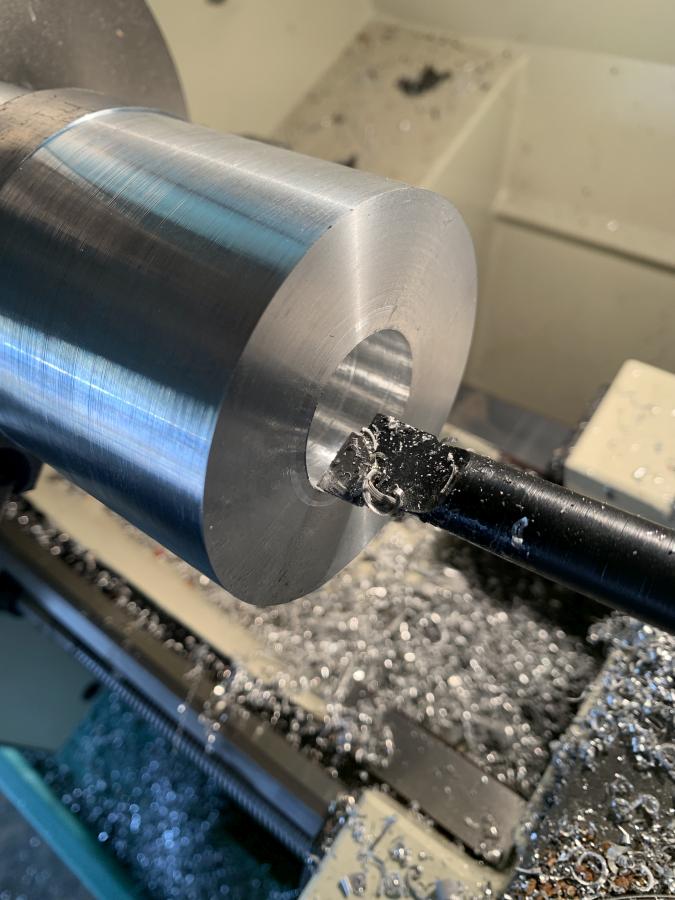 So, I chucked up the chunk of aluminum round, did a surface pass to make it concentric, then applied a series of drills (1/4, 3/8, 1/2, 1″) to make a big hole in the center, then used a boring bar/carbide carrier to enlarge the opening. I admit I felt a bit silly measuring the hole in the old escutcheon with a caliper so I could exactly duplicate (“exactly” within woodworkers’ tolerance) the opening.

Since I was making 2, I made the opening 1″ deep, which offered plenty of length for the pieces and the kerf [what do machinists call it?] for the parting tool.

Mostly I had fun watching the little curlicues [“swarf”] peeling off the metal, and experimenting with the effect that various rotational speeds had on the way it cut. It’s a meditative process because you really can’t just hog material away; you’re shaving a bit with every pass but it’s a bunch of passes. 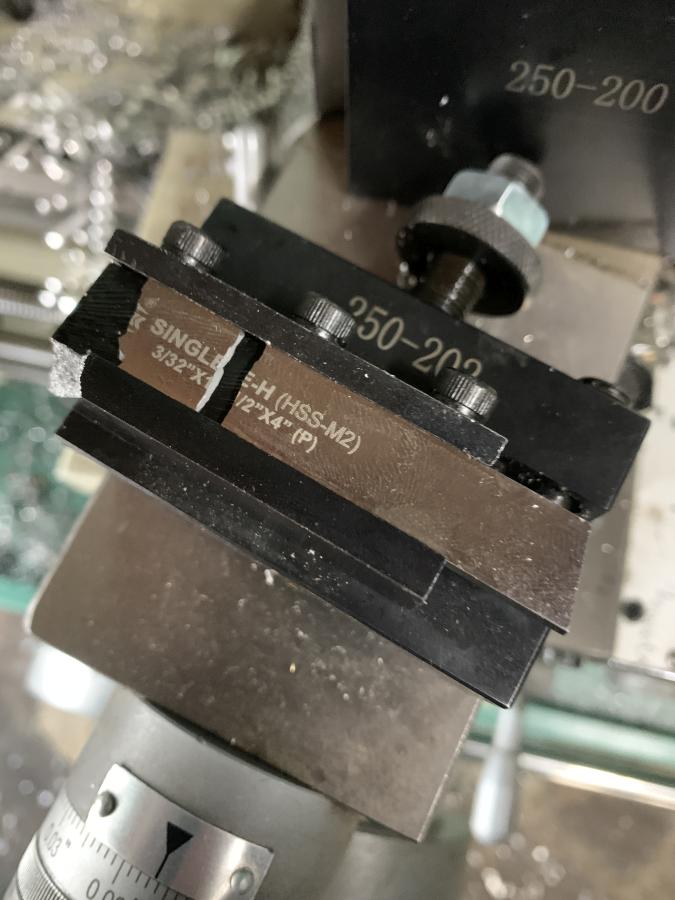 That’s what’s left of my parting tool, after it caught and the machine ripped it apart. You can see at the lower left where the corner just popped right off. And the steel of the tool crumbled. 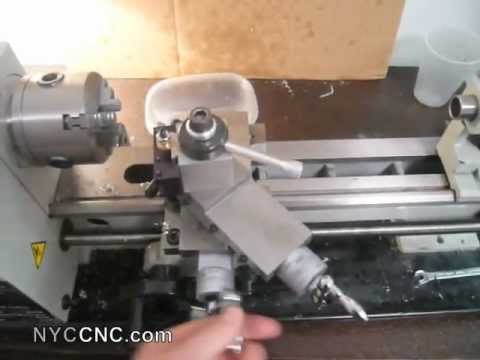 It’s all attention to detail, with this, and that’s where I screwed that little bit up. I forgot to check and set the height of the tool relative to the center of the work-piece – a parting tool is supposed to be a tiny bit below the center. If it’s not, it can catch and then that’s what that looks like. I’m fairly sure that some of you readers are clutching your temples at my stupidity but, hey, I’m like Joe Rogan – I never said I was smart, right?

I also didn’t get a picture of the set-up with the compound, which is a bummer and blogging malpractice. A compound on a lathe has a lot of purposes, one of which is cutting at an angle from the cross-slide – you can do tapers and bevels and stuff like that with it. 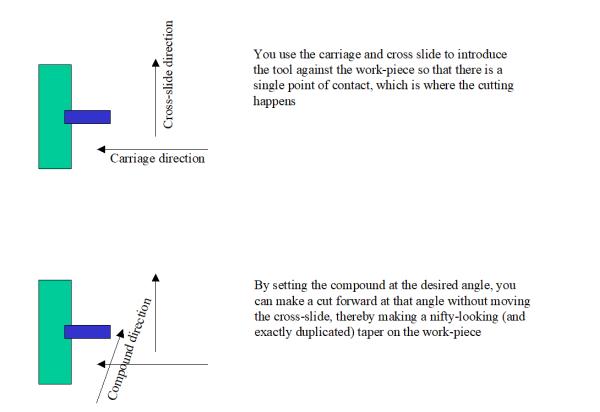 I set my compound at 7 degrees off the cross-slide, which is the traditional bevel-angle for shower escutcheons. One neat thing about using the compound is you set it up, tighten it down, and go ahead with the cross-slide until you want the angled cut. Then, when you do the next piece, it’s still set up where you want it and you can exactly match the cut. 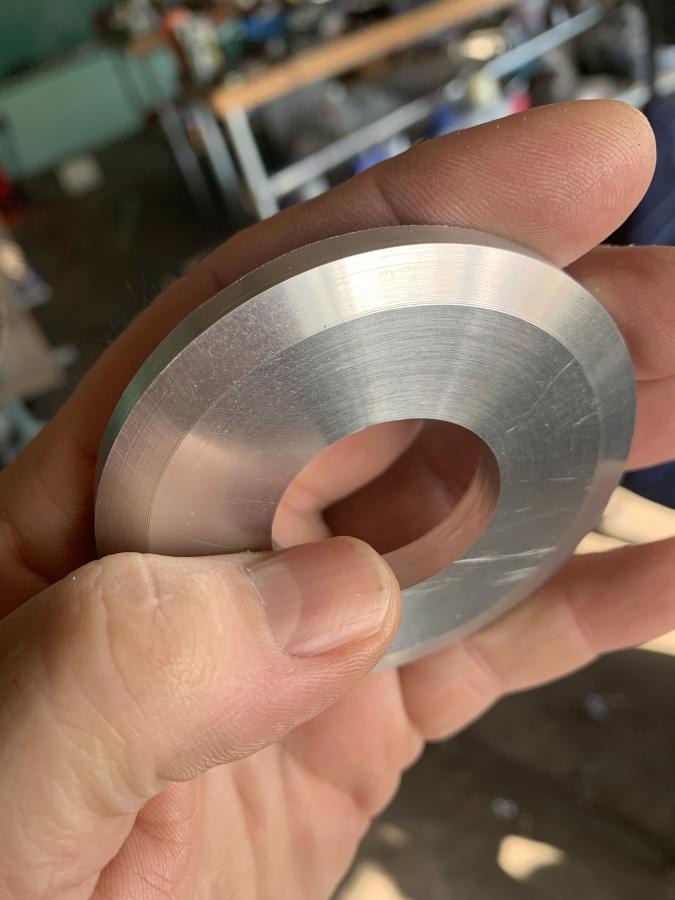 Another thing you can see is a fairly typical oopsie – the curls of swarf coming off, at some point or another, made marks in the face of the work-piece. I’m not sure what I should have done, there. I’m not getting any part of myself near the machine to grab the swarf away and I don’t think it seems like a good idea to be spinning the machine up and down a lot, just to clear the ribbons off the cutting tool.

After blowing my parting tool apart, I didn’t have a great option for removing the work-piece so I just put it on Mr Happy Dancing Bandsaw: 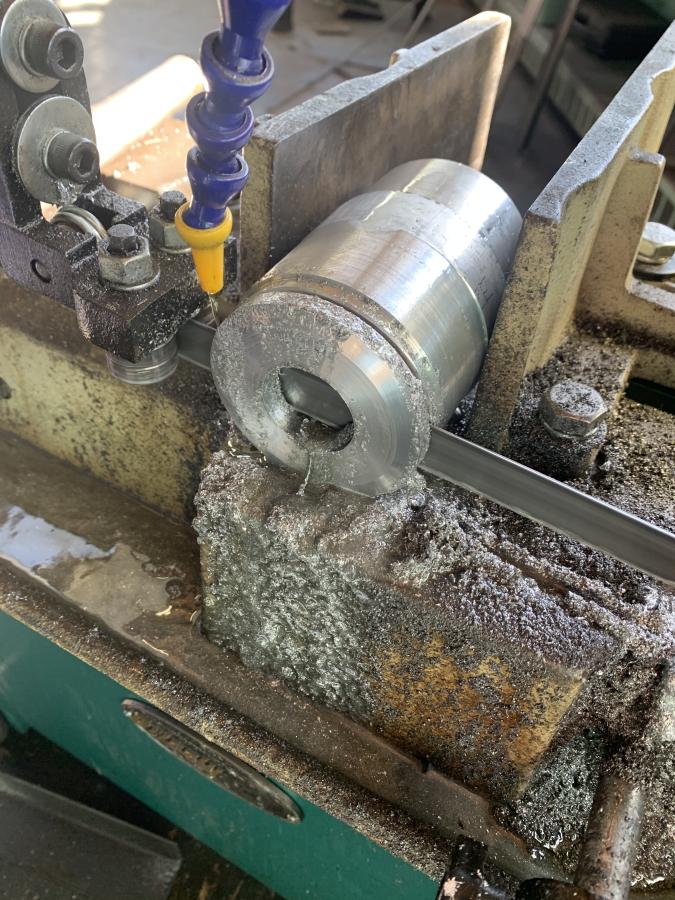 I was careful to be prepared to catch it when the saw completed the cut, since I didn’t want the aluminum to hit the concrete floor and ruin those nice, crisp, edges. Edges that can cut you. Just what you want in a shower. (I de-burred them with a file later) my knife-grinding belt sander made short work of cleaning up the backs where the bandsaw did its thing.

Since I took the stock out of the lathe, I had to skim a bit off the surface to get it concentric again, which means that one of the escutcheons is 2/1000th smaller than the other. 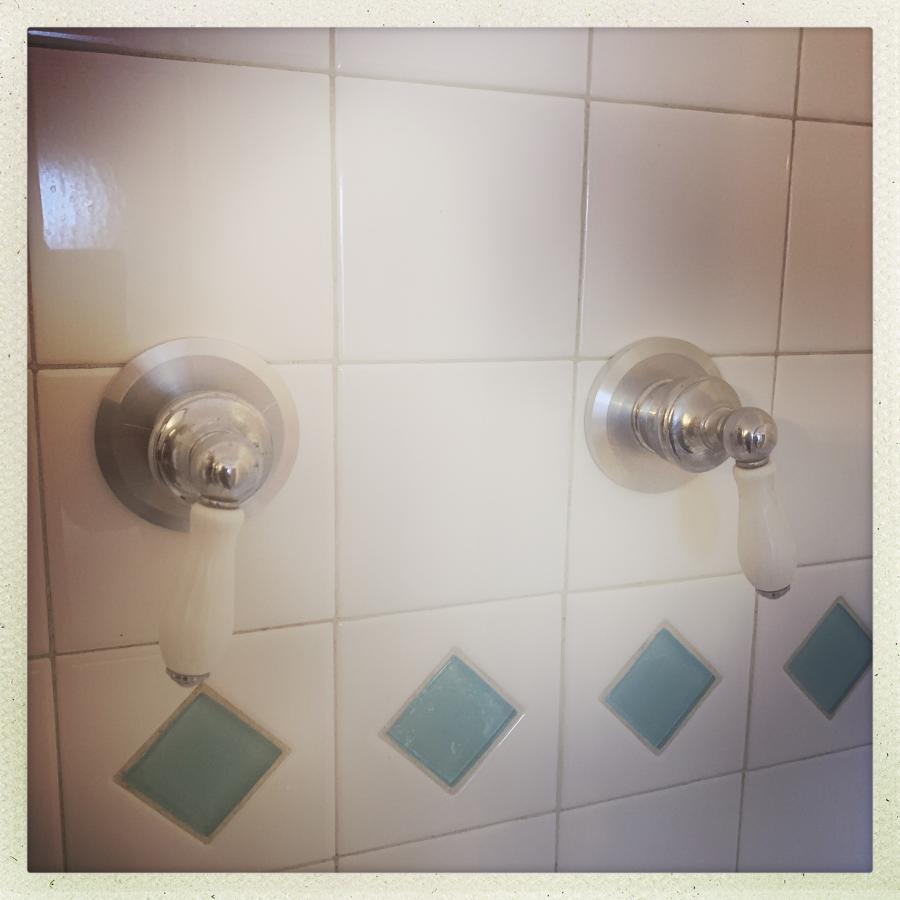