Fascists in the US government are trying to legislate against teaching truths such as: The US is systemically racist.

The reason that they don’t want such things taught is because once that truth has settled in, there is a mandatory follow-up question: “what are we going to do about it?” But that conceals another question, which is assumed, “is that a good thing, or a bad thing?” I.e.:

That’s the problem, for them – to teach certain things means inevitable calls for change. I.e.:

When a person comes to realize how severely every aspect of US society is tilted toward white supremacy, they have confronted systemic racism, and they either have to shrug and accept the status quo or reject every aspect of US society. So, trying to control what is or is not taught is directly related to the kind of stupid bullshit we encounter for example, when Florida politicians ban discussion of the idea of climate change causing flooding. In my opinion, it’s a terrible strategy to try to suppress specific ideas because really the supression attempt amounts to raising a flag over a particular idea saying “hey, look, we’re trying to hide something!”

So, in honor of the fascist US politicians who want to short-cut discussion of ideas like “the US is systemically racist” I’m going to do something unusual – I’m going to re-promote one of my earlier postings from 2016 around the time I started this blog. [stderr] If you or someone you know encounters republicans trying to say “there is no systemic racism” you should be able to respond, “Are you kidding me? It’s all systemic racism! The whole country was founded because of racism!”

I’m going to recap the argument, but I’d like to also encourage people to read the original piece. In my opinion, it is the highest point of anti-American speech I have been able to muster. The argument goes like this – when the founding secessionists began pushing for the colonies to rebel against British rule, they had multiple reasons. Those were, not in any particular order: taxation, the military occupation that inevitably resulted from British wars against France, being fought in North America, and regulation of the colonial economy. That regulation took the form of taxation, but taxation needs to be interpreted in two ways: one it’s a way for a dominant power to extract money and two it’s a way for a dominant power to control and subordinate the people that live under their economic umbrella. For example, today, alcohol’s value is severely distorted by regulatory taxes, arguably to raise its cost to the point where people can’t be hammered all the time. In other words, the colonies decided to seceede because they didn’t like the British bossing them around and taking their money. The “bossing around” came to be enshrined in the declaration of independence as “freedoms” and the complaints about taxation were (dishonestly, it turns out) tied to “taxation without representation.” I say that was dishonest because apparently the British were willing to discuss allowing the colonies to be represented in parliament but that wasn’t good enough; the Americans were accustomed to ruling themselves and really didn’t want to be ruled by anyone else anymore.

The claim that the British were interfering with American “freedoms” is the complicated one to pick apart. The founding secessionists did not quite enumerate the “freedoms” that the British were infringing. Rather obviously, the British weren’t controlling their freedom of speech – they were quite freely running their mouths, nor were the British controlling their freedom to do business – the US was a thriving and successful set of economies. Basically, the “freedoms” the British were infringing were the American’s wealthiest citizens’ “freedoms” to be a bunch of tax-cheat smugglers and slavers. There, I said it. Slavery. See, the problem that the Americans faced was that building an economy on slavery is like running nitromethane fuel in your car: it sure does boost the hell out of it, until the engine disintegrates from the stresses created by all that extra power. Put another way: making people work for free is one hell of a great way to build a capitalist economy; it’s the ultimate “buy low, sell high.” 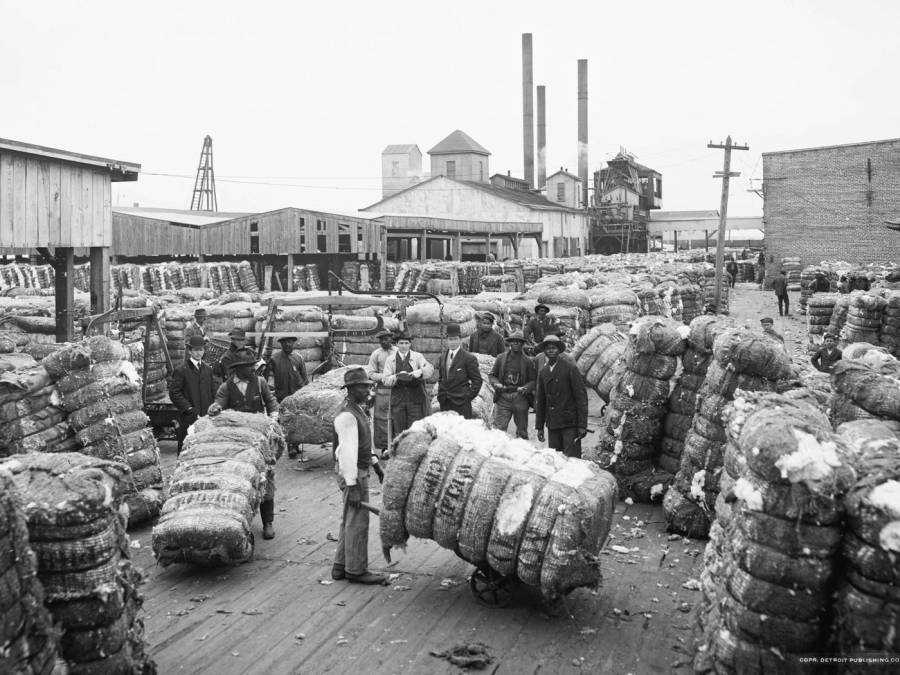 Big Cotton: notice who is working, versus who is standing around looking pleased with themselves. Those bales are heavy.

By the time the US colonies’ wealthy started pushing for secession, slavery had metastasized and was fundamental to every aspect of the colonial economies. It’s a popular, and wrong, thing to say that the southern states’ more agrarian economies were tied to slavery but the industrialized north was not – the fact is that the industrialized north was, too: they were getting huge bales of cotton from the south and making it into fabric to sell at a crazy profit because the raw cotton’s price was artificially depressed by the fact that southern labor, which was slave-based, was cheaper than it would have been in a non-slave economy. See what I mean about the nitromethane? Also, the fact that there was slave labor as an option served as a lever against non-slave laborers: if wages threatened to go up, a business could threaten to move to a southern state and just outright buy unpaid labor, so the laborers had better accept the pittance wages they were being offered, or else. In other words, the same trick that US capitalists play today, where they threaten to export jobs to China where labor is cheaper, was an inter-state commerce issue instead of an international issue.

The “freedoms” that the British were taking away from the American colonists’ wealthiest citizens was the “freedom” to run their economies the way they wanted to – which inevitably meant regulating slavery. And regulating slavery only meant one thing: abolishing it.

What most American fascists cannot look at is the fact that slavery became illegal in England in 1772. The Americans rebelled for their freedoms in 1776. Four years later – four years during which there was increasing foment and furor. About “freedoms” that remained largely unspecified and un-enumerated. Why did those freedoms remain unspecified? Because they were fucking repulsive. It’s hard to write a declaration of independence based on highfalutin’ enlightenment-sounding ideals about freedom when what you really mean is “they want to make us stop smugglin’ and slave-tradin’ damn it.” It was, as I pointed out before, a rich man’s rebellion. George Washington, the figurehead, was America’s greatest land speculator and personally owned a significant chunk of the country. He was interested in not paying property taxes and was willing to kill to maintain that status quo. Jefferson was a slave-owning farmer who was also incompetent at it – he would have lost his pot to pee in and his dick along with it if he hadn’t had a source of inexhaustible 100% profitable labor. Richard Henry Lee, Robert E.’s great-grandfather was a massive plantation-owner and of course his plantation ran on slavery. The entire plantation system had to because the profits of the enterprise depended on not having to pay labor costs. 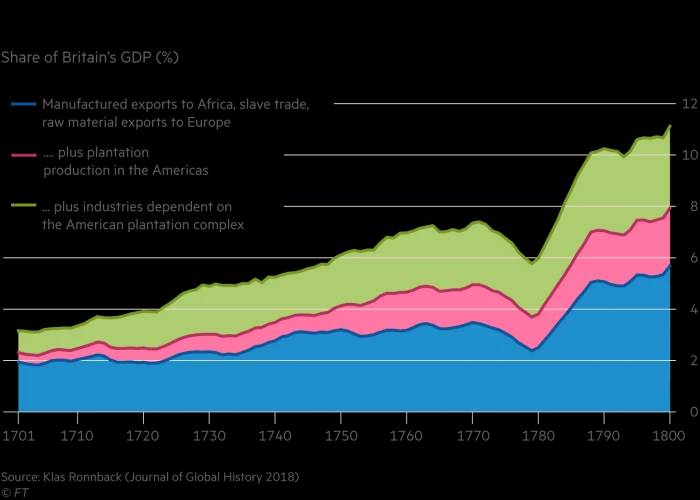 In 1772, American oligarchs were staring down the barrel of a cannon. They were going to have to completely re-structure their economy, or … do something else. And they chose to do something else. Ultimately, that “do something else” choice amounted to kicking the can down the road for another few generations, i.e.: Robert E Lee had to go lead a bunch of dumb southern kids to die in battle to uphold great-grandpappy’s decision to not farm, himself. That decision has been re-played again and again in a deadly and immoral rear-guard action in which the controllers of the US economy have fought tooth and nail (and with guns and bayonets) to keep from having to re-structure their economy in order to pay fair labor costs. Meanwhile, it bears mentioning that the tax-rate in the new United States was higher than in Britain within 2 years of the country’s founding. Why was that? Because they couldn’t tax land or slaves so they had to figure out ways to extract tax revenues from the little people. Within a few years of leading his successful rebellion, George Washington had to raise an army to suppress an internal tax revolt (that, literally, took place in my neighborhood) because of Alexander Hamilton’s genius idea to tax only small-time alcohol distillers – i.e.: local economies – while preserving the low-tax status of larger distillers. The world and the citizens of the US should have figured out that the country was a scam the second the drums started beating to suppress the Whiskey Rebellion, but they didn’t.

After 1772, the British had to, unfortunately, repeatedly ban slavery. I.e.: “That thing that’s illegal? It’s now illegal-er.” Part of the problem for them was that the new United States was still running a slave-based economy, which meant that it was distorting global prices and acting as a premier customer for criminal goods, i.e.: stolen people. In an irony matching that of Washington (“no taxation without representation”) crushing the Whiskey Rebellion and Shays’ Rebellion (a straight-up tax revolt) the US formed its first navy “millions for defense but not one cent for tribute” to stop French ships from impressing American sailors (“impressment” is basically nautical slavery) and the US first flexed its military muscles against the Barbary Pirates who are called “Pirates” in the US but were, in fact muslim slavers who were in the habit of raiding and enslaving white people and that was unacceptable.

If you care to review my old posting (again, that’s [stderr]) and desire to comment on it, please comment here, on this posting rather than on the 5 year-old comment thread.

The Financial Times article I linked above: [ft] is really interesting. Yes, Britain’s GDP was also being dragged in a very positive direction by American slavery.

Hilary Beckles recalls when he was a child that “it was normal to see a 15-year-old white boy on a horse driving 100 black people to work on the plantation”. Such social and economic legacies of slavery are inescapable in Barbados, a former British colony. In the UK, however, they have been “brushed under the carpet”, says Sir Hilary, vice-chancellor of the University of the West Indies.

That is why the British had to keep passing laws against slavery, even though it was officially stopped in 1772, there was just too much money to be made.

I do feel obligated to disclaim that this would be considered:

My view is that the historians I think matter, would probably agree with my take, though when I have discussed it with some of them (most notably my dad) “it’s more complicated than that.” Well, of course it is, my reply. The point of history is to boil down the complexity of a time and events and extract and shape an analysis of what mattered and what happened and what’s important. A Marxist economist would doubtless have a very different view of what happened during the US revolution, and would couch it in terms of labor costs (as I did) but would probably not have a decent explanation of the impact of slave labor on the economy because Marx wasn’t concerned with slavery because there wasn’t any, where he lived, when he did his thinking. So if you wish, accept this all as my opinion.