The US political system is incredibly corrupt. There are perhaps a few mere millionaires in congress, but they’re the tip of an iceberg made of shit – it’s their children or spouses that are grabbing money hand over fist. I remember back in the 90s when the US media was all a’cry about the corruption of Saddam Hussein’s children, but they were ham-fisted amateurs compared to the Washington set.

My loathing is bi-partisan – let me say that for the record.

Did you notice how the discussion of Hunter Biden sort of opened, sputtered, and fell silent? The question immediately shifted from “Is Hunter Biden corrupt?” to “was the way the republicans were trying to ‘out’ him dishonest?” The discussion became about republican dishonesty, and the fact that Biden was offered a series of high-paid jobs because his last name was ‘Biden.’ He wasn’t on Amtrak’s board because he knows anything about running commercial rail service, and he wasn’t on Burisma’s board because he’s an energy trading expert: he’s a Biden. The republicans’ dodgy reasoning was to position themselves to criticize Hunter Biden for corruption without calling what they, themselves, do all the time, corruption. That’s why it didn’t work. But the scandal of the whole thing is that once it didn’t work, everyone went back to business as usual.

$50,000/month is sleazy money. It’s chump change for someone like Paul Manafort, but it’s a “living wage” if you’re a mobster.

Or take Joe Manchin – the clown who pretends to be a deficit hawk and/or concerned with people’s rights. [vf] His “stubborn commitment to bipartisanship” looks more like an attempt to position himself as a middle-man. His daughter is a corporate executive who cashed out with $30+mn on a merger deal – nobody’s asking how she qualified for the position. And Joe’s holding equity in coal companies whose interests he is in a position to affect. When you read about this, it’s portrayed as not particularly corrupt because it’s small-time corruption compared to others in Washington. Oh, well that makes it all OK then? The Washington machine isn’t going to attack Manchin because what he’s doing is what they’re all doing and exposing it doesn’t make them look good, either. 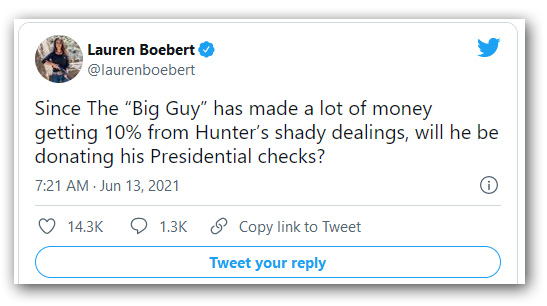 From the “I know what you are, but what am I?” department, we have Lauren Boebert, implying that Joe Biden gets a share of his son’s corruption. That’s absurd, of course, since Joe’s “rich enough” for all intents and purposes, and has made a ton of money off the usual book deals and speaking engagements – he doesn’t need to wet his beak in Hunter’s cup.

By all means, we should be calling the Hunter Biden $50,000/month influence peddling scheme “corruption” – and oh, hey, Boebert’s husband, who ran a restaurant with her, has been making $400,000/year for the last 2 years as an “energy consultant.” [wapo]

She suggested her husband also did some consulting, listing “Boebert Consulting – spouse” on her candidate form, but identified his income source as “N/A.”

Only now, with Boebert not just in Congress but on the House Natural Resources Committee, has she revealed that her husband made $478,000 last year working as a consultant for an energy firm. He made $460,000 the year before, she disclosed in a filing Tuesday with the House of Representatives. Her husband, Jayson Boebert, earned that income as a consultant for Terra Energy Productions, according to the filing.

Of course they’ll get away with it – that’s petty graft for Washington. But it’s “influence peddling” not “consulting.”

Yes, this is a generic problem in politics; corrupt politicians sell their attention to anyone who wants to be able to drop an idea or two in the right ear. It’s probably impossible to eradicate corruption, but we shouldn’t just nod and shrug like we do. Washington is a cesspit of corruption – and they point their fingers at Afghanistan and say “corruption got in the way of our nation-building.”