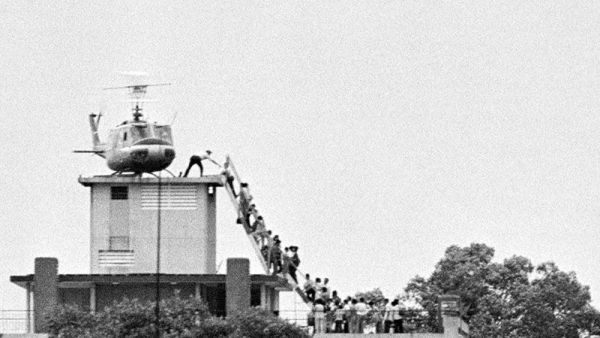 It’s not as though that particular scenario hasn’t played itself out in Vietnam, Iraq, etc., before. I do not say this approvingly, but, “what exactly else the fuck did you expect?” When someone decides to align themselves with an occupying power, whether it’s the US, or Rome (see what happened to Camulodunum) or Nazi-occupied France, pay-backs are on the menu once the occupier leaves. I’m not blaming the victim, but anyone who decided to align with the US puppet government ought to have expected this: “The last helicopter out of Saigon scenario.”

But, when there’s a bunch of people leaving someplace, one of the helicopters (or whatever) has to be the last one. There is always a “last one” and it makes me wonder why those people standing in line didn’t see the US failure in Vietnam about 2 years before that evacuation, and quietly leave when it was more convenient. It doesn’t require a gift of prescience to see that the US was going to lose – it loses every insurgency it gets into except the ones where the Native Americans, trapped within its continental boundaries, had no logistical life-line – it was foolish to expect anything else. The war in Afghanistan was over when Bin Laden (who was only there as a not-exactly-invited guest) escaped into Pakistan during the fumbled attempt to nab him in Tora Bora – he literally walked out right past America’s finest special forces; Afghanistan’s terrain is like that. [Remember when Rumsfeld was talking about Secret Mountain Cave Fortresses like something out of Marvel Comic Books? What a visionary. What a jackass.]

It is exceptional foolishness that the jackasses in Washington are pretending that they have only just now realized that their followers are going to be slaughtered. Around about the time when everyone realized that the US was losing (around 2005?) the US should have been making plans for how to wind down their efforts, and how to protect their followers – or, failing that, to warn them “now would be a good time for you to start leaving” 15 years ago. And now the jackasses in Washington expect us non-jackasses to imagine that we’ve only just now realized it’s a problem? I get pissed off at the realization that that’s how stupid they think I am.

Washington’s failure to plan effectively does not an emergency make. It just reveals not incompetence, but the fact that they never gave a shit and never will.