As you may recall, I have been planting evil plants back in the strippings. And I rather stupidly forgot to take into account a local Pennsylvania custom: the beer-addled ATV-ride through other people’s property, prior to going and setting off fireworks.

To be honest, I did not listen for/try to intercept them because in these times, in this place, there’s a lot of gun-toting and attitude going on. I don’t want to face-to-face confront a bunch of jackasses on ATVs. I’m left with damage assessment and being glad they didn’t set anything on fire. 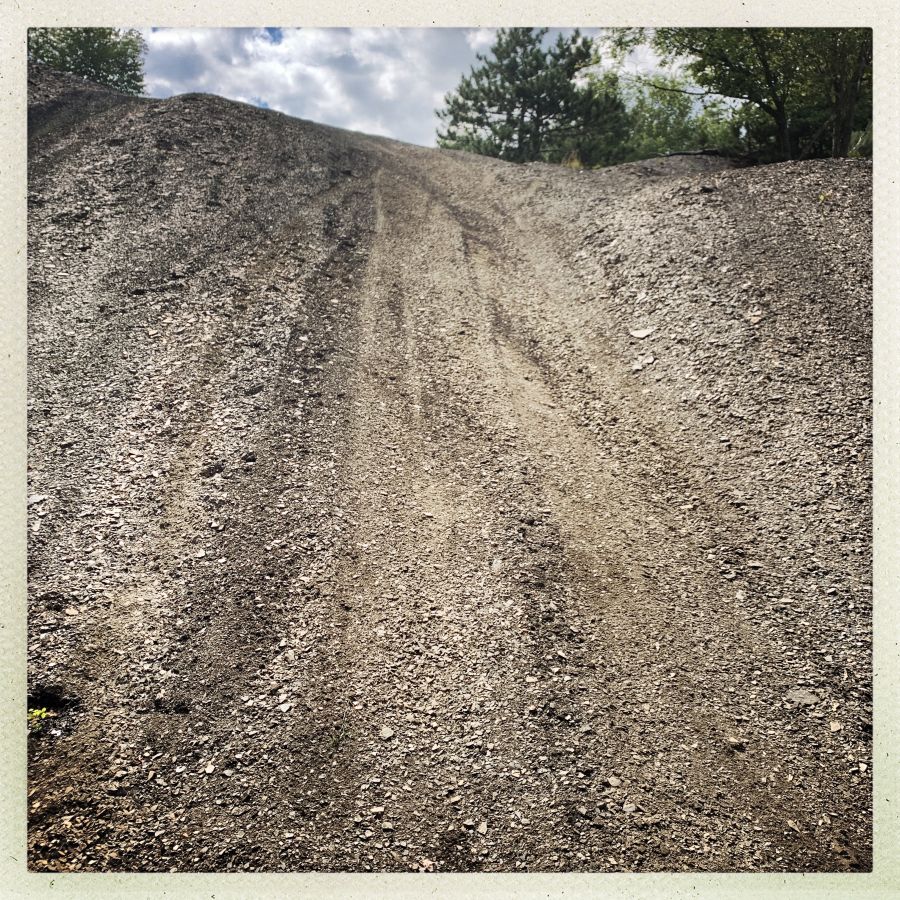 As you can see, the strippings are pretty friable; an ATV’s tires shred the ground and throw it everywhere. That’s why it’s so “fun” I suppose.

If you look at the picture above you can see the sole survivor of the black locusts; there were 2 or 3 in the middle of what is now an ATV trail. There are some survivors and seeds and some bamboo stands starting to establish, but there’s not going to be any progress until I put up some fences. ATVers out here feel no remorse about going home and getting tools then coming back and destroying your fences, or tearing down your signs. So this is wasted work. It’s all wasted work.

And, as amusing as it is to think of making caltrops, etc., I don’t want a bunch of broken-down ATVers, pissed off with nails in their tires, back in my property. That’s inviting getting rifle bullets through my house. I want to ante up but carefully.

Perhaps when it gets cooler I’ll buy some rebar and wire fence and put some strategic fences here and there. Of course they can go around, but if I catch someone back there, who has just driven around a big fence that says “NO ATVS” it’s a bit harder for them to plead ignorance. There’s a lot of ignorance, since this is mostly a republican zone, so I’m not sure I can pump to the bottom of that reservoir. Mostly, if I can get some fences up until the bamboo establishes itself, I’ll win in the long run.

I do find it ironic that, here in Pennsylvania, where the politics lean republican/libertarian/fascist/racist, property rights are hailed as one of those constitutional thingies that – you know, like the 2nd Amendment – are held up as one of the great things about America, and then those same individuals are pretty shameless about despoiling the property of a land-owner. It’s probably a <i>gekokujō</i> scenario: class struggle by ATV trespass. Except nobody’s property is untrammeled. 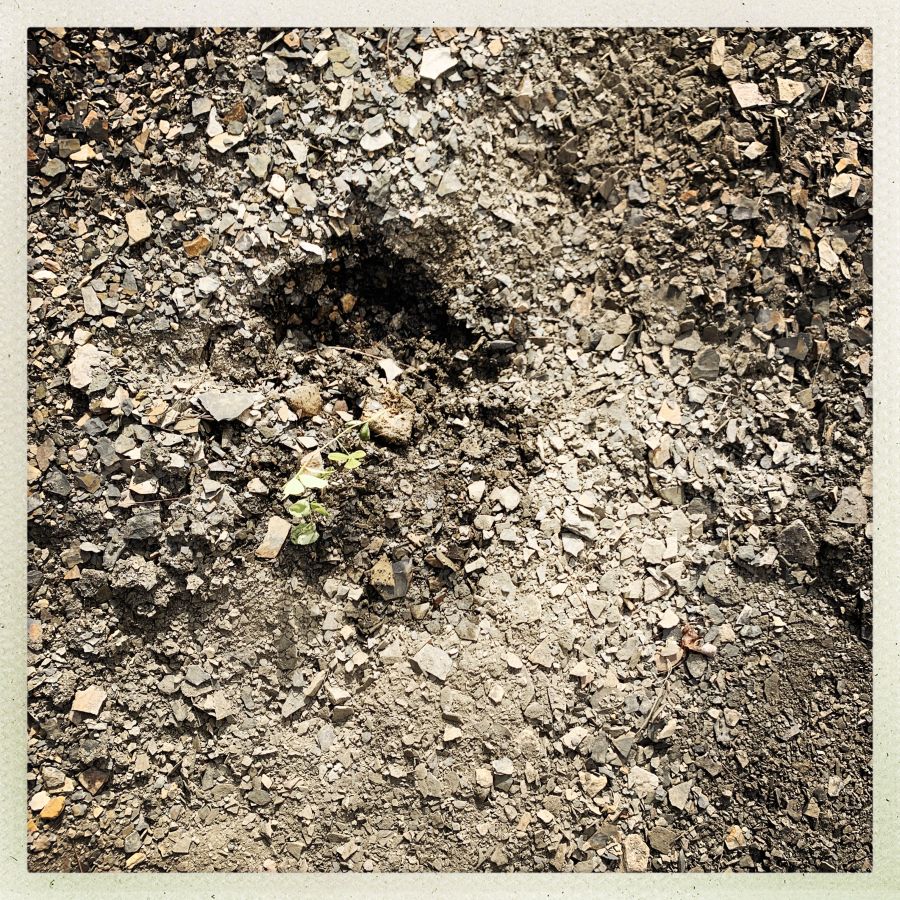 It’s dehydrated because the stalk was broken, not because I haven’t been coming out to water them. This one is also toast. I have a bunch of seeds left and I think I will just broadcast them on the main slope.

Yesterday I had a pretty messed-up day. My neighbor over at the school had volunteered to help me with a post hole digger (the closest I get to a PhD!) and replace the posts that I put up 5 years ago, to make a gate across the driveway there. I didn’t do a very fancy job with the posts because I figured nobody’d mess with them, until some drunk decided to explore up the driveway and bent the posts with their car pressing against the cross-cable. So now they’re at an angle, which means I have to shorten the cable or …. screw it: “let’s do it properly!” says Marcus. Since it was going to be hot, I got up early and ran to the rental place to get the post hole digger and we got busy. Except I hadn’t had any breakfast and was a bit dehydrated, and the temperature began to scream up toward about 90. Yeah, I know that’s wimpy stuff for those of you who live in Hell, USA, but none of us here are accustomed to that. So I started getting wobbly as the post hole digger kept beating the shit out of me – the handles were right where my diaphragm is, so whenever it hit a rock it was like getting punched in the lung. That sucked. Then everything started getting spots and tightening down and I found a nice patch of grass and went prone. Mark, my helper, poured water on me, gave me more, and got me sitting up, and I eventually stood and then, really, whoo boy, my body went “get all this stuff out of me!” and I was puking up the water and generally being a mess. Eventually I got into the building where it’s cool and lay on the floor in front of a fan and ate some chips and a sugary drink or 3 and I was able to finish the job by attacking it a bit at a time.

4 holes 3 feet deep means 2 50-lb sacks of concrete per hole, so we decided <i>not</i> to do all the holes yesterday (besides, I didn’t order enough pipe from Grainger) and I went into town, pressure-washed the auger at the car wash, and returned the PhD. The guy at the rental place looked at it and said, “that’s the … cleanest auger I’ve ever seen.” Then I bought and loaded 400# of concrete, took it back, set up my hod, and started mixing and shoveling. When I was a kid in the summers my project was usually to mix the cement while mom and dad cemented stuff – to me the water flowing through the cement was like some kind of fairy-land disaster, so it was always fun – I took my time, mixed and shoveled, and called it a day around 4, then went home for a much-appreciated shower. So, that’s why no blog posting: I was busy being an ass. 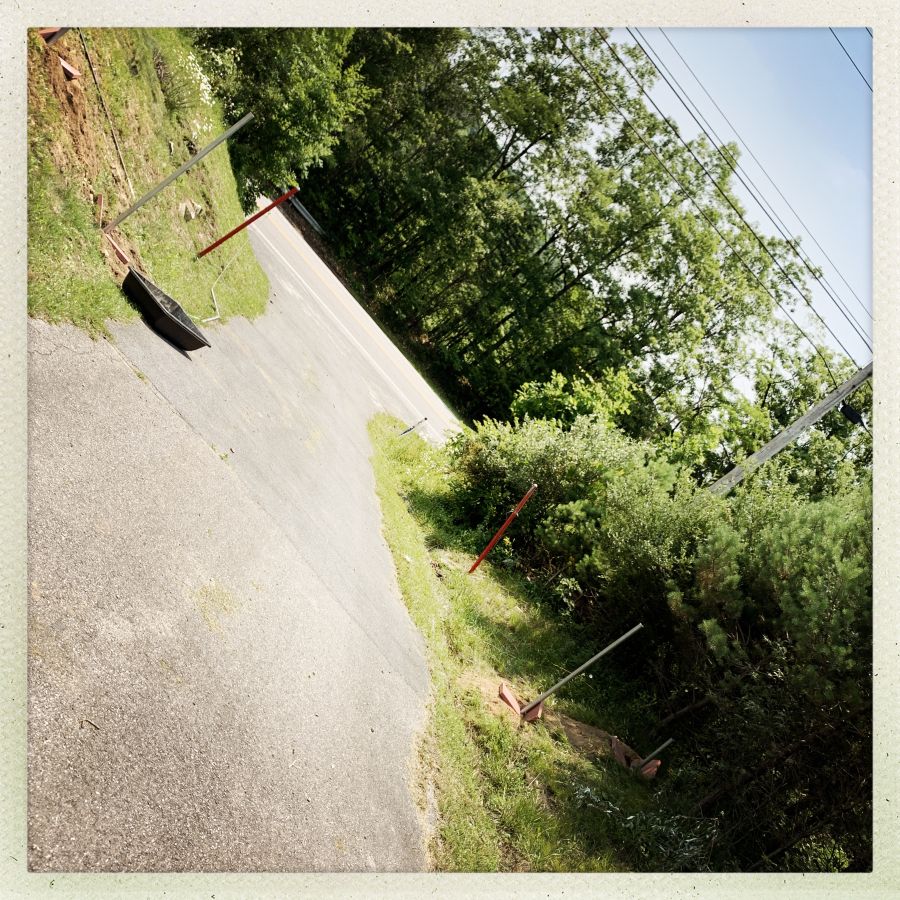 The red posts are the old ones and you can see they’re a bit bent. The new posts have an anchor and will have an angled piece. If I need to adjust the front post I can tap the angled piece down a bit. That’s galvanized schedule 40 pipe – anyone who hits that with a car is going to be unhappy with what it does to their car. Next design will feature a different cable system, too, so there will be a few chocks and a padlock near the middle where a car will encounter it if they go up the driveway.

On the left you can see my hod (yes, that’s the word!) and rammer. To level the posts I used a try block and a 1920s vintage Starrett machinist’s level. Maybe that was overkill. But unless the planet’s center of  gravity changes a lot, those posts are vertical. They’re not perfectly horizontally matched but I did put a laser on the try block and check the dot on the peer pipe, then tapped the taller one a couple times with my forging hammer. 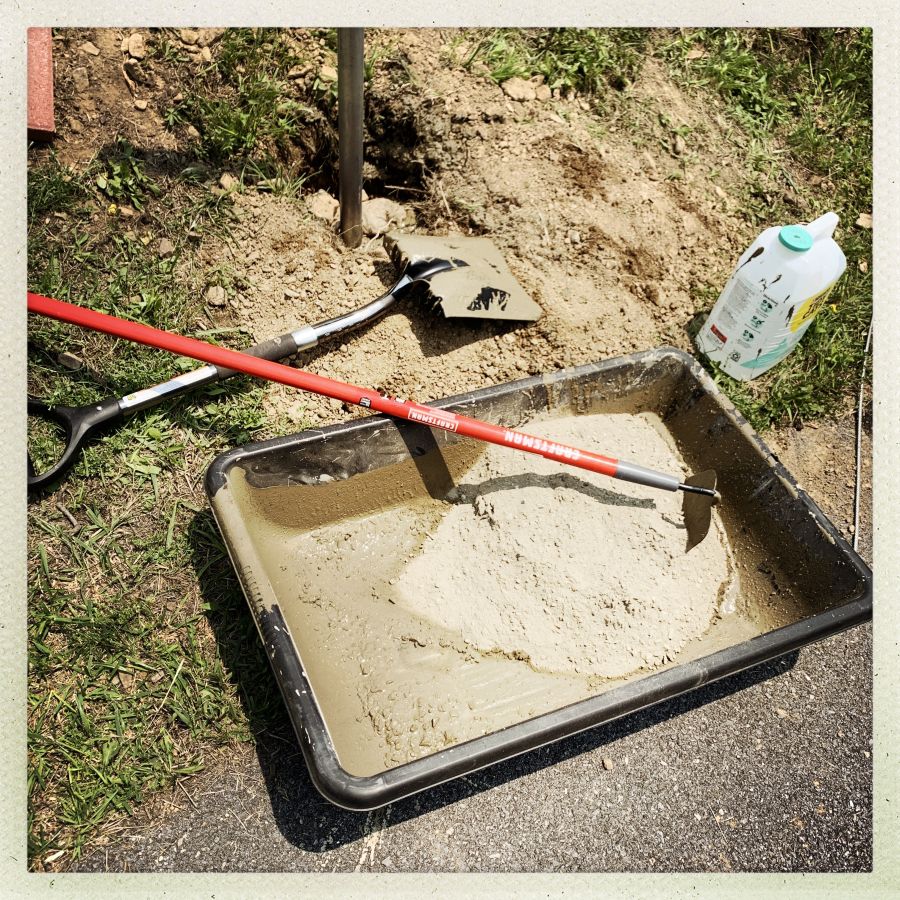 Because of the location, I had to carry water, which wasn’t too bad – I used 3gal jugs and only had to carry them about 100 yards.

Yesterday was the 4th of July. I thought about posting Frederick Douglass’ great July 4th speech, which pretty much explodes the united states, but I was sure that Douglass would get the job done, himself. He’s been doing great work, lately.