I mentioned this in the comments of my last posting, but I think it’s worth going into a bit more detail.

The Guardian [guard] carries the story, but I first heard it on an interview on some podcast or other. I forget which. The interviewee was a First Peoples’ spokesperson who, as many of them are, was very thoughtful and funny and interesting to listen to. But, let’s go with The Guardian‘s reporting for simplicity:

The scrubby, vacant patch beneath the Burrard Street Bridge in Vancouver looks at first glance like a typical example of the type of derelict nook common to all cities: 11.7 acres of former railway lands, over which tens of thousands of people drive every day.

This is not any old swath of underused space, however. It’s one of Canada’s smallest First Nations reserves, where dozens of Squamish families once lived. The village was destroyed by provincial authorities more than a century ago.

This is a marginalized community saying, ‘This is how we’re creating value for our nation, and the public at large’

Now it may rise again – but in radically different form. In an internal referendum on Tuesday, 87% of voting Squamish Nation members approved the construction here of what may become the most dramatic statement of urban Indigenous presence in any Canadian city – a new district called Senakw, after the long-displaced village, with 11 towers, 6,000 dwelling units and more than 10,000 residents.

It’s actually a whole lot cooler than it sounds. The lands that the First Nations are winning back, legally, are some of the most valuable pieces of Vancouver. Note that, in spite of some victories, it’s not very likely that white people will just give back “Millionaire’s Row” in Vancouver and let its original owners build on it.

I find these things fascinating, as they unfold, but I feel bad because I know that behind my fascination is real pain. The Guardian‘s words “long-displaced village” sounds so clean. You know, as if the villagers picked up and left because they decided “this place we thought was a gorgeous place to live, we want to give it to the white man” or something. The problem was, as usual, that the white man also thought it was a gorgeous place to live, and they’re violent motherfuckers, white people are; there’s something wrong with them, I think. Maybe it’s the shape of their skulls.

Though the original village here was ostensibly a protected reserve, government and industrial interests chipped away at it. In 1913, the provincial government coerced the remaining Squamish residents into selling their land, placed them on barges bound for the north, and razed the village. For a time the area became a squatter’s camp, and was surrendered altogether by the Squamish nation in 1947.

“Chipped away” is a really nice way of describing ethnic cleansing. Ethnic cleansing is a really nice way of describing genocide and culture-cide. When you displace a culture from the lands in which it arose, you irrevocably change it, and you leave footprints that will reverberate down through history, inevitably. Even attempting to remedy the situation changes the situation for others, and everyone is stuck in a balance of resentment, fear, and greed. “Surrendered” sounds like such a nice way of saying “driven off their land” – land which, we all agree, is a beautiful place to live. I’ve been to Vancouver and I wouldn’t mind coming and clearing a few blocks and building a big house, maybe have the former residents build it for me and then tend the fields and make me sushi after I was comfortably installed. Put that way, doesn’t that sound fucked up? You bet. But I’m white, and that’s how we think and there’s something wrong with us. Maybe it’s the shape of my skull. 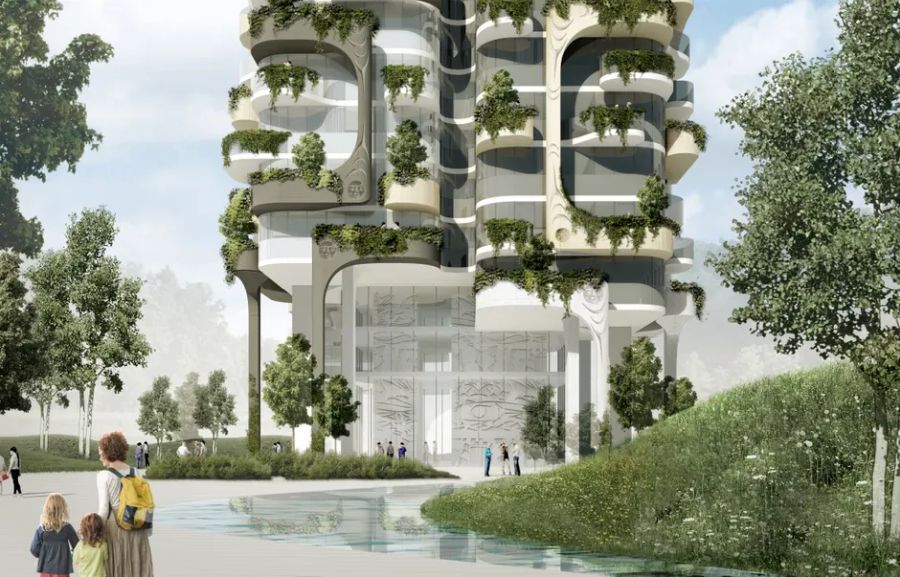 That’s an artist’s rendering of what the Squamish want to build where millionaires’ mansions stand.

A conversation I have sometimes had involves The Queen of England. I was in Canada, doing a talk in Montreal, once, and asked one of the Canadians why they still have the queen on their money. “Why not something beautiful, instead of an old lady?” It’s interesting how people think about the queen. For many of us USAians, the queen is a cute oddity – sort of a very old Kardashian without plastic surgery. For all I know, that’s a Canadian attitude, as well. But when I was listening to the Squamish fellow on the podcast, he referred to “crown lands.” What’s that?

Crown lands are personally owned by the queen.

WTF!? I understand that the queen’s not really the “owner” in the sense that she can’t just sell off a chunk, except that she sort of can. And the queen, personally, owns 80% of Canada. 80% of Canada is “crown lands.” Please don’t anyone, ever, tell me that the queen is a “figurehead” without real power, yadda yadda, any more. Land is power. And the queen, which is a typical behavior for her blood-line, is a grasping, hoarding, land-grabbing monster. She may have a cute exterior but, if I understand this correctly, she’s saying all that is hers because her daddy died and left it to her. For one thing, you can be damn sure she didn’t pay any inheritance tax on it, right? If anyone ever wants a perfect illustration of the toxic harm that monarchy does to a civilization, you have no farther to look than Canada and the queen. She’s probably responsible for poutine, but I’m not even going to research that question.

Let me frame this another way: give it back. Her granddaddy stole it. She knows it’s stolen. give it back. I wish I had Jeff Bezos money because I’d sponsor the biggest set of lawsuits against the Gotha-Saxe-Coburg bastards who stole Canada and are knowingly transferring stolen property from one generation to the next, in their great big monarchial power-scam.

I just had a horrified thought: does that dried up old monster own Australia and New Zealand, too?

New Zealand’s Crown estate includes some of the most iconic land in the country, ranging from South Island High Country pastoral land to bodies of water such as lakes Wanaka and Wakatipu. As the Crown’s land manager, we are the guardians of eight percent – around two million hectares – of New Zealand’s land area.

How can this be? Yes, I understand that the queen is only the nominal land owner and the government is basically the land owner, but that old fangless monster ought to trigger a constitutional crisis and give it back. Maybe not all of it, but it is stolen fucking land, you monster!

Before the French Revolution (the Vendee) Louis XIV the king owned 70% of France. The Catholic Church owned another 10%, the nobles 9% – and they were pissed about that. The People owned nothing, basically. The kingdom of France was a great big scam, but at least it was land that was acquired in the traditional way hundreds of years ago – by the simple expedient of French people clobbering other French people and acquiring their land. The French people smartened up and guillotined a remarkably small number of nobles (about 3,000) and one of the side effects of that was a re-balancing of land-ownership in France thereafter. This whole thing of monarchial land grabs is ridiculous and out-dated and now we can see why monarchists still like it: the queen, that horrible little creature, has accepted stolen goods in the form of a big chunk of the planet. Her grandma thought she owned India. For no reason more than “because of whose daughter she is.” That’s it. The royals aren’t even entertaining, anymore – they don’t deserve any of this stolen land, in the slightest.

So, I was joking with this Canadian about “why do you still have the queen on your money?” but now my question is “why haven’t you guillotined those robbing bastards?” Because you all – everyone in Canada, New Zealand, Australia and the United States – you know it’s stolen land. Give it back. Or at least, say, 80% of the 80%.

If you want a new villain to hate: Elon Musk and Jeff Bezos are pikers compared to that white-haired vampire with the corgis.

I’m Going To Class! » « This is Beautiful: One Hell of a Political Ad