When you’ve got search-strings in place for F-35 news, you can’t avoid the chest thumping regarding Israel’s F-35 and their proven effectiveness.

They are pretty good at hauling bombs over Gaza, and dropping them on undefended buildings. Their state-of-the-art stealth and all the fancy touch panels and virtual reality helmets are, actually, useless. When you’re flying over and dropping bombs on undefended airspace, with civilian buildings and infrastructure being your primary target, you could probably fly the worst aircraft, ever (I’m not sure what that is…?) and still be “successful.” It’s like Mike Tyson being successful against PeeWee Herman, in a friendly boxing match: it might look fascinating on Herman’s resume but not so interesting on Iron Mike’s.

But, presumably in order to counter the many nay-sayers who criticize the aircraft as an over wing-loaded hangar queen, people with F-35s will go out of their way to make sure everyone knows that they actually got some use out of the damn thing. Remember: this is undefended airspace – big whoop.

There are many firsts involving the Jewish state and the F-35 Lightning II fifth-generation fighter aircraft. Israel is the first buyer outside the fighter jet’s nine-nation co-development group. While the deal was signed with the US in 2010, Israel received the aircraft between 2015 and 2017.

These would have been the ever-popular “it buys itself” model: the US gives Israel a bunch of money that is earmarked for F-35s, then Israel hms and haws and announces it has decided to buy F-35s. Then, the planes are delivered late and not meeting spec, but who cares about a thing like that?

This variant reportedly packs a lot more features than the American jets. They can be externally modified by the Israeli Air Force, part of which includes conformal fuel tanks that greatly plugs the aircraft’s much-needed capability gap of having a short-range.

Combined with drop tanks, an aircraft’s range can be significantly increased as has been done with most of their F-16 and F-15 fleet.

According to defense analyst Tyler Rogoway, a combat aircraft’s range is a huge deal for any nation, but for Israel, whose primary enemy remains Iran, it is a grave concern. Targets in that country can reach 1,700 miles from Israeli borders.

I discussed that back in 2016 [stderr] shortly after I started this blog: in military applications, range is either mostly a problem of logistics, or it’s the thing that kills you. Most of the time, it’s just logistics. For example, the Israeli F-35s can do their thing without having to worry about midair tanking or hauling drop tanks, because they’re flying in undefended airspace. 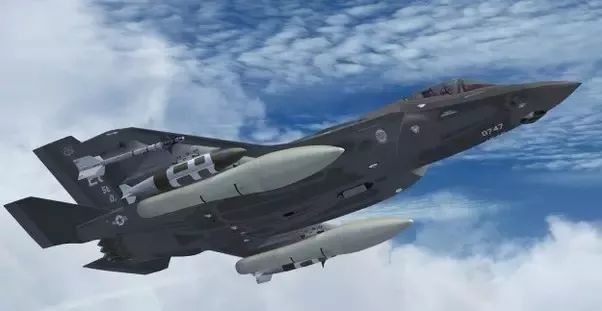 That’s an F-35 in “gimp mode” i.e.: it has buckets of rocks bolted underneath it, so it’s much slower, turns even worse, and has no stealth at all. In that configuration, it’s either perfectly safe because: undefended airspace, or it’s a sitting duck. What an amazing piece of military technology! Remember when it was supposed to “supercruise up to 2,000 miles? Yeah, it struggles to break the speed of sound and it has something like a 750 mile range without the strap-on vibrators (which increase the range and also decrease it).

“It is not clear exactly what such an apparatus would look like, or how it would impact the F-35’s low radar signature and already somewhat paltry kinematics. There is also the question of airframe fatigue induced by mounting thousands of pounds of gas where it was never intended to be placed. Still, the IAF’s lust for the extended range will likely trump these concerns,” he adds.

When I go to “damning people with faint praise” school, I hope I get in the seminars taught by that guy. He did not even say “garbage scow” or “junk bucket.” He’s right, though, after a few years of hauling the trash, the airframe will probably start to have issues – which means that a few F-35s will be designated as bomb haulers. Remember when they were going to be the next-generation air dominance stealth fighter?

Israel wants developmental and operational independence with its F-35Is, including a highly controversial plan to sustain the aircraft indigenously throughout its lifetime.

This would also help Israel in the event of a major cyberattack, which could affect the F-35’s highly sophisticated computer-based avionics. This will keep Israeli F-35s potentially safer than others operated around the world.

That last point is interesting. In a nutshell, Israel: “we’re not stupid.” Israel has noticed that the F-35 supply chain management system is both a weak link (allegedly does not work for shit) and an intelligence disaster if it did work. So the Israelis, who take their computers and intelligence very seriously, are thinking about the problem. To me, it sounds as if they’re using the F-35 in a throwaway capacity – get a bunch of mileage and bomb-droppage out of them, then ask the US for money to buy some F-16s. The Israelis love their F-16s: they work.

This whole topic is pathetic: militarists bragging about how effective their toys are at dominating defenseless air-space and blowing up undefended buildings. So brave.

O Jerusalem » « Who Could Have Seen This Coming?