The US wants to pretend to be a good broker, regarding Israel, while simultaneously offering unilateral and complete support. That’s a bad look when Israel is committing crimes against humanity.

This tidbit was on Al Jazeera but not the New York Times. We live in a high level of propaganda.

A third United Nations Security Council emergency meeting in a week – amid the deadly Israeli offensive in Gaza – has again ended with no concrete outcome after the United States blocked a joint statement calling for an immediate ceasefire between Israel and Hamas.

The meeting on Sunday came after the US reportedly twice blocked over the last week resolutions that would have condemned Israel’s military response and called for a ceasefire. Nearly 200 people, including 58 children, have been killed in the intense bombing of the besieged enclave of two million people.

It’s not merely that Biden is supporting Israel and is a waffling liberal, his government is outright supporting apartheid and ethno-nationalism. Remember this, when someone complains that the UN is useless: it’s useless by design.

I had to be careful to check the date on that Al Jazeera piece, because the reporting often sounds like a broken record. (or a DVD with a skip in the data track) for example:

New York, January 15, 2009 – The Israeli government must ensure that media facilities are not targeted in the conflict in Gaza, the Committee to Protects Journalists said today. The Israel Defense Forces (IDF) fired at least one missile today directly at a Gaza City building that houses multiple news organizations, injuring at least two journalists and forcing others to evacuate, Reuters reported.

Reuters, Fox News, Al-Arabiya, and more than a dozen other regional and international news organizations and production companies are located in Al-Shuruq Tower. Abu Dhabi TV said in a statement that Bureau Chief Aiman al-Razi and cameraman Muhammad al-Susi were injured in the attack. Both are being treated at Al-Shifa hospital in Gaza, according to the statement. Reuters reported that the injuries were not life-threatening.

Shrapnel hit the Reuters office, forcing staff to evacuate but not causing injuries, the news agency reported. Live video footage from Reuters and the Ramattan news agency shows smoke rising from the building. Al-Arabiya correspondent Hanan al-Masri, who was on-air when the attack occurred, was forced to abandon the live broadcast midway. The station aired that footage again in a subsequent broadcast.

Reuters reported that the Israeli military had contacted the news agency minutes before the attack to confirm the location of its Gaza office. Reuters also noted that the Israeli military, which has had GPS coordinates for Reuters and other news organizations since the start of the conflict, had given the news agency numerous assurances that it would not become a target.

Note, that is the “Al-Shuruq Tower” that was being bombed in 2009; in 2021 it was the “Al-Jalaa Tower” that the Israelis collapsed with a bomb. There is a hair-raising account of the bombing: [al jazeera] The Israelis knew perfectly well what they were targeting – the people in the building were on the phone with the Israelis, begging for more time to evacuate:

But with just one elevator working in al-Jalaa tower, an 11-storey building in Gaza City housing some 60 residential apartments and a number of offices, including those of Al Jazeera Media Network and The Associated Press, al-Sayed made a dash for the stairs.

“We left the elevator for the elderly and for the children to evacuate,” the Palestinian freelance journalist said. “And we were all running down the stairs and whoever could help children took them down,” she added. “I myself helped two children of the residents there and I took them downstairs – everyone was just running quickly.” 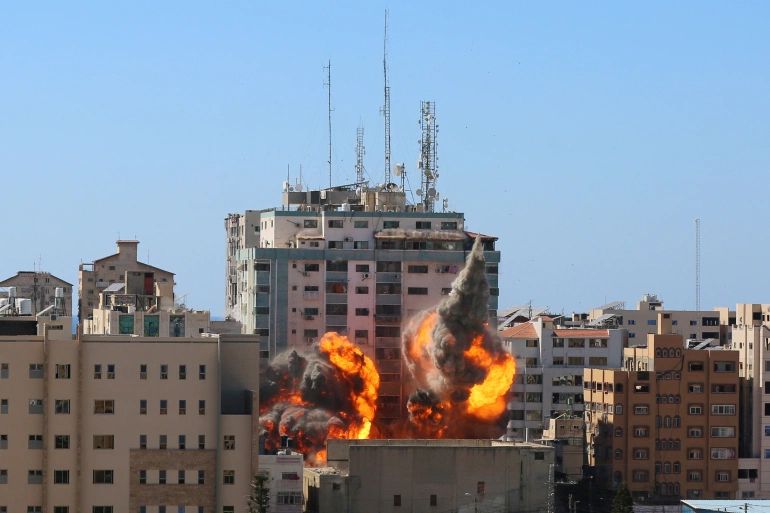 I can’t even get my brain around how humiliating it is to be forced to beg for time to get your cameras and computers out of your office, only to be told “we warned you.” As if the warning somehow makes it all acceptable? It’s a threat, it’s intimidation – it’s not someone doing the right thing. Besides, warning someone, “I am about to commit a war crime” doesn’t make it any less of a war crime.

The fig-leaf for this is one the Americans gave the Israelis, with president Bush’s stupid “War on Terror” – justifying attacks on insurgents, protesters, or anyone else that could be casually claimed to be supporting terrorists. The Israelis keep saying they had to blow buildings up because of Hamas tunnels underneath them, but what they don’t say is that the rubble will be razed and Gaza just got a little bit smaller. In the case of the Al Jalaa tower, “there were Hamas in there” was the justification. The Israeli military knew exactly where the building was and they sent an airplane (made in USA!) to drop a bomb (made in USA!) on it, and knocked it down. “The building with all the antennas on top!” I guess this is the punishment for not giving suitably favorable media coverage.

“Just give me 15 minutes,” an AP journalist pleaded over the phone with an Israeli intelligence officer. “We have a lot of equipment, including the cameras, other things,” he added from outside the building. “I can bring all of it out.”

“All I’m asking is to let four people … to go inside and get their cameras,” he told the officer. “We respect your wishes, we will not do it if you don’t allow it, but give us 10 minutes.”

“There will be no 10 minutes,” the officer replied. “No one is allowed to enter the building, we already gave you an hour to evacuate.”

Crimes against humanity, performed against the backdrop of US protection in the UN.

Remember the US’ epic shit-fit freakout on 9/11? Well, in Gaza, that’s “Monday.” And the US provides top-cover, while lecturing the world about how “Iran exports terrorism”, etc. What about this is not exporting terror?

The Israeli army claimed there were “military interests of the Hamas intelligence” in the building, a standard line used after bombing buildings in Gaza, and it accused the group running the territory of using journalists as human shields. However, it provided no evidence to back up its claims.

What does “military interests of the Hamas intelligence” even mean? Other than that it’s a justification for bombing?

Biden Is A Horrible Jackass » « Made in USA