If you read the Failing New York Times‘ coverage of the Israeli bombing Gaza, it sounds like it’s all just something that kind of … happened. Nobody attacked a mosque full of Palestinians and injured over 170, firing rubber-covered steel bullets into the mosque, you know, the bullets were just flying through the air when they happened to hit some people. And some airplanes happened to be flying over dropping bombs, etc.

If you look for “Israeli airstrikes” you’ll find pictures of explosions and aftermath, or posed shots of the mighty warplanes used with such success against unarmed civilians. It’s the American way of making war: bomb the shit out of people, then claim that you needed to defend yourself against that raggedy-ass motherfucker who’s throwing rocks at next-generation military gear.

The US government wrings its hands about selling weapons to Saudi Arabia, then cooks up some bizarre arrangement in which the US provides fuel, maintenance, and satellite intelligence then claims it’s not helping the Saudis. It’s a practiced maneuver – we practiced it on Israel.

According to Aviation Week & Space Technology, Israel is dividing its airpower into two categories: jets that can strike targets just over the border in Lebanon and Syria, and jets that could hit distant but important targets such as Iran’s nuclear program. Israel has the F-35 for the former task, and it is building a strike force of F-15s for the latter. Although the F-35 Joint Strike Fighter has stealth and sensors capable of picking up targets on the ground, it doesn’t have the range to strike targets up to a thousand miles away in Iran

Israel has had a nearly 40-year love affair with the F-15. It was one of the first countries to receive the Eagle and was the first to use it in action. The F-15 provides an impressive combination of power and range, allowing Israel to strike targets beyond the reach of most air forces. And because it’s a large fighter, it has room to add new systems as necessary. Israel’s defense industry has a long history of supporting the aircraft and creating upgrades to give the country’s Eagles a decisive edge.

The US’ arms industry has played a weird game in the Middle East, often giving Israel money ear-marked for spending on specific weapons systems. For example, the Israelis did “buy” F-35s, but they did so with money the US Congress gave them to spend on F-35s. It’s probably the only way that the US could get anyone to “buy” the damn things. 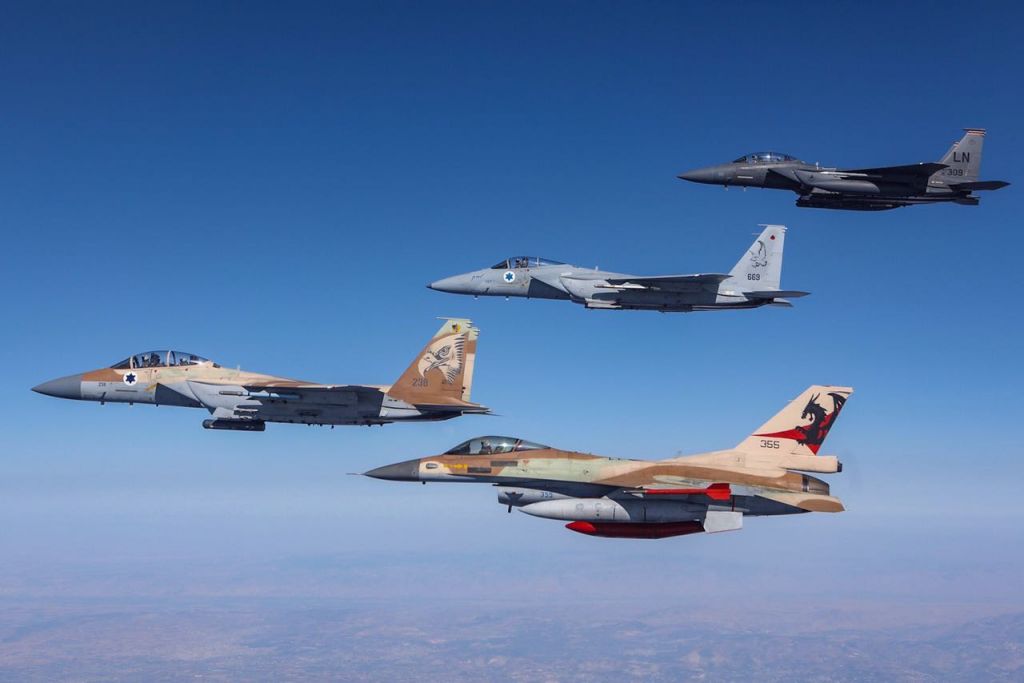 all made in USA

Israel has been doing a fine job of interfering with the Iraqi weapons program, without having to do any acts of war in the air, but that’s not good enough for the US or Israel. Israel, nobody mentions, is an undeclared nuclear state, which is not signatory to the Non Proliferation Treaty – basically they’ve gotten a carte blanche to do what the Iranians are not being allowed to do. Personally, I’m unhappy that more nuclear weapons have been brought into the world, and I think that the international community should be opposing all of the manufacture of nuclear weapons, including the US, China, Russia, Israel, Pakistan, India, and North Korea. Governments should not be producing weapons of mass destruction while wagging the finger of authoritarian justice at other states that are manufacturing weapons of mass destruction. We’ve seen that the US is willing to use them; the US is in no position to shit-talk anyone on the topic.

I remember, during the protests in Tahrir Square, the camera panned across the field and I recognized a US-made M-119 armored personnel carrier. The US has been selling weapons to the very worst governments for a very long time and that ought to stop. Because the planes just fly themselves and bombs fall from them into a crowded city. Shit just happens.

Battles were waged in the skies above southern Israel and the ground below Gaza City, as Israeli warplanes bombarded the warren of tunnels used by Hamas militants to launch attacks.

Doesn’t a “battle being waged” require that there be two sides in the air? Or is it a “battle” when you fly over undefended airspace and drop bombs on civilians?

It reminds me of my painful and laborious deconstruction of Sam Harris’ “Why do you never criticize Israel?” blog posting [stderr] Oh, did I mention Hamas? That totally justifies bombing civilians. Why are we programmed to reflexively hate Hamas? Because they bomb civilians! It’s a self-licking ice cream cone.

Looking up the link to the Sam Harris piece, I wound up reading a bit of Harris’ argument. /yeccch. Remember, that’s a guy who writes books on morality. Well, you can judge the quality of his thinking pretty easily – and judge his understanding of history, because he tries to justify Israel’s actions based on Hamas’ threat, and he appears to be ignorant of when Hamas came into being, and when the colonization of Israel started. Wow, that’s some sloppy thinking, Sam.