Often, my gutter-crawling through politics and the history of revolutions, government, racism, and nastiness, leave me so sad and angry that I don’t know what to do. Add on top of it my leg hurting and the clot-buster drugs, which seem to be making me a bit stupid and low-energy, and I’ve got a real motivational crisis. Oh, yeah, and looming over it all is my certainty that species extinction and the collapse of civilization is hurtling toward us at an accelerating rate. “Why bother?” doesn’t strike me as an unreasonable question; trying anything at all seems to be an act of denial.

The last couple of months have not been great, for me. I’m working on painting the shop doors and I have a first coat on about half of them. That’s just painting, and it’s boring. Right now I can’t stand upright for the hours it’d take to complete the job, so I’m doing it a bit here and there. I’ve set up some sawhorses and jack stands so I can put the door being painted at exactly a convenient height, and I got some chemical gloves to wear so I don’t wind up with paint under my fingernails, which bothers me much more than it should.

I have too many projects going on and that’s what’s bothering me. It’s the downside of being retired and having the means to embark on too many projects, so I can’t complain about that part. But it’s weird, how time-wasters (what Robert Pirsig used to call “gumption traps” in Zen and The Art of Motorcycle Maintenance) can suck your motivation dry, while leaving your work queue untouched. Yesterday, I had one of those days: I tried to replace a hard drive in my desktop computer and Windows 10 keeps crashing whenever the drive lights up. Frustrating as hell, so I put it on the shelf and am continuing to work on a drive that may be dying. Then, I went downstairs and thought “I’ll cast that bog oak in resin like I’ve been meaning to” Oh, yeah, that turned out to be a quick project: I mixed too much resin for my paint cup and when I hit the vacuum it foamed over all over the bottom of my vacuum chamber. So I had to reach in, pull it out without spilling any, and – naturally – got it all over my arms and hands. Then, I got to spend a completely unproductive hour cleaning up gooey resin with denatured alcohol. 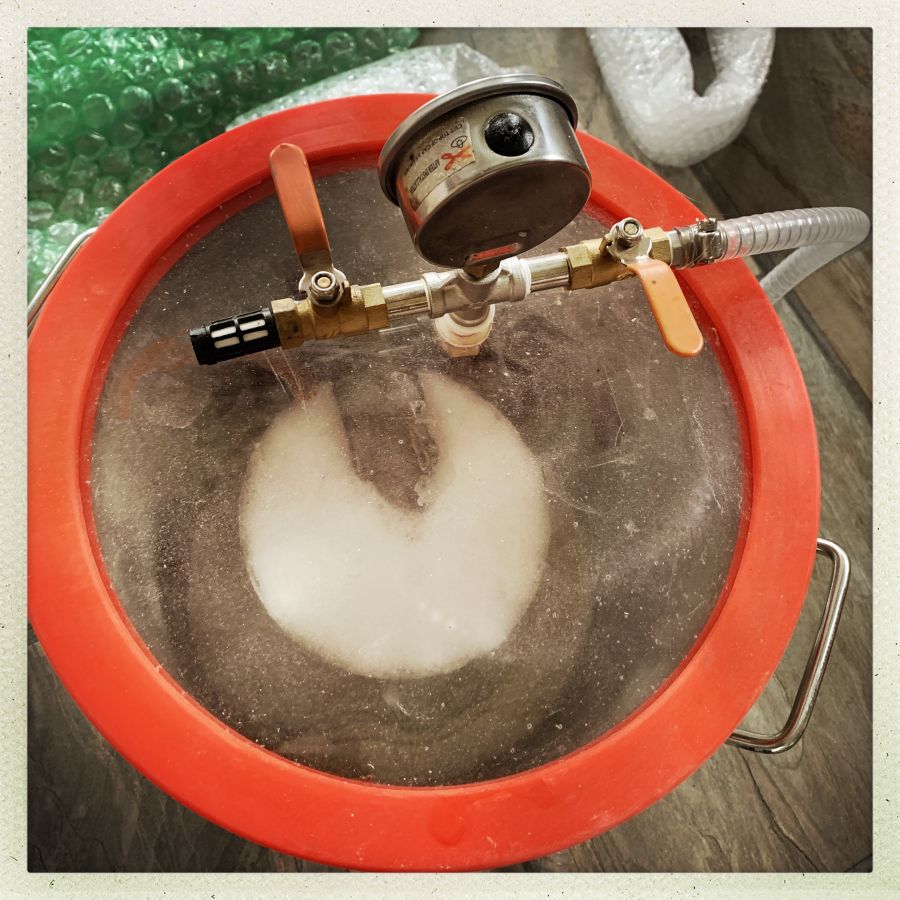 That complete, I decided to head out to get some painting done, and mixed myself a jug of water/juice. To keep pushing water through my bloodstream (clot busters, right?) (and gout) I drink a lot of crystal light, diluted 2x past where the vendor recommends. So, basically, it’s colored water with a hint of sugar – but mostly the color tricks my brain into thinking I am drinking delicious juice instead of flavorless water. So, I filled the jug and went to shake it vigorously to mix it, and the cap popped off and I sprayed red water (with a hint of sugar) all over the kitchen. Fuck me sideways. It took most of a roll of paper towels, some windex, and an hour including crawling around on the floor, to clean up. Totally wasted, dead, time. Just wasted because I was too slow and forgetful to double-check the tension on the cap before attempting an operation I have completed successfully hundreds of times. I wound up sitting on the floor, sobbing a bit with my back to the stove, then eventually shook it off, stood up, and discovered that I had soaked up another puddle of the stuff by sitting in it.

It’s dreadful to me, that feeling that the situation is slipping out of control and that I’m going to wind up being that guy they find buried in piles of unfinished projects, who died when something he stacked on top of something else fell on him. That’s a problem with working with heavy steel (and sharp steel) stuff: things falling on you can mess you up, bigtime. Let me show you a thing you would not want to drop on your foot – a thing which I will have to move safely around my shop multiple times. 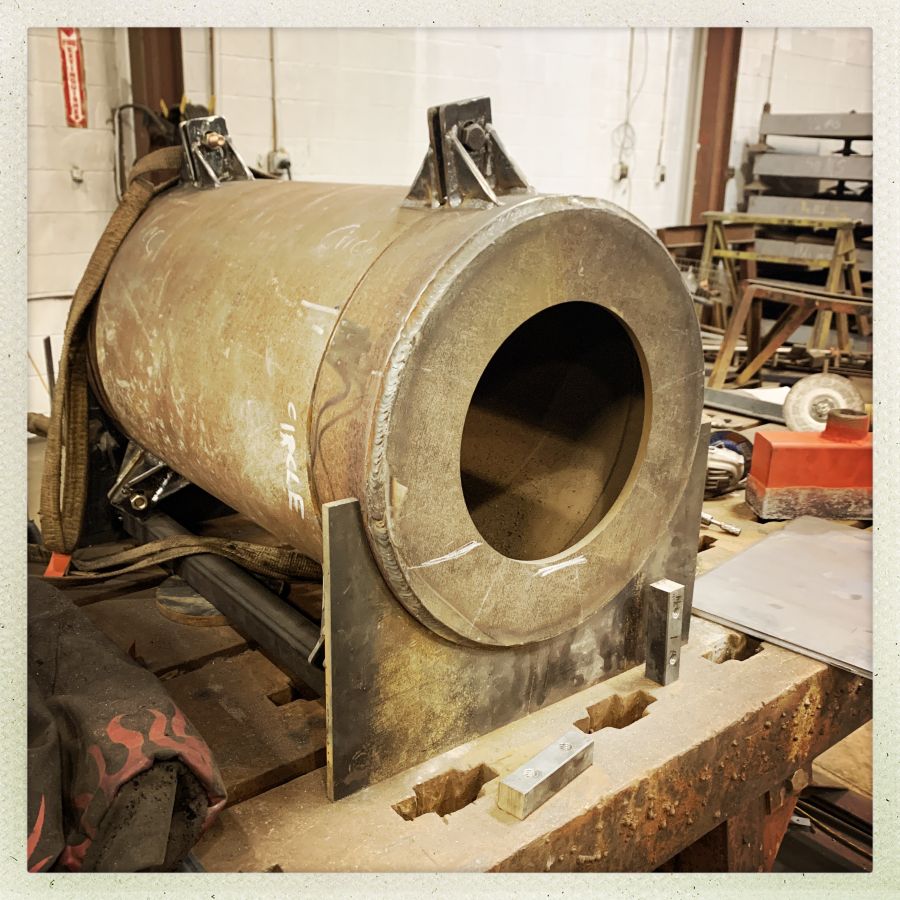 That is my new forge body, made for my by the folks at TD Fabricators in Clearfield. They are patient with me: I go in with messy sketches and wave my hands around, and they make something more or less exactly what I had in mind.

At the time of the photo, the raising/lowering front door table has not been completed, though you can see the threaded mounting-blocks on the workbench, ready to weld on. All of the material is 3/8″ mild steel, but that’s quite a change from a typical forge body, which is 16 ga (maybe 2mm?) thick. I communicated to them the importance that the welds be thick and tight, so that no blow-by happens, which would oxidize the steel at forging temperature. That weld around the front is the kind of welding I do in my fantasies, only.

The big “ears” that hold the front and back on are so that I can remove them to cast and shape the refractory cement jacket that needs to be built inside of the main body and the end-caps, to insulate it when it’s running. That’s the next big step and I admit I am not looking forward to it. I’m going to need to build a form for the interior, then weld cut pieces of angle-bracket to the inside for the cement to mechanically lock onto, then cast an outer layer of refractory based on cast-o-lite, which is lightweight and fairly strong, but not strong enough. My plan is to further loft up the cast-o-lite with the addition of pearlite and shredded carbon fiber (sourced on ebay) My thinking is that the carbon fiber will serve as a strengthener that is dimensionally stable, heat resistant, and oxidization resistant. When that’s done, I’ll make another form, and cast a layer of “mizzou” – a much stronger but less insulating refractory, which is known to be fairly resistant to flux. Then, I’ll paint that with some stuff called ITC100HT which is a very high temperature-resistant material that reflects infrared well.

Once that’s all done and cured I can rig up the propane feed for the burner, and I’ll also be making a curved wooden tray that fits the bottom of the forge-body, from which I can make a silicone mold, and cast mizzou replaceable trays for flux, etc.

This is a huge project, and I wonder sometimes if I am crazy to have taken it on. But, we must do what we must. Setting up the whole shop the first time was a huge project (remember I built all those benches and did the electrical system in the room, etc) Actually, I don’t wonder if I am crazy. I have to remind myself that I decided to build out a metal-working shop and it took me almost a year before I was able to light the forge the first time. And, in that case, I bought a pre-made forge and basically my problem was “hook up the propane tank” – this is a different beast entirely.

Oh, and I’ve been (slowly) working on the interior propane feed. I got a really lovely cut-off ball valve from China, with a stainless body and a long stainless lever – it’s built like it belongs on an Abrams Tank or an F-35 (but it was $20) (which is a lot for a ball valve) – it’s stiff and large and I’m going to need some kind of heavy bracket to mount it on the wall where the propane line enters the building. That’s going to require some red-painted plywood and brackets and all the valves and pressure regulator will have to be nicely arranged for emergency access.

So many things to do! It’s daunting. I can’t just stare at my “to do” list like a deer in the headlights, because it’s not going to get any shorter that way.