This is the state of play Wednesday evening.

As you can see I have them mostly assembled. 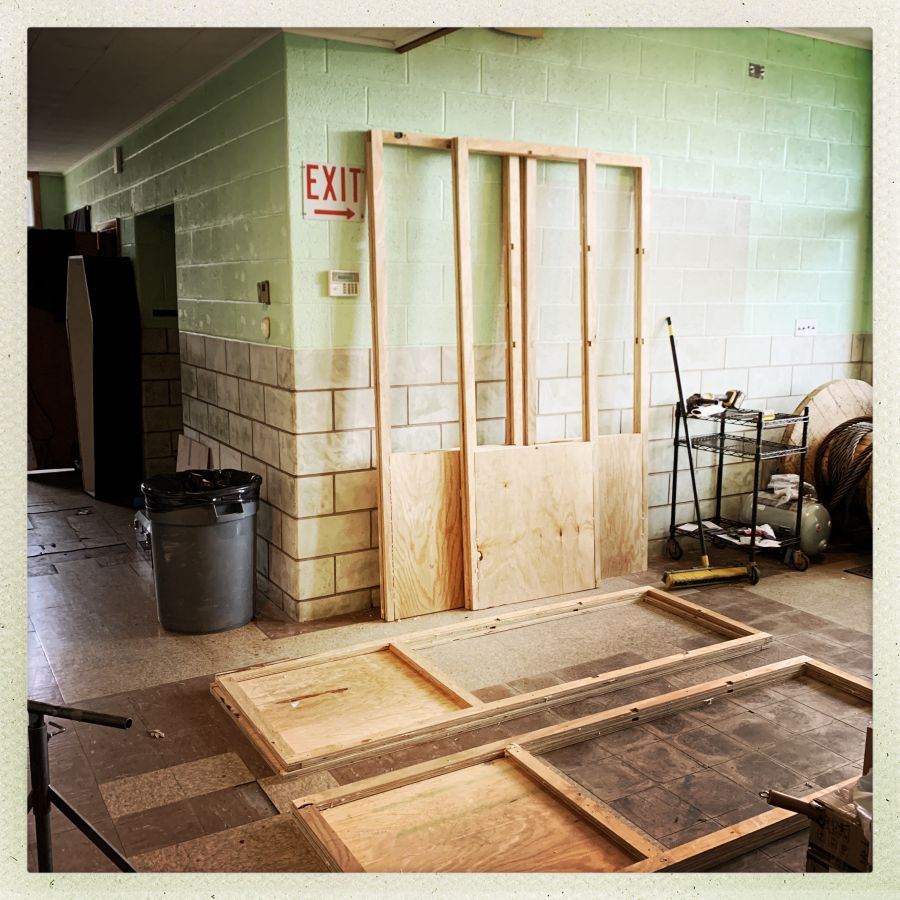 Number 6 is lying on the floor behind me.

One of the cool things about this process for assembling stuff is that the various warpages in the plywood sort of cancel each other out, especially if you glue and screw them, then put a brick or something at each corner to hold it flat. That way, the glue cures holding the pieces of wood flat, or flatter than they would be.

One of the layers has the central piece unsupported (at this time). Eventually, there will be screws between it, through the fiberglass, and into the other side – but to keep things from getting hinky while I paint, I used a trick I’ve been doing forever – liberally glue and sandwich a piece of upholstery linen in the unsupported joint. It really solidifies it. When I do the cross-members (the next step) I will be doing that at each intersection; there aren’t that many. Another trick I used was, since I’m stacking everything to keep it oriented correctly, I put pieces of cello tape at the spots where glue is likeliest to leak down and join the upper layer to the bottom, prematurely.

I wish I had set up a pair of stands and a piece of plywood and used that as an assembly table. I figured that the “up and down” was not going to be too bad, but I was thinking in terms of putting screws into the wood, not having to walk back and forth getting the pieces of each door before positioning them.

Another thing I regretted was using 1″ screws with a torx drive. My cordless drill handles them great, but I don’t have one of those magnetic screw holders that has a torx – just a phillips. I suppose I could have rigged one up but I figured “why not?” and just positioned all the screws between my left thumb and forefinger, as one does. My thumb and finger were not shredded by this, but it feels like it. I had a lot of threads rubbing against the meat of my thumb and it’s got a small piece worn away. Yes, I am aware of “gloves” and even have them, but picking up screws is a pain with gloves. I should have wrapped the thumb and finger with gaffer tape but I didn’t want to get up and walk across the building to where there is gaffer tape.

Anyhow: it could have been worse. Although, schedule-wise it’s F-35ish. For any project that is not $200bn and 12 years over budget, I mean. Wow, think what kind of machine shop I could build with $200bn! “Is that a solid gold bridgeport mill?” Pshaw, hahahah, that’s my spare. I usually use the platinum one.

The icing on some kind of cake was that I realized that the width of the doors is smaller than the maximum capacity of my lovely table-saw mega-sled. So when all the glue is dry I’ll trim a bit off the tops and bottoms to make them perfectly flat and straight. I’m not so worried about the sides but I could probably feed them through the saw with the rip fence. May as well spend another 20 minutes making everything look like it was crafted with love.

Don’t worry: when time comes to final assemble, I’ll have a magnetic drive guide so I won’t be shredding my poor old thumb.