Currently, I am in the process of making a small batch (4) of kiridashi. It’s a pretty strict design and, while it probably looks like it’s easy to just make a single large flat bevel, it’s not.

It’s probably easier to make smaller bevels and it’s definitely easier if they are curved; you don’t have to be as dead still on the grinder. I’m not complaining – I love making blades of any sort, it’s just that it’s a bit more complicated than it probably seems. And I sort of cheat.

The way I cheat is by having my grinder on a foot switch. It tears the motor up if I am constantly switching it on and off, so I usually just have my foot planted on the switch. But, when you get down to fractions of an inch, then it sure is nice to be able to spin the grinder down, position the work-piece where you want it and at the exact angle, then (without having to move your hands!) turn the grinder on. The next level of cheating is to use a jig, and the level beyond that is to use a CNC milling machine to shape the blade to within a thousandth of an inch, and just polish it.

Kiridashi are a good chance to see how consistent your hand is. Also, they’re usually made with the nastiest, hardest steel that the smith can produce – which means that, when it’s quenched and you’re trying to fine-shape the edge down to a perfect nonexistence along a straight line – the stuff is glass hard and the grinder works its magic very slowly. 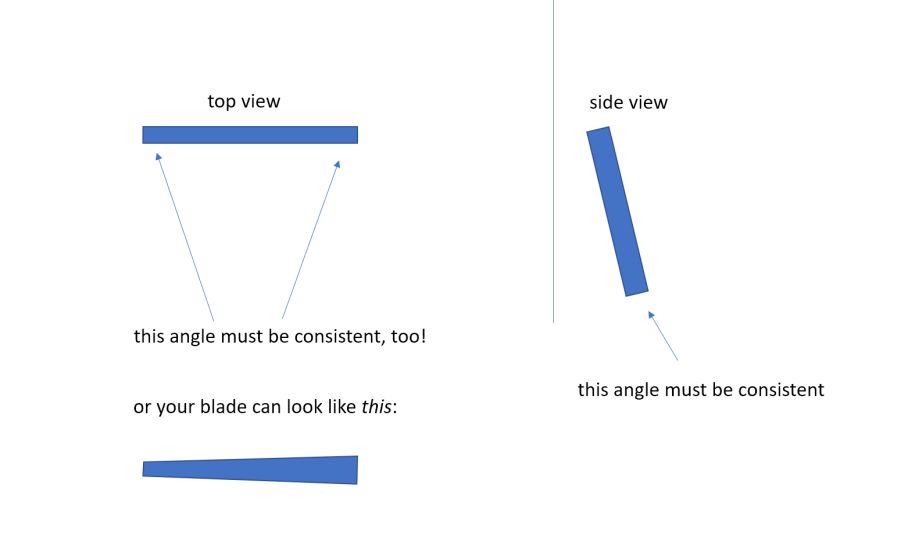 When you’re making kiridashi, the bevel angle and the cutting edge angle both have to be perfect, or it is immediately obvious to everyone.

I’m not complaining. It’s a joy to make things, but sometimes the simplest things are harder than they look.

Why I am dwelling on this, right now, is because I have 4 lovely kiridashi in a variety of sizes, sitting downstairs and I discovered that two of them are a few thousandths off in the top angle, which means they are insanely sharp at the tip and not very sharp at the heel. That sucks because I thought I had them right until I put them on a sharpening stone and the heel resolutely remained dull. There is no sharpening stone that I want to use to remove all the steel from the bevel of a kiridashi, so it’s back to the grinder, which means that I have to re-start the polish and re-etch and re-sharpen. It’s what happens when you’re a bit too tired to be grinding kiridashi, but you do it anyway. 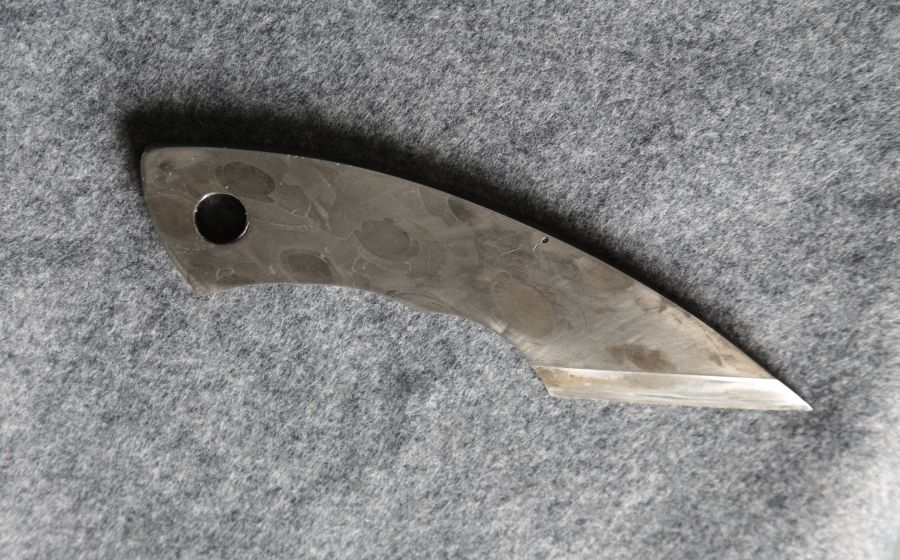 That’s the “gojiradashi” (godzilla kiridashi) which I made as part of a commission. If you look closely, you can see that the edge is slightly curved; that makes it easier to cut with, because the handle is curved, too. “It’s not a mistake” in other words. The steel is motorcycle chain canister damascus, about 1/4″ thick faced onto a piece of 1095 high carbon steel. I don’t know what is in any given batch of motorcycle chain but damn, that stuff is nasty. Even with the blank annealed, drilling that big fat hole in the end was an hour of working my way up through the drill sizes. It does not matter if you’re using a 2,000lb Bridgeport milling machine, or a hand drill, your cutting tool has to survive the heat and torque of scraping layers of steel away from other layers, and the heat that produces.

The angle of the bevel is a bit steeper than I would normally use, but when I made the blade thick, I made the bevel steeper, so it wouldn’t go way back up the handle, where the user’s finger might get “involved” with the edge.

One final point about kiridashi: it’s tempting to make them exotic. I have a vintage Japanese-made one that I bought in the 80s, and it’s made of tamahagane and wrought iron. Tamahagane is the Japanese term for “jewel steel” – it’s the heaviest and most carbon-rich steel that is produced by a given smelting run. Hand-made Japanese tamahagane is now impossibly hard to get, so there are smiths who reproduce the process on their own. I was scheduled to be taking a class at Dragonfly Forge where we were going to melt some iron sands down with charcoal to produce a plug of steel, but Covid intervened and now (apparently) the whole area near Bandon is a mess, with forest fires coming within a couple miles of the Dragonfly shop. I had hoped to score some tamahagane to make myself a proper kiridashi but that may not happen for a while. Another alternative, which I may explore, is to melt down a car brake rotor with some vanadium and charcoal, using a propane/oxygen blown smelter. Fun, but dangerous. It doesn’t get more exotic than that.

The ones I am prepping for my next FTB auction are 1095 with suminigashi facings that are quite thick, so the bevels are gigantic. It seemed like a good idea until the reality of polishing a glacier began to set in.

Inject Money Into an Inefficient System, It Does Not Get Better » « A Rubicon of Sorts