The support stands I have are about 7″ too low to reach the bandsaw at full extension. So we tried the sawz-all, and it worked surprisingly well, considering that the thing was up against a 6″ thick baulk of plywood and glue. Shortly after we got started, we found a nail in one of the pieces of plywood, which dulled the blade and required a replacement blade. 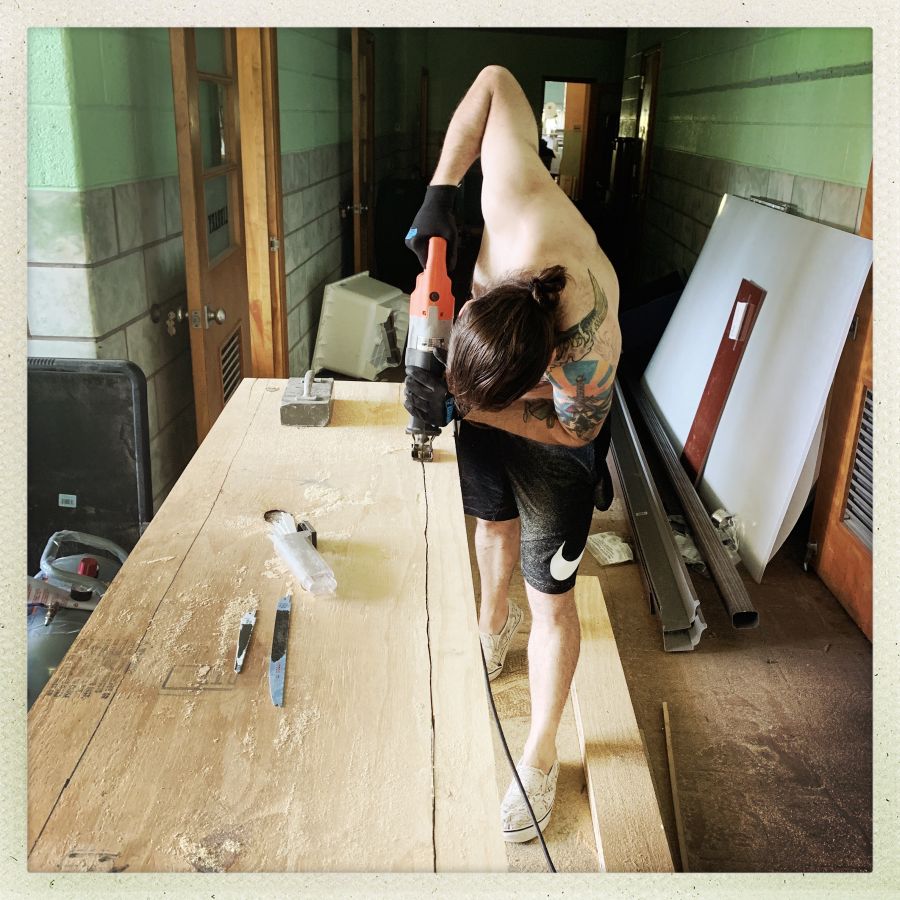 The cutting speed came out to about 3″ per minute, which was really not too bad, except we were working on large cut-outs. Since Q had electrical system work to do on his van, and I had a knife handle to shape/finish, we decided to each do our own thing and swing by and take a whack at the sawing whenever we felt like it. That made it a lot less of a slog, working a foot at a time now and then. I developed a trick of putting the saw vertical and putting a velcro strap to hold the trigger down (as one is explicitly advised not to do in the manual) then pushing it forward with my hand and weight like it’s a sort of vertical bandsaw. That worked well and was easy and pretty quickly all the cuts were done.

Then I spent a while injecting glue into any cracks in the wood, and driving screws in here and there to hold it all tight. 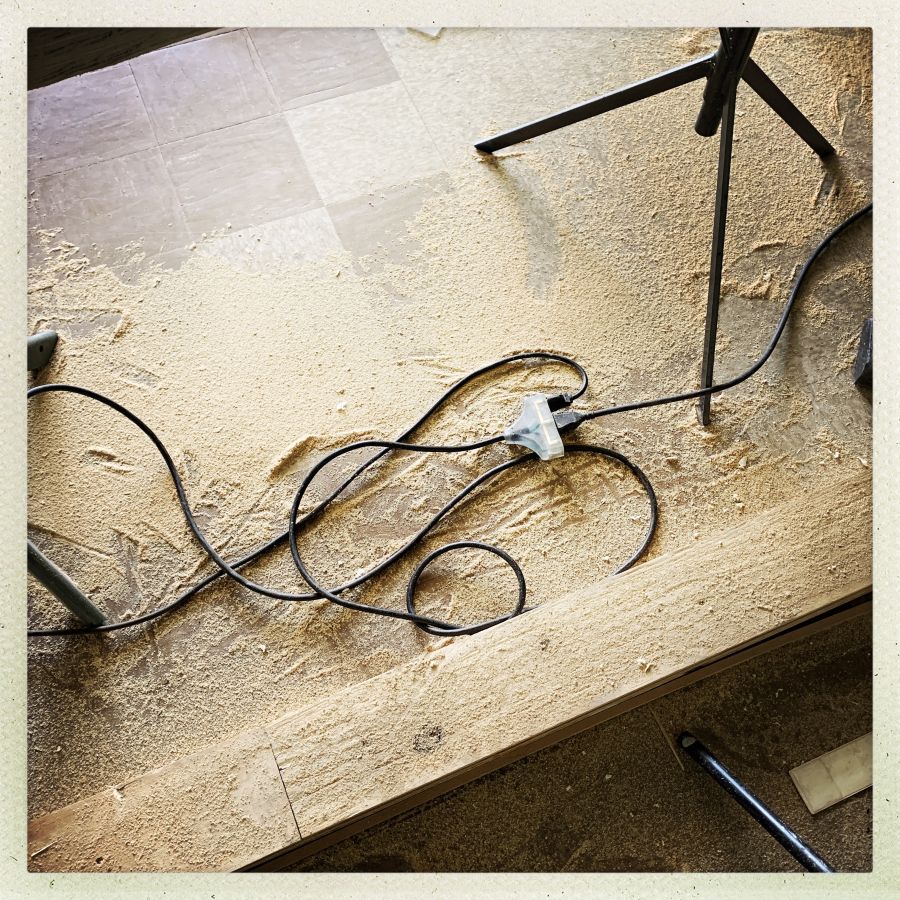 Probably the most useful things I have in my shop are my steel jack-stands. They’re originally made to support conveyor/roller belts and each one is rated to support several tons. They were cheap, back when I first got them, so I got 6. If you need to assemble something, they are perfect – set them all at the same height, align the top bars, and just slide everything together. Since the top bars are narrow, you can use them for sawing, too, by just sliding the bar in front of, then behind, the saw blade. If you hit one with the saw, it makes sparks and there goes your saw blade. 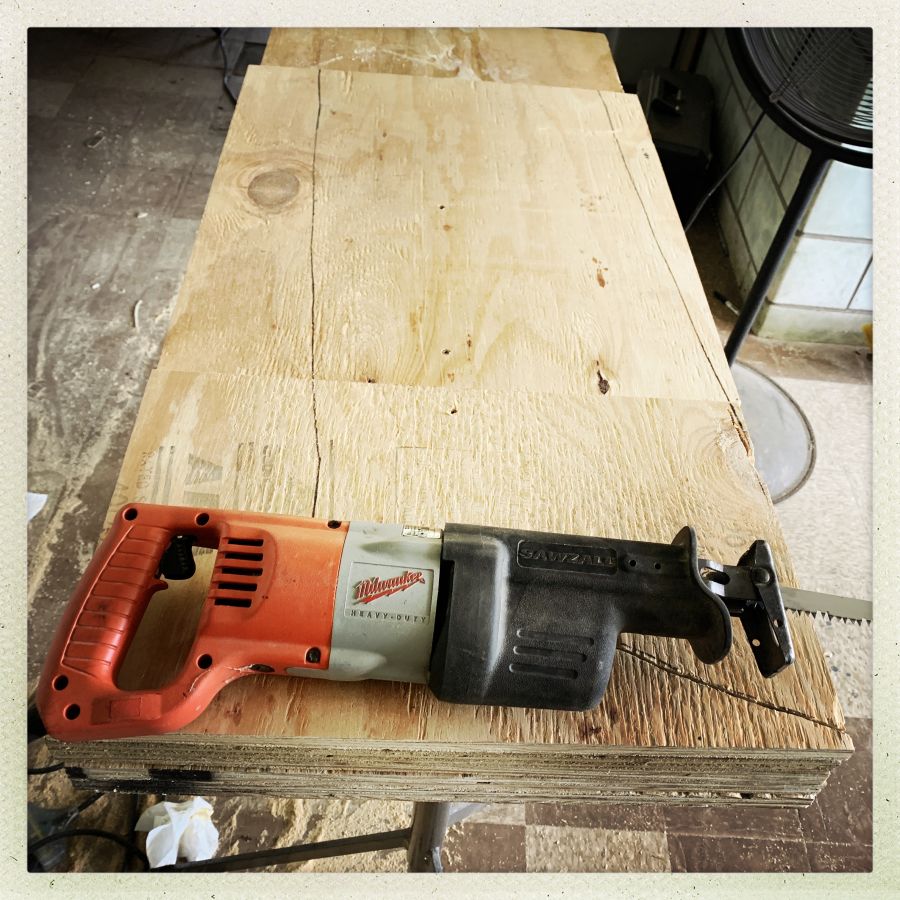 When I first discovered Ebay (when Ebay first opened for business) I spent a while buying matching “parts” tools. Mostly, that was because Americans are stupid about not repairing things, and you can pick up a beauty of a sawz-all like that one above for $25 “for parts” because some numbskull sawed through his own power cord and didn’t want to unscrew the (do you notice them?) rather obvious screws on the handle, and replace the cord. I have a bunch of really nice gear including an old Makita hammer drill that I got for $10 because someone messed up the chuck. It took some time with an angle grinder to the old chuck apart enough to unscrew it, but then I replaced it with a lovely Bosch machinists’ keyless chuck that has performed flawlessly in the 12 years since the surgery. I used to consider resurrecting old tools to be sort of a hobby of mine, but I haven’t done much since I now have All The Tools. I feel like I should insert a standard whine here about how tools nowadays are made with lots of plastic and rubber crap that makes them look like basketball shoes, and how I’d prefer tools that were reliable and plain-looking including white plastic zones where you could write your name on them with a permanent marker (so they don’t grow feet and escape) but I’d just feel like an old fart if I started whining about that. 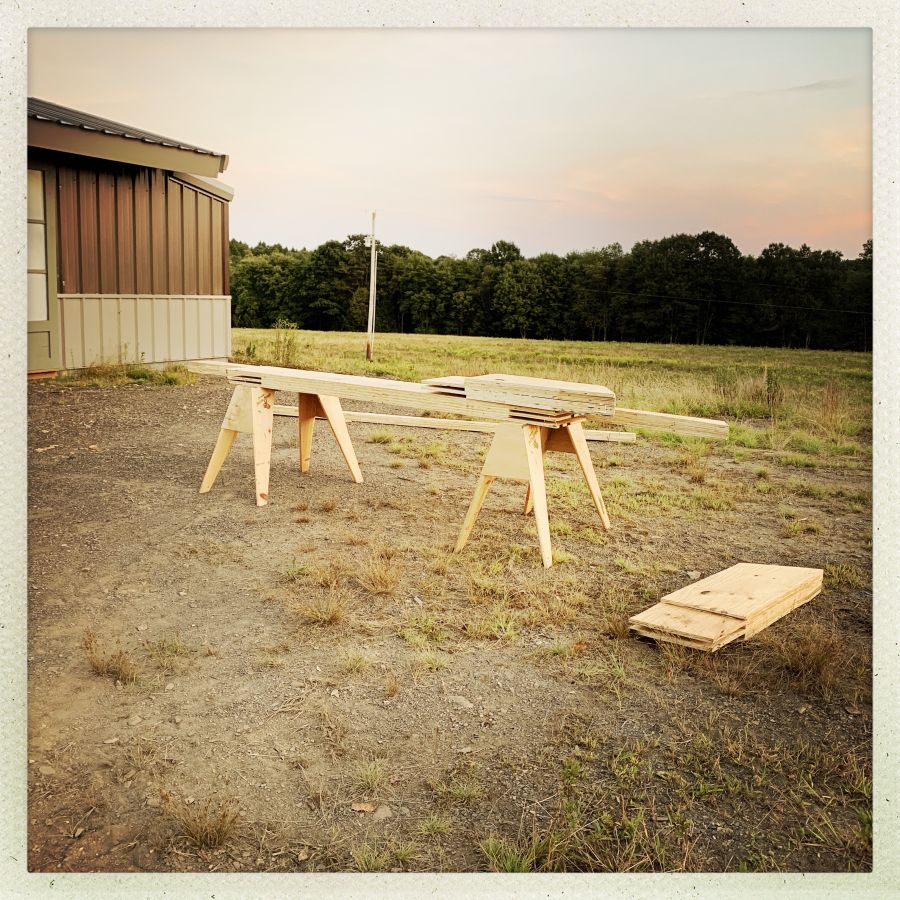 We’re going to throw down a stack of pancakes and then get to it. The next step is to cut the hole in the uprights, for the bottom beam. Once we have that in and level, we can measure the right height to even up the tops of the beams then cut down into them to hold the uprights.

Since the beams are long, they serve as levers against themselves, so they are pretty easy to pick up and move around. I did drop one on myself, yesterday, and it made a long raking bruise down my sternum. I am usually covered in bruises, burns, and small cuts so I don’t notice them except for when they are particularly spectacular.

If everything goes according to plan, the assembly will be pretty easy and then I’ll paint the upper surfaces with liquid fiberglass resin, then give the whole assembly a coat of black, and tomorrow, red highlights.

I heard yesterday that there are forest fires about 2 miles from sensei’s dojo in Oregon and that they had to evacuate. I can’t imagine how that must have been – usually, in his fine work shed, he has a half dozen katanas in various states of finish, including sometimes valuable nihonto. I assume the local state police know not to interfere with the elegant old guy in the truck full of samurai armor and blades.