The US is in the process of reviewing its statuary. [pharyngula]

Some wind up face down, some remain standing. Why, and which? It’s not just that we want to glorify the winners, or the gloriously defeated – the people who put the statues up do so to memorialize something. Was it the people, or their ideology? To me, it’s inescapable that statuary is memorial, and that it’s sometimes a reminder of a great wrong. Other times, it’s narcissistic propaganda for the rich and powerful. “Look at me upon my horse!” 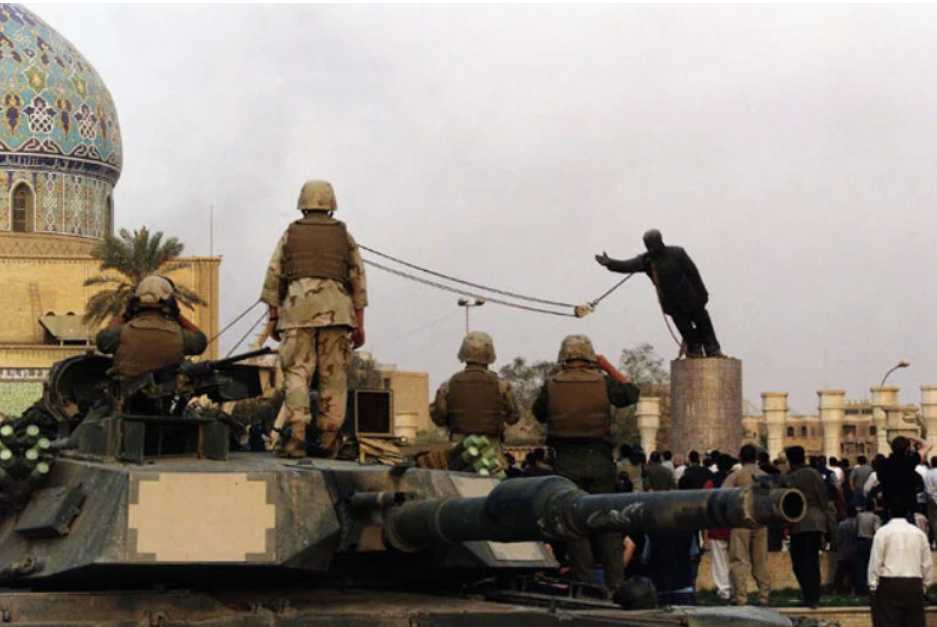 US Troops tearing down a statue of Theodore Roosevelt. Baghdad

Where it gets weird is when people internalize the messages of the statues and misunderstand (deliberately, or because they are victims of propaganda) the purpose of the statue. It’s not necessarily there to remind us of history – or there would be a statue of Ho Chi Mihn near the Vietnam memorial, or perhaps a bronze of the dead at My Lai. Instead of a movie theater and dining complex where the Homestead steel mill used to stand, there would be a heroic bronze of a mill-worker getting beaten up by a Pinkerton’s man, or – perhaps – of the Pinkerton’s men later running in fear for their lives. As Howard Zinn puts it so eloquently: it depends on your perspective.

I must explain my point of view. It’s obvious in the very first pages of the larger People’s History when I tell about Columbus, and emphasize not his navigational skill and fortitude in making his way to the western hemisphere, but his cruel treatment of the indians he found here, torturing them, exterminating them, and his greed for gold – his desperation to bring riches for his patrons back in Spain. In other words, my focus is not on the achievements of the heroes of traditional history, but on all those people who were the victims of those achievements, who suffered silently, or fought back magnificently.

To emphasize the heroism of Columbus and his successors, as navigators and discoverers, and to de-emphasize the genocide, is not a technical necessity, but an ideological choice. It serves unwittingly to justify what was done. My point is not that we must, in telling history, accuse, judge, condemn, Columbus in absentia. It’s too late for that. It would be a useless scholarly exercise in morality. But the easy acceptance of atrocities, as a deplorable but necessary price to pay for progress, Hiroshima and Vietnam, to save western civilization – Kronstadt and Hungary to save socialism, nuclear proliferation to save us all. That is still with us. One reason these atrocities are still with us is that we have learned to bury them in a mass of other facts, as radioactive wastes are buried in containers in the earth. We have learned to give them exactly the same proportion of attention that teachers and writers often give them in the most respectable of classrooms and textbooks.

This learned sense of moral proportion, coming from the apparent objectivity of the scholar, is accepted more easily than when it comes from politicians at press conferences. It is, therefore, more deadly. The treatment of heroes – Columbus – and their victims, the Arawaks, the quiet acceptance of conquest and murder in the name of progress, is only one aspect of a certain approach to history in which the past is told from the point of view of governments, conquerors, diplomats, leaders. It is as if they, like Columbus, deserve universal acceptance. As if they, the founding fathers, Jackson, Lincoln, Wilson, Roosevelt, Kennedy, the leading members of congress, the famous justices of the Supreme Court – represent the nation as a whole. The pretense is that there really is such a thing as “The United States” – subject to occasional conflicts and quarrels but fundamentally a community of people with common interests.

A friend of mine recently ran across someone on facebook claiming that the Pulitzer Prize-winning podcast 1619 [1619] was “revisionist history” by attempting to place black slaves in the larger frame of pre-southern slavery. In the sense that Howard Zinn talks about history, all history is revisionist because the historian had to choose what to leave in and what to leave out. It’s the stuff that you leave out that is more subtle and pernicious than what you leave in.

The main purpose of bronze statues is so the pigeons have a place to shit.