Nope. Even being a president on Mt Rushmore makes you safe.

The statue of Teddy Roosevelt at the AMNH is coming down. 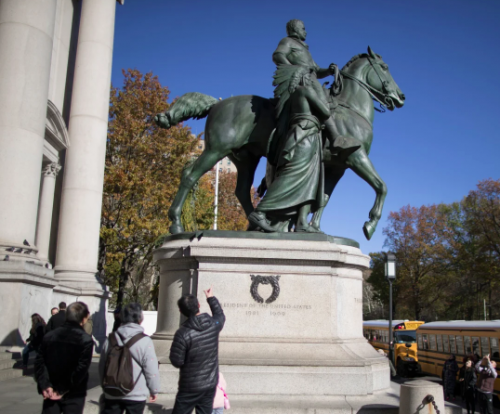 The New York Times reports that it was the museum’s decision to remove the statue, which has sat at its main entrance for the last 80 years; the city agreed it was time to take it down. Though the statue intends to honor Roosevelt—New York’s former governor, a U.S. President, and a famed naturalist whose father was one of the museum’s founders—it also depicts colonialism, as evidenced by the stereotypical Native American man and African man who flank the horseback-riding white man at its center. In 2017, activists splashed blood-red paint on its base, noting that the statue “is bloody at its very foundation.” And with reignited nationwide conversations about and removals of statues depicting Confederate generals, slaveholders, and genocidal explorers, the museum decided it was time to revisit Roosevelt.