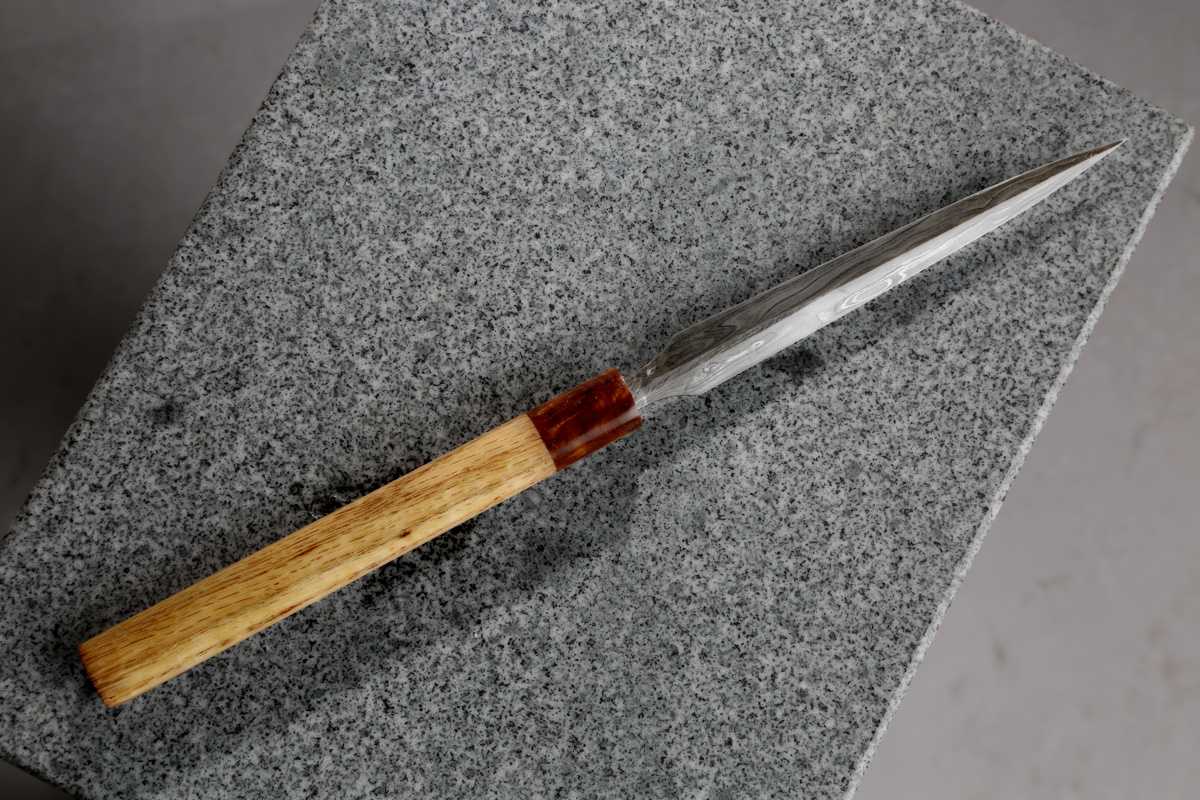 These are letter openers not “daggers”. No, seriously, a combat knife needs a much thicker blade/tang to withstand the weight of a body. Also, did you know that making a “dagger” in Pennsylvania is a felony, if they choose to prosecute you for it? (i.e: if you’re already in prison or you’re not white) It’s plenty sharp and fun to sharpen – it’ll whip through an envelope or take tape off a box like nobody’s business. I am sure you could poke an eye out with it, so be careful.

This blade has a rather funny story: it was a mistake. I meant to make it out of low-layer-count twist like #14, but accidentally picked up a chunk of my home-brew suminigashi. That’s higher layer-count composite that includes mild steel for strength. The mild steel won’t harden (sort of) but layers beautifully and is quite tough. This bar, I believe, was originally: (in layers) 1/4″ 1095, 1/8″ 15N20, 1/8″ 1095, 1/8″ 15N20, 1/8″ mild steel, 1/8″ 1095, 1/8″ mild steel. Then I welded it, drew it out, cut it in 5, cleaned and stacked it, welded it again, and twisted it then formed a bar from it. Anyway, you can imagine my surprise when I test-etched it and a completely different pattern appeared from what I expected. I had put down one bar, and picked up another.

It’s still strong and tough and pretty and it’s still sharp and poky but there are going to be some spots on the edge that are mild steel instead of high carbon. In principle that’s a major flaw, though I assure you it takes a nice edge. It just may not hold it in some spots – although there is a chance that some carbon migrated over from the high carbon stack and the mild steel may surface-harden.

I have switched to including a “reserve price” in my auctions. That means, that bidding starts at the reserve price. I will try to keep it reasonably low, but my old auction system had a flaw in which someone could stomp a high bid and win the item for $1. Thank you all, collectively, for not exploiting that.

Whoever bids the most for the letter opener wins it for $1 more than the second highest bidder bid. For example, if I bid $75 and Joe bids $5 and I’m the highest bidder, that makes Joe the second highest bidder, and I win the thing for $50 – the bidding start price. This is a variation of the Ebay bidding algorithm and, while it is less effective at milking money from the bidders, it discourages people from feeling that they need to log in at the last minute and try to bid over someone else. At the time when bidding closes, whichever bid is the highest, whether it’s email or a comment, wins.