God blames individuals for the actions of their ancestors.

It’s hard to describe this as anything but “shocking” because it betrays a complete lack of understanding of how responsibility works – and that’s a really awkward thing when the being that is engaging in ancestral blame is supposedly the source of all morals. If someone other than a deity were to tell you that they proposed to punish a son for a father’s action, you’d think they were a clueless barbarian. If they then turned around and said that they were punishing the son for the father’s actions unto the third or fourth generation, it’s simply inexcusable – it’s so unhinged that it’s hard to imagine – yet christians not only imagine it, the entire doctrine of “original” sin depends on it. That’s the doctrine that tells christians that they are born needing forgiveness and redemption that they can only obtain through acceptance of Jesus into their hearts (which is another hugely problematic moral proposition of christianity that we will deal with in another section). 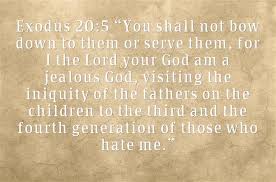 To rewind just a bit: when Adam and Eve ate the fruit of the tree of knowledge in the garden of eden, their actions were so immoral that god’s still holding it against humanity thousands of years later. If god didn’t practice ancestral blame, then subsequent generations of people would not be held responsible for Adam and Eve’s alleged trespass against god’s will, and there would have been no need for the whole exceptionally odd sin-and-redemption engine that drives christianity. Sure, people would still sin, but they’d be born sinless and some of them (the careful ones, anyway) might lead sinless lives without requiring divine forgiveness. Then, that whole off-putting rigamarole involving Jesus’ sacrifice wouldn’t have been strictly necessary, and the heart of christianity becomes an after-thought of sorts.

Modern christians sometimes look at this and say something like “‘The Fall’ is all a metaphor for how humans are without sin but make errors that require god’s forgiveness. It’s not to be taken literally.” As a skeptic, I naturally prefer that position because it allows god not to be an immoral monster (he’s just mis-understood!) but the “it’s all a metaphor” excuse doesn’t hold water because: if subsequent generations of humans want to get involved in a complex negotiation of sin and redemption with god, there’s no need to wrap it in a cloak of metaphor. We could just say “people sin, and that’s how that happens. And sometimes they ask god for forgiveness, and that’s how that happens, too.” This is an important point, since we are talking about one of the foundational moral principles of christianity and it’s either: 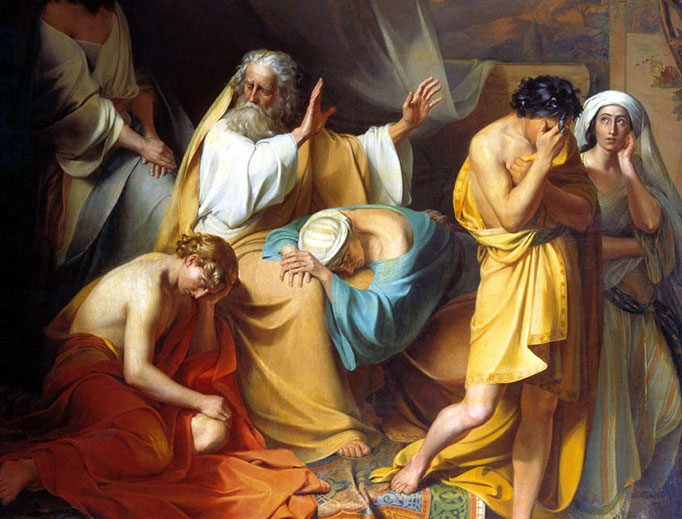 The garden of eden incident and Deuteronomy are hardly the only examples in which god punishes descendants for the alleged transgressions of their forebears. In Exodus, god punishes the children of Egypt for the actions of the adults of Egypt – more specifically for the actions of Pharaoh of Egypt. There’s also the incident of the flood, in which humanity has so generally displeased god that he tries to wipe it out, including the children of displeasing adults. Truly, god does not understand how “responsibility” works. We are not dealing with a moral being, here, we’re dealing with a psychopath. Christians have grafted on/reinterpreted the story of the fall as a partial excuse for god’s appalling behavior and immorality – literally acting as “apologists” for god’s nonsensically evil actions.

We can’t let christians off the hook for claiming to base their morals on these wild and fantastic lessons, yet, unfortunately, skeptics have ceded the middle of the game-board and allowed christians to assert that they have a handle on morality and that atheists and skeptics do not. Rather obviously, skeptics such as myself have a good enough grasp on how morals might work that we can tell immediately that there’s something extremely “off” about god’s grasp of right and wrong. And anyone who claims to believe that their morals are rooted in god’s, or based on divine command, has to deal with the awkward fact that their beliefs are literally rotten at the core.

This is not a theoretical accusation; historical christians have used inherited blame as a justification for a lot of extremely immoral actions of their own – most notably slavery and genocide. The bible teaches christians how to justify genocide, and the stories about inherited blame (“the curse of Ham”) have been used in history to justify all manner of racism and chattel slavery. It’s not a long jump to see how god can blame and curse Ham and his children to see how a slaver can enslave a person and claim that their offspring are born into the state of slavery. The whole wretched program of race-based slavery seems like an idea cooked up by christians’ god because, in a sense it was – or, at least the scaffolding for the structure was put in place by god.

For a christian who wishes to claim to be moral, they have a problem: to get there, they have to understand, appreciate, and reject god’s morals. If they don’t, they’ve decided to align with a set of monstrous beliefs. If they do, they’re not really christians – they’re atheists.

I did not want to get into quoting various christian whagarbl about inherited blame, because it’s too easy for someone to claim that I am cherry-picking my quotes to make christians look worse than they are. So, I did not delve specifically into some of the justifications christians employ, but I did search up a few to share with you. My suggestion is, if you’re discussing this topic with a christian, you don’t put any cards on the table by characterizing their possible response in advance of their making it. Just outline the problem, “god practices inherited blame and punishment” and ask them “how do you square that with any kind of morality?”

That said, here’s an example, that would be funny except they’re serious: [focus on the family]

In Romans, chapters 5 through 7, the apostle Paul argues that, from a certain point of view, human sin and death are a corporate problem rather than an individual one. He tells us that “one man’s sin [Adam] brought guilt to all people” (Romans 5:18, NIRV) and that “sin entered the world because one man sinned. And death came because of sin” (Romans 5:12, NIRV).

This is why each one of us remains a “slave of sin” unless we’re “set free” by the redemptive work of Jesus Christ.

That whacky old grifter Paul came up with a perfect problem: sin you cannot touch or avoid or control, and you need to hope for redemption. But here’s the framing:

Is the “generational curse” real? Exodus 34:7 says that God “[visits] the iniquity of the fathers on the children and the children’s children, to the third and the fourth generation” (ESV). This worries me because my family has some skeletons in the closet – and sometimes I think past sins are playing out again. Does God hold me responsible for something that someone else did

This is, supposedly, a reasonable question from a modern christian. What kind of response would you expect? I’d say something like, “families that have skeletons in the closet sometimes find that those skeletons don’t stay in the closet and you need to deal with them, and their consequences. For example, if you’re a wealthy person and you find out that your family got wealthy in the 1800s because they held and abused slave labor, that is going to be a bit of a problem for you if word of that gets out. You might want to think about how to make amends or otherwise repudiate that activity and distance yourself from it – but mostly you ought to asking forgiveness from the people on whose work you built your life, not god.” I think that’s a reasonable example in both respects: one, it shows how a person can engage with their own sense of responsibility and two it explicitly prevents a person from shrugging the whole thing off as something god can forgive them for. I’ll get to that topic in another posting, but most transgressions are not god’s to forgive. The christians continue:

So here’s what the “generational curse” is really about: The skeletons in your closet weren’t put there by your dad or your grandmother or your great-aunt. They’re the work of your First Parents. You were in Adam when he broke God’s commandment. You were condemned with him. But that’s not the end of the story – praise God!

Just as you were in Adam when he fell from grace, so now, if you believe in Jesus, you are in Christ through faith. This is what Paul means when he says that “one man [Jesus] did obey. That is why many people will be made right with God.” (Romans 5:19, NIRV).

That’s a great example of barely comprehensible christian whagarbl. It only makes sense if you turn your brain off and squint at it through smoked glass. First off, the skeletons in your closet were not put there by Adam and Eve – they were put there by you, or your parents, or your grandparents – and your responsibility for them depends on the degree to which you concealed them, profited by them, or were otherwise complicit. For example, if you discover late in life that your beloved father is a cannibal and has literal skeletons in the closet, your responsibility or non-responsibility depends on whether you choose to conceal or aid and abet that activity. There are a range of possibilities, at one end: you help get your father convicted and imprisoned and deal with the fallout trying to help gain justice for their victims and – at the other – you might join them in cannibalism and be guilty of the same crime (“all in the family”). The choices are yours and they have nothing whatever to do with the decisions of some fictional comic book character in the garden of eden.

Yet, christians today teach their children this pernicious, immoral, bullshit. There is simply no way to excuse it, and no way to duck the fact that it’s some seriously nasty garbage that no decent person would teach a child.