The news is full of stories of cops gone wild. That’s as it should be – every day – until they start to realize that they exist on the forbearance of The People.

So, this is going to be a bit of a grab-bag of news, much of which you’ve probably already heard.

First, and foremost, cops in Santa Cruz appear to have walked into an outright ambush, with emplaced shooters and explosives positioned to deny them cover and destroy their vehicles. In my mind, that sort of action is the end-game that cops are asking for when they militarize and start driving around in MRAPs and up-armored Humvees: they’re preparing to re-enact the US military’s failure in Iraq and Afghanistan, right near their homes. 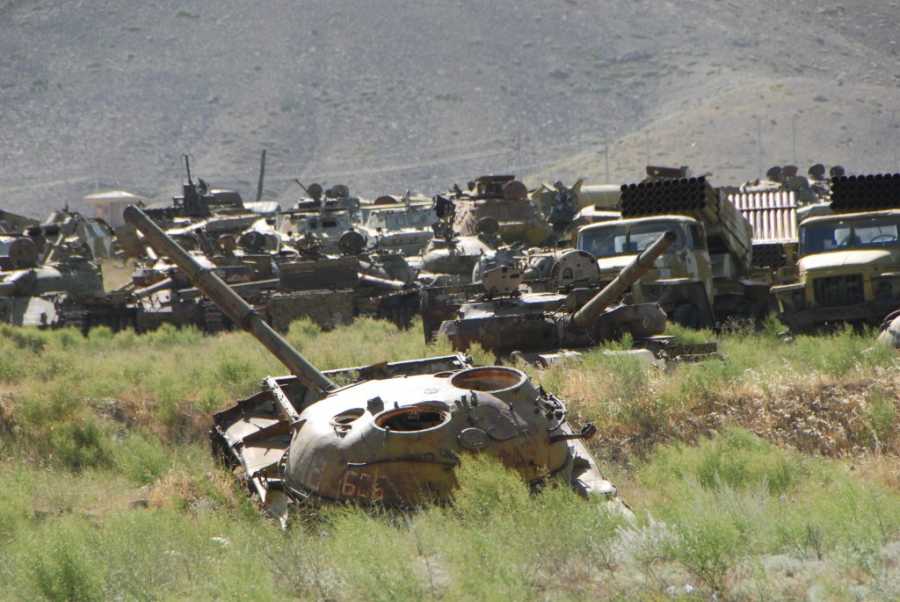 post-soviet debris in the graveyard of empires, Afghanistan [source]

The cops only lost 1 killed and 2 injured. [newsweek] At the height of their activity in Afghanistan, Russians would lose entire armored patrols including light tanks, and nobody would know what happened to them or where the bodies were buried. It’s odd to me that US cops don’t understand that there are lots of people in the civilian population who can make an explosively-formed penetrator or put a round on target 400 meters out; that changes the situation dramatically – they just haven’t figured it out, yet. If they keep having video of cops knocking 75 year-old men down, or shooting teenagers in the eye with rubber bullets, that’s where it’s going to end up. I’m not promoting or condoning attacks on cops, but they need to understand that de-escalation is the only answer when you’re vastly outnumbered.

A California sheriff’s deputy was killed and two other law enforcement officers were injured after being ambushed with gunfire and explosives while pursuing a suspect, authorities said.

A second deputy was wounded, and a third officer from the California Highway Patrol was shot in his hand, Hart said.

“In my 32-year career, this is the worst day that I’ve ever experienced,” Hart said as he began a news conference on Saturday evening.

Cops can’t seem to avoid being assholes, even when they’ve experienced a legitimately traumatic event. That’s the worst day he’s experienced? Getting shot in the hand? The deputy was killed. Talk to me about your bad day, officer porkfatback.

Over at Mother Jones is an article [mj] about cops doing what they can to make the situation worse. As many people have pointed out: the solution to protests about aggressive policing is not to aggressively police protestors. In this case, cops were caught on camera slashing all of the tires on all of the parked cars at Kmart. 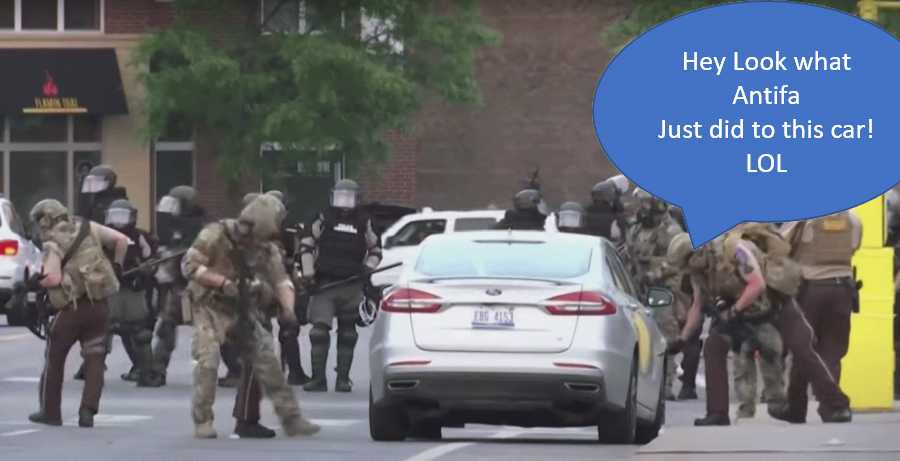 There is genuine puzzlement as to what the cops think they were doing. For one thing, Kmart parking lots have tons of security cameras, and there were journalists everywhere. One theory is that they were hoping to clobber a few journalists’ rental cars.

My theory is that they are just frustrated authoritarian goons who want to break things, and when they discovered that protesters might be getting too numerous, they decided to pick on a target that’s more their size. “Boards don’t hit back” and all that.

Meanwhile, a greater concern are the mysterious highly geared-up and steroid-pumped paramilitary forces that have been appearing in Washington, DC, over top of the mayor of the city’s strenuous objections. [dallasnews] 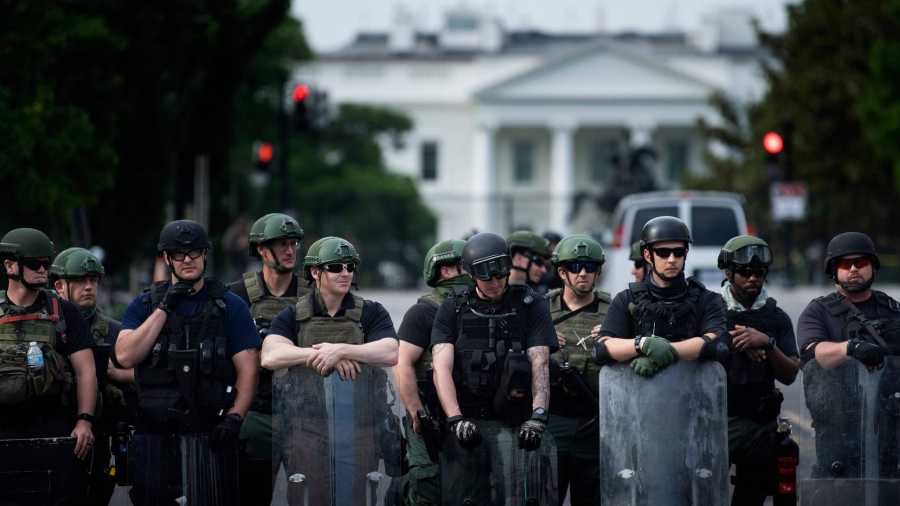 It turns out that it’s true: the prisons are full of thugs and horrible gangs. This bunch work for the Texas State Prisons – they’re a special swat team for putting down prison riots because patience never works for that. OK, here I have to admit that I used to know a guy who was in a special military police unit. I don’t talk to him, anymore because I realized that those guys joined up so they can get into fights. I don’t mind if they go play Fight Club by joining an underground MMA league or something like that, but that’s not what they want – they want to hit people who are less well-armed and less well-trained than they are. Because if they wanted to fight someone who might hit them back, they’d be fighting ISIS or Afghani hill tribes. And we wouldn’t need to worry about cleaning up that particular strain of American garbage, any more.

As a semi-recovered “gun nut” I also obsessively examine and identify weapons in photos like the ones above; specifically small arms. One thing I am looking for is whether the guns are for show, or if the person carrying it is also carrying ammunition. I want to know if the idiot cop I see strutting around with a submachine gun is basically carrying a fancy multi-thousand-dollar club, or if they are carrying potential lethal force. This is not a recommendation, by the way, but a lot of the cops you see at these riots are not carrying ammunition and someone with a baseball bat could relieve them of their fancy rifle and have a pretty nice weapon if they got a few clips of steel-core ammo at a sporting goods store. Actual terrorists understand this, of course – protestors do not. One of the ways you can tell that the protestors are ordinary civilians and not “crisis experts” or trained provocateurs is:

I was not very happy at all to see what appeared to be loaded 30-rd clips and hangun clips in the tactical gear worn by some of the most ‘roided-up of the Texas cops. Those guys want to kill someone.

When the Chinese government suppressed Tienamen Square protests, they used an armored unit from North China – that’s a common tactic in oppressive states: you don’t want the soldiers to be shooting at neighbors, so you bring in people who don’t know the area, so they’ll bond to each other, not the locals. The fact that the Trumpies (I blame Bill Barr) brought these guys in is a terrible sign. They’re sociopaths who want to kill – just like Trump and Barr, except they’re not chickenshits that will cower in a bunker. 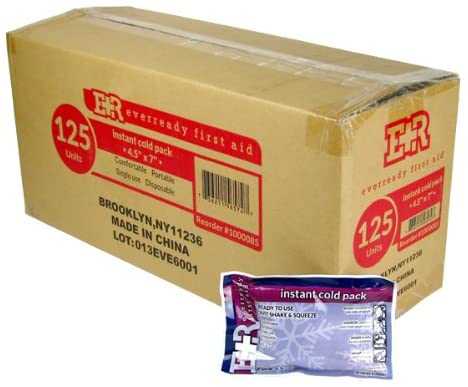 Explosively formed penetrators are easy to build. You need a clay flower-pot, some high explosive, and a 12-ga sheet of copper metal. That’s it. For high explosive? I shouldn’t tell you this but you can buy high explosive in case lots on Amazon.com. [amz] Detonators are tough, you’ll need your own PETN.

What amazed me about the Boston Marathon bombers was that they scraped all of that bursting charge out of fireworks, instead of just going to a sporting goods store and buying a couple pounds of fine black powder.

This is the last piece in this grab-bag and it’s really horrible; by far the worst. Apparently the republicans have been thinking about using these sorts of special forces cops to protect polling places in November. Because nothing’s going to encourage the hispanic and black voters like a ‘roided up bunch of white supremacists with badges standing around at the polling place. [the intercept] And by “retired cops” they are probably also including the really sick sons of bitches who lost their jobs for jostling 75-year-old men a bit hard with a night stick.

On Election Day in November, some polling places could be patrolled by off-duty police officers and veterans, according to a plan hatched by Republican operatives.

The idea is a reprise of once-illegal Election Day “ballot security” intimidation tactics, intended to challenge voter registration and remove voters from the rolls. At a strategy session in February attended by conservative donors and activists, several people expressed a specific need for Republican poll watchers in “inner city” and predominantly Native American precincts, according to audio recordings of the event obtained by The Intercept and Documented.

“You get some [Navy] Seals in those polls and they’re going to say, ‘No, no, this is what it says. This is how we’re going to play this show,'” said Catherine Engelbrecht, founder of True the Vote, a group that lobbies for voting restrictions and organizes volunteers to go into precincts and aggressively challenge voters who they believe are improperly registered. “That’s what we need. We need people who are unafraid to call it like they see it.”

And what is it going to take to deal with that? I suppose it’s going to take IEDs and fire-sack traps, but those retired navy SEALS are professional combat artists and are very very dangerous, very sociopathic people. They never won a war but they did win a lot of battles.