One of the nice things about completing a knife and then auctioning it off, is I don’t have to confront the occasional failure. For reasons I’ll go into, this last week has been a bad one, replete with failures.

I made a really cute little letter opener, and mounted it up in bog oak and silver: 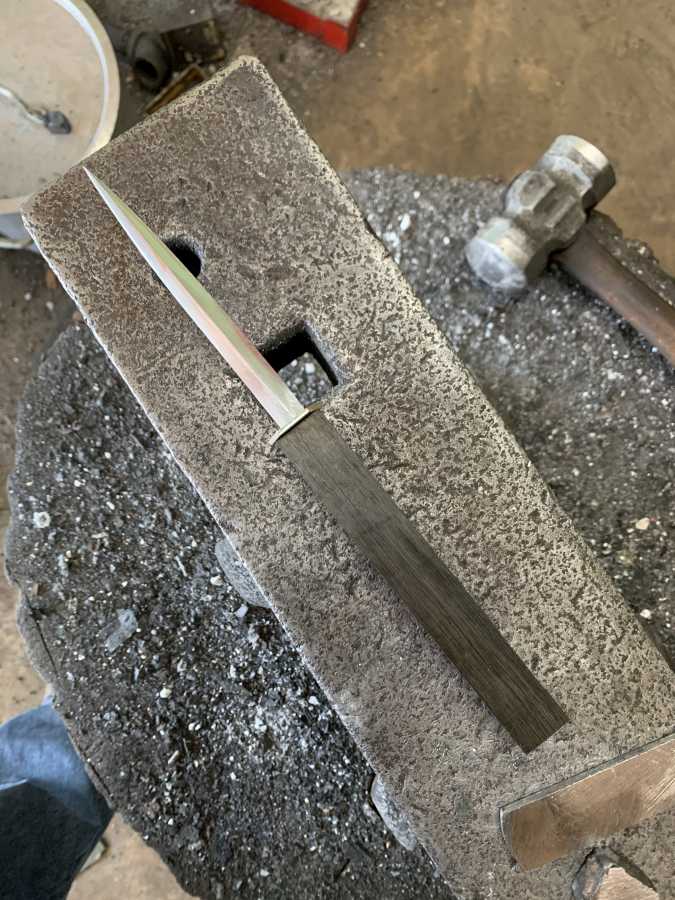 I was really looking forward to rounding that handle down and polishing everything up, but instead what happened was I put the handle on my belt sander and the handle snapped off and shot up toward the ceiling. That was totally unexpected, but it shouldn’t have been. A bit of after-action analysis made everything clear: when a blade is small, it holds and loses heat differently from something larger. When I hardened this little thing, the whole blade was at normal temperature (and so were the tongs!) and when I quenched it, the whole thing hardened. I then tempered the blade to make it springy and strong, but – because I didn’t realize that I had also hardened the tang – I left the tang glass hard. Snap. I could have avoided this problem by tempering the tang down using a traditional smith’s trick: put the blade in water and heat the tang with a hand torch. The water keeps the blade from losing hardness and the exposed tang gets softer and more springy.

At the bottom of the picture above you can see two chunks of metal. They’re a guard and a pommel for that “letter opener” I made out of motorcycle chain; pieces of wrought iron hammered to rough shape. For the guard, I thought I’d give it projecting arms that I’d put a twist in, with the whole thing heated up to welding temperature. I was concerned that the wrought iron might not be ductile enough, and I was right – the arm snapped right off. Argh! What sucks about some of these things is that you have to put the time in to make the thing before you get to see if it’ll fail. So, you’re throwing an hour or two down the drain. Worse, for something that’s going to be twisted, you need to get it polished free of scratches, first, because polishing it once it’s twisted is going to be a lot harder. “Once it’s twisted” is the problem.

Then, there are commissioned pieces or pieces I promise to someone for whatever reason. Usually I will share pictures of a build in progress, but sometimes that’ll come back and bite me. One person contacted me, asking if I’d make a blank for a camp knife. “Why not? That’s easy!” Which is true. Just grab a chunk of twistmascus and heat it up. 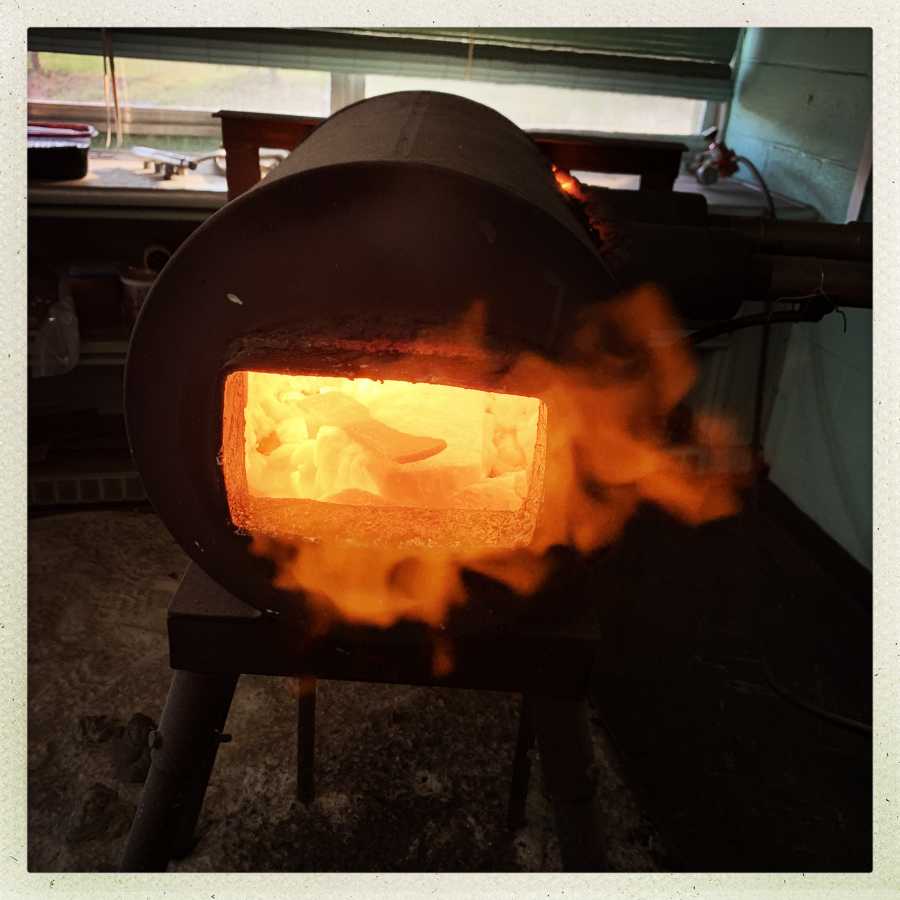 Then whack on it and smash it flat and hammer in a handle shape that’ll clean up with a grinder. 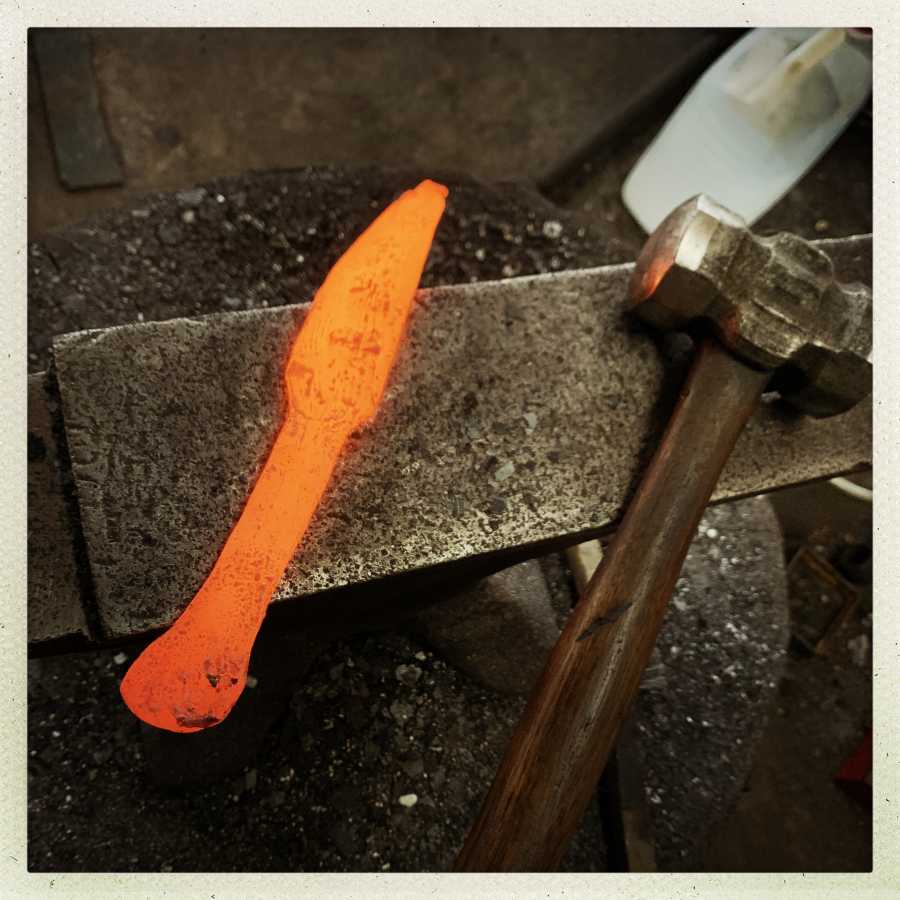 The tip looks messy; usually you leave the tip sort of squarish because grinding down the back and edge will bring the metal to a point. Grinding tends to straighten all lines and flatten all planes, assuming you know what you’re doing.

Once it’s rough-shaped, it goes in the annealing bin – a big steel garbage can full of pearlite – to cool slowly so the metal relaxes and softens. You can’t let the metal work harden if you’re planning on doing something like drilling a hole through it. 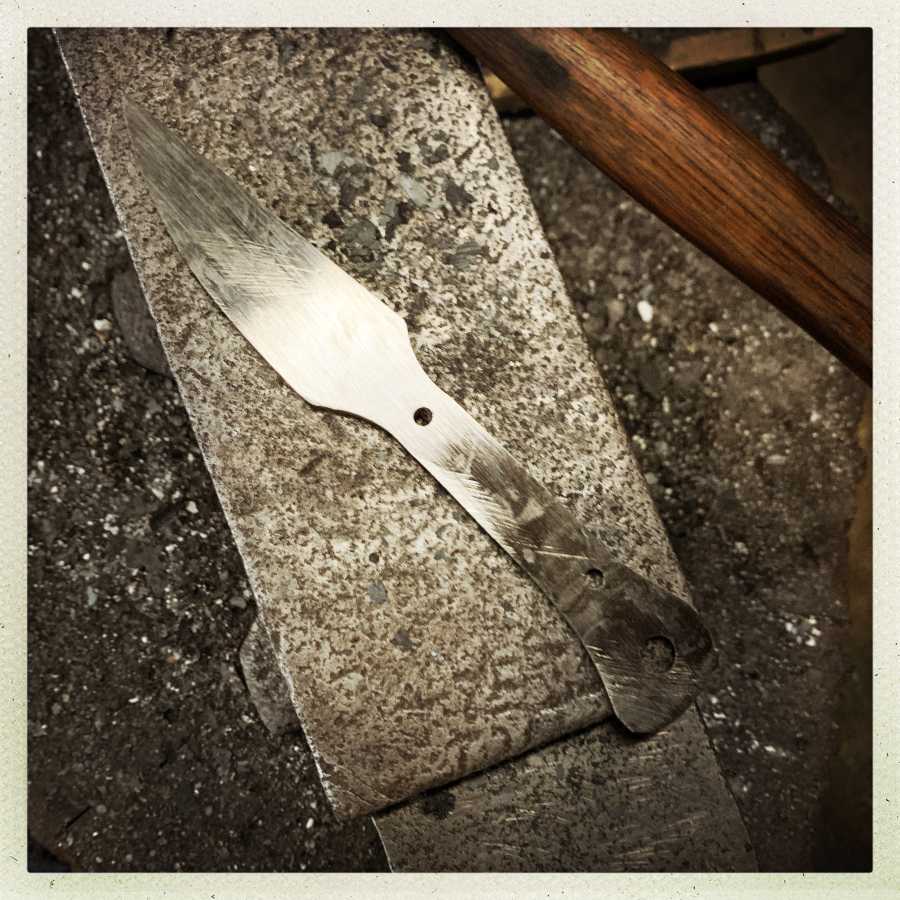 Here I kind of screwed up: I ground the scale off with an angle grinder and then got to work with the drill press to make a couple of holes. Two slab pin holes and another hole to insert a brass or nickel tube for a lanyard. By the time I had done some surface grinding it was already getting hard and I had to use precious carbide drill bits and lots of cutting oil to get through it.

Then, I did partial bevels, so I could do an edge quench on it and buff it clean and send it to its new daddy for finishing and fine-grinding. But I screwed up bit doing the partial bevels, and created a plunge-line near the back – a groove where stresses were built into the metal. What does that even mean? Well, since there are different layers of different metals, when you quench it, they are pulling and pushing against eachother, which means the blade is trying to rip itself apart. The thinner the metal is in one place or another, the more dramatic the stresses are since the metal will try to move faster because it cools and heats faster during the quench, thanks to its thinness. I heated it up, and gave it a 1-second plunge into water, preparatory to moving it to oil. 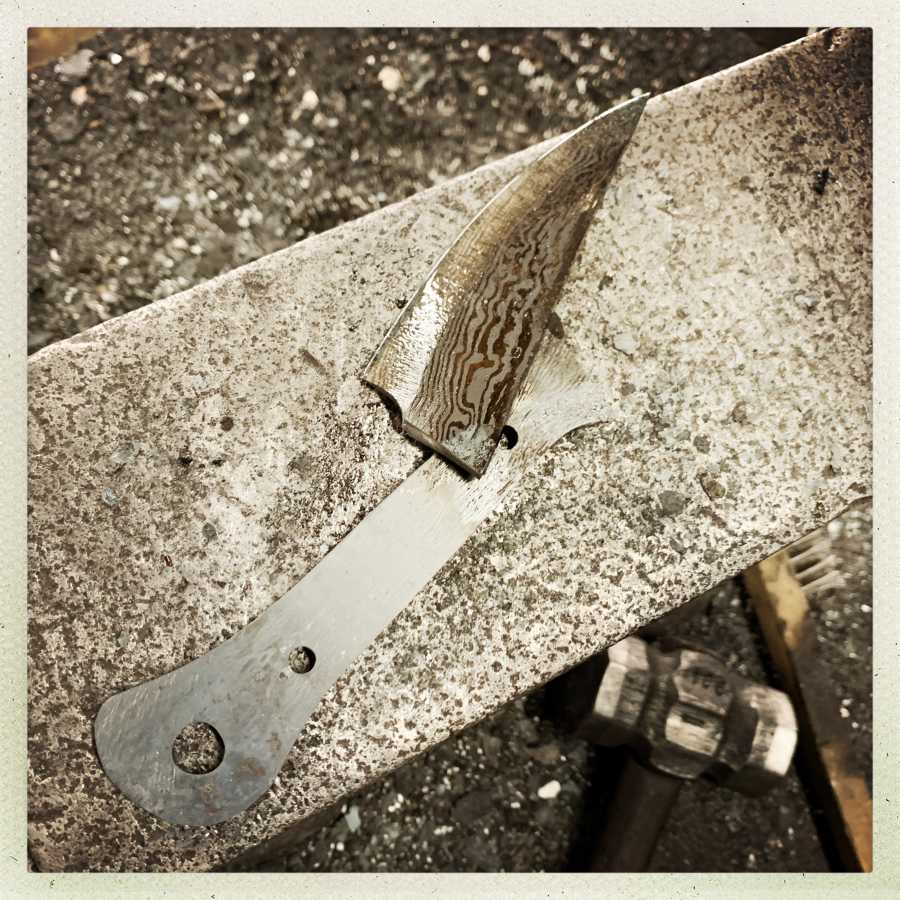 It’s a distinctive feeling, not really a sound, that comes up through your tongs. It’s how you know that you just blew apart a few hours of hard work.

Root cause analysis? None of these problems share a common thread, except that I’ve just been getting sloppy. All of these mistakes are mistakes that happened because I knew they could happen, but I just carried on anyway, because I am favored of the gods, or something. That’s an awkward attitude coming from an atheist.

I had made the mistake of sending pictures of some of these about-to-failure works in progress to various people, so now I have to deal with the “what happened to that pretty little letter opener?” questions. I think it’s good practice, repeat after me: “I fucked up.”