I’m part of the secret clique that is trying to turn FreethoughtBlogs into an arts and crafts collective.

One of the most important things I learned in this project is that scraping resin away with a chisel is slow and messy, which means that your objective should be to minimize the amount of resin between you and “finished.”

In the case of the red/black bowl, I kept adding resin in order to take it back off, which was definitely offensive to the gods, and I was duly punished.

Since there were big air pockets on the inner surface, I reasoned that all I needed to do was fill the interior with more resin and something to press it into the pockets, and then I could turn the inside and finish the outside. That strategy was successful: 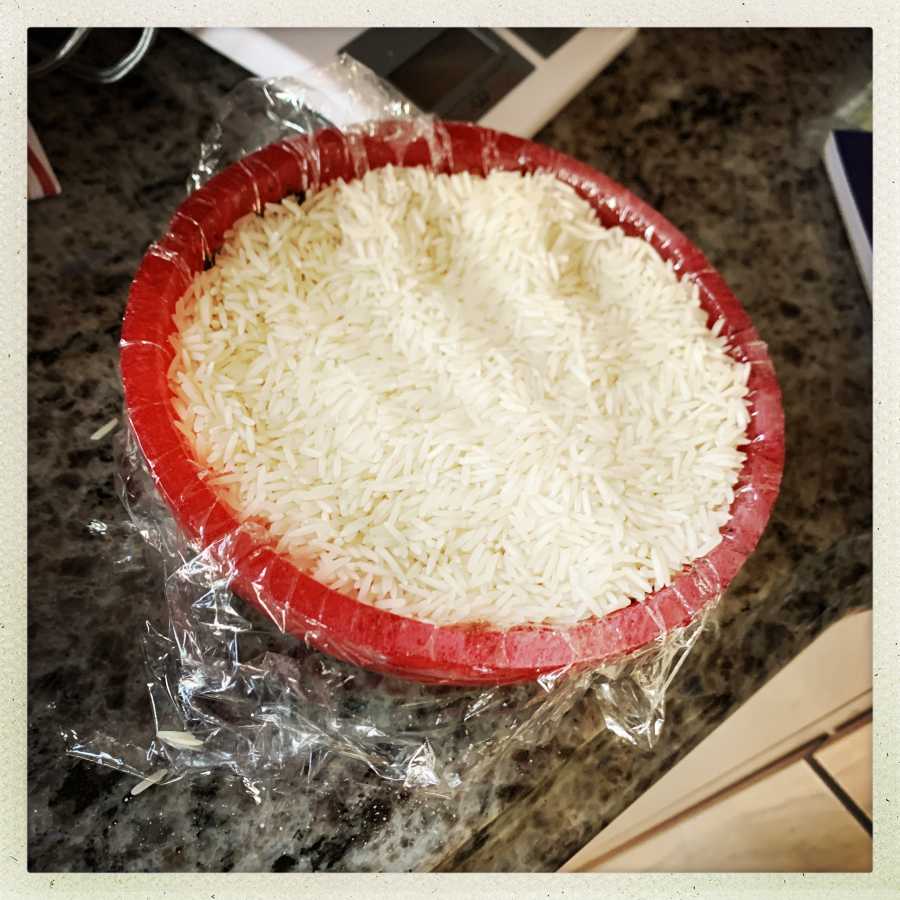 I felt pretty clever. Rice packs and locks against itself, and saran-wrap does not stick to epoxy (and if it did, the chisel would eradicate it pretty fast) – I let it cure over night and when I went to pick it up, it didn’t budge. I tapped it with some whacky-things and that didn’t work, so finally I took a kiridashi and used a small hammer to tap it under the bottom edge, levering up some good-sized chunks of granite counter-top. The counter-top cost me about $9,000 when my exwife picked it out, and I’ve always thought that granite was sealed so it was non-porous and more or less indestructible. Apparently I am an avatar of Shiva, which is a heavy responsibility. Anyway, I have to admit that ruined my Taoist detachment from material things and I did some serious /facepalming. (Don’t touch your face unless your hands are clean!) 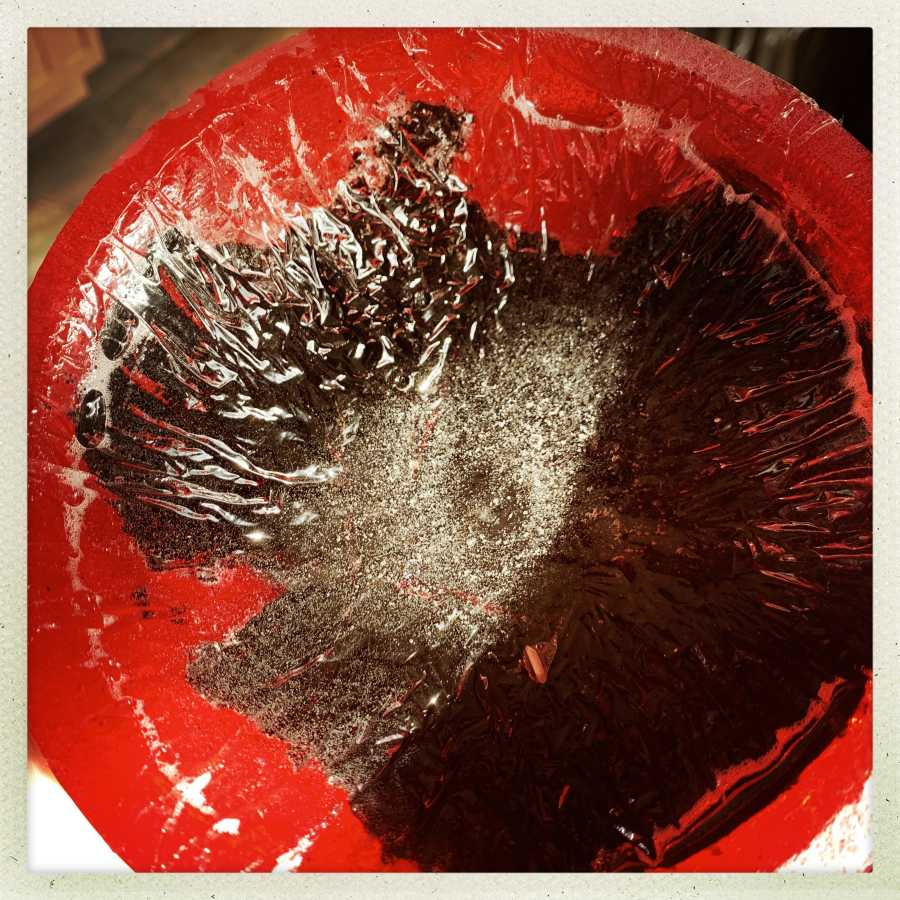 There were some chips on the edge and I filled them by making sure there was enough resin under the saran wrap to go around the top of the bowl. It came out pretty well in my humble opinion.

Then I took it to the shop and nearly rammed a chisel through my hand, trying to carve the epoxy out of the bottom recess where it had ruined the registration for the chuck to grab. 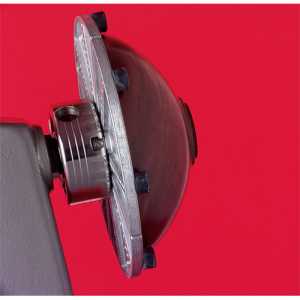 Nova makes a set of jaws called the “Cole Jaw” which are designed for holding large work-pieces with non-marring (ha!) stoppers that grab the piece from the front. I  have a set of those, so I positioned the bowl so the back was open, and then used a parting tool to clean out the grab-zone in the back.

Once that was done, I flipped it around and started making more muppet shreds.

A few interesting things: resin heats up when you sand it, the sandpaper can suddenly get hot enough to raise blisters on your fingertips. And they tell you not to wear gloves when using a lathe. So, you just take your time and sand and grind and try to get the wood to be situated where you want it. In this case that meant carving back until lots of the bog oak was showing, and the rim of the bowl was thin. 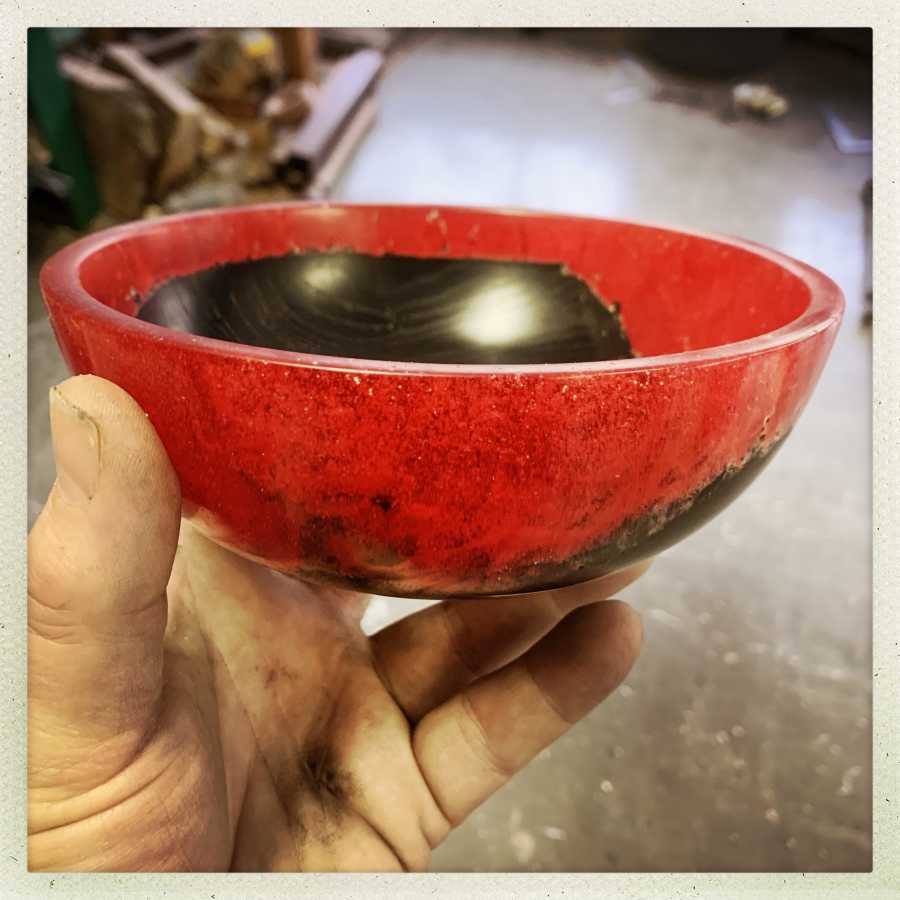 You can see the gorgeous sheen that the bog oak adopts. Wow, I love that stuff. It’s a shame it’s so flippin’ expensive or I’d be turning big blocks of it. The resin is strong as !*#&!! which is also pretty nice. There are a few spots where it’s clear through at the bottom – the resin is surprisingly transparent considering the abuse it has taken. 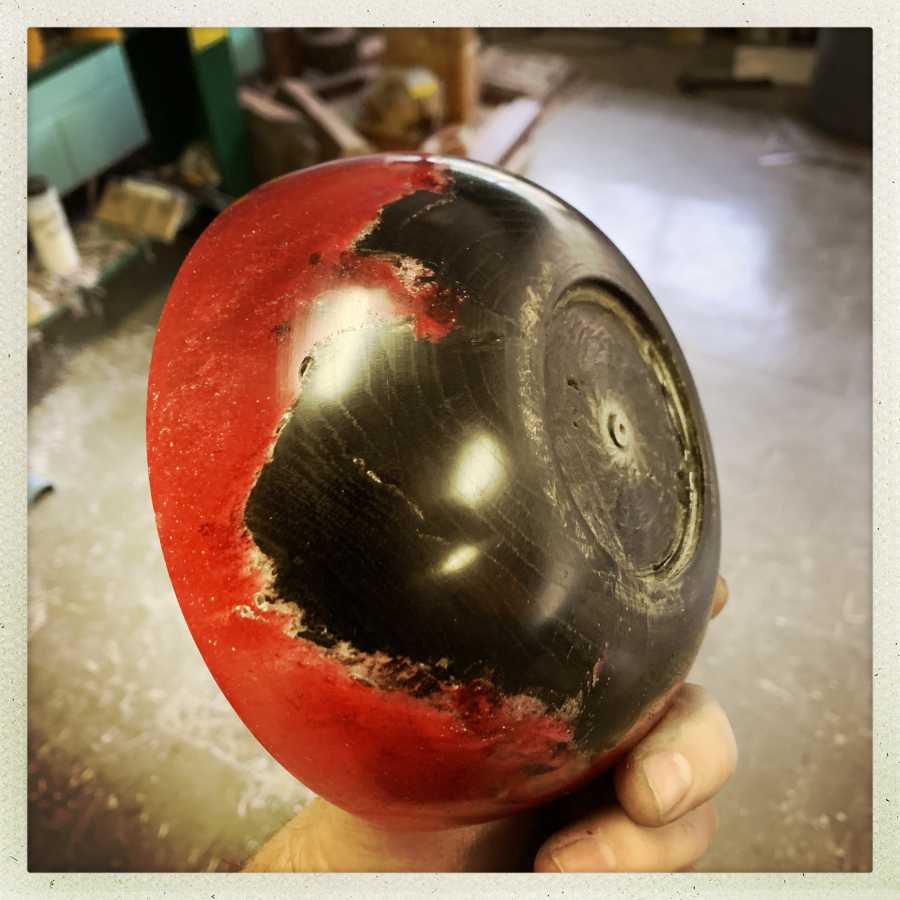 There are still a few voids but I’m going to stop before something goes horribly wrong. The edge of the bowl is a bit thicker than 1/4″ (6mm) and you can see your fingers through it. The flake and pigment in the red make it a bit obscure but it’s pretty cool.

This was an experiment to see what turning resin/wood composites was like, and I am pleased with how it came out. I am not blown away by it but pleased is good enough because now I can think over my process and do something I know will be better. One of the primary things I’ve realized is to get a chisel on it before it’s completely rock hard. Also, smallish areas of resin are less dramatic. And the clarity of the resin is a shame to waste (thanks to Gilliel for illustrating that!) so to summarize: you need to think in terms of dramatic composition. I have a flat of oak log that is quite dry and split, so my plan is to split it with a couple whacks of axe, then glue the pieces to a piece of plywood, like it’s exploding, and pour clear resin into that. That should give plenty of visual drama.

The next couple weeks I am going to focus on the other set of shop doors and getting the propane and forging presses moved to the new building. I’m way behind on my schedule but I guess it’s the Trump administration and coronavirus’ fault.

How did the resin get through to the counter-top? It’s pretty fine and watery stuff; it just soaked right down through the oak. Oak is pretty porous and the bog oak is unsealed.