One of the big surprises of the cold war was how effective the Soviet intelligence apparatus appears to have been.

It’s understandable that the US is sensitive to the theft of intellectual property; it’s a nation that started its industrial revolution based on stolen French, English, and Scottish technology. In principle we know how expensive and economically devastating it can be to have another power parasitizing one’s research and development efforts, but our “let’s get it done!” attitude toward technology since WWII continues to result in massive and constant leaks. Keeping technology and processes secret is difficult, especially if the process is militarily important – but the US’ counter-intelligence has been quite poor. Perhaps that’s a result of the US’ intelligence agencies preference for going on the offense: the CIA and FBI were busy overthrowing other governments and doing domestic spying while the NSA backdoored everyone’s computers. Unfortunately, the FBI’s approach to counter-intelligence appears to have been severely blinkered by racism rather than following any kind of comprehensive (or comprehensible) strategy. For example, the FBI’s attempts to stop Chinese technological espionage in the last few decades appears to be based on whether or not someone looks Chinese. It has resulted in some pretty notable embarrassments for the organization and has accomplished nothing in terms of securing intellectual property. 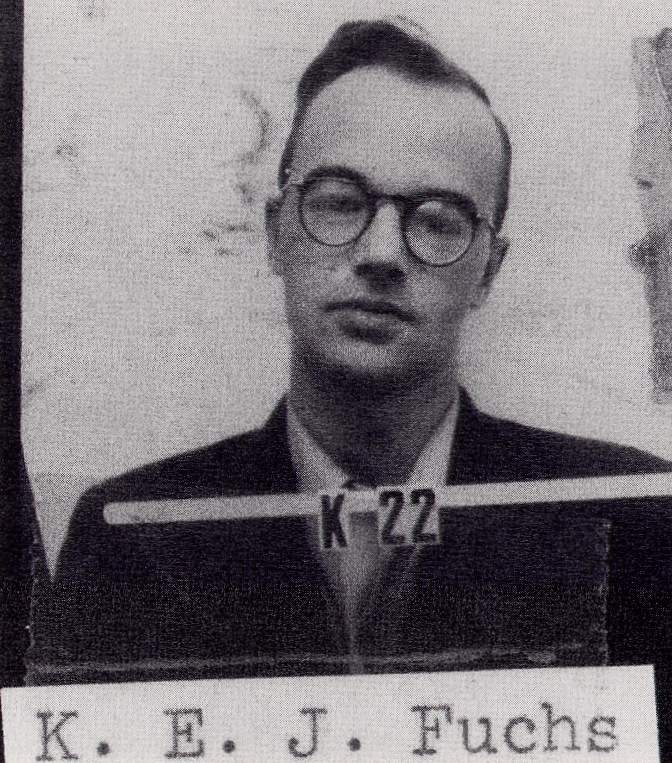 Many have heard of the Rosenbergs, who were part of a Soviet spy ring aimed at the Manhattan Project. And if you’re into this stuff, you’ve probably heard of Klaus Fuchs “atom spy.” But it turns out there were lots more spies, including “inside the wire” at Los Alamos. The most recent revelation involves Oscar Seborer, codename “godsend”, who was possibly the most important of the lot. The Rosenbergs’ intelligence appears to have been summary – i.e.: they were reporting on how the project was going, overall. Fuchs’ intelligence was theoretical “yes, it’s possible and here are things you need to think about.” Seborer was one of the engineering team that built the firing mechanism for the explosive lenses. Even today, information about krytrons and bridge-wire detonators is restricted stuff and is probably a trigger-word for the endless pointless internet searches performed by the US intelligence apparatus. Don’t start trying to buy any, that’s probably the cut-off point.

The size of the Manhattan Project is surprisingly huge, when you start getting into it: with thousands of people involved, it was inevitable that there would be people with divided loyalties. What’s interesting to me is the apparent ease with which the Soviets found agents – to date, there are at least five insiders who were passing secrets out of the project. Seborer’s materials would have been particularly important since he’d have been offering shortcuts to the most difficult parts of engineering the device. Accounts I have read of George Kistiakowski, the project leader for the explosive lens development, are that Kistiakoswski nearly worked himself to death over the course of a year, trying to figure out how to do flawless spherical implosion. One part of the problem is that you need ultra-stable high explosives that can be machined to high precision after they are cast in a vacuum to remove all bubbles. Then, you need to simultaneously – with nanosecond accuracy – detonate the dozen or so explosive lenses so they produce an even shockwave. If that’s not enough, the bridge-wire detonators take a lot of current and the wiring needs to be fail-proof; the final version of the “fat man” bomb had a parallel set of detonator wires that was insanely complex. 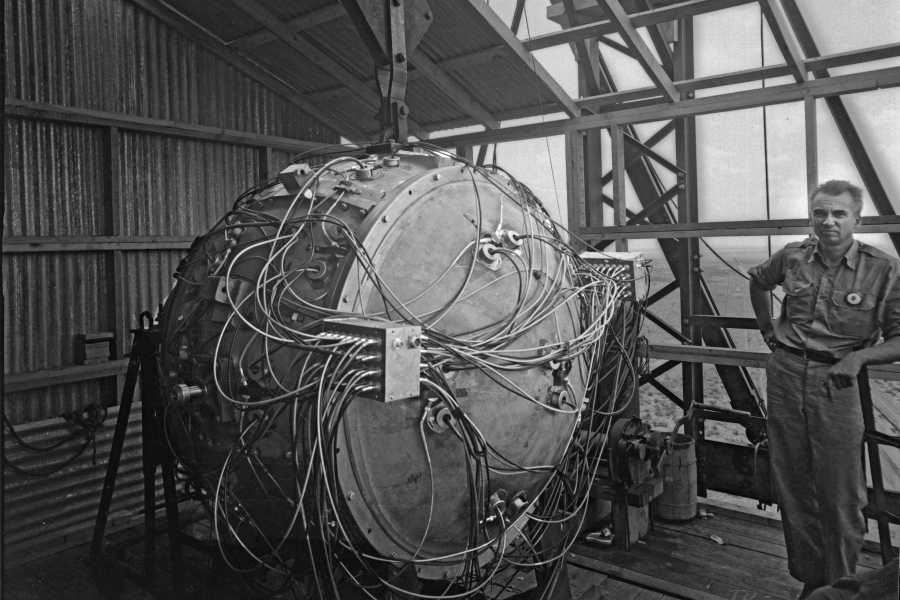 That’s “The Gadget” – the prototype implosion bomb used at the Trinity test. The patch panels on each side are, presumably, the redundant firing system(s). I read somewhere that Harold (“doc”) Edgerton, the inventor of flash photography, consulted in producing the high-speed/high-power switches necessary. There was a large involvement in the technology, so I suppose it was inevitable that some of it leaked. But now it appears that most of the important innovations were leaking in real-time. Even with the knowledge that was leaked to the Soviets, it still took them 4 years to implement their own version.

In intelligence terms, the Soviets had a near-perfect view into the Manhattan Project: they had multiple corroborating sources, so they could be fairly confident that they were not being fed disinformation or inaccurate information. When you have 5 spies in a project and they are feeding you consistent data, you’re even able to tell if someone is deliberately disinforming you, because their version starts to go in a different direction. 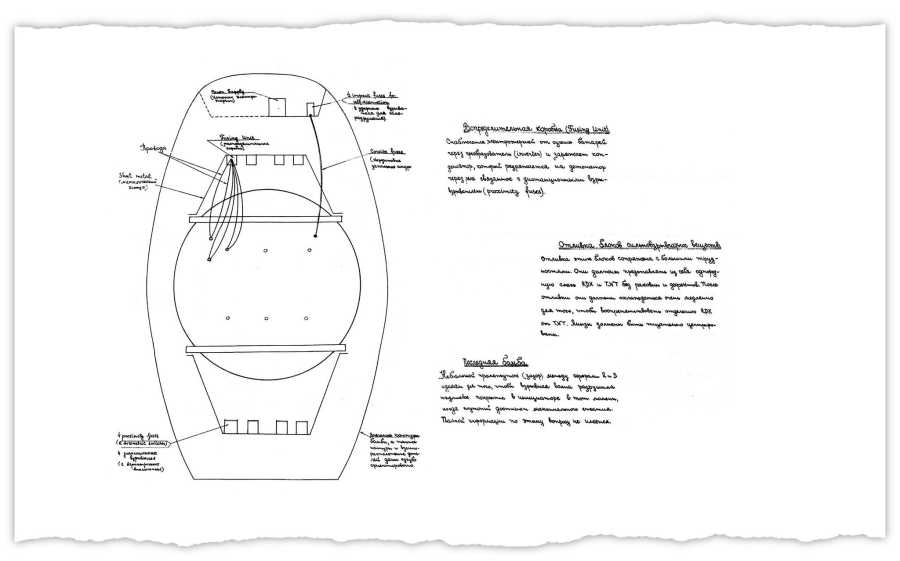 The NYT has some articles about Seborer, but there’s really not much known about him or his work, it seems, so the articles have a lot of back-fill. [nyt]

One interesting tidbit is that the information that broke the case came from the legendary VENONA intercepts. VENONA was a famous cryptographic breach in which the soviets made a horrible technical error and re-used a bunch of one-time pads. Correctly used, the one-time pad is a perfect cipher, but the soviets used the same one-time pads for ordinary communications with one of their surveillance trawlers in the 50s that had also been used in the 40s by their atomic spies. Amazingly, an NSA cipher analyst remembered code-groups of ciphertext and was able to initiate a process of decoding both the old texts and the new ones. For a code-breaker this would be like finding a retroscope and a Rosetta stone, in one. [NSA] Generally the KGB had good trade-craft through the cold war, but re-using one-time pads was one of their biggest errors. Digging through the VENONA intercepts it became possible to figure out who some of the Manhattan project spies were. It appears that the FBI was able to identify Seborer as a spy a long time ago, but the information was kept close because it’s embarrassing how leaky the nuclear program turned out to be, and how ineffective the FBI’s counter-intelligence was.

American codebreakers working on Venona found that the Manhattan Project had been penetrated by Soviet spies, which gave it the codename “Enormous”. They found references to codenames for three Soviet atomic spies working at Los Alamos: “M’Lad”, who turned out to be Theodore Hall; “Caliber”, who was David Greenglass; and “Godsend”, who was ultimately identified as Oscar Seborer. Since Klaus Fuchs was also known to be a Soviet spy, there were at least four Soviet agents at Los Alamos.

To be a bit fair to the FBI, the NSA is not exactly forthcoming about things like VENONA, so they had to pursue their end of it without help of a retro-scope.

One of the things that has always interested me is the simplification that there are “nuclear secrets” – there’s a secret plan for an H-bomb, somewhere. But, there really is a gigantic cloud of secrets, most of which are engineering processes and techniques. As Richard Feynman once said, “the only secret is that it works at all” by which he meant that if you’re a theoretical physicist genius like himself, you can ignore the all-important engineering details that thousands of other very smart people had to figure out.

During the trial of the Rosenbergs, the US government argued, ridiculously, that they were in part responsible for the deaths of US troops during the Korean War. It appears in retrospect that Ethel was guilty of knowing what her husband was up to, and not stopping him. Ethel was killed by electrocution, and her execution was nearly botched: they electrocuted her, but her heart did not stop so they hooked her back up and gave her current until she began to smoke and her hair was catching fire.

One of my favorite Manhattan Project photos: that’s an image produced with the help of Doc Edgerton, of the implosion lenses propagating their explosion. I would love to know how that was accomplished (the photo, not the implosion). Another image from the Manhattan Project that I have seen but can’t seem to find right now is of George Kistiakowski and some of his tests. To test the early versions of the lenses, Kistiakowski used cast iron balls about the size of a basketball. His mission was to implode explosives around the cast iron to compress it down to about the size of a grapefruit, and he’d know he’d gotten it right if the cast iron was nice and smooth. Think about that! What an insane accomplishment! Next up: Now make a bunch of explosive lenses that can carve a copy of Rodin’s The Thinker out of a block of bronze. And hurry!

The Ongoing Saga of The Doors » « Uncommon Sense: The Ballot Or The Bullet