I’m a hoarder of certain things; I admit it. Somewhere I have source tapes for Peter Langston’s Empire game, just in case someone wants to reconstruct that piece of history for a modern system.

That’s just one example; here’s another: You can buy a complete release of the Pacifica Radio Archive on a teeny USB stick, for about $100. Or, well, that’s what I paid for it, anyway. I was listening to some long-obsolete podcast from the early days of podcasting and Pacifica said “now, if you donate $100 we’ll send you our complete radio show archive from the 70s!” I couldn’t find the link on their website so I finally just picked up the phone. After some confusion, the poor person from Pacifica realized I was responding to a 6 year old offer, but they agreed to take my money, anyway.

I like to imagine that people appreciate it when someone interrupts their busy day by saying “I am so in love with your stuff, please help me get it?” I feel that way when someone asks me about a knife; they are probably overwhelmed in details, thinking “what have I started?” Anyhow, I know that radio shows like Pacifica always need money; that’s not a new thing that has been true since at least the 80s when I hung out with some of the JHU Radio crew, who would have cheerfully traded their souls for a new box of patch cords, let alone a microphone. 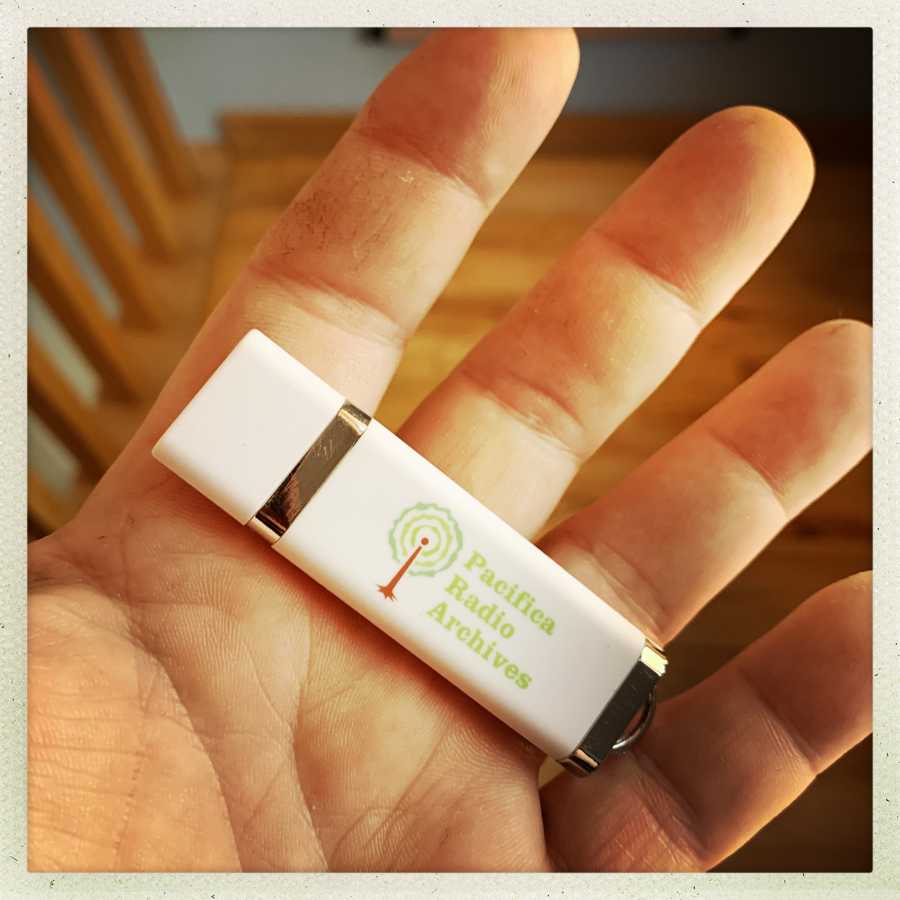 That little USB stick contains all of Pacifica Radio Show’s Archives. I bought it specifically because it had a bunch of never-before published talks by Howard Zinn. But it’s all the interviews, all the meandering lectures, it’s a distillation of the golden age of community radio from San Francisco in the 70s, when you could walk down the street, bump into Margaret Mead or Angela Davis and ask them if they’d drop by the studio for an interview that evening…? Maybe…? (oh, god, please!)

It’s the San Francisco that was a beacon of coolness and weirdness when I was a kid; the place I wanted to run off to. Before it was taken over by the soulless dotcom assholes who commute in and leave nothing of value behind.

Perhaps you remember Alan Watts – the mystical buddhist philosopho-weirdo, who had a radio show where he would philosophize, live. If that’s what you call it. It’s an important view into the counter-culture: Watts and DT Suzuki’s west coast interpretation of buddhism has had tremendous influence on the formation of american buddhism – the de-religion’ed religion that has helped many people bamboozle themselves. It was Watts’ show that got me interested in zen, around the same time that I first began to study iaido and was realizing that a lot of the great samurai (specifically Musashi) were unhinged and probably struggled hard with madness their whole lives. I’m listening to a bit of the Watts at random, now, and it sounds like whagarbl to me – apparently my philosophy has become more disciplined, or structured – or ossified and dogmatic. I don’t know and I don’t care anymore – his voice is still one I could fall asleep to and a little nagging voice in the back of my mind tells me that I bet it’d go well with a big ole hit of opium. [I have resisted giving the dragon a claw-grip on me: opiates and cocaine are the kind of drugs that are deadly to someone with an inquisitive nature who likes to explore limits] [But I bet it’d go well] There are .MP3s of all the episodes of Watt’s show on this little USB stick.

There are 10 previously unpublished speeches by Martin Luther King, Jr. I only just now noticed them. Let me predict the future: I will be quoting some from them, for us all. It’s hard to find complete speeches by MLK, or it used to be – the family held closely to the copyright, and it was (for a long time) hard to get a complete audio of the “I have a dream” speech.

And over in this folder: “Black voices…” holy shit, it’s Huey Newton and Bobby Seale. Kathleen Cleaver (I had a huge crush on her when I was in college)  And over here’s Molly Ivins, and a whole folder of Tom Hayden… There are Malcolm X speeches, too, and interviews with Joan Baez

Here’s the link: [KPFK] – it appears the archive is not currently available, but I bet if you email and beg, they’ll take your money.