The US’ way of waging war is to build outposts in semi-safe locations, then venture forth to battle using its tremendous mobility advantage.

That strategy evolved during the Vietnam war, and it was a consequence of the problem of force protection. At its root, it’s a logistical problem; it’s the “quagmire” that US forces were flailing around in, but nobody saw it early in the war.

The previous two wars for the US were WWII and Korea, which were mobile wars of attrition characterized by large engagements, large maneuvers, and large battle-lines with clear(ish) “front” areas. You knew where the enemy was – they’re right over there – and you knew where your safe areas for logistics generally were. In that context, the “Battle of the Bulge” was notable to the allies because it was one of many times in which the Germans called the safety of rear areas into question. The Korean war had a lot of similar experiences – US troops got caught on their back foot (i.e.: they were over-extended) when the Chinese army crossed the Yalu, and suddenly they discovered that “behind the lines” was not safe space. That sort of mobility warfare was hardly a thing in WWI, which was characterized by static lines of trenches defining a clear front, and safe logistical zones behind the front lines. The US army’s experience in Korea taught that it’s necessary to assume you might get suddenly attacked, so your “behind the lines” areas need force protection all the time. 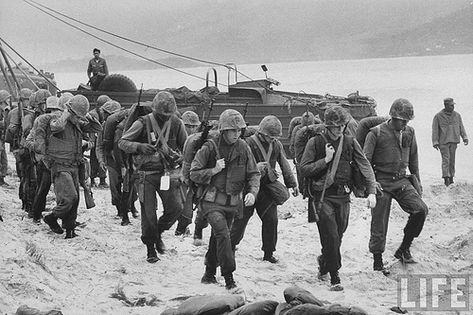 March 1965, the beginning of the fucked up beach party

That’s where the quagmire comes in: when your forces are deployed as a cloud of small defensible strong-points, you need one extra soldier to protect the logistics for the combat soldiers. If you have a fire base with 500 troops, you need 100 doing logistics and 100 doing force protection, to keep enemy special forces or sappers from sneaking back and shooting up the logistics. A lot of americans don’t realize that the marines did their celebrated sea landing near Da Nang in order to provide force protection for the air base that was evolving there. They weren’t troops that were going to go out and do things, they were just there to keep the Vietcong from blowing up a bunch of extremely expensive aircraft and ammo dumps. And maybe some pilots and REMF, too. 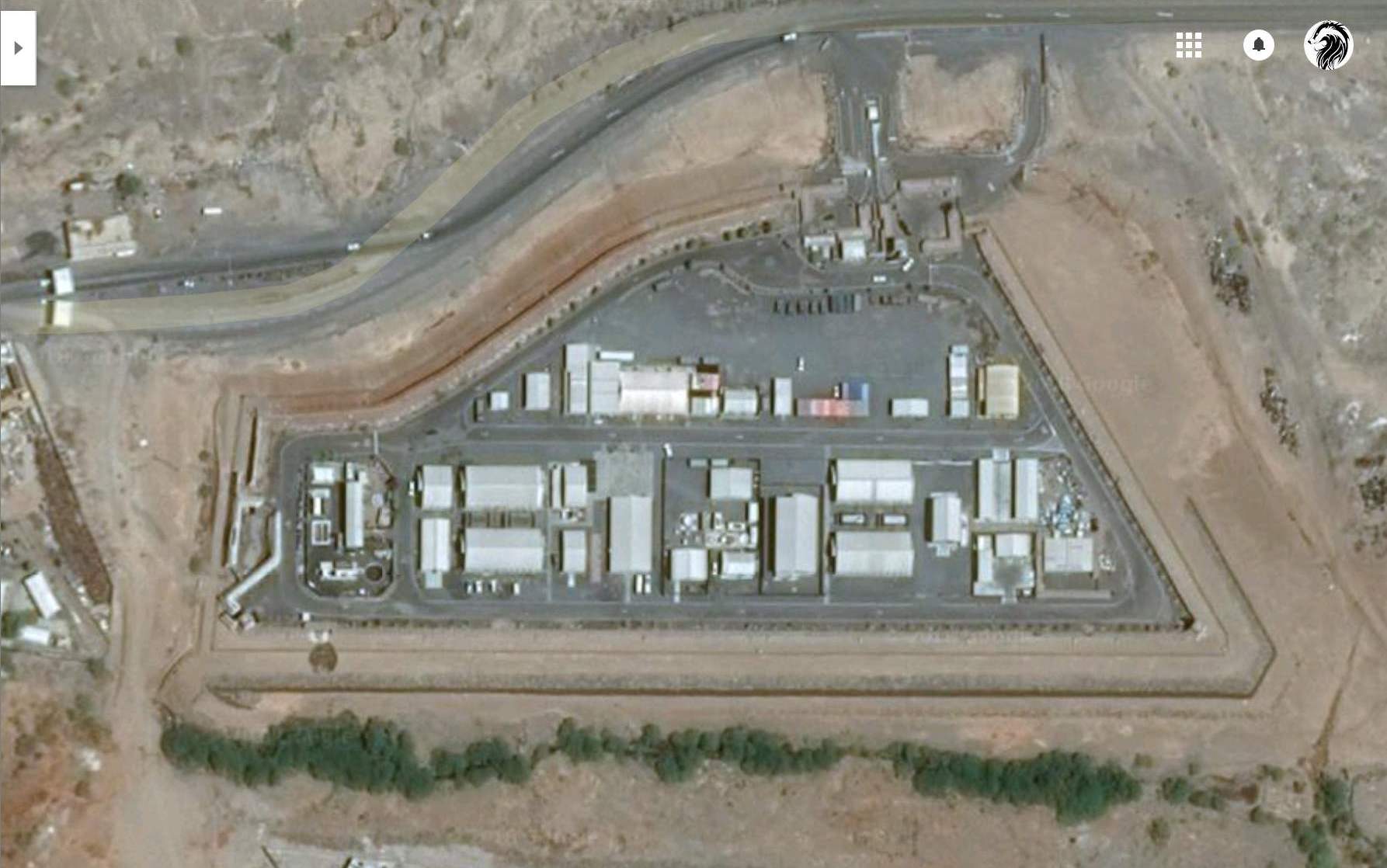 The Vietnam-style war without front zones became a matter of building “firebases” and air bases that were like Fort Zinderneuf (exactly the same strategy, done by the French in Algeria) from Beau Geste. The base needed to be defensible, which means a lot of manpower and money spent building defenses, clearing fields of fire, etc. Inevitably it becomes more efficient to have fewer, larger bases, which means keeping them further back from where they are likely to be attacked. Eventually, you reach the final evolution: large bases in another country entirely where they are “safe” from attack, and you just fly your drones over the border, or hop in and out with helicopter-loads of special forces. 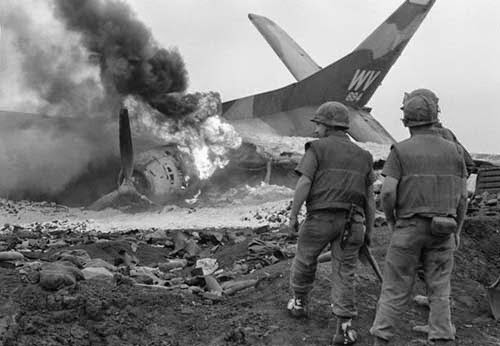 Khe Sanh: “what do you mean ‘our runways are in range of their artillery’?”

It turns out that the firebase architecture has problems against a resolute and numerous opponent. The US got out of Vietnam when two things happened, more or less simultaneously: the Tet Offensive and the attack on Khe Sanh. The Tet Offensive was an assault against Saigon, which the US had been treating as a “safe zone” for R&R and military bureaucracy – the NVA infiltrated about 5,000 soldiers into the city and they attacked, simultaneously, during a holiday. Khe Sanh was a huge base that served artillery and air support (and logistics) which was brought under attack and suddenly the marines defending the place realized that they were going to have to defend it a lot harder because the war had just come to them. The Tet Offensive had an even greater impact as it sank in to the US military’s reptile brain that it was not possible to turn a city the size of Saigon into a fortress. 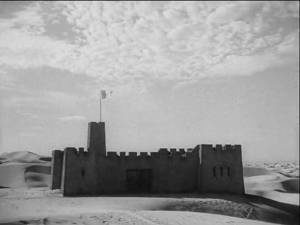 The quagmire gets worse when you get a sock in the nose like at Khe Sahn, and you fall back on your walls and ask for more troops to defend the outpost. Suddenly, it costs more to have the outpost than it’s worth: if you need 5000 troops to defend your REMFs, it looks cost effective to send them home. But that triggers a hunkering down and an undeployment, because eventually you don’t have enough troops to man the walls of the fort. When that happens, the spectre of Dien Bien Phu begins rattling its bones and wailing in the distance – if you don’t have enough troops in the fort, you get cut off and wiped out and the survivors are paraded past the cameras as your imperial hubris is revealed to the whole world.

That’s what I think is driving a lot of the panic in the US military command structure. What happened in Iraq was that ‘protesters’ were allowed into the “green zone” – i.e., behind the walls and into the safe area, where the embassy is/was. Realizing that could happen profoundly shook the US’ what-pass-for-strategists, who saw that they couldn’t trust the green zone and were going to have to build a fort within a fort (and a little fort within that fort) (and…) The US realized that it was staring down the barrel of major Iraq quagmire and they were either going to have to re-commit large force protection units and re-militarize a new perimeter, or they were going to have to leave. So, they assassinated the guy who was on the other side of the chessboard. That’s not going to work, either (the US tried to assassinate NVA general Van Giap, too) but it’s the kind of move that immediately comes to the mind of a bad strategist. 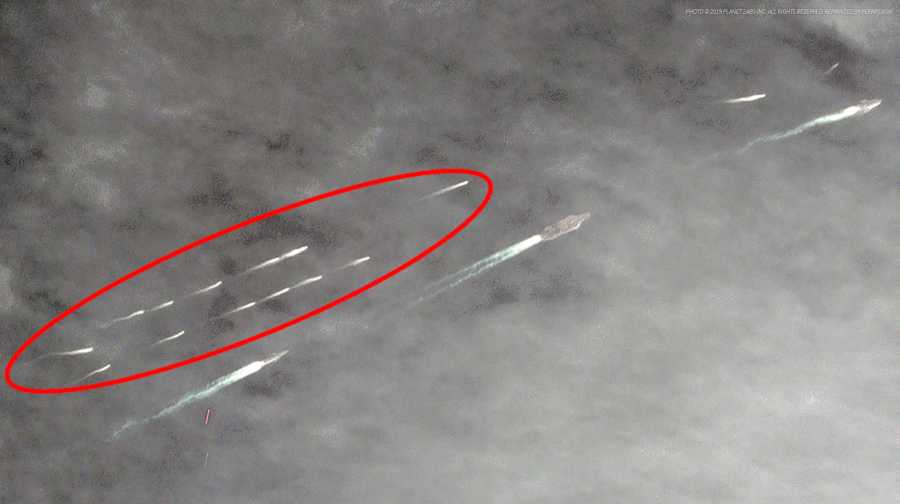 Right now, the US military is realizing that it’s completely over-extended, and has small units of extremely expensive stuff sitting around with relatively easily defeated force protection. There are US navy ships sailing around the Straits of Hormuz, and everyone knows the navy are a bunch of overconfident incompetents. There are drone bases, special operations bases, artillery parks – and suddenly the equation has flipped from “we’ve got 2,000 hardasses guarding that base” to “one ballistic missile could total that base and the 2,000 hardasses so we need to get an antimissile battery in there as soon as possible.” Except the antimissile batteries need force protection, too. Khe Sahn happened when NVA artillery waited for a C-130 to come in on a landing approach, then dropped high explosive shells in its path. Suddenly every US air asset in the middle east is realizing that they’re a) a military target and b) when they are landing or taking off, they are lunchmeat for anyone who sneaks a MANPAD within a couple miles of the air base.

The immediate reaction by the US military has been to retrench and put its force protection on a high alert. Obviously, they won’t be able to do that for long. The NVA waited for Tet (Vietnamese new year holiday) because everyone would be at a low alert, and used to seeing masses of people moving around. The US has brilliantly ceded the initiative to Iran and has not only done that, it’s hunkering down in well-mapped locations. Fucking idiot Trump has hung them out to dry. I hope the threat of US retaliation will keep the Iranians from severe escalation, but the least-worst thing we can expect is some very expensive cyberwar. A missile flattening the US embassy is more likely; they won’t use a truck bomb or anything primitive. They probably won’t go after an aircraft carrier or a navy ship because US navy ships unpredictably carry nuclear weapons and damaging an aegis boat carrying H-bombs would be too big an escalation.

As the US military hunkers down and tries to figure out what the dipshit in the golf cart just did, its ability to do anything else has dropped to zero. What’s left of ISIS has a season pass to move about safely and freely; the Americans are going to be too busy covering their own butts for a while. In one move, Washington has politically neutralized its own forces, as well as exposing their piecemeal deployment to attack at any point.

If the Iranians want to avoid escalation, they could simply point that out: “the first things you Americans do when you’re threatened is to dig a hole and cower in it, while raining high explosive on weddings from a safe distance; you’re contemptible. And you’re vulnerable. Go Home.”

I wrote this yesterday morning. As of now, the Iranians have used medium-range ballistic missiles from inside Iran to strike one of the airbases in Iraq that the US has troops stationed in. No word of casualties, yet. Basically, the Iranians chose the Khe Sahn option, but have not followed up with more strikes. It’s a fairly proportional response and it sounds like everyone got lucky and no US troops were killed, which allows everyone to de-escalate without loss of face.

I wonder if the Iranians included some cratering charges in the mix; those are specially designed submunitions that blow big holes in runways. It’s possible that the US troops in the air bases are effectively stranded. Being a small(ish) force in an entire country; that’s the Fort Zinderneuf scenario.

Sun Maple » « A Little Elephant In The Room