It’s impossible to say for sure, but Trump appears to be suffering from late stage dementia. Of course, that won’t matter to anyone in Washington; if they’re willing to look the other way while he commits ridiculous crimes, they certainly won’t even deign to notice his brain melting.

They know it’s what’s happening, of course. Such monumental cruelty to stand back and watch a monumental shitheel fall, slowly, from the pinnacle of the power he stole in the ultimate grift. He’s so repugnant that he gets no pity from me, even though I think we’re dealing with an involuntary medical condition, not a lifestyle choice – as he burns like a tallow candle (dimly, with a lot of smoke and a lingering smell) he’s able to do what he learned how to do: grift and lie, it’d be sad if he wasn’t such a complete and dangerous asshole.

But nobody (apparently) said, “Sir, a few weeks ago, you couldn’t tell the difference between Al Quds and The Kurds – maybe you’re not equipped to make life and death decisions any more.”

Even his supporters have got to be irritated by this shambling wreckage. When Ronald Reagan’s alzheimers’ started kicking in, his supporters realized it and hid it, letting the president have a good nap in the situation room while the people who really run the country anyway did what they wanted to do. Shove Trump out on a golf course and he’ll do what he’s good at. I.e.: he’ll cheat at golf, too. In literature and film there is a trope of the aging dotard king, whose intimate advisors know perfectly well what’s going on, and commit a “soft coup” by fobbing them off with wine, or harem girls, or cheeseburgers and Fox News. This is nothing new, but it’s still a manifestation of the cruelty that the power-mad are capable of. 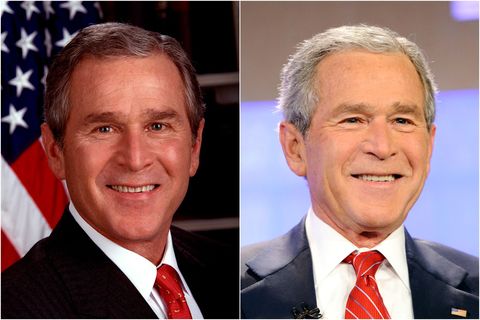 The stress ages you more than the cocaine

And the madness for power stretches across both sides of the aisle. Watch the pathetic democratic party debates and what you’ll notice is a bunch of gerontocrats and billionaires. The emphasis, nauseatingly, is on the money, but Bloomberg (not a real candidate) is 77, Sanders is 78, Warren is 70 and Biden is 77. I’m 57 myself and I can no longer move or think like I used to; I can’t imagine what 77 is like but when I’m 77 I’ll be lucky if I can exercise my imagination at all. Perhaps this is just hereditary fear: we tend to succumb to Alzheimer’s in my family. My dad, at 84, is still going strong but my grandparents both died of Azlheimer’s and my great-grandparents may have, too. My dad’s mind works well enough that he knows that it doesn’t work like it used to. If the democratic gerontocrats were honest with themselves, they’d realize there is something profoundly wrong with them, at their advanced ages, squabbling over the brass ring. Leave that for 40 and 50-year olds; it’s a young person’s game. It ages you; and – seriously – Biden hasn’t got a lot of additional margin for aging.

Alexandria Occasio-Cortez would have a good chance of running for president (except her party would kill her campaign, and is already hard at work trying to neutralize her future) except she’s too young. But you can be positively decrepit and still run for president. Trump’s too old and losing his mind and it sounds like he’s had a heart attack, Bernie just had heart surgery, and Bloomberg’s trying to buy a soul and get it installed in his empty husk.

None of these people should be trying to grab at political power at their age; they’re not mentally healthy. Mentally healthy old people don’t sit around counting their money and wondering if they can buy a high office: they write books, teach young people, fish, and play golf. I’m sure that if Joe Biden starts to lose his mind, he won’t start drone-striking anyone who blocks him on twitter – but why are we even taking the chance? If your great grandpa told you that he’s joining the local soccer league, you’d try to talk him out of it, right? It’s not unfair to point out that great grandpa can’t cut turns and kick like a 25 year-old, any more.

I feel worried as I write this, because it’s “ageism” but I also feel it’s appropriate to raise the topic as a matter of concern. There’s something horribly broken about our political system that the old farts simply will not let go of power until they’re dragged out in a box. Nancy Pelosi has nothing on Strom Thurmond, but remember: we used to consider him a dinosauric racist out of the mists of time – then, what is she? The world belongs to the young, as Greta Thunberg tried to remind them. We shouldn’t have to sit here praying for an asteroid impact to end the age of the dinosaurs. It’s only fair since they’re the ones that are going to have to try to clean up the mess.