I loathe the whole christmas-expectation-of-being-given-things, and I usually try to break Hallmark’s lock on my time by just doing whatever I want and sometimes randomly giving people stuff.

My farm has a large area of coal mine tailings and tip from where there was a deep mine that closed in 1920. Today, what used to be the high wall has collapsed and there’s only a small opening, which is used by Robert Cat – a palatial home. In the snow you can see his tracks to/from the entrance. Over at the side of the tippings is an area where I suppose they were first digging the mine – there is a lot of sulphur coal (nasty stuff to burn, bad for lungs and environment) and it contains a lot of fossils. I mean, it’s all fossils, but the limestone rocks have a pretty good selection of the same plants that made the carboniferous period a boring time on Earth – it’s just lots and lots of little bits of leafy symmetrical stuff that looks like locust tree.

This morning it dawned on me that for christmas, I could literally send people chunks of coal. I don’t relish the idea of digging around in the snow and cold, though. Maybe I’ll try to remember to collect a sample next summer so I can wiseass next Christmas. “Here! It’s a fossil!” 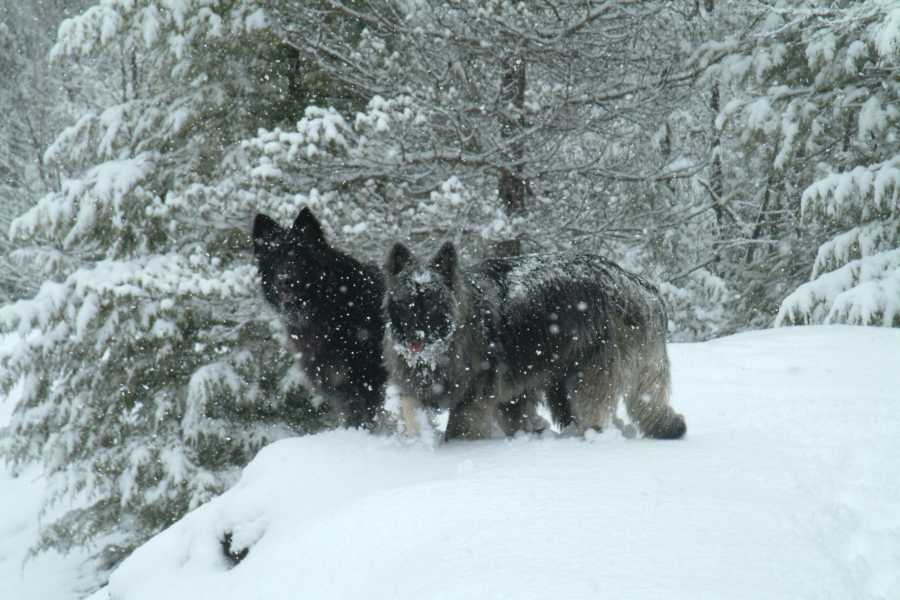 Miles and Jake playing in the strippings, winter of 2005

It’s snowing right now and I’m stressed out because I know it’s blowing in the open door of the metal shop. Fact is, I did not get the doors done and hung soon enough, and now it’s really shitty weather to do woodworking and run wire in. I was having too much fun making things and did not put enough work into setting up infrastructure. The machines should be OK; I’ve layered everything with lots of WD-40 and wrapped them in tarps. It makes me sad with a deep sense of failure as though I was the proverbial grasshopper singing and having fun instead of doing what needed to meet nature’s schedule. 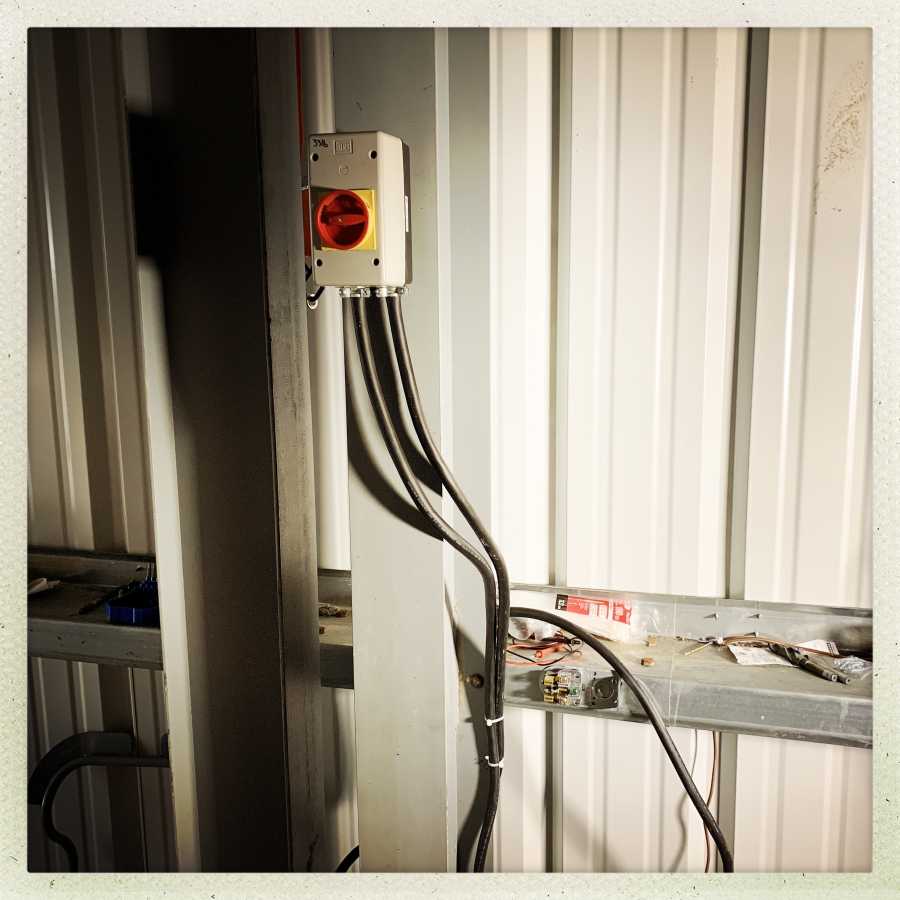 I put the power switch for the trip hammer up on a beam about 6′ from the machine. I don’t want to be near it when I turn it on; this seems like a good way to encourage safety

The awareness of things incomplete has been toxic; it’s hard to sleep or relax, and I feel like instead of doing anything, I ought to be out there running 220V wires as the snow blows around me. Some idiot bought a steel-framed building instead of using nice flammable wood, but that means every wire I want to mount on something entails drilling holes in steel and using my numb, awkward, fumbling fingers to get washers and nuts on the back of little bolts to hold it all together. I know this is not Jack London’s To Build A Fire, which was a traumatic bit of reading when I was a kid, but it feels like it; I’m a computer programmer – my idea of hardship is when I run out of cloves for my hot cider/fireball bedtime, uh, hardship. See why I feel guilty? Who am I kidding? My life is as close to perfect as it can get and I’m complaining about handling cold miserable jagged steel in howling wind.

I’ve been running the wires under the horizontal stiffeners, which is great except that means I need to drill holes for retaining tie-wraps every so ${distance} and make largeish (5/8″) holes for the wires to go in and out of. All of that drilling is really time-consuming; if I was working with 2x4s I’d just blast holes right through with the drill, and lace the wire. Instead, I have to drill a pilot hole, then the actual hole, then grind down the edges so I don’t cheese-grater myself on the razor-sharp steel, etc. It’s a time-factor of 10x worse than wood, so it means I am making progress very slowly, which just makes me more miserable and inclined to hide under the covers. And look at me complaining! PZ lives in the frozen wasteland of Minnesota, where my Norwegian forebears fetched up because the nice guy at Ellis Island wanted all the scandinavians to go freeze to death, or something. Scandinavians were not as highly valued by American fascists, once upon a time. But if I think about it, I can summon the ghost of my grandfather to stand over me while I work, which really makes me feel miserable: “back when we were building hangars for the air base in WWII we were nailing and hauling plywood in -32F you kids with your global warming don’t know anything. Get cracking.”

All of this adds up to me realizing this morning that: I haven’t done anything for christmas except slice myself and bleed and I have precious little good cheer to send around. And time is running out. I have the ingredients for massive amounts of caramel corn, stacked down in the kitchen, but the stuff will not assemble itself. I have laundry to do and a washing machine on the blink (literally: it has a light that blinks to say “something has gone horribly wrong, what is why I am sitting here full of water.”) Holiday cheer. Then I realize that: my family is getting together, and I don’t have anything for anyone. What to do?

Now I know what I’ll be doing tonight. I have some lovely birdseye maple, and I have sharp chisels, and a lovely great big cast iron monster of a wood lathe. I’m gonna make some deely-bops, polish them and oil them, and epoxy little wire loops in the top, and declare them “christmas tree ornaments.” I mean, FFS, a wood lathe is a machine for churning out wood deely-bops. Why had this not occurred to me before?

My posting and commenting may get a bit flaky over the next few, because I’m going to be running wire, cutting deely-bops, making caramel corn, and my buddy Mike G who is an amazing woodworker is coming out to help me make some doors for the forge. My cup runneth the fuck over, and so runneth also my nose with snot.

By the way, that was my grandpa’s sense of humor for you: when you’re a kid from New York, visiting the ancestors in frozen St Paul, Minnesota, they hand you a copy of To Build A Fire and say “this may make you feel better.” Seriously. Ha, fucking, ha.

Now that I’m older and wiser, when I want to feel miserable about cold, I remember the parts of Sergeant Bourgoyne’s description of Napoleon’s army crossing the Berezina River during the retreat. It was -32F, snowing, blowing ice, but the river was broken up – so the engineer corps waded into the water, built a bridge, and died nearly to a man while they were doing it. When someone like Bourgoyne, who had marched from Paris to Moscow, via Borodino and Maloyaroslavets says “that was the most miserable place there ever was” you have to pause and reflect seriously. The character in To Build A Fire had it easy. Kids, these days.

Ready For The Warfighter’s Christmas » « Quotas