Experiments are still my favorite thing to build, because they always come with some new problem-solving sets.

Voyager’s knife was the first experiment I did in end-forming wire rope damascus. The very nature of the wire rope makes it twistable or compressable linearly, but there’s nothing much you can do with the exposed ends of the wires. They ought to make a kind of neat blobby raindrop pattern or something.

It turns out that you get ghostly lines instead. That’s fine. 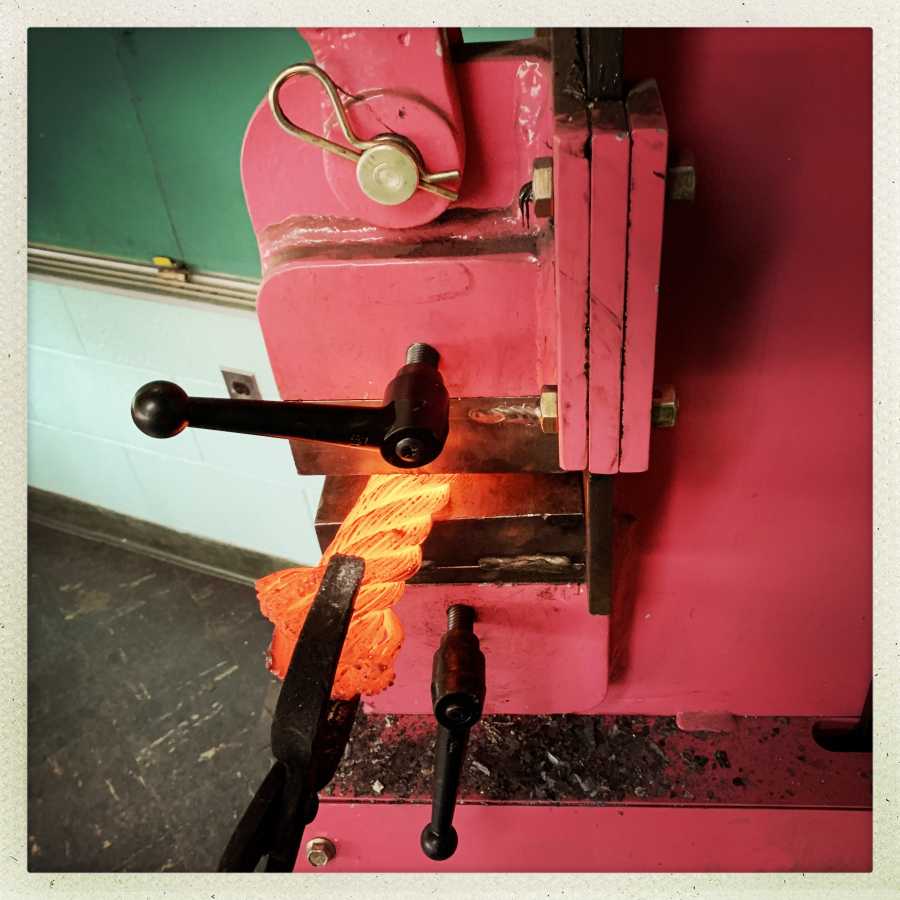 Once you have a chunk of wire rope nice and hot – about 2200 – yellow-hot – you can start to squish it in the press, flattening it successively down one side, then re-heating it and flattening it down the other. The result is a bar, which you can twist (using a great big wrench!) or press at an angle to drive it tighter and tighter. Eventually it welds into a nice solid mass except at the ends; the ends always come out a bit uneven or oxidize too much to weld.

A piece a 1 1/2″ wire rope welds down to about a 1″ x 1″ bar that’s a bit longer than the original chunk of rope. In other words: steel doesn’t oxidize away that much and it’s not very compressible. I put the bar into my annealing tub (a garbage can full of pearlite) to cool down overnight and in the morning it’s soft enough to put on the bandsaw and turn into workable chunks. These days I have a pretty good idea how much steel I’ll need for what, so I just decide what the bar is going to be: a couple paring knives (1 1/2″ chunks) and maybe a kitchen slicer or two (2″ to 2 1/2″ chunks) A little steel goes a long way.

To test the overall weld I decided to try face-pressing a piece. So, I took a 2″ chunk, heated it to welding temperature, and put it end-up in the press, and squished it. Bloop! You wind up with something that looks like a hockey puck with the outline of the two ends pressed up into it. Re-heat and grab it from a different end, and you can forge it right back out into a bar, then forge a tang from the bar, and then flatten the bar to make a knife body. It’s upsetting to be quite frank – you kind of prepare for it maybe exploding and shooting in all directions, but it just goes “moosh” if it’s hot enough. One thing that’s for sure: if the welds in the bar aren’t perfect, it’ll tear apart from the vertical press. 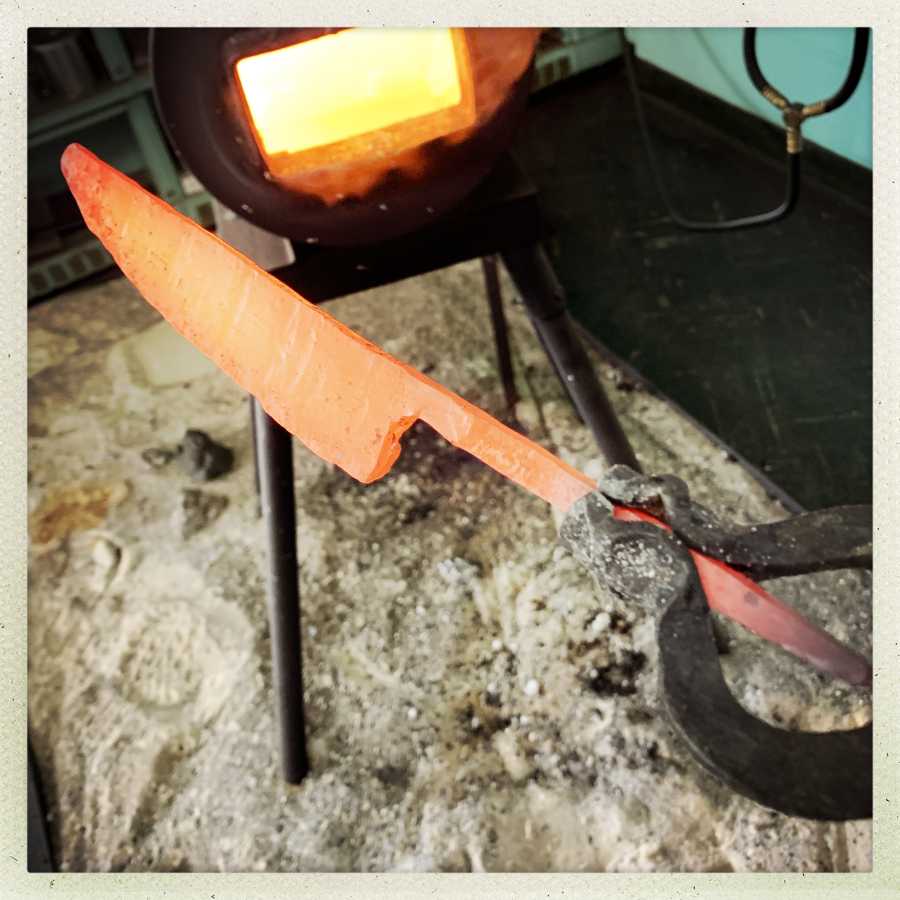 This is also an incredibly fun part of the process: you can easily bend and whack the steel to go where you want it. It’s like a 12-year-old: it never goes exactly where you want it but it kind of shuffles that way. You can decide what you’re going to fix with a hammer, or a press, or maybe you’re just not going to deal with it until you get a grinder on it. See the split where the tang comes from the heel of the blade? I don’t like the looks of that and if it’s still there after another heat or two I’ll plan to grind that area down.

From there, it’s just a lot of successive rounds of shaping and polishing and shaping and polishing and eventually you put some wood on the end and glue it in place and shape and polish that too. You come to appreciate the Japanese idea that everything is endless successive refinement built on each step before, because as you go through the steps your choices make you happier with what you’re doing – or you throw it across the room and start something else.

I quenched this with a nice temper-line so it has a “hamon” like a Japanese sword, that harmonizes nicely (in my opinion) with the inner striations in the wire damascus. They’re hard to see in this picture except as some wavy stuff on the blade near the tip. Those wavies are the transition-zones between what used to be separate wires; there are molecules of slag and carbon that color the steel. This blade should age well; the patterning will come out a bit at a time when the blade works on variously acidic or basic things.

The handle is maple “fiddle back” from the back of an actual fiddle. My grandfather was a luthier and I’ve been hauling around some blocks of his stock that I inherited on his death back in the 90s. I know he had been hauling it around for a while, too. Since I was using violin wood I used violin ebony on the bolster. 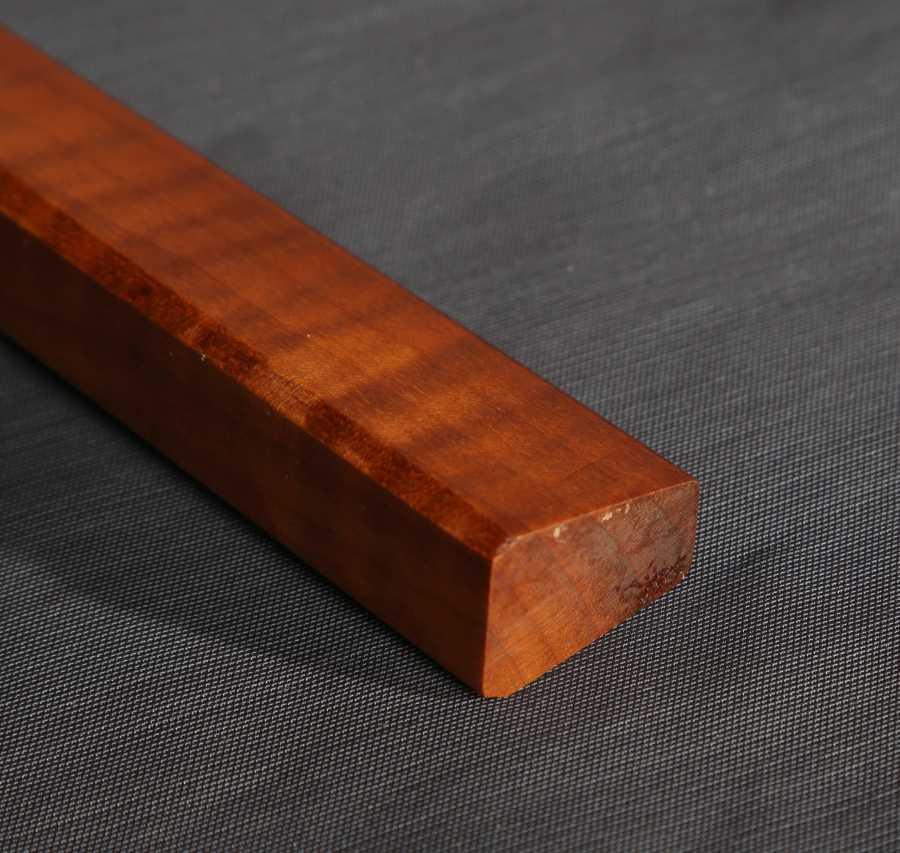 I’ve been having fun with coffin-shaped handles, where the shoulders of the coffin move around and the width changes. It’s a very positive grip and I thought that the big flat sides would be a chance for the maple to shine.