I’m so depressed by politics that I find myself energized creatively. It’s deflection. If I can make something beautiful or tasty, I won’t think so much about how the world has become a playground for the worst sort of people.

This is even easier than pickled beets [stderr], because you barely have to do anything at all. Seriously! This is something wonderful that you can set up and have in the jar in about 1/2 hour, most of which is spent waiting for the jars to sterilize.

There’s a farmer’s market in Clearfield, where you can get yummy stuff. I usually don’t stop because every time I do, I wind up making something. But, if I’m ever standing around thinking “what shall I do with myself this afternoon?” (I don’t do that much: it’s more like “what is on my TODO list?”) I know I can swing by there and get something that will result in a happy project. 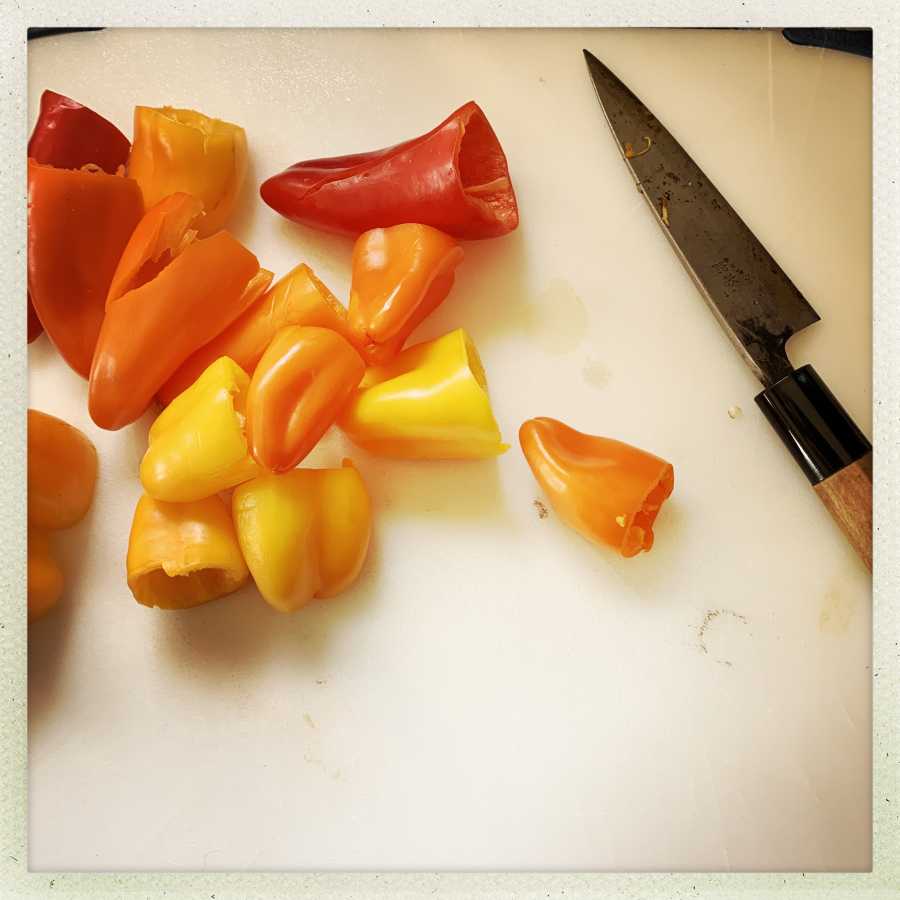 First, you get a bunch of peppers. These are not habaneros, they are baby regular bell peppers. To be honest, they don’t have a huge amount of flavor but we’re going to fix that.

Cut the caps off and pull out the seed cluster. I usually remove the inner webbing, too. Make sure you knock the seeds out or they will float around and ruin the aesthetic qualities of your jars. This will make more sense later.

Congratulations! You have completed the hard part. 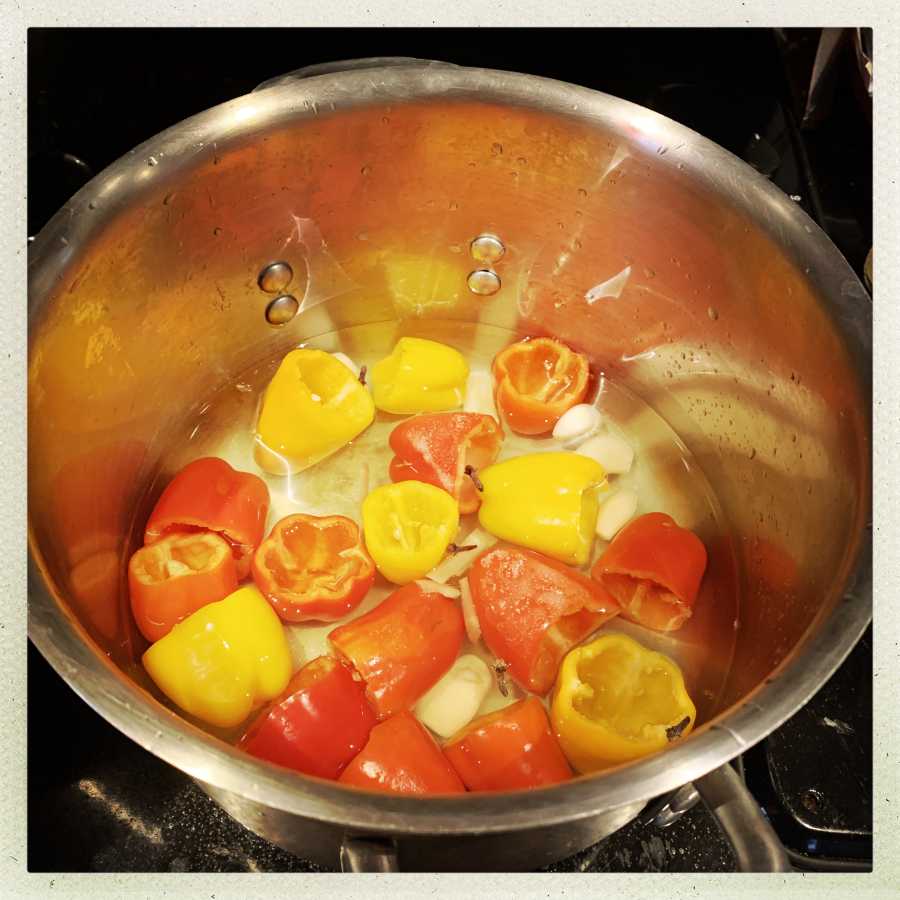 You can probably see what’s in there. But for the record: 1 cup of champagne vinegar (cider or any other vinegar will do just as well but I like the crisp taste of the champagne vinegar) a few cloves of garlic, some pepper corns or cloves (in this case cloves) about 1/3 cup of sugar, a tablespoon of salt, and some water to bring the fluid level up to “will just about fill my jars.” There  are a few very small sticks of pickled ginger in there, too. Just go wild, though you should avoid putting anything in that is fatty; i.e.: leave the bacon out. The pickling will be safe as long as there’s plenty of vinegar and sugar and salt but just think about avoiding anything that’s going to make bacteria a happy home.

In this case I’m aiming for 4 mason jars full of peppers so I added 3 mason jars full of water to the pot. That’s the trick for getting the right amount of liquid! It’s so easy. You don’t want to turn the heat up on the peppers until the jars, which you are sterilizing, have come to a nice boil and have been boiling for about 5 minutes. 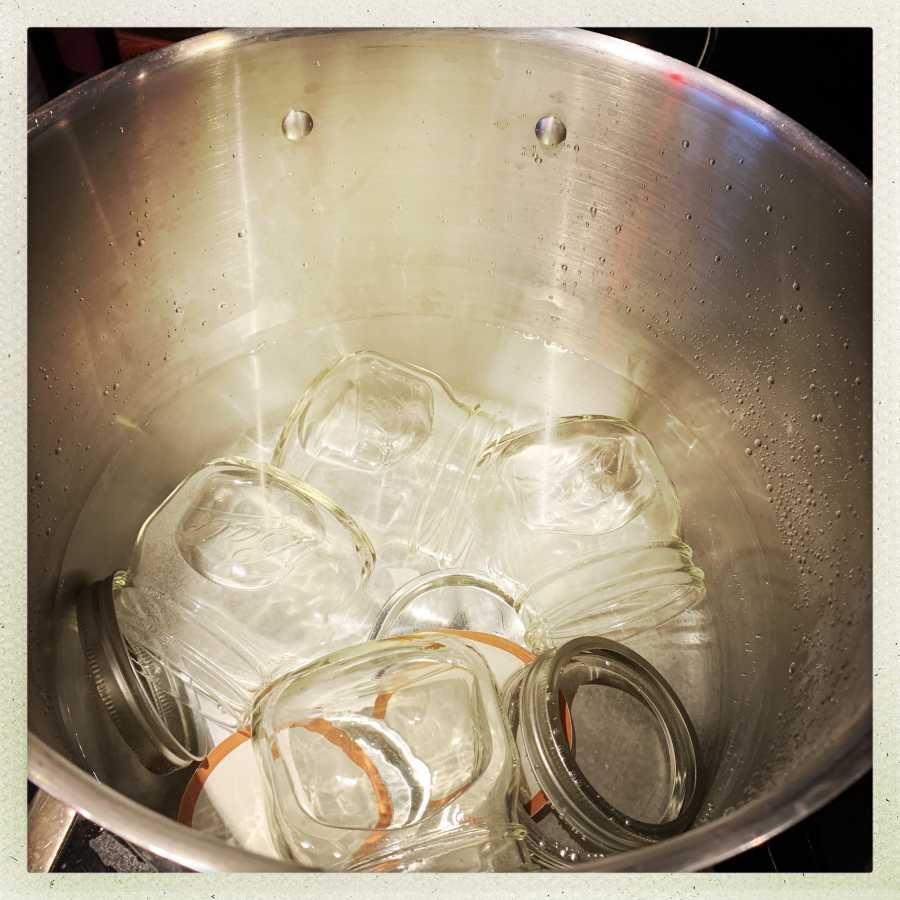 I prefer Weck jars for aesthetic reasons but I’m using Mason jars here because I plan to mail some of these out to people, and I find it unbearably painful to part with Weck jars.

Put the jars in a large pot, cover them with water, and bring it to a gentle boil for 5-10 minutes. That will kill anything except prions (and, if you have prions in your kitchen, don’t worry about it because you’re already fucked)

Start to heat up the peppers in the liquid. You want that to be just at boiling temperature when you put it into the jars – that way the jars won’t break from thermal shock and the environment is hostile to life. The way to time this is to turn the heat on the peppers pot as soon as the jars start to boil. When the peppers start to boil, you’re ready to can! 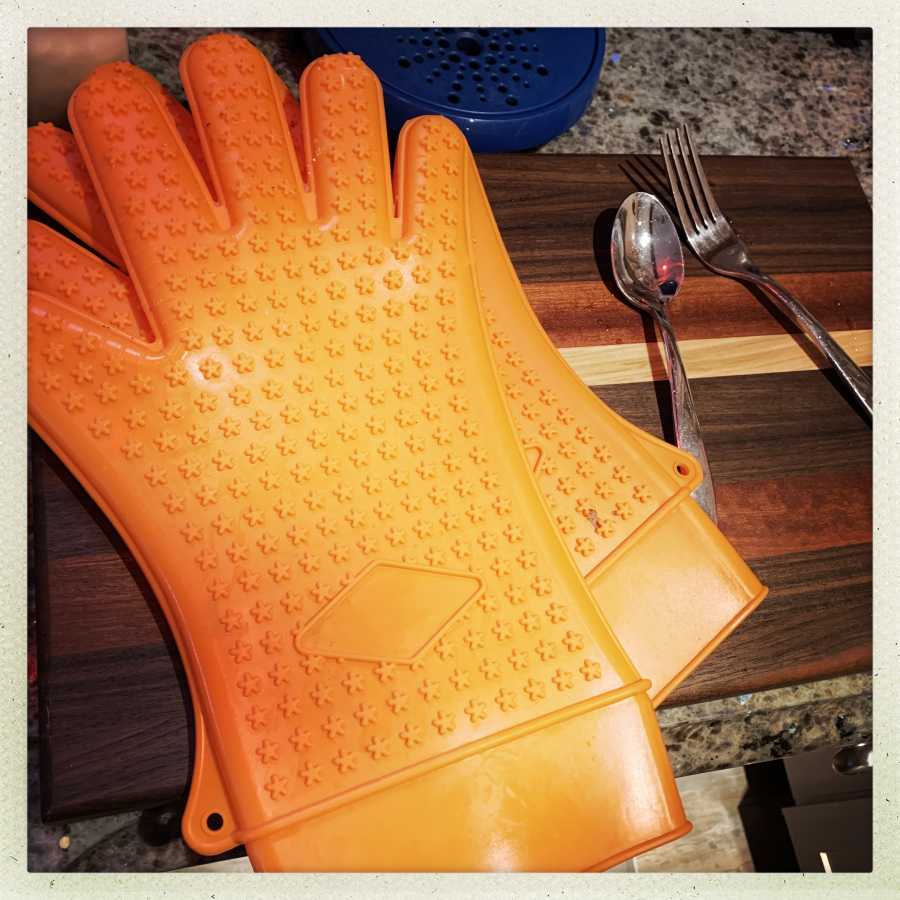 Canning is normally something I am not fond of, but these silicone oven mitts make it almost fun. You can, wearing these, reach straight into boiling water and be OK. Just move efficiently and have the cold water tap running to bring the exterior temperature of the gloves down if the heat penetrates. I reach in, grab a jar, dump the water out, and put it on the cutting board quickly and smoothly, then cool the glove, spoon in the goodies, reach in and grab a lid/ring, and put it on. You can drain the jars into a collander or dump the water out of the pot, but I like going directly from boiling hot to having hot contents and a lid. Suck it, bacteria and fungi! 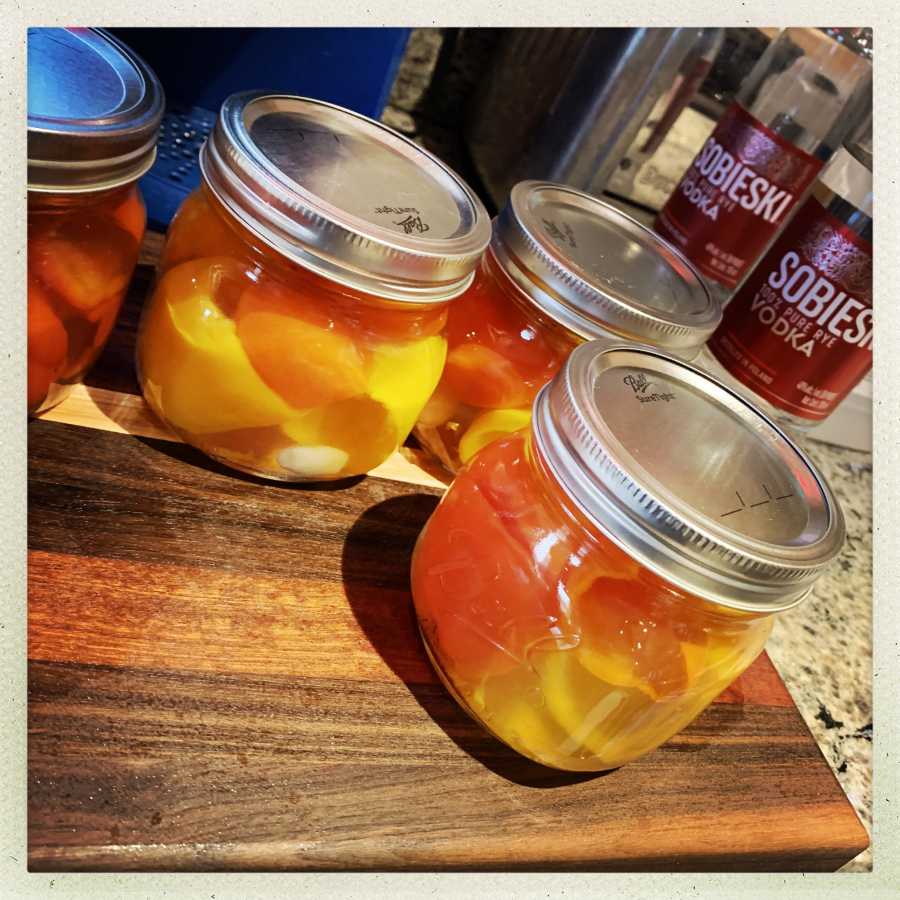 That’s a maple and wenge cutting board Mike P made for me; it’s just the right color to show off the peppers, isn’t it?

You want to fill the jars with peppers and then have the liquid cover them. Get busy with a spoon. Leave some head space at the top of the jar. In the background of the photo you can see two bottles of cheap Sobieski vodka, which I use as a process chemical for a lot of things. I usually add about 1/4 cup of vodka to the jar right before I screw the lids down. It’s extra disinfectant! Besides, it’s vodka and vodka goes in all the foods.

Serve with something that needs sweet/sour. I put them in ham sandwiches. Or serve on a side plate with smoked salmon. You can chop them in half and toss them into pasta with a bit of butter and people will think you worked hard in the kitchen when, in fact, you hardly did any work at all.

I am going to have one spare jar of these from this batch (I’ve already sent out 2…) If one of you really would like to try my pickled peppers and you’re in the US – I don’t want to ship food internationally – let me know and maybe I can drop a box in the post for you.

Canning is NOT dangerous. People very very very seldom die of botulism or whatever. In the case of pickles, the preservatives in that jar are way more powerful than what you’d find in most preserved foods.

The knife in photo 1 is a cheap 1920s Japanese cooking knife that I got at a thrift store in Tokyo. It turns out that it’s rather rare and is of exceptional quality. It’s a wrought iron/mild steel body with a small strip of Hitachi blue paper steel welded into it. During the war, the Japanese had restricted access to metals, so knives like this were made by using tin snips to cut a thin sliver of steel for the welded edge – about 6″ long, 20 ga, 1/2″ deep. The Japanese knife-makers are so practiced at precisely placing the edge that there is no need to use any more steel than that: they put it in exactly the right place and it sharpens up and holds an edge like a motherfucker. My friend Kazumasa M. saw that knife and said, “Ho! Those are legendary!” I said, “No, I just got lucky.”

Isn’t pickled peppers a much better topic than US imperial politics?