It looks to me like the Trump administration thinks it’s going to announce a big peace deal and exit with honor from Afghanistan, just in time for the 2020 election campaign.

That assumes that the Taliban are completely stupid. Since they’re winning the insurgency, they have no reason to negotiate in good faith – and neither does the US. They know that. We know that. Everyone knows that.

The situation in Afghanistan is already terrible. US troops are in isolated walled bases like Fort Zinderneuf from Beau Geste – pretending to be in control of the area, they go out and kill locals then come back and hide. Every so often an insurgent is able to get inside the walls and throw a grenade, which makes the walls get higher and the insides of the forts grow increasingly maze-like. I’m curious about the degree to which the Afghani government wants to negotiate; the situation sounds an awful lot like Vietnam 2.0: the US-supported puppets know that they are going to be slaughtered if the US leaves, so they’ve got their bags of looted cash packed and are ready to decamp to Biarritz as soon as the US troops start getting on planes; they don’t want to be part of one of those “hanging from the skid of a Huey as it lifts off from the consultate” scenario.

So Trump (USA: “we don’t negotiate with terrorists”) administration has been having open secret meetings in Qatar, trying to figure the situation out. The Afghani negotiating point is to keep a few US troops behind in order to protect them. The Taliban negotiating point is, “no, by ‘leave’ we mean we want you to leave.” There continue to be attacks, and one was successful at killing an American so Trump had an excuse to throw a tantrum and cancel some of the meetings. That’s “negotiation” Trump-style; the State Department is learning the boss’ bad habits. 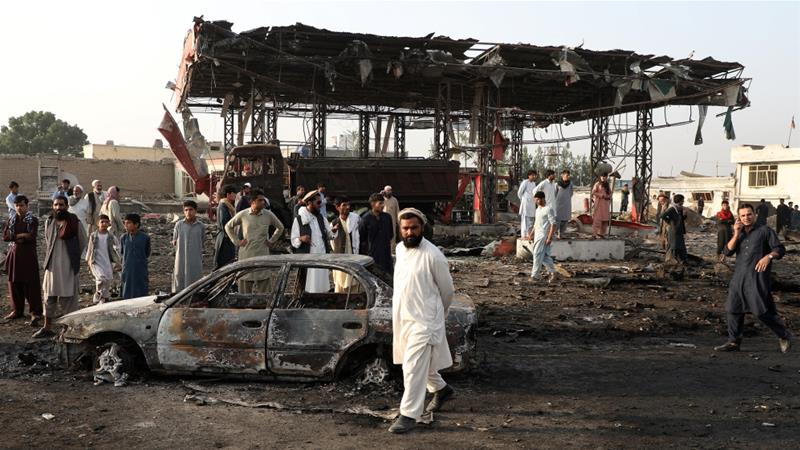 The main target in Kabul is the “green village” – the walled Fort Zinderneuf part of the city, which is basically the “Green Zone” in Iraq 2.0. It’s Saigon. It’s where the Americans walk around freely and everyone who’s not obviously American gets disarmed before they are allowed in. The name of the game is to sneak explosives into that area and blow someone up – because pretty much everyone in there is a target. [aj]

Taliban spokesperson Zabihullah Mujahid said a coordinated attack with a suicide bomber and gunmen was under way.

The attack took place while Afghanistan’s main TV station Tolo News aired an interview with the US envoy Zalmay Khalilzad, who was discussing a potential deal with the Taliban that would see the US withdraw forces from five bases across Afghanistan.

This is all a side-show. What’s really going on is that the Taliban are taking over important parts of the country outside of the forts. The US Marines are holding a camp in the middle of noplace useful from which they can occasionally go out and do search-and-destroy but the rest of the country is looking more and more like Vietnam after the attack on Saigon. Because the Taliban can’t do much about the forts, they’re taking cities like Kunduz, which (depending on who you believe) is either fallen to the Taliban or falling to the Taliban. Meanwhile, the US has allowed the CIA to build its own army (“what could possibly go wrong?”) presumably consisting of the nastiest torturing psychopaths that they could find. [intercept] Remember the Contras in Nicaragua? That’s going to be the US’ continuing gift to make sure Afghanistan remains a failed state. They’re up to the usual CIA tricks: torture, terror, and insurgency. [nyt] Remember those tricks? Those are the same tricks that created the Taliban in the first place – as anti-Soviet mujahideen. (Arguably they also created Al Quaeda)

Right now the biggest stumbling-block to a US exit with peace terms is the CIA-backed counter-insurgents. Naturally, the Taliban would like the US to stop financing the CIA’s private army, and I think it’s pretty reasonable that they feel there will be no peace if the US leaves its death squads in place. Given the US’ horrible history of covertly backing guerilla squads how are they going to convince the Taliban that they have stopped? The obvious way would be for the US to stop backing them and let them all be killed. Just remember this when the US talks about “nation-building”: first they build an army, then they build police, then they build death squads, then maybe they think about repairing the roads.

NADER SHAH KOT, Afghanistan – Razo Khan woke up suddenly to the sight of assault rifles pointed at his face, and demands that he get out of bed and onto the floor.

Within minutes, the armed raiders had separated the men from the women and children. Then the shooting started.

As Mr. Khan was driven away for questioning, he watched his home go up in flames. Within were the bodies of two of his brothers and of his sister-in-law Khanzari, who was shot three times in the head. Villagers who rushed to the home found the burned body of her 3-year-old daughter, Marina, in a corner of a torched bedroom.

The men who raided the family’s home that March night, in the district of Nader Shah Kot, were members of an Afghan strike force trained and overseen by the Central Intelligence Agency in a parallel mission to the United States military’s, but with looser rules of engagement.

This is what the US is up to, while complaining that the Taliban are not negotiating in good faith because they managed to sneak a bomb inside the walls of the US fortress. The US is continually launching “search and destroy” missions and drone strikes, while it’s trying to negotiate for peace. Every day the US is killing people in Afghanistan, mostly civilians. 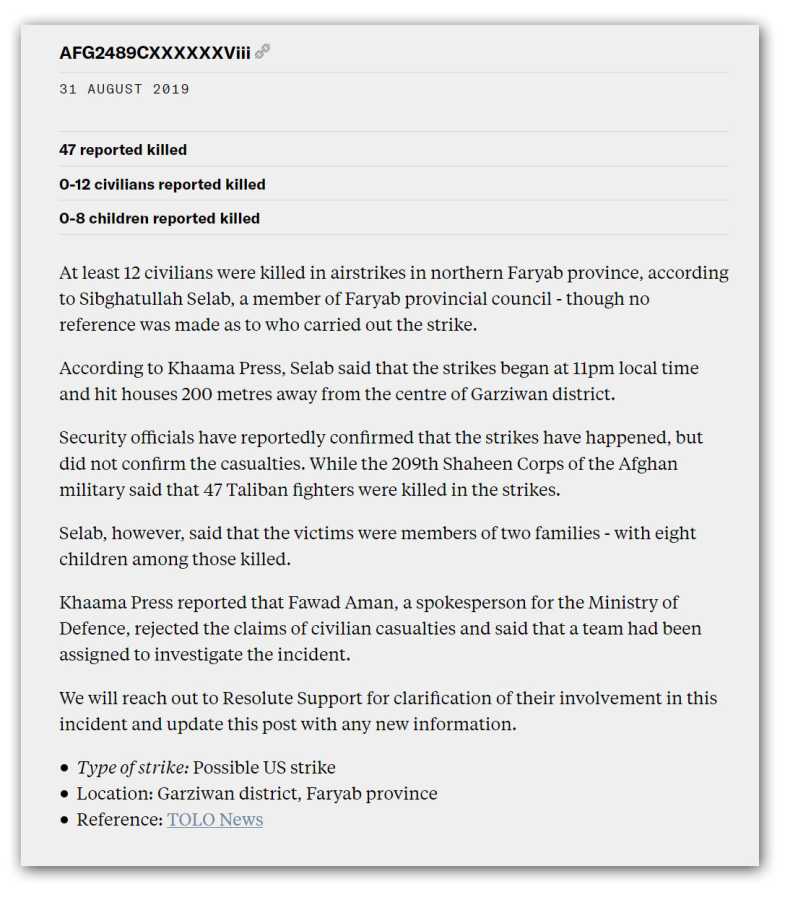 Usually somewhere around here, back in the Vietnam days, some American press bumwad would say something about how “they don’t value life like we do.” After all, the Taliban are not walking out on negotiations in spite of the steady drum-beat of killings carried out by the US.

The Taliban aren’t stupid; they know how the Vietnamese got the US to leave: the Tet Offensive, which resulted in shocking casualties for the US, but worse, it demonstrated that Saigon was not a safe fortress. The Taliban are doubtless tired of the war of attrition and just want the US to leave, so they’re not going to try anything dramatic unless the US doesn’t leave.

Remember how we finally woke up to the fact that Henry Kissinger is a monster? That Kissinger delayed negotiations with the North Vietnamese for US domestic political reasons, and thousands of people died in bombings that he and Nixon ordered in order to soften the Vietnamese up for when the US was finally going to condescend to negotiate with them? We’re supposed to forget that and be impressed at Trump’s ‘diplomacy.’ If you want to see what that looks like, you can read up on the “Christmas Bombings” in which [history]

On December 13, peace talks between the United States and North Vietnam collapsed. The North Vietnamese and American negotiators traded charges and countercharges as to who was to blame. Infuriated, President Nixon ordered plans drawn up for retaliatory bombings of North Vietnam. Linebacker II was the result. Beginning on December 18, American B-52s and fighter-bombers dropped over 20,000 tons of bombs on the cities of Hanoi and Haiphong. The United States lost 15 of its giant B-52s and 11 other aircraft during the attacks. North Vietnam claimed that over 1,600 civilians were killed.

Of course the Taliban would have been happy to come meet Trump at Camp David. Because that’s the alternative: more killing. They can wait; they own the place.

Observe the shameful spectacle of Trump puffing out his manly plumage and strutting about because the insurgents had the temerity to kill an American soldier (a member of an occupying force and a lefitimate military target) while he was trying to negotiate with them. I bet this whole thing will come to a coordinated conclusion in time for the US election, but only after the CIA and exiting US troops spike a massive amount of violence in Afghanistan, to show them who’s the baddest. 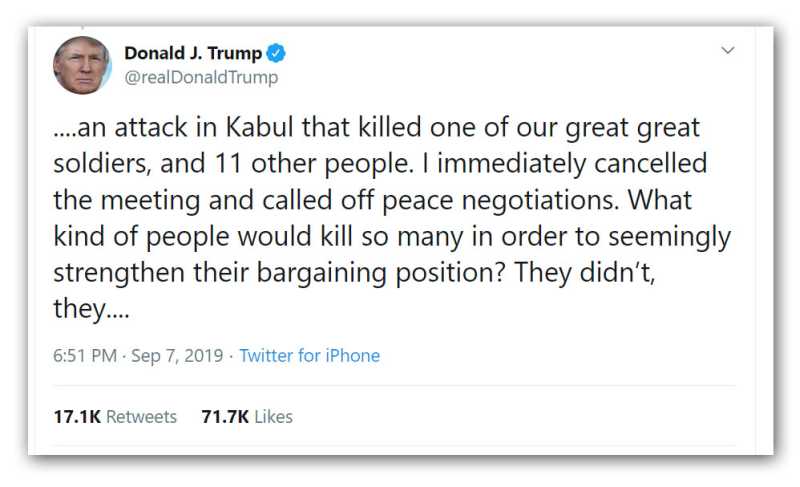 Richard Nixon and Henry Kissinger would. And, remember when Trump was first elected and they ceremonially dropped a great big bomb on Afghanistan? Wasn’t that an attempt to strengthen the US’ bargaining position? [politico]

Respect For The “Rule of Law” » « Tactical Flip Flop