Once the disaster was underway there wasn’t anything that could stop the consequences. Unfortunately, I’ve seen buildings with lead paint burn, and that weird glabrous smoke was immediately recognizable.

There was a whole lot of it. 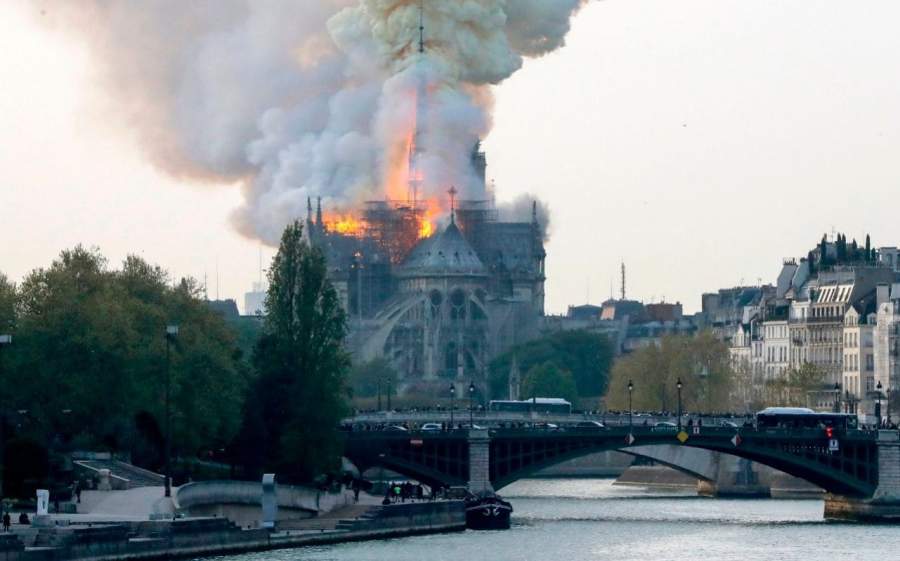 I didn’t see anyone making announcements about “don’t breathe the smoke!” but maybe that’s because it was going pretty much straight up, and the particulate fallout would have been invisible; the air might have tasted a bit sweet and slightly metallic. I remember the flavor of lead from back when I painted miniature figures in the 1970s, until Tom Gervasi was paralyzed from all the lead he ingested licking the paintbrush to straighten the hairs.

Three months after the devastating fire at Notre-Dame Cathedral in Paris, reports of a new, previously unheeded threat to local residents have emerged: lead poisoning. According to confidential documents leaked to the (paywalled) website Mediapart earlier this month and discussed across French media, locations surrounding the fire-damaged cathedral have registered levels of lead contamination ranging between 500 and 800 times the official safe level. The building’s roof and spire were clad in several hundred tons of the metal, which can be toxic if particles are inhaled or consumed, especially to children. The blaze that consumed the cathedral’s roof liquified oceans of lead and lofted a plume of lead particles across the city.

500 and 800 times the official safe level is mighty unsafe. Not that I would, ever, but I wouldn’t eat any fish pulled from the Seine River for the next couple hundred years.

In a way, the response seems familiar to those who know anything about Chernobyl:

On May 13 – almost a month after the fire the city of Paris first tested lead levels at schools and kindergartens near the cathedral, apparently informing principals in the affected area that there was no significant health risk. Advice made public to residents on and near the Île de la Cité by the Ile-de-France Regional Health Agency meanwhile, went no further than advising everyone to clean away dust with a wet cloth, and seek medical advice “if necessary.”

Toxic lead paint is defined by the US CDC as paint containing 1mg/square meter of lead. So, if you have a building (or a lovely chunk of vintage wrought iron!) painted with the stuff, you should grind it off with a vacuum collector and dispose of the dust bag.

At nearby Place Saint Michel, for example, they have reached as high as 28,400 micrograms per square meter – almost six times the usual level.

I guess it’s not as bad as it could be, but there will be rattle-on effects and costs.

One of the things I remember about my childhood Paris is all the bottled water. Mostly, I figured it was just another way of padding the check at a cafe, but now maybe it’s a good idea.