When I saw news of the recent spate of deaths on Mt Everest, I read up on them, and the pages about the traffic jams on Everest were really sobering.

It’s become a big business to help people summit Everest, so they can brag about it at cocktail parties, or whatever. 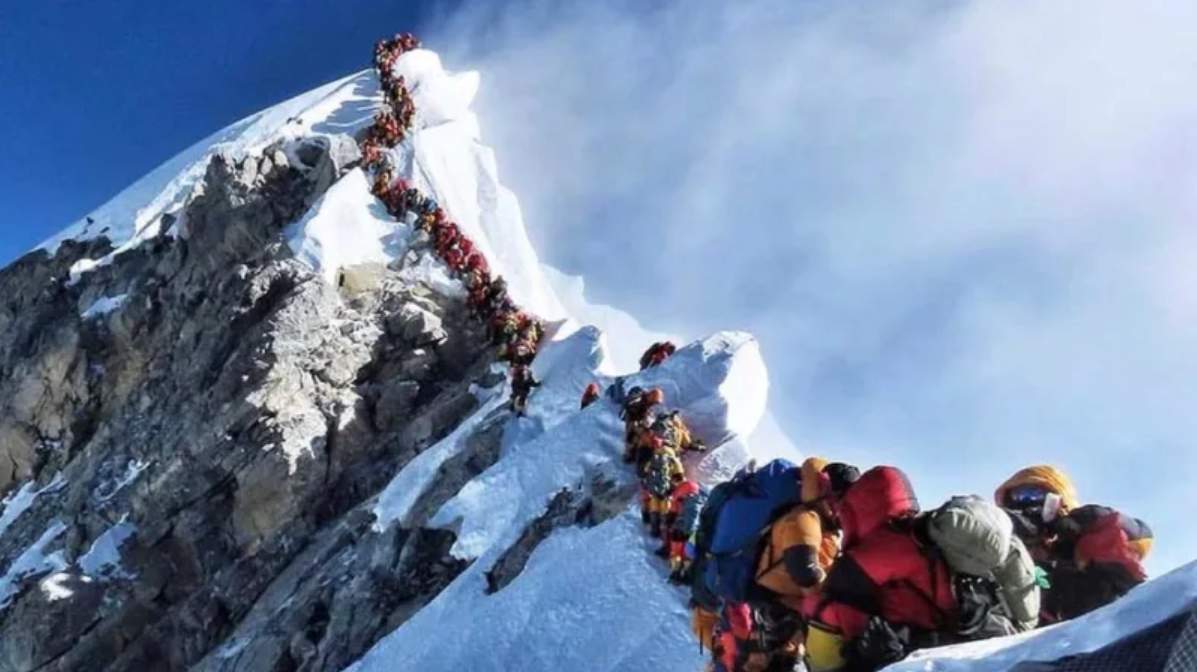 I read Jon Krakauer’s Into Thin Air [wc] when it came out, and was duly amazed. Since it was written in 1997, Everest has been turning into a real tourist trap. That line of people on the spine of the world have a long fall to certain death on either side of them, and they’re dizzy, anoxic, and exhausted. It doesn’t take a lot of bad weather to make that exposed ridge a death-trap.

But, as they say in The Twilight Zone “Do you want to see something really scary?”

Tying 3 ladders together with poly rope does not cut it. Obviously, the sherpa guide knows what he’s doing but I’d just turn right around when they pulled out the poly rope. Nope, nope, nope, nopeitty ope!

There’s a 3D virtual reality game for the HTC Vive headset, which is a “climb Mt Everest” experience. Even though the resolution on the 3D headset has a bit of pixellation, it was a truly amazing thing to be able to stand in a comfortable living room with a shag carpet floor, and be terrified. (spoiler: the ladder is in the game but it’s not tied together with poly rope). When Anna put the goggles on, she looked around and immediately flattened on her tummy on the floor for safety. The illusion is that good. When I grabbed her by the back of her pants and hauled her forward toward the edge, she punched me with a diamond-hard fist.

I do not understand the concept of “adrenaline junky” and I don’t think it’s a real thing. But there are people who seem to enjoy sports/events where they are risking their lives against failure. I suppose it must focus one’s concentration admirably. My friend Michael “pelican” H. was one of the early innovators in hang gliding, and he says that, of the group he started with, he’s the only survivor. That’s a bit sobering. I’d be happy to play Extreme Hang Gliding Dodge Pterodactyls Adventure with a 3D VR headset on but it doesn’t seem worth it to risk making a dirt angel from an altitude. On the other hand, it’s probably a fairly quick death, once you’ve done the lengthy falling part. The deaths described on Mt Everest do not sound quick or pleasant.