Where we left things, my blade was clayed up and standing in the corner drying.

Michael and Gabriel Bell said we should make another try this morning, early, so we all went our separate ways and came back around 8:30AM. We all had our game faces on. Gabriel started off with Mike’s blade and nailed it. There were a few hard spots on the spine but they were not a problem and the blade took its tweaking/straightening without any problem. One down. 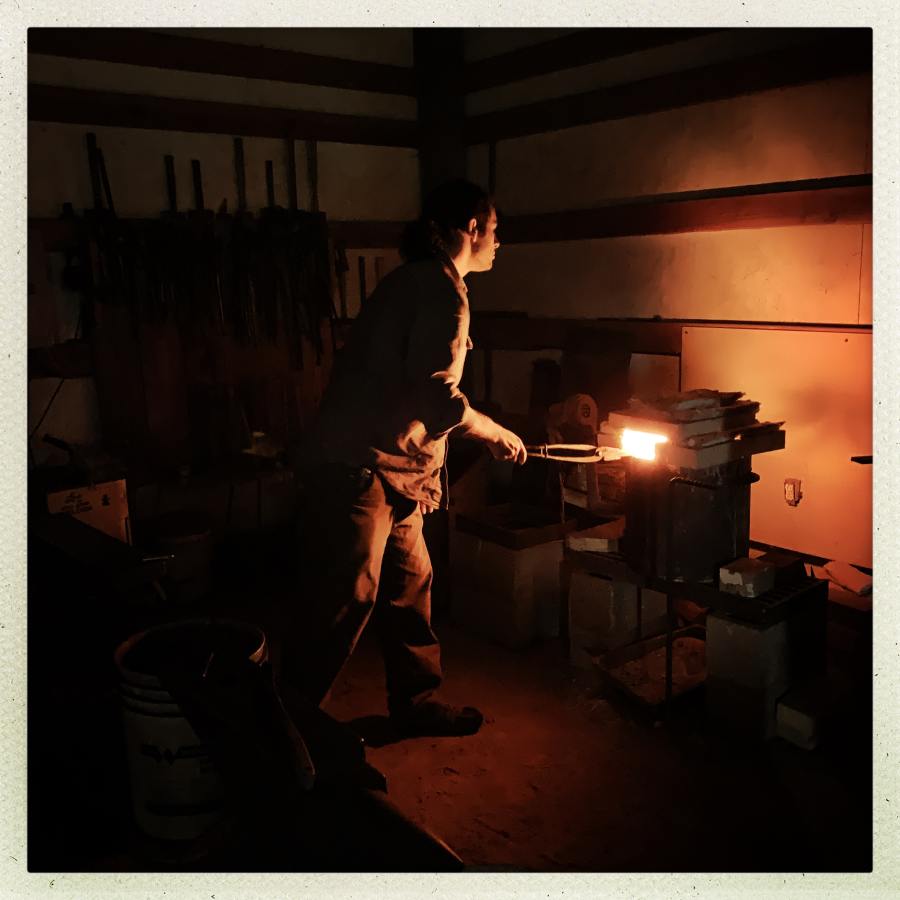 I asked Michael Bell if he could do mine, since we didn’t have enough time to screw around and having a master swordmaker do it significantly increased the chance of things turning out correctly. And, they did. 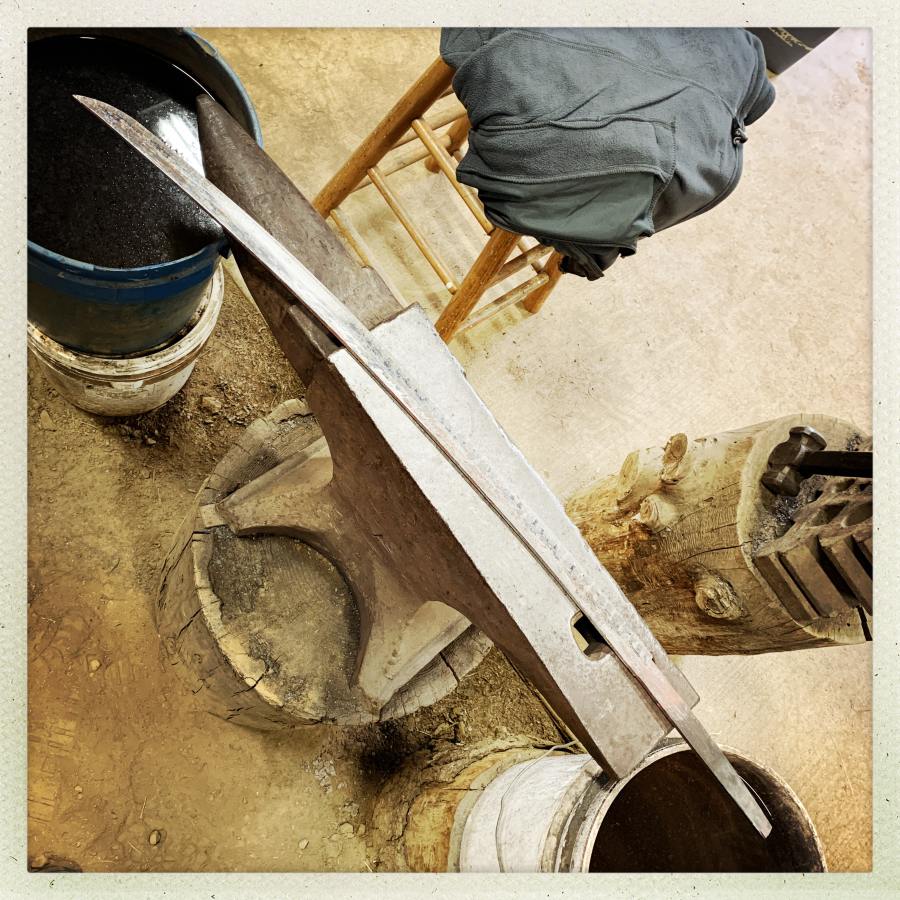 The curvature is just what I wanted, the edge is completely hard, the back is completely soft, the sides are soft, and the temper line is fantastic. We did a small grind on one of the flats to get an idea what it looks like, and it’s got some floating cloud-bits and a great deal of action.

It’s going to take a long time for me to complete this; I don’t have the opportunity to do my finish grinding with master swordsmiths hanging around, it’s going to be a solo effort. I think it’s going to live on a rack in the shop and I’ll take it down and work on it a bit at a time on days when I feel that my eye and hands are particularly dialed in.

The temper-lines in the wire rope blades are particularly dramatic; they often follow the former wires and have a sharp wavy look that is quite unique. Unfortunately, it’s hard to photograph a hamon well, but this is an example of a wire rope hamon on a blade Michael Bell made: [dragon] 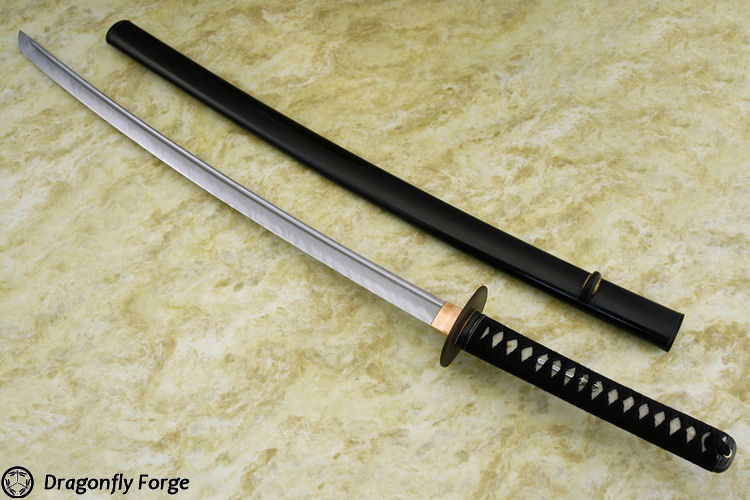 It is many hours between that state and this: 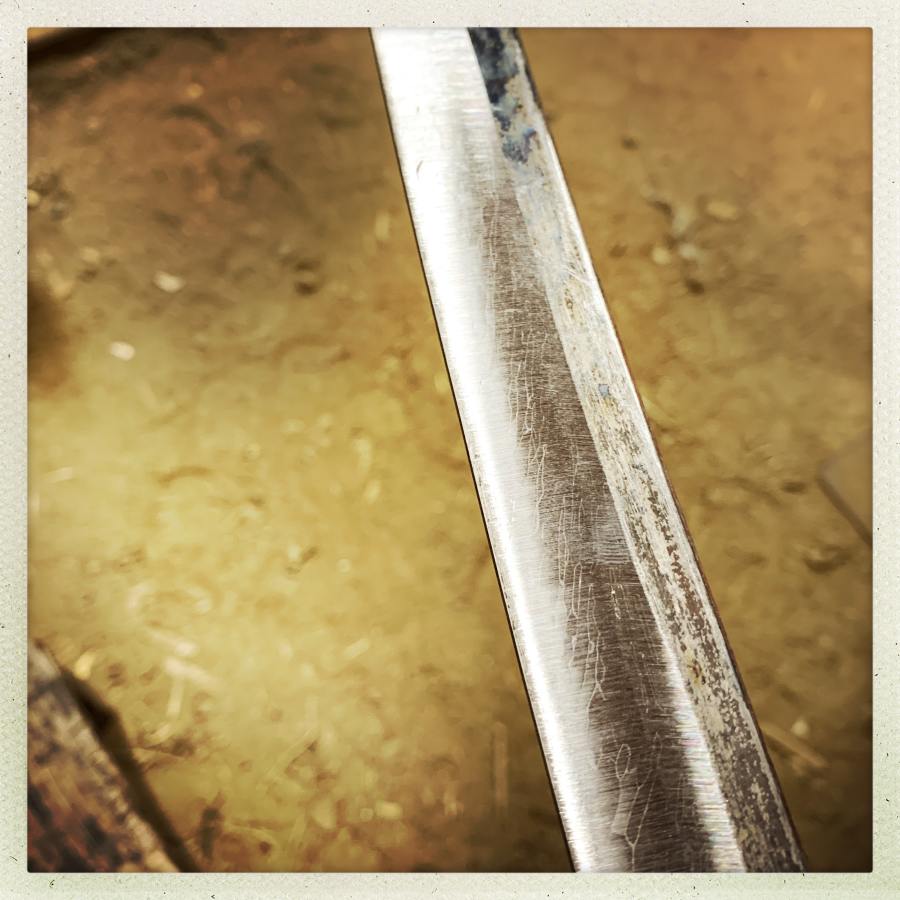 Then it was time for goodbyes and hugs for Samson, packing the blade in the shipping tube I made for it, and starting the 4 hour trek north to Portland.

Tomorrow I’ll be travelling most of the day and then driving from Washington airport back to my place. With a bit of luck I’ll be home wednesday morning. I may be quiet for a few days because I’m tired, my hands ache, and my brain is worn out.