Spoiler zone below. I strongly suggest you don’t read this post if you think you might see the movie.

I enjoyed it and found it creepy and scary. If you like intelligent horror movies, this is one.

I loved the movie. Usually, when I walk out of a movie nowadays, my mind is a swirl of continuity errors and plot problems, and general mockery for “people in spandex punching eachother” crap. 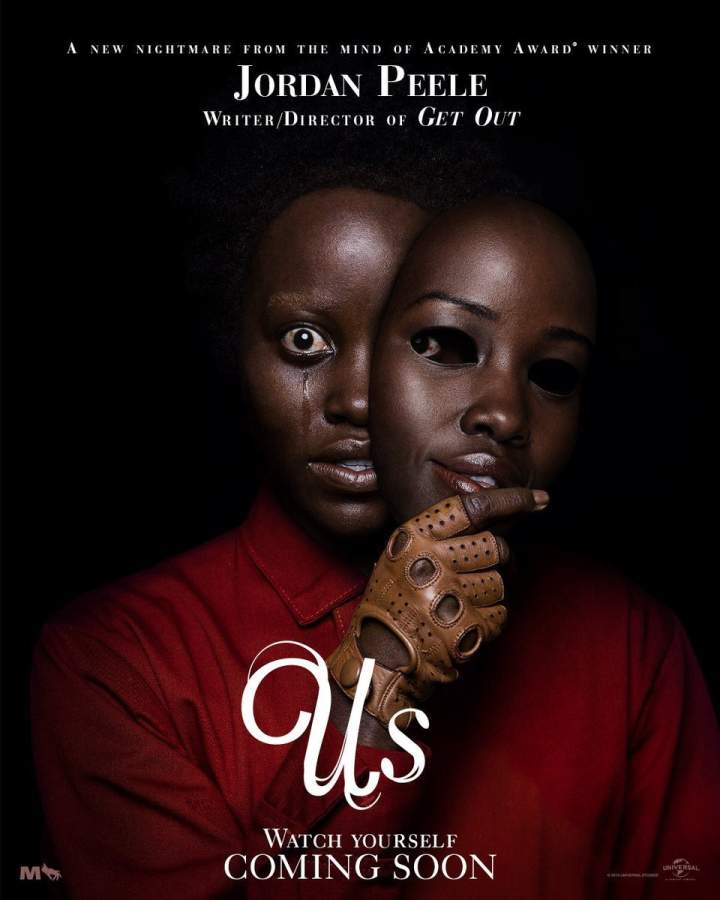 The marquee ad, even, is excellent. If you go into this movie cold (as I did) it’s interesting but it gives nothing away. Visually striking and that’s about it.

First and foremost, having the actors act against themselves was a brilliant trick. I bet that was tremendous fun for them; Shahadi Wright Joseph, as the daughter, was incredible – I hope that young woman has a long and well-deserved career as an actress. Lupitia Nyong’o was fantastic, too, but as the headliner who’s carrying most of the movie, you kind of expect that. Saying that she nailed it, perfectly, over and over, is an understatement.

My favorite thing about this movie was that it kept my mind engaged and consequently did not have to rely on gross-out gore or jump-scares. In that sense I would put this movie as scarier and more clever than Alien which, for me, is about as high as the bar goes. Alien ratchets the tension up slowly over the course of the movie, and so does Us.

Moments of bizarre humor keep the movie from bogging down, and serve like little nuggets of normalcy to help ground what is a profoundly abnormal concept. That’s also very well-played. The humor is really off-beat – it’s things like how Shahadi Joseph, as the daughter, sort of shrugs her shoulders a bit before she goes to work with the nine-iron to make certain one of the ‘others’ is thoroughly dead. There were moments of bizarre that reminded me of a Bruce Campbell movie, too – especially the motorboat engine and its remarkably good timing. That the motorboat seemed to have a life of its own is the closest thing to a cheesy plot macguffin in the movie; that’s something impressive as well.

If there’s a weakness, it’s the whole idea of an underground zone full of connected  others. I was wondering how the writers were going to explain what the heck was going on, and it worked although I’d say that’s the biggest weakness in the movie. It’s still better than the many alternatives (supernatural evil, it was all a dream, etc) and it fit well into the ending of the movie.

The ending was great. It wasn’t a cheesy The Sixth Sense-style reveal, it left me sitting there with my jaw hanging as I figured it out.

For me, making a movie scary is a really hard thing. It has to (assume “my opinion” on all of this) engage the brain with a plausible yet scary scenario, and then plausibly work within that scenario to make us pee ourselves. That’s why I would say Alien and The Thing are some really scary movies: they drop us into a very consistent place that’s scary and the scariness emerges from the plot’s internal logic. That, by the way, is why I am so fond of Bruce Campbell gore-fests: they may be deep-fried cheese but they have a consistent inner logic that allows us to suspend disbelief and see a lawnmower as a melee weapon.

The 9-iron is iconic and the way Shahadi Joseph carried it – at first awkwardly but later like a battle talisman of an experienced warrior – it was just perfect.

I’m so happy to see Hollywood come out with a movie that’s not just another remake, or a superhero movie – this one is worth seeing. When I’m comparing a movie to Alien and The Thing that’s about as high as I go on the praise-meter.

The red jumpsuits are a perfect halloween outfit. I predict there will be a lot of people showing up to parties as their alternate selves.

Anna caught this, which I missed: The reason ‘mirror world Adelaide’ speaks with a hoarse voice is because her larynx was crushed in the entry scene in the house of mirrors. Perfect! Clever! I totally missed that, and it’s a much better confirming detail than Blade Runner‘s unicorn. It’s really subtle but it’s perfectly clear.

Another thing Anna caught: she thinks that every time in “the real world” that Jason (the son) played with his non-functioning lighter, he must have been setting Pluto, down in alternate-land, on fire. The lighter didn’t work in the real world, but worked down there. That’s a scary idea!

I realized, as I wrote this, that gimmicky reveals and jump-scares insult my intelligence and that’s why I don’t like them. For me a scary movie has to connect me to some internally consistent scenario that builds an existential dread. I completely failed to give a shit about The Sixth Sense, for example, because I figured out right away what was going on because you don’t get shot like that with a .357 magnum and survive – therefore the hero was dead and the skeletal “plot” of the movie was obvious.