Operation Overreach is something I have not posted about before. I think some part of my subconscious was telling me “this is going to be more bigger than you think” and I was hesitating to get into it.

Around November I had a realization that, “I am running a 2300-degree forge in a room with a wooden roof.” There’s a problem with that whole idea: it’s unnecessarily bad. I’m very careful and all that, but “careful” should not be the only thing between you and disaster, because humans don’t do “careful” well. Although, I must say, from a risk management standpoint, my own well-being is more important, so I worry about that more. That actually means that I am accepting that something might go wrong with me and I might let the building burn down as a side-effect of worrying about myself first.

It occurred to me that I used to have a barn on my property, and I still have the pad for it, and the power drop and water are still there. What if I built a metal shed and turned that into the hot metal part of my process? Then I could set up a bigger forge and a bigger press (with 220volt service!) and build a bench for investment casting hot metal – move all the stuff that burns or heats or explodes to a place where it can do that without taking out everything around it. So I snuffled around online looking for those “shipped flat” IKEA-style sheds. That was my mental picture: steel shed by IKEA. No doubt, some of you are already laughing.

One of the sites I looked at had a 3d design tool that let you explore the shed options. That was when I had the idea of making the shed look sort of like an old Japanese building: hipped roof, long overhangs, expansion areas, and – since the building is going to be on a pad looking over my fields into the woods – why not build a semi-covered porch with sliding shoji doors and a raised wooden floor in part of the building where I can store swords, a coffee machine, and have a little bit of dojo floor for cutting practice? See what I mean? This is the Marcus zone – when I am not working on a project for a client, I let all the whimsy run to my head and crash about blindly, stoned on whimsy, committing to plans that I just should not commit to. 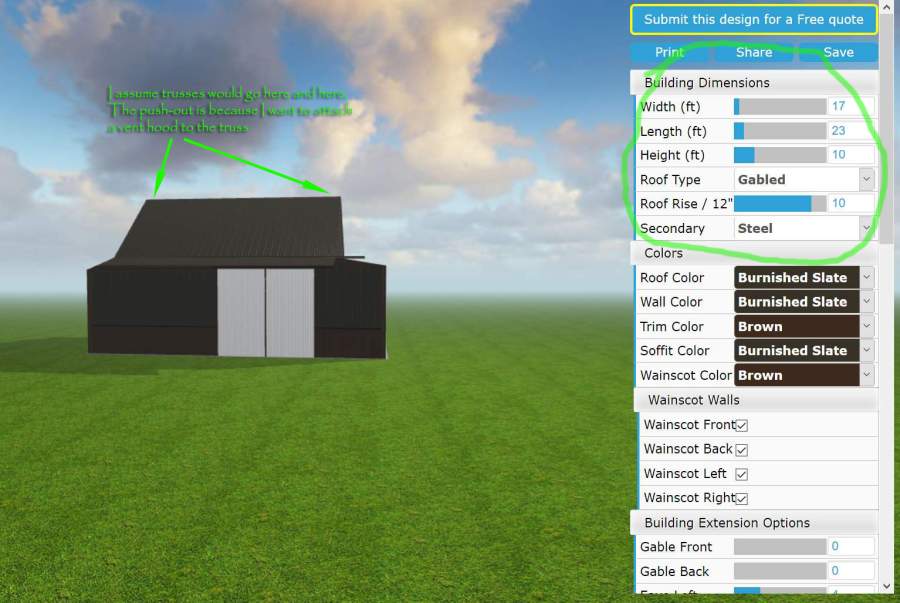 As I started talking to some of the companies that produce these things, I discovered that they really only know how to make simple square buildings with a standard pitch of roof. They don’t actually know how to make buildings: they know how to turn the crank of a very simple process. In retrospect, that’s OK – I’d have wound up with something ridiculously over-budget.

A simple steel shed is not very expensive. By the time I added stuff, enlarged it slightly for the porchy area, and added a big sliding door (facing into the prevailing winds so I can adjust the air turnover rate in the building by opening it slightly like a gigantic flue) – I had a desin that was more than I expected but not unbelievably so. “Some assembly required”

The upshot is that the building won’t look much like that. In fact I am not sure what it will look like. I suspect I’ll just be glad if it looks like anything at all. So I got in the build queue by writing a check, and over time I fielded calls from the building people:
BP: “About that slate-colored wainscot. We don’t have that color any more. Are you OK with all brown?”
Me: “Do I really have a choice?”
BP: “No, we were just being polite.”

The roof angle “Oh we can’t do that” changed. “Well, why do you offer it then?” It’s OK as long as it keeps the water out, etc. By a certain point I was into the optimism zone – let’s keep this whole thing from being a disaster, and call it “success!” After all, it’s going to make a hell of a nice metal shop no matter what color the wainscotting is. Stay focused on what matters.

As the time for the delivery was scheduled I learned that I was going to need “a forklift or something” to unload the building parts.  That set me back a bit: the pad for the building is a half mile from the road, over a horrible mud driveway, and a forklift would sink right into the ground and vanish. I called a few folks in the area and they all suggested I talk to this one guy “who does that stuff” and so I did. He’s not very talkative, it turns out – I told him what I had in mind and he said “call me that morning and I’ll bring a crane truck.” We spent a while looking over the blueprints together and he explained to me that unless I was really good at laying out measurements, I might have trouble – there’s not a lot of flex in a steel frame building, so the foundation posts need to be accurate. Oh, and foundation posts are a problem since I’m going to need to get a backhoe out there… etc. The project began to magnify and balloon right before my horrified gaze.

I was still operating in idiot mode, though: I had some idea that I was going to make a travois and hook it to my truck and lift beams upright that way. Or that I was going to put 20-foot pieces of sheet metal roofing under my arm, carry them up a ladder, and screw them into place. Nonsense. 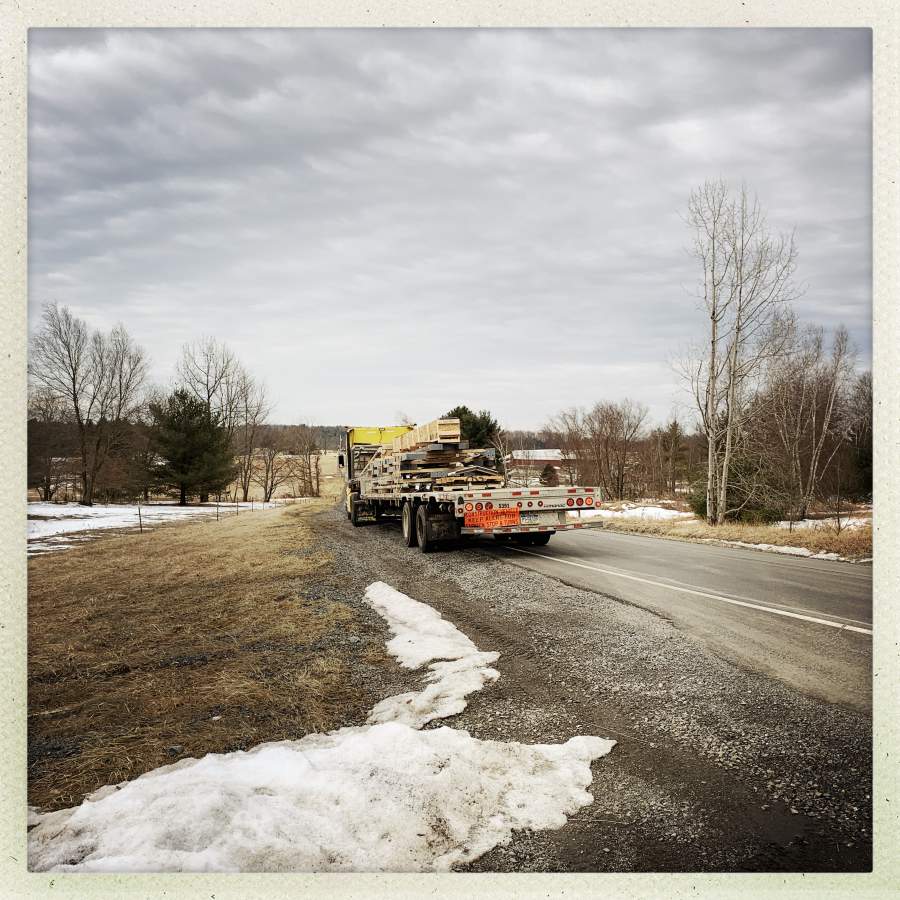 Fortunately, my paladin showed up with the right gear. I was expecting one of those service-body trucks with a small boom arm (like they use to lift cars out of ditches) but Ken’s done this stuff before and has the right things: 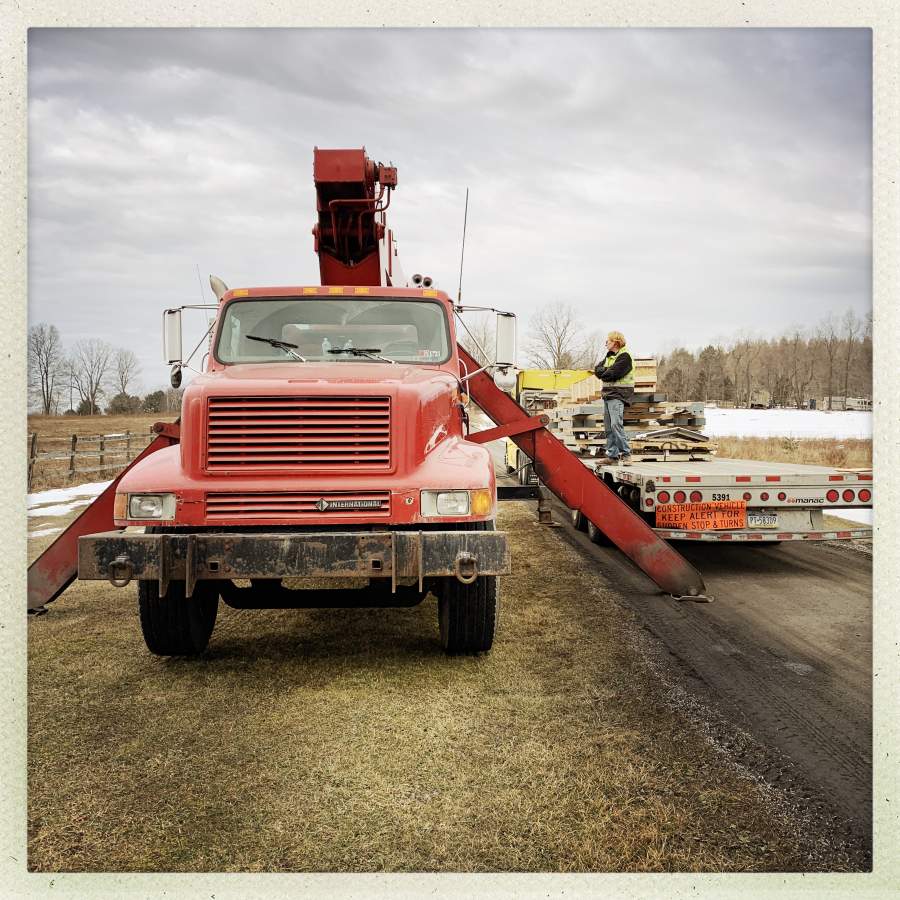 The trucker with the semi was great – he backed the semi down my driveway halfway, to a flat spot that’s not bog. I know that when you spend as much time driving a semi as they do, backing a quarter mile down a driveway that’s unimproved dirt is not a great problem, but I was still impressed.

My assignment in all of this was tow strap and pallet guy. I ran back and forth and unhooked the straps and laid out the pieces of wood so that when the crane swung them over, I could guide them into place and find them a nice home. The pieces of wood, by the way, are beautiful 4×6″ oak – exactly what I need for the beams in the raised floor section. Win.

Unloading was about a 2 hour process – not a great deal of effort thanks to the crane, but we were all on our toes the whole time. A beam shifting in the strap and sliding could have squished any of us in a fraction of a second, and I was always nervous running in and grabbing the low end of the beam to guide it into position. Spoiler: we were all fine.

Ken and I had a brief talk afterward.
Ken: “Now you know what I was looking at you funny when you were talking about assembling this yourself.”
Me: “I am so stupid.”
Ken: “We do these all the time. You just need the right tools.” 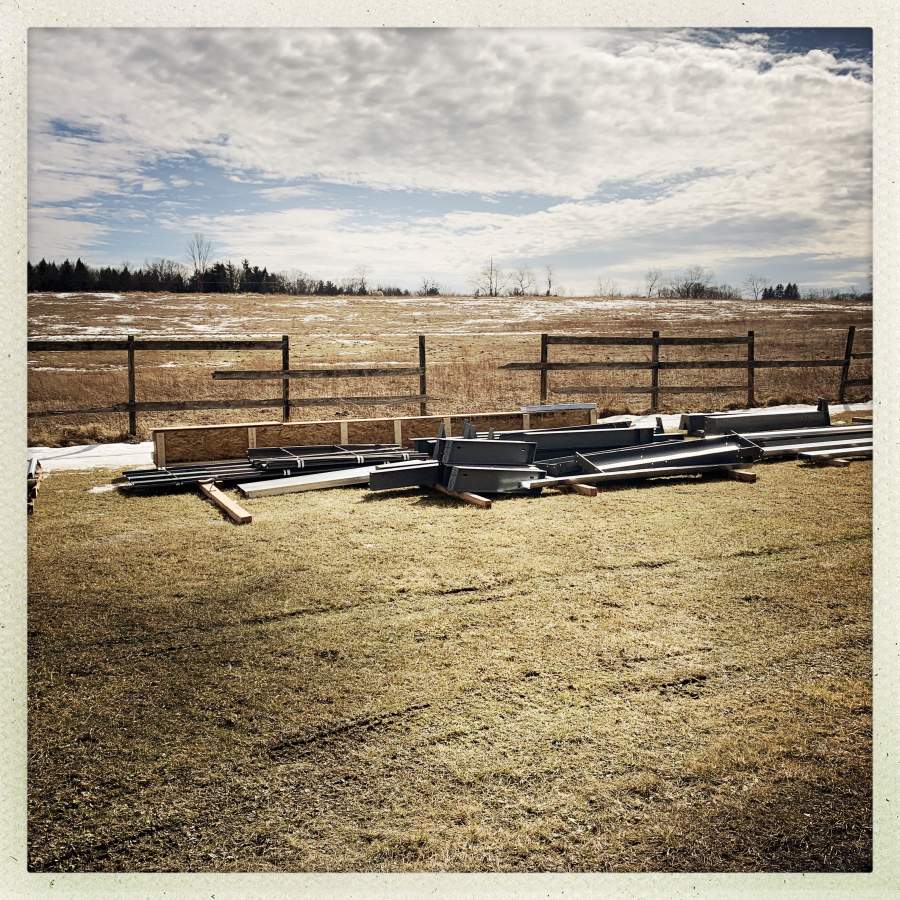 Next step is to pour posts and probably a slab. It turns out it’s easier to pour a slab than it is to make a form for a building with a dirt floor. I’m OK with a slab; my dreams of something easy I could do myself have not survived the light of day. The bigger beams weigh 400lb, easy, and once they’re bolted together the uprights will weigh about 1500lb. The good news is I will have a hell of a solid shed.

I’ve been getting along fine without a power hammer but having a slab in the shed means that I need to decide whether I absolutely never will get a power hammer, or if I need to assemble a reinforced floating rebar-island in the floor form, so that I can put a hammer in if I change my mind.

This is turning out to be a bit more than a simple, “something nice to do when I retire” project.

Sunday Sermon: “You Have Friends in High Places” » « From the Left Side of the Barn