The loathsome John Bolton is too easy to point at as an example of everything that is wrong with US Middle Eastern foreign policy.

Unfortunately, Bolton’s merely one of the more outspoken ultra-nationalist imperialists in the White House’ inner circle. We should assume that they all are, and always have been, if we are to judge at all from US actions not words. The US has been expanding its global empire (“sphere of influence”) gradually and ruthlessly. It’s hard to point and say where the lies are worst and thickest (because they’re ubiquitous) but surely the US’ pose of “fair broker” in the Middle East has to be wearing thin. The world community needs to start saying “you know, this ‘bombing people for peace’ act has run its course.” I suspect nobody does that because they’re all afraid that Plan B is the US hoisting the eagle of empire, and just flipping off the cloak of pretend restraint.

They are clearly spoiling for an excuse to demolish Iran into the same kind of failed state status as Syria and Iraq. They’re so desperate that they’re pulling at the most ridiculous straws: [wsj]

The request, which hasn’t been previously reported, came after militants fired three mortars into Baghdad’s sprawling diplomatic quarter, home to the U.S. Embassy, on a warm night in early September. The shells – launched by a group aligned with Iran – landed in an open lot and harmed no one.

But they triggered unusual alarm in Washington, where Mr. Trump’s national security team led by John Bolton conducted a series of meetings to discuss a forceful U.S. response, including what many saw as the unusual request for options to strike Iran.

The shells landed in an open lot? If they had hit a Médecins Sans Frontières hospital, I’m sure the US would have cheerfully wallowed in nihilistic hypocrisy by claiming it as a cause for war. It would have been a heinous crime, had someone other then the US done something like that. The US does it all the time, but it forgives itself afterward.

Remember how the US is so concerned with ‘sovereignty?’ – a nation’s right to do All The National Things? Iran’s sovereignty is entirely delimited by whether or not Iran’s actions freak out Israel. Israel, which is an undeclared nuclear state that has developed a variety of delivery systems (and even bought submarines from Germany) – nobody bats an eyelash over what they’re up to – but the US War Party begins banging the drums immediately if Iran does anything remotely threatening.

To be fair: satellite launches mean you can also do ballistic targets [cnn] Cue Israel freak-out. Note that Israel is already at war with Iran, in Syria.

Iran launched a satellite on Tuesday that failed to reach orbit, after the US warned against the launch earlier this month.

The satellite “did not reach enough speed in the third stage and was not put into orbit,” Mohammad Jahromi, the country’s Minister of Communications and Information Technology, told the official IRNA news agency after a ceremony was held for the launch at Imam Khomeini Spaceport early Tuesday.
The minister said Iran would launch another satellite soon.
US Secretary of State Mike Pompeo warned Iran earlier this month to scrap its planned satellite launch, threatening to increase sanctions on the country.

The perception that we are fed, in the US, is that Iran is led by “mad mullahs” who will immediately orchestrate a suicidal attack on Israel, if they get the chance. This propaganda is written by “mad christians” and “mad zionists” who only recognize international law when it’s a convenient club to beat someone else over the head with. The US is utterly unscrupulous. 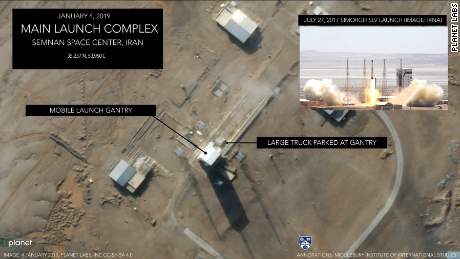 If you step back and look at it, Iran’s actions appear to be mostly bending over backwards to not give the US an excuse to attack. One could fairly call the US/Iran nuclear agreement “extortionate” (what else can you call it, when you’ve been told “sign this or we will continue to crush your economy and force you to sell your oil cheap because of the embargo we placed on it.”)

Don’t tell anyone in Washington that those sneaky New Zealanders are launching satellites, or… uh, never mind. Israel doesn’t freak out about New Zealand.

This article describes some of the issues surrounding whether or not the Iranian “launcher” is easily militarized. [q]

You’ll notice the satellite image is labeled with scary-sounding things like “mobile launch gantry” and there’s a picture conveniently covering the NASA-like vehicle assembly building. Sure, being able to orbit a satellite has “dual use” aspects but it’s far from militarizing a warhead delivery system: those have to be able to re-enter the atmosphere, remember?

You too can be a big hero,
once you learn to count backwards to zero.
“Once the rockets are up, who cares where they come down?
It’s not my department, says Wehrner Von Braun.”