I’ve spent a bit of time in search for steel wire rope to weld into sharp, pointy things. It’s been a fun quest. I assumed for a long time that the stuff would be all over the place, up here, because of strip-mining and logging.

It turns out that it’s not, for a reason that was simply explained to me, while I stood in liquid mud up to my knees, by a nice guy with an oxyacetylene torch.

After asking around a bit, everyone I talked to converged on one recommendation: Novey’s. 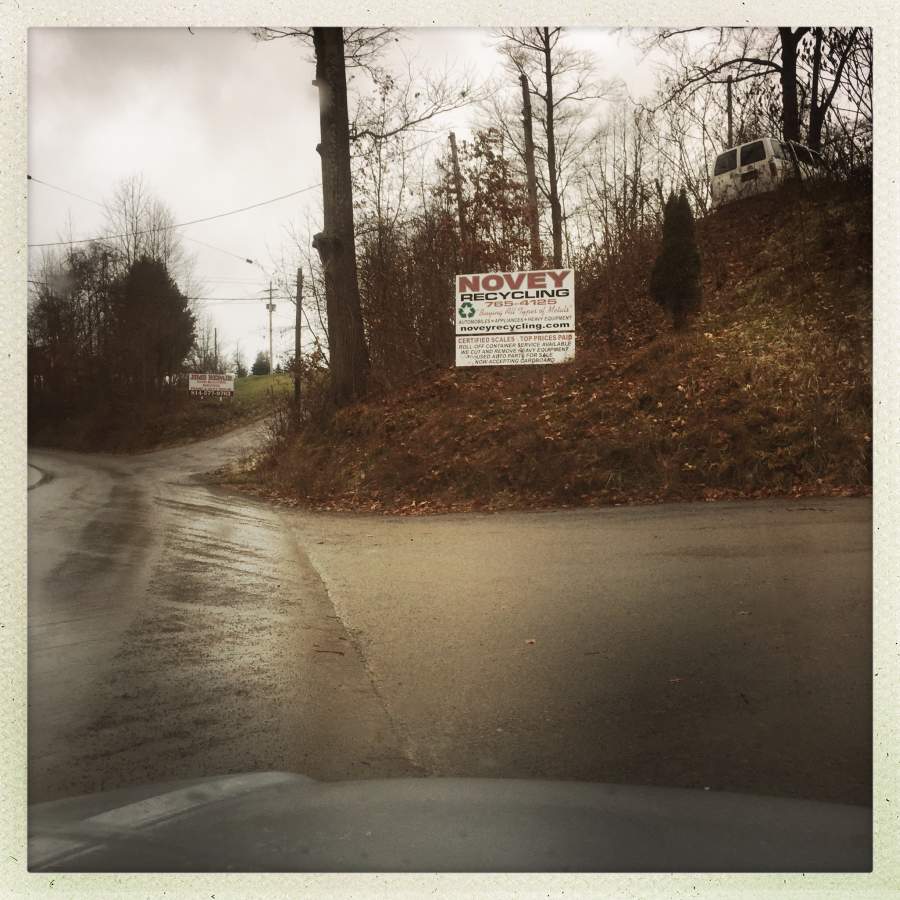 Noveys is where America’s industrial heartland goes after it has died; it’s a mortuary for bridges, machines, scrap, I-beams, semitrailer bodies, rebar, whatever. I went to the office and asked, and they said “We get cable in sometimes. Go back down the left side, and ask the guy with the white hard hat.” 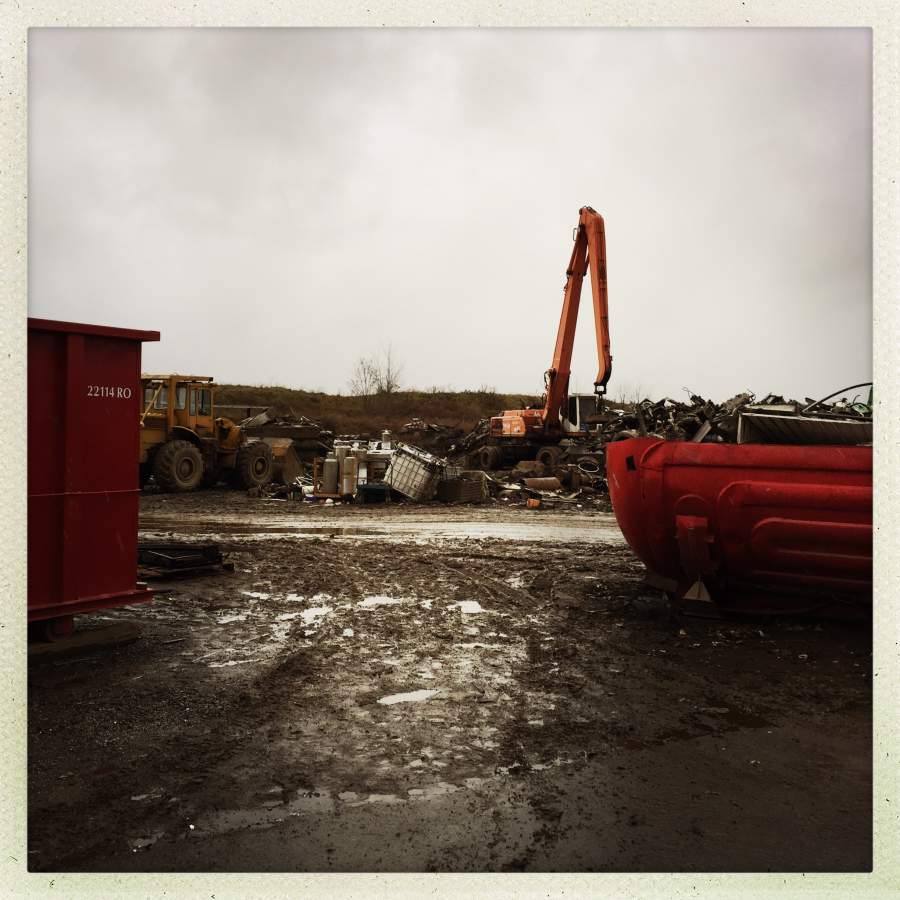 Once you get past the perimeter the mud gets deeper. As you move through the “aisles” it has mostly been churned to a glue-like consistency about 12″ deep, except for the spots that are about 24″ deep. I found a couple of those and had a chat with the guy in the white hard hat.

He said that cable is a huge pain to deal with on account of its more or less indestructible nature, combined with its flexibility He painted a brief word-picture of chunks of 2″ cable lurking in the mud, waiting to snag the transmission of a bulldozer and rip it out. I found that all quite believable. He said that once it’s been stretched straight, it likes to stay that way, and if you have a bunch of it, the ends will try to stick out and shred anything that snags on them. He said I could grab any chunks I found but, honestly, I just wanted to get out of there. I also had a lot of time to think about “mystery metal” – a lot of blade-smiths will grab stuff from a junkyard and make things out of it, not sure until the last minute if the steel is crap or great material. 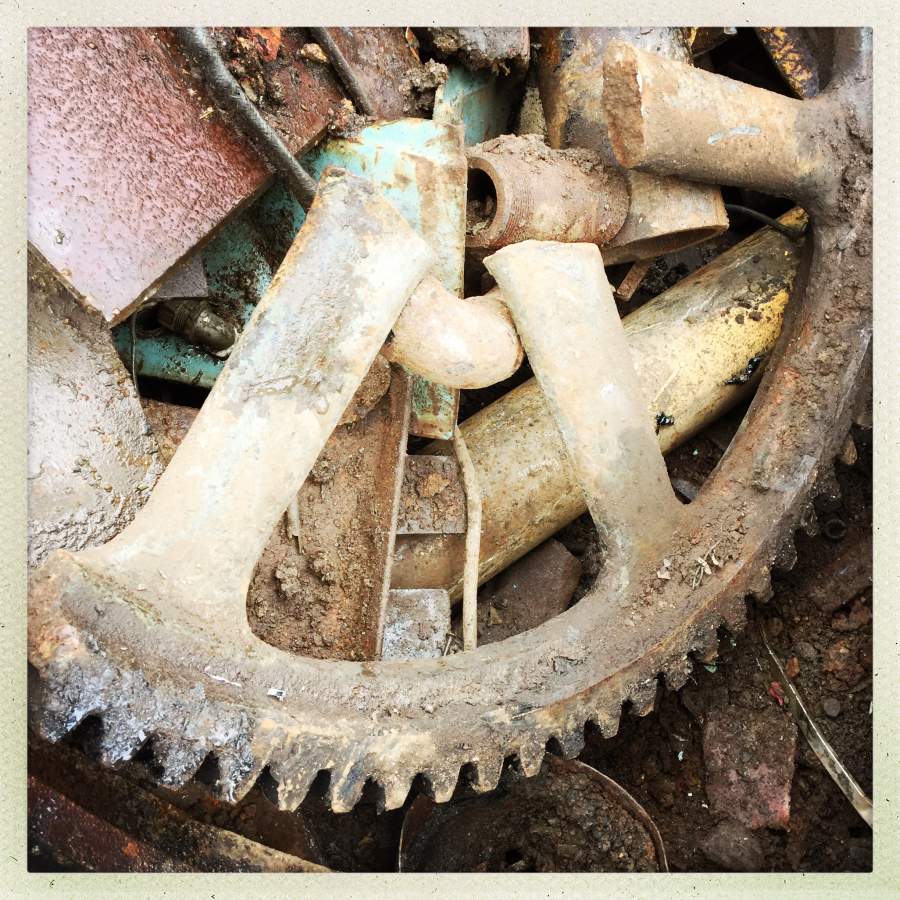 I nearly took the gear home; it looks like it’s yummy sand-cast steel, but it might just be cast iron (useless) – the problem was that it weighed about 80lbs and I would have had to carry it back to my car with my arms wrapped around it like a greasy baby, and if I stepped in a deeper mud spot, everyone would be wondering “whatever became of that Marcus guy?”

Besides, cold mud really conducts cold well, and I was starting to go numb below my knees. 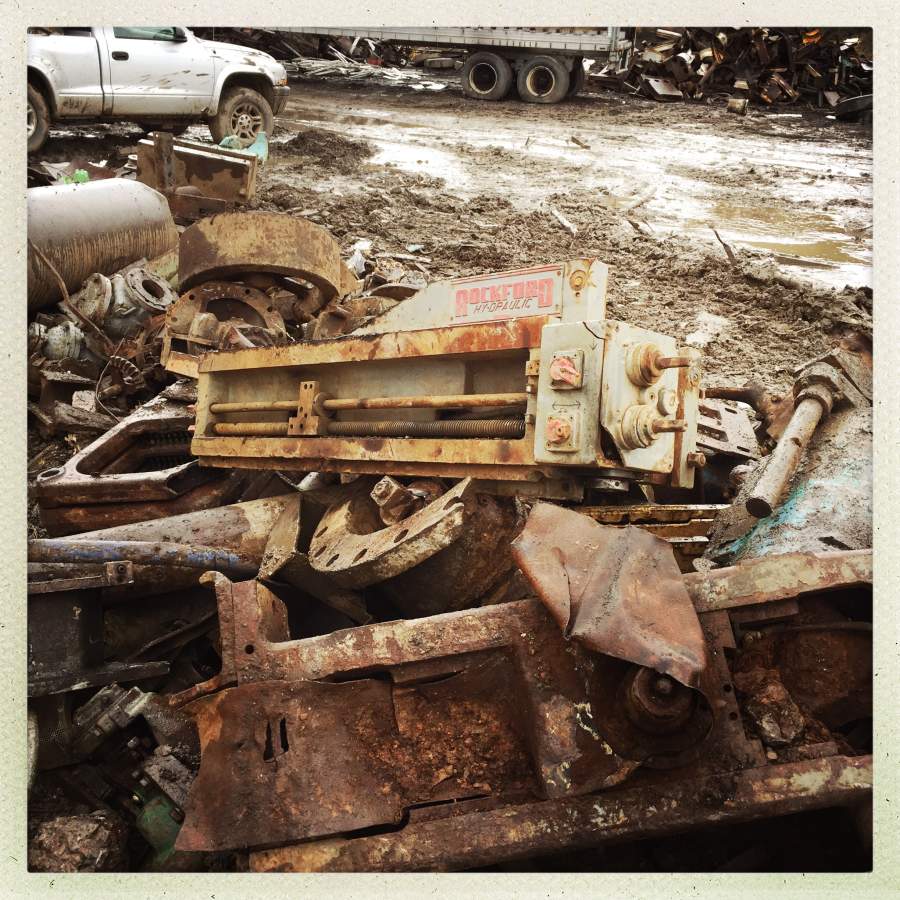 That sad-looking piece of metal is what remains of a lathe – once a beautiful piece of precision machinery capable of making other precision machinery with accuracy in the 1/100,000in range. That central screw is yummy high carbon steel, no doubt, but it was rusted immovable and the ways (that’s a single huge casting) was impossibly heavy.

It took me a while to get clean once I got home. One of the things I have never regretted doing, when I renovated the house, was installing an all-weather hot water hose-bib on the side of the house. So, if event of epic mess, one can hose down in a cloud of beautiful steaming hot water (with some home-made soap!) standing out in the yard while it snows.

That was the end of my trip to Novey’s.

Then, I just said “screw this” and called a company that sells wire rope for industrial applications (cranes, boats, elevators, stuff like that) – a nice-sounding guy answered the phone and I said something about being a bladesmith looking for swaged high carbon steel wire rope, 1 and 1/2″ or thereabouts. He said:
“We get a surprising number of calls from your lot.”

He was tremendously helpful and explained that what I wanted was not “drag line wire rope” it was “plow rope” (whatever that is!) and they had plenty of it and he’d really appreciate it if I was not one of those annoying bladesmiths who call up asking for 3 feet of 2″ wire rope. He explained that he, in fact, has a business to run.

I said, I proposed to buy “a lifetime supply” of wire rope, and that meant buying way more than I would probably ever use, so that way I would live a long and tranquil life and die with an impressive supply of wire rope for some frustrated estate-sale agent to deal with. To which he replied:
“Here is the part number: 01096wc637b”

That’s how I wound up getting a call last week from the trucking company, and a nice man delivered a pallet with 75 feet of 1 1/2″ wire plow rope. 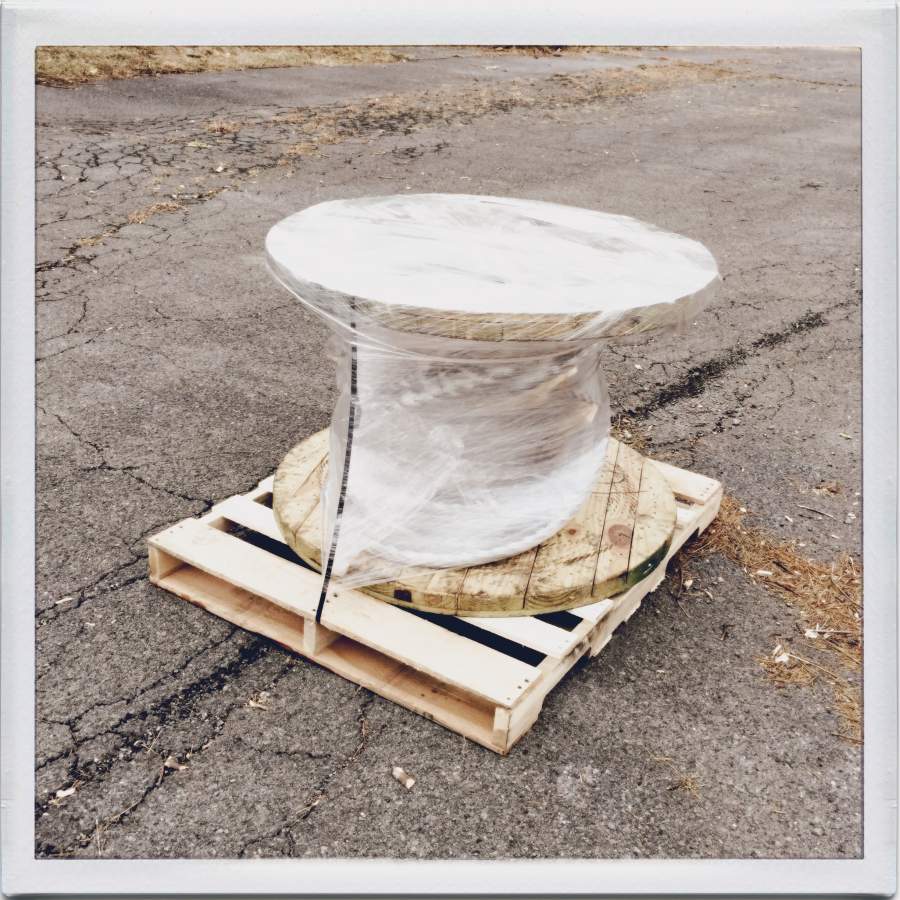 I am 57, and I keep coming up with projects that involve things like “move 500lbs of wire rope up a hill, up 2 steps, and into a building.” Naturally, I am optimistic because this thing ought to be a piece of cake after moving the Bridgeport mill.

And, honestly, it was not that bad. It’s on a wheel (you probably noticed that) so once I got it upright using a 6′ steel bar with me hanging on the end, it rolled up to the side of the building with some mere huffing and puffing.  I have gotten professional enough at moving big heavy things that I measured it to make sure it would clear the door before I tried to fit it through the door. I had 1″ to work with.

So, Plan A for getting it in the door: roll it back about 20 feet, aim carefully, get up a head of speed and see if it can just go right up the step on its own. Plan B: shine a laser along the flat side of the reel and aim very carefully before trying it. I went with Plan B, which was a bit more effort, but it worked incredibly well! I got up a head of steam and the roll of cable crunched right up the step like it wasn’t there, through the door, and then rocketed off down the hallway of the building – because I couldn’t stop it since I was on the wrong side of the door as it went through. Fortunately, it did not hit anything that mattered but the situation had some great dramatic potential. 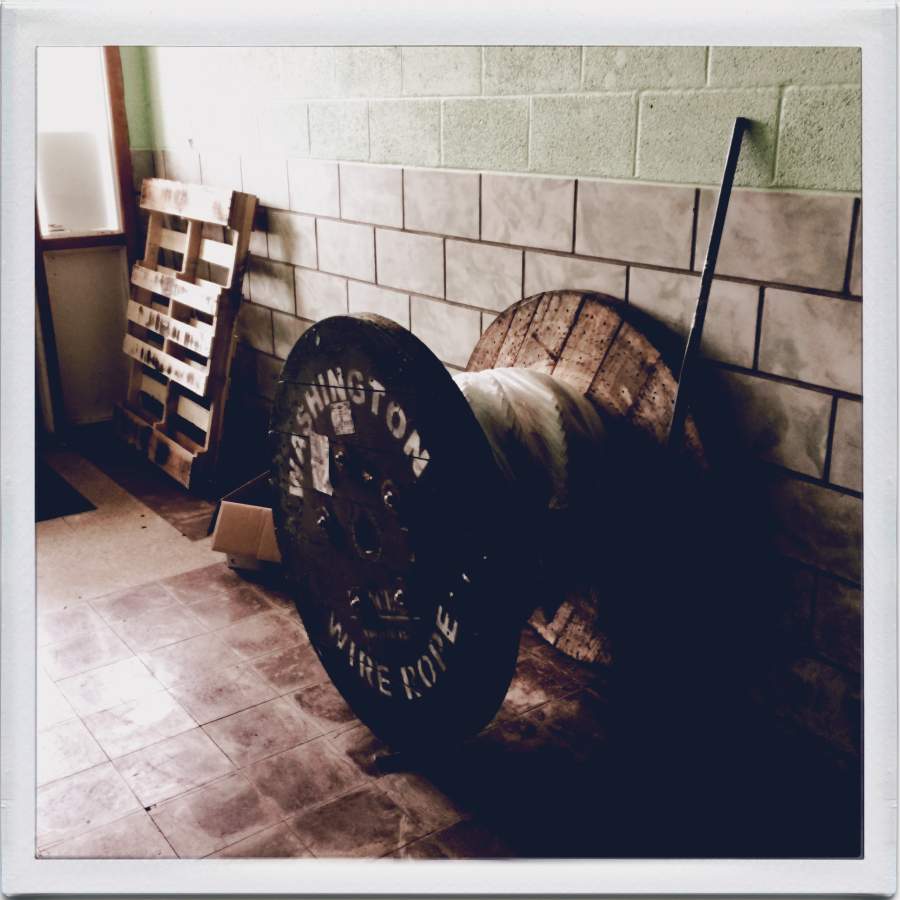 I am going to let it rest while I catch my breath.

Which brings me to the “danger” part. The side of the roll against the wall is labeled “DANGER” in letters expressing certainty. I am not sure what is dangerous about this thing, other than parking it on my foot or losing control of it and having it bounce into the street. But I take the DANGER seriously. I wonder if the DANGER is that, if I unwrap it and cut the wire holding the wire rope against the wheel, if it will “unzip” in my face like some kind of spring surprise and I’ll find myself suddenly in a room full of loops of wire rope? Or, what? Perhaps the danger is that I will find it impossible to get the wire rope off the reel with my puny muscles. That would be awkward.

My plan, at this time, is to call the nice fellow at the rigging supply company and let him know that everything got here fine, “but can you tell me what is likely to happen when I unwrap it?”

I can cope with any likely scenario: my current plan is to wait for a cold day and unroll into the parking lot, then practice my oxyacetylene torchmanship by chopping it into 6 foot sections which I can stack someplace where they will not pose a DANGER to anything.

The economics of wire rope are interesting. The stuff is cheap but moving it is expensive. It occurred to me that I could have gotten two lifetimes’ supply and posted a thing on some of the knifemaker bulletin boards “getcher high carbon steel wire rope here!” except then I would be the guy dealing with bladesmiths who want a 6 foot chunk of wire rope. I realized, as I was pushing that damn reel up the hill that I don’t want to handle  wire rope any more than the guy at the rigging supply company does, or the guy at Novey’s does. It’s nasty stuff. But so yummy. So, it’s about $10/foot in less than 100 feet. I could have gotten 100 feet for what 75 feet cost me, except then I’d have had a 600lb mass of cable to deal with. Shipping chunks of wire rope around in USPS flat rate boxes would a) amuse me b) piss off the postmarm at Morrisdale post office (I like her and have no desire to have her pissed off at me) c) take a lot of my time d) come with a slight chance of danger, whether in the form of an o/a torch accident, or a chop-saw wheel exploding, or an angle grinder going in my face. If I were going to sell wire rope to bladesmiths at cost I’d lose money on handling and shipping. And if I wanted to break even I’d be selling the stuff for way more than anyone would want to pay for it (“What?! That stuff is $10/foot! I’m not paying $50 for a foot of it!”) I’m afraid that the poor long-suffering friendly guy at the rigging supply company is just going to have to keep dealing with annoying bladesmiths; I will suggest that they only sell in “lifetime supply” quantities.

The “Be More Cynical” Quiz! » « Withdrawal, A Brief History