Since 2004 or so, I’ve done a column over at SearchSecurity [ss] which started out as me doing a point/counterpoint with Bruce Schneier and ended with me interviewing interesting people from all over the field. I’m stopping doing the column, finally, this fall, due to “internet security fatigue” triggered by decades of saying the same thing.

It’s a real privilege to interview some of the people I’ve managed to get hold of, and the last interview posted was a special thrill: I interviewed Tom Van Vleck. [multicians] Tom’s been a personal hero of mine since the late 80s, when I encountered some of his commentary on software development. It was around that time that I was asking “why is so much code so bad?” but I hadn’t seen nothin’ yet. You know how every device you carry seems to be constantly updating itself? That’s because the software engineers writing the crap that runs on it are incapable of writing stuff that’s not so buggy that it can’t hold itself together and stagger along for a year or even two. When I started doing development in the 80s it was expensive to release software so we tended to do things on an annual cycle. Now, it appears to be weekly – which has severe consequences for system dependability.

The interview is here: [thvv] and it’s (unfortunately) just a slice of a fascinating 25-minute discussion.

Tom Van Vleck: Let me start by saying that my understanding has evolved. One of the things that I worked on was the Multics system administration facilities — and they were quite elaborate. They had many commands and tech manuals describing how to use all those commands, and we built a special-purpose subsystem with different commands for the system administrators and another set of different commands for the system operators. Remember when systems had operators who were trained to operate the computer, instead of having everyone operate their own computers with no training at all?

It was big mistake, in retrospect. It used to be that after the Multics operating system crashed — in large part due to the hardware, which was much less reliable than it is now — the operator would have to go through a very complex set of recovery steps to get the system back up and all the files happy again. Over time, we realized that every place where the operator had to make a choice and type the right thing was a chance for them to type the wrong thing. Over time, we evolved to a thing where — when the system crashed — you said start it up again, and if it turned out that you had to run some recovery step, the system would decide whether or not to do it, and we designed the recovery steps so they could run twice in a row with no negative effect. We aimed toward a completely lights-out, ‘no chance for mistakes’ interface.

Tom’s comment is on my mind because I was recently involved in an unnecessarily exciting incident response that was a result of an open-ended administrative interface. This was a fairly important system (the resulting data breach included tens of millions of people…) and the system administrator was comfortable setting it up so that a lot of the operational stuff was run from his personal account. It was easier than reaching for an administrative credential. When the time came to set up servers at AWS cloud, he did it the same way. And he appears to have used the same password for one of his personal accounts on some other website, as for the AWS and corporate instances. Comparing that to what Van Vleck describes above, that was an unrestricted ‘any mistake is possible’ interface. 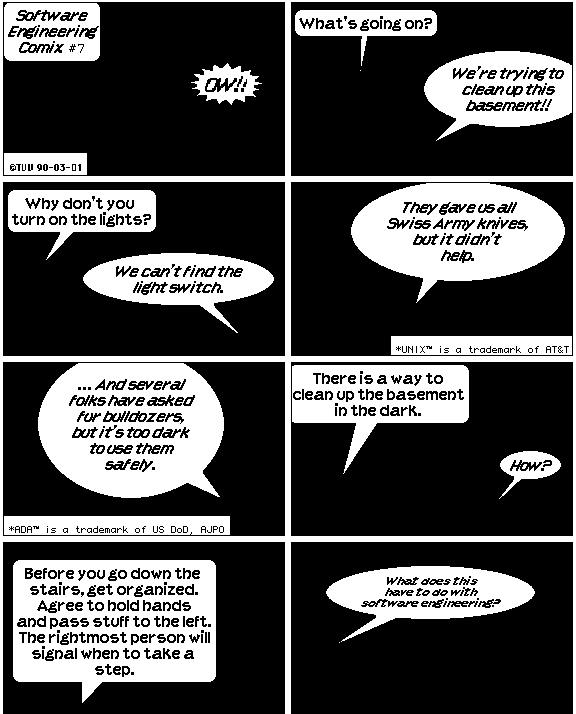 Ranum: There’s some relationship between administration, reliability and security. It’s always seemed to me that the reason we have security as a field at all is since the ’80s we’ve screwed up system administration so badly that our systems are neither reliable nor secure.

Van Vleck: It’s sort of true. The cause and effect that you paint is arguable. We’re building code that only works sometimes; this is the big mistake. Whether those failures produce insecurity or unreliability is a second-order issue. We’re not building code to a high enough standard of doing what it’s supposed to do.

When you talk to these ‘old school’ programmers, they see software as the output of a process that begins with a purpose (strategy) then migrates to a plan (strategy) that is considered in terms of its inputs, outputs, and expected behaviors. Then and only then is the plan broken up into functional components (strategic design) which get implemented as sequentially smaller planned and designed modules. If it’s an important design, the modules will generally include administrative interfaces, maintenance interfaces, diagnostic interfaces, test harnesses and test inputs.

Back in the day, when I used to code something, I identified the subsystems and wrote test harnesses that automatically did a regression test as part of my build process. The inputs and outputs shouldn’t change unless I expected it, so the test harness was responsible for exercising the system with some reasonable operations: insert 50,000 items into the database counting duplicates, then count the total number of items in the database (should be 50,000 minus duplicates) then delete 12,001 items and read them back in order (order should match the results of ‘sort’ and item count should be 37,999 minus duplicates) You get the idea: the system should check itself against its own specifications.

Go read the rest of the interview, and the rest of the stories on Tom’s page. I used to assign new-hire programmers to read his stuff. This one is a classic [three]. Three questions to ask about every bug you find:

One hoary old programmer once said, “the premise of ‘software engineering’ today is ‘how to write software, for those who cannot.'” and that’s pretty much right. There was a brief period around 1987 where structured software development (an over-reaction to poor quality) was the rage, but since August 9, 1995, “more code faster” is the order of the day. “Better code” would only matter if it was somehow a market proposition. You can remember that the next time Yelp’s app downloads (it seems to update a gigantic bolus of data onto my iPhone about once a week) – this is not just ‘shovelware’ it’s ‘big shovel’ware.

August 9, 1995 was the Netscape IPO. I was in a data-centre in Dallas, working on a project, and we watched the ticker go crazy as Netscape’s stock rocketed up and up. Kent L, who was standing next to me, said, “this will change everything.” And it did. The software market suddenly was no longer valued based on problems solved, but on size of customer base. It heralded in the era of beta-test software masquerading as production. We are now in the final stages of that, in which developers are now managing production systems – they call it ‘DevOps’ and some of us call it ‘DevOoops.’

The Real History of a Time » « Not Your Usual Landing