The people who read and believe this stuff are the foundation of American anti-intellectualism. And they vote: 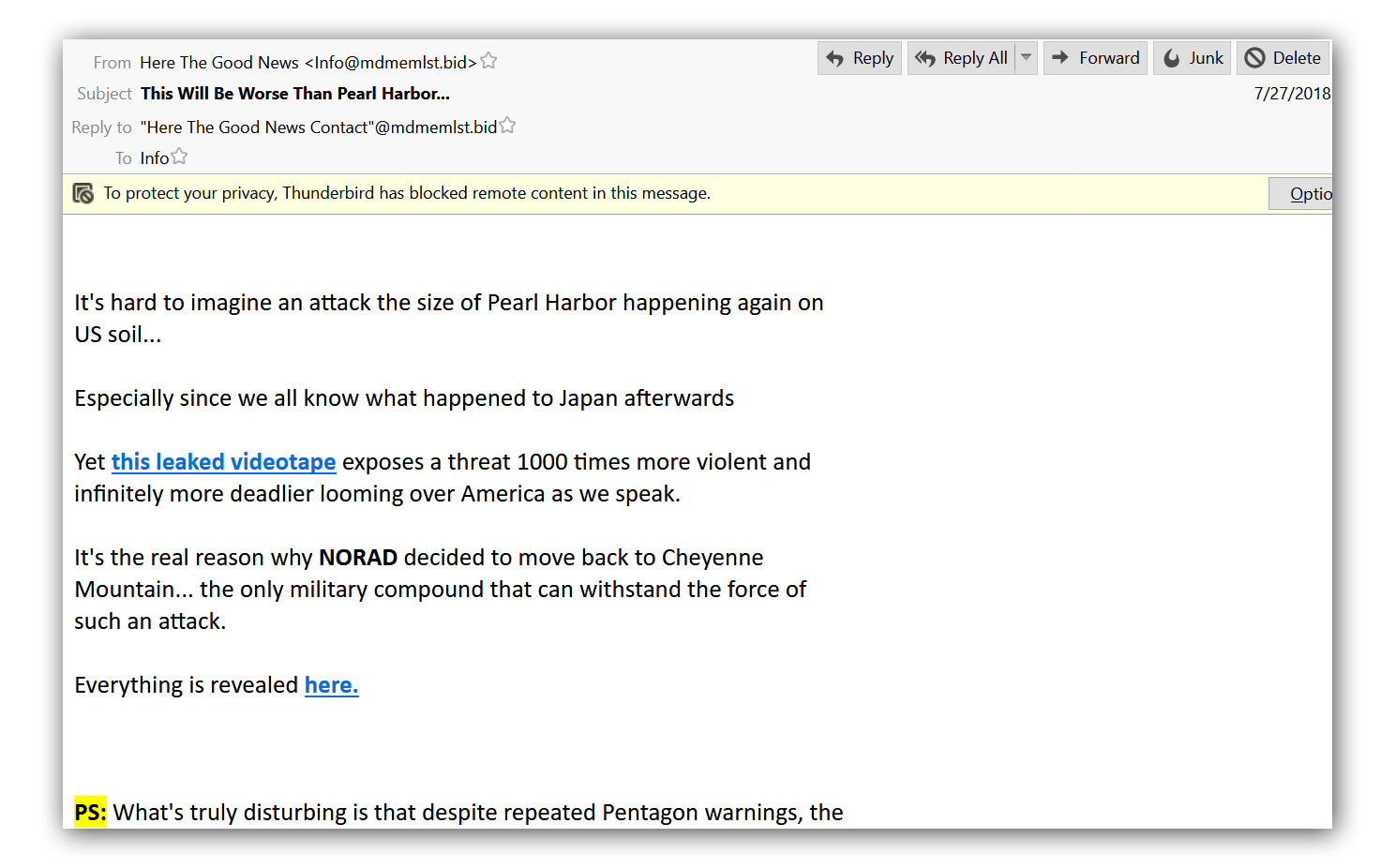 I never expected my spam-box to become a source of material, but it slowly sunk in to me that this is important “cultural context.”

Americans have always been ‘fraidy-cats that you can sell tactical gewgaws to, when you need to raise money. This sort of blatant appeal is the same message that motivates Jim Bakker (and Jim Jones’ for that matter) base to act: mysterious abstract fear or something-or-other undefined.

For one thing, Pearl Harbor was a strategic failure and didn’t really do that much damage. Sure, it shocked the US imperium into action but in terms of military significance, it wasn’t that big a deal and it was only a surprise because the US was complacent, ignored its intelligence service and diplomats, and responded incompetently. So “bigger than Pearl Harbor” means, what, exactly?

I used to have a loose friend (a “loose friend” is someone who thinks you’re their friend but you consider them more of an acquaintance, keep in touch with them periodically, but don’t go much out of your way to spend any time with) who used to believe all the ‘EMP bomb from North Korea will throw us back into the dark ages!” nonsense. At first, I tried to explain that atmospheric EMP tests had been run in the 50s and 60s and that he should read up on HARDTACK ORANGE and maybe he’d notice that it hadn’t thrown civilization back to the dark ages, except for in San Francisco. I tried to explain to him that nuclear forensics includes some very clever and effective techniques (I only know the declassified ones) and that there really is no such thing as an “anonymous nuclear air-burst”) after a few back-and-forth exchanges about the topic, he’d shut up about it for a few months then suddenly he’d come right back with more of the same. I eventually realized that he wasn’t listening to a damn thing I was saying, so I “went meta-” and said:

“T. –
I realized that we’ve discussed this before and it finally dawned on me that you simply are not listening. I keep trying to explain facts and prior knowledge, and you keep coming back with this strongly-held opinion that this horrible thing is going to happen any day now. For over a decade. I’m tired of trying to explain it to you, so I think it’s best if you no longer consider me part of your circle of friends, and I add your email address to my spam filters, and we don’t have this kind of discussion any more.”

And that was that. Why do we allow these time-wasters to come traipsing into our lives and create these pointless discussions? I realized, in that moment, that he was basically a spammer to me – and his opinion mattered about as much.

I’m back on haitus from Facebook and Twitter (just in time for the internet advertising bubble to begin to wobble a bit!) because another ‘friend’ managed to make a comment which showed up on his time-line which sucked in a bunch of mormon reactionaries, ex-military, and other flavors of time-wasters. After thinking about it for a bit I realized that the only way to prevent that from happening was to start dropping any of my ‘friends’ who ever did that to me. The time before, when I went on haitus, it was the same thing – I dropped everyone who posted a kid picture, a sports picture, or anything religious. It turned out to be a good exercise; I discovered that I only valued a small handful of friends and they weren’t why I was on Facebook in the first place. Buh-bye!