(Learn From My Fail)

This is painful and embarrassing. But it’s a learning experience – I’m going to cling to that. Meanwhile, I am still breaking out into intermittent gales of cursing.

I’ve been experimenting a lot with wrought iron forge-welded onto modern steel, and I did some fun effects using nickel foil as a transition boundary. That has all been good fun and one of the other bladesmiths I’ve sent wrought/1095 bars to has been very happy with the stuff.

Since the class I’m going to in Oregon next week is about detail blade-shaping, I thought maybe I should take more than just the wakizashi blade I made last summer. Perhaps a cooking knife with an interesting and unconventional grind? Sure. So I hit upon the idea of making a chisel-ground blade with a flat/hollow side and the other side with a shinogi (ridge-line) like a dagger or a sword. That would help keep it nice and strong and it’d give me lots of space for a great big flat bevel.

I have a pretty good inventory of bars of various sorts on my table. One of them had about the right shape so I took a look at it, then laid it out and started cutting. Now, “take a look at it” means look at the edge of the bar and any cut regions, so I can see what it’s composed of and decide where to put the edge, etc. On this bar, it appeared to be a wrought iron-faced piece of 1095 with a foil transition-line – perfect for an asymmetrical grind. There’d be 1095 on the back and wrought iron on the edge-face with a crazy big transition-zone where the 1095 was exposed. 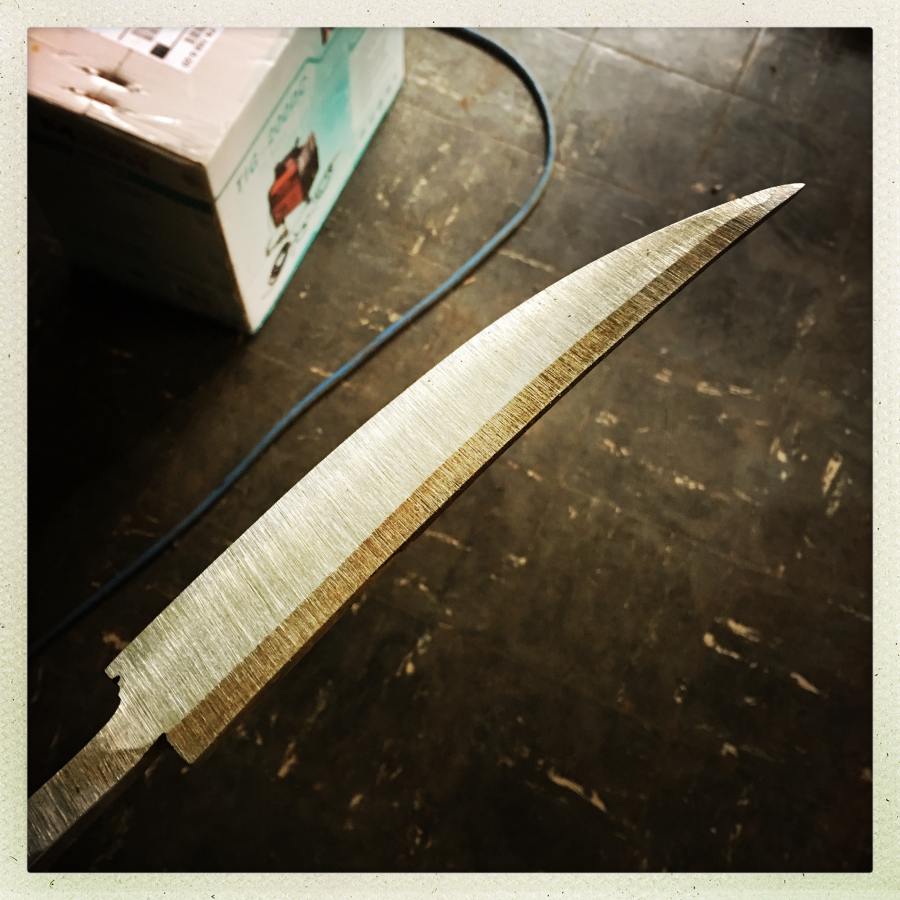 I’m happy to see that I can do a big grind, freehand. That was looking nice so I quenched it and let it cool then got back to grinding it some more. So far, we’re talking about 3-4 hours of work.

Now, before I really got going, I dipped it in the acid a bit so I could make sure I knew which side was the wrought iron. One side (above) was clearly wrought iron, and – as I chewed into it – there were signs of the transition boundary. Alles klar, Herr Kommissar? I even checked the hardness (more on that in a second) with a scratch-file and it looked to be about RC59. Nice.

Then I started getting down to finer grit sandpaper and the edge began to develop, nice and straight. Time for a pre-finish etch so I can see where there are scratches and how it looks.

That was when I had this huge “WTF?” moment. 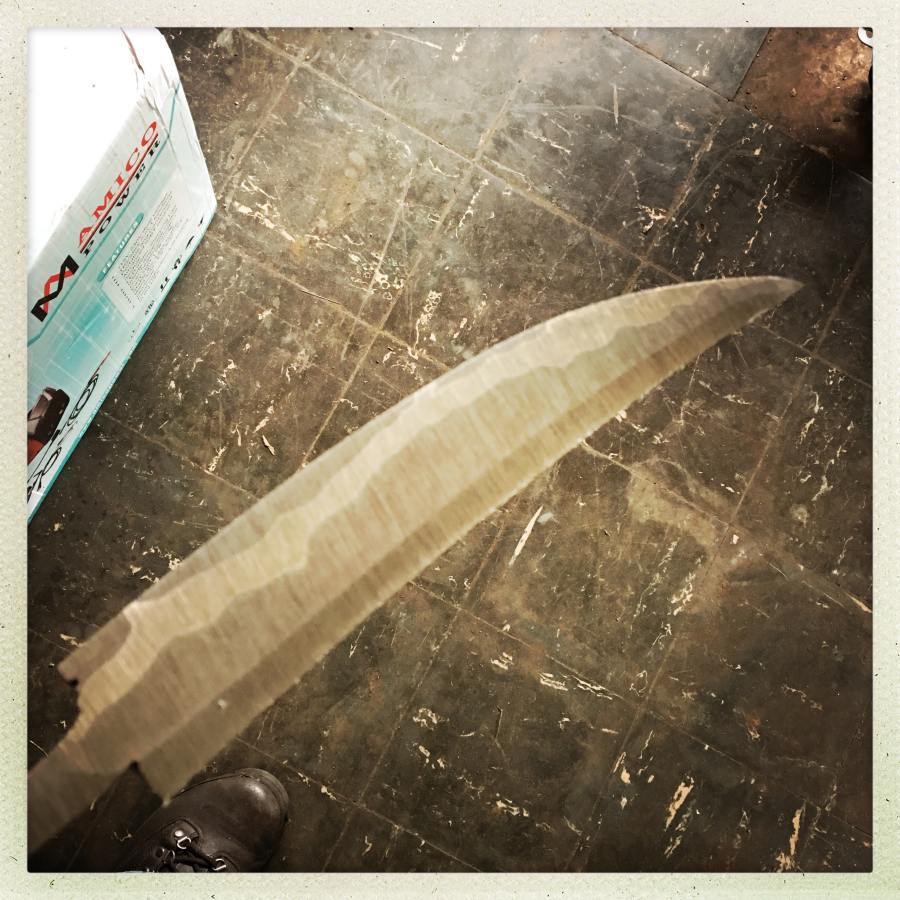 picture is bad; I was rattled.

The exposed edge is not 1095, it’s wrought iron. I must have scratch-tested the zone of exposed 1095 which is a nice RC59 not the wrought iron, which is soft and will never harden.

Back over on the bench was the original bar I had selected. Somehow I had put down the bar and picked the wrong one back up. 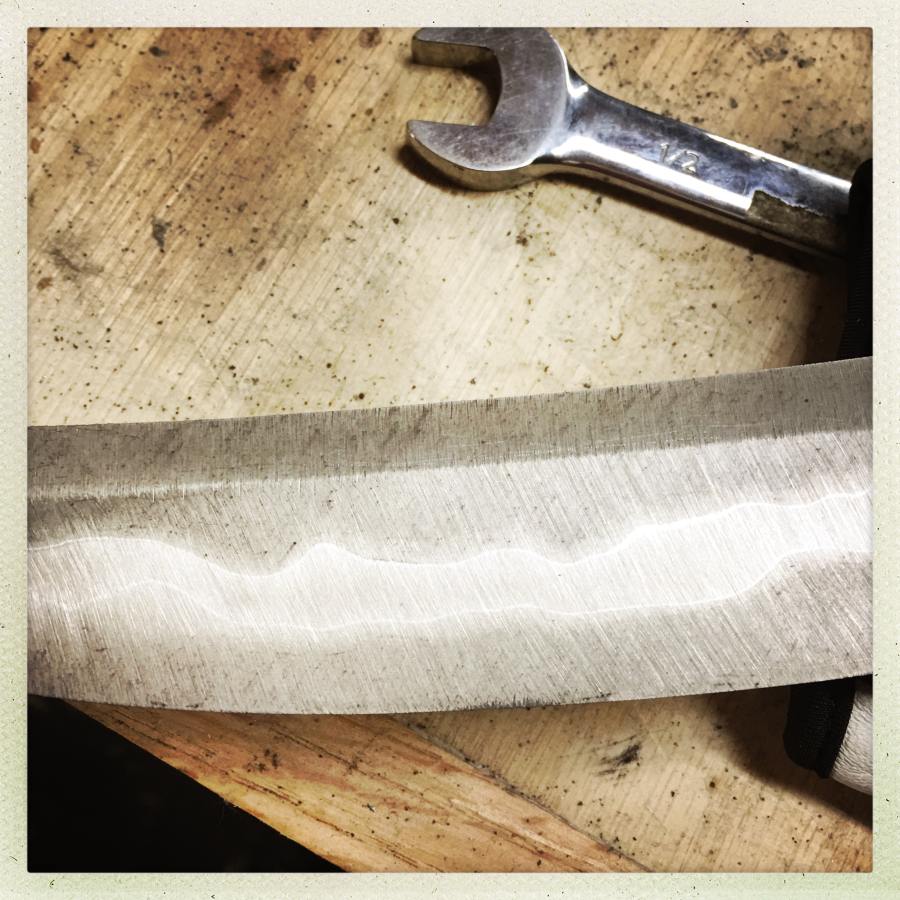 Look at that perfect weld and that lovely transition-zone!

When I had calmed down again, I went to the hardware store and bought a bunch of plastic shoe-storage boxes, which I organized and labeled everything into. I’ve got blank paper work-sheets taped to each project box, with notes about what I expect to do with the piece, and a checklist of steps.

I could probably grind it down into a fillet knife but I don’t think a fillet knife with a ridge-line will get any votes and it’s probably more valuable sitting on my “Shelf of Shame and Glory” as a reminder of another way to screw up.

I have some nice metal-black bog oak I was going to use for a front bolster, and some highly figured red oak for the handle. This was going to be a beautiful and very usable cooking knife. Until I utterly screwed the pooch.

There’s a minor dip in the shinogi that would have straightened out during the final sandpaper finish.

The good news is I have a perfectly nice wrought iron-faced bar of 1095 on my bench so that next time I try this, I’ll do it better.

Also, another little way I screwed up: the knife is ground with the chisel-face on the wrong side. It’s a left-handed knife. I suppose I could lie and say “I planned it that way” but I didn’t. That’s not a big deal, I know left-handed people and they’d be perfectly happy to assume I made it just that way on purpose. I was not on the ball, today.

Work Up That Base » « Non-Proliferation