Whenever I make it to the met, I visit the Japanese swords. Some of them, I have considered old friends since I was a kid. To them, I’ll always be a kid. 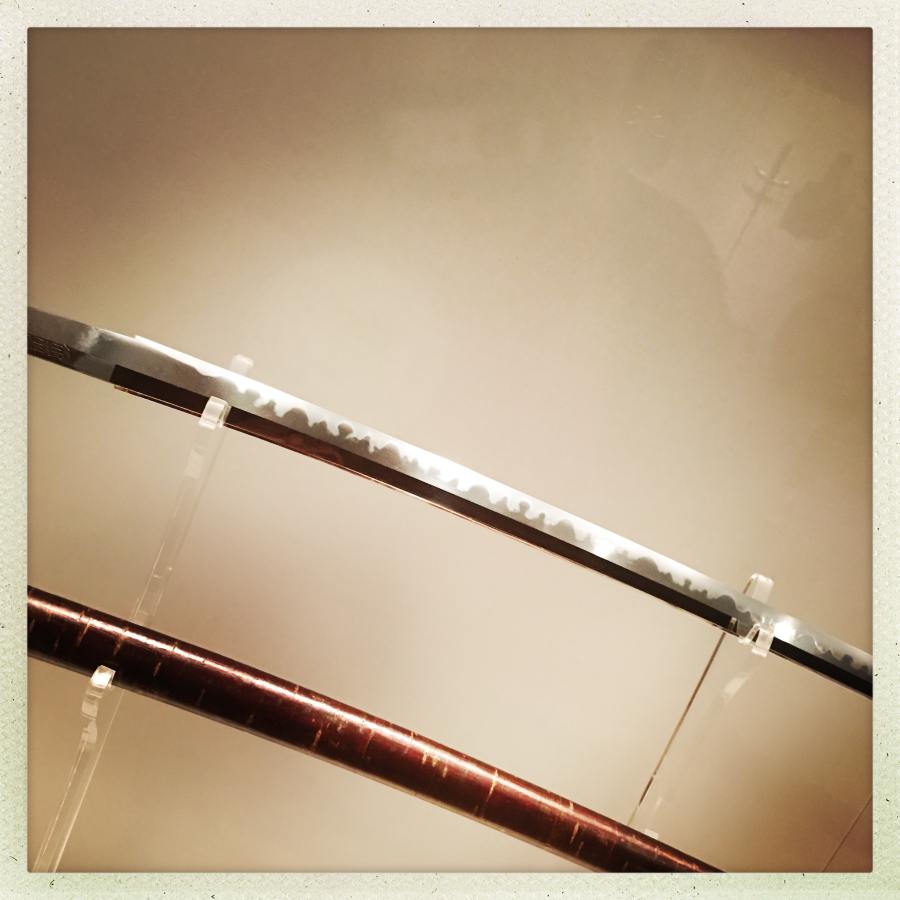 The temper line on this one is extremely prominent. I’m less impressed by it than I would have been a few years ago, because now I know that there’s a lot of burnishing and rubbing with graphite that goes into emphasizing the transition-line. I did something I would not have done before – I craned my head around to the side and looked down the length – which reveals the blade’s edge has been seriously eroded by the many years of polishing. The martensite cloudy edge is harder than the body of the blade, so under endless polishing it tends to abrade less, which makes it stick proud from the geometry of the edge. In my opinion, that’s a polishing job that’s intended to be pretty, not effective, thereby defeating the purpose and the value of the sword. The scabbard, though – it’s wonderful – cherry-bark lacquered onto magnolia wood, it looks like a branch from a particularly straight cherry tree. Exquisite! 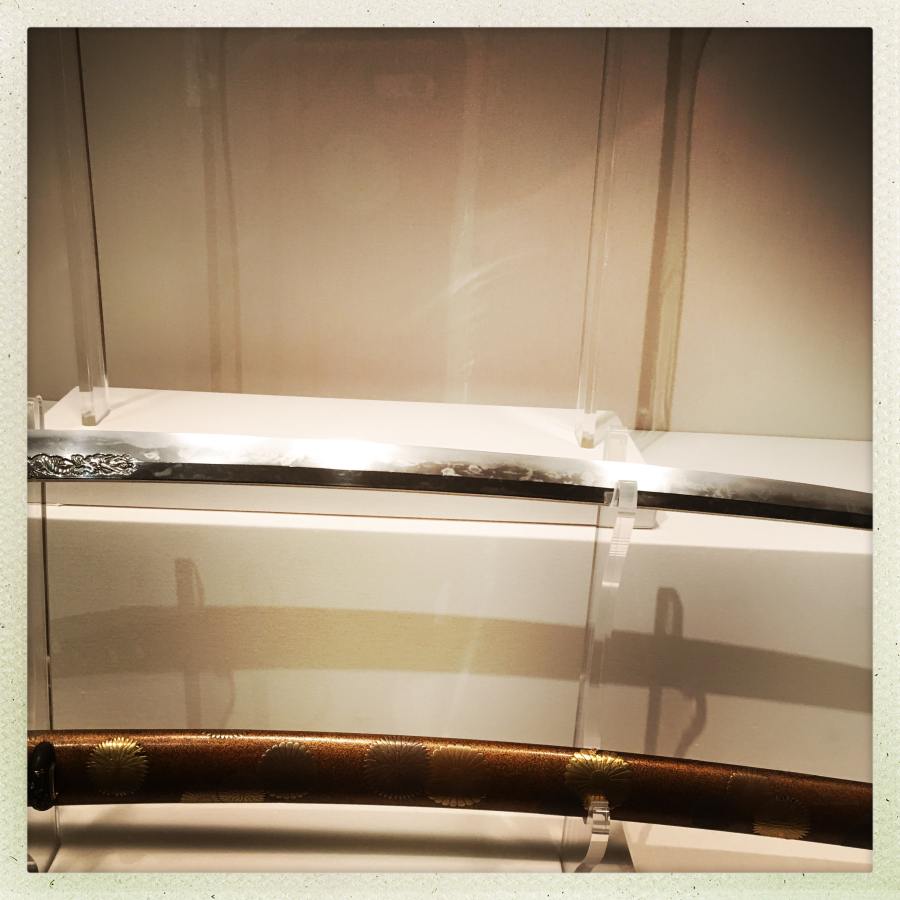 The temper-line on this one is less well-defined, because the different states of metal (probably because the metal is in different layers) didn’t harden to martensite evenly. This blade would be a more practical battle-blade: hard and sharp and tough. 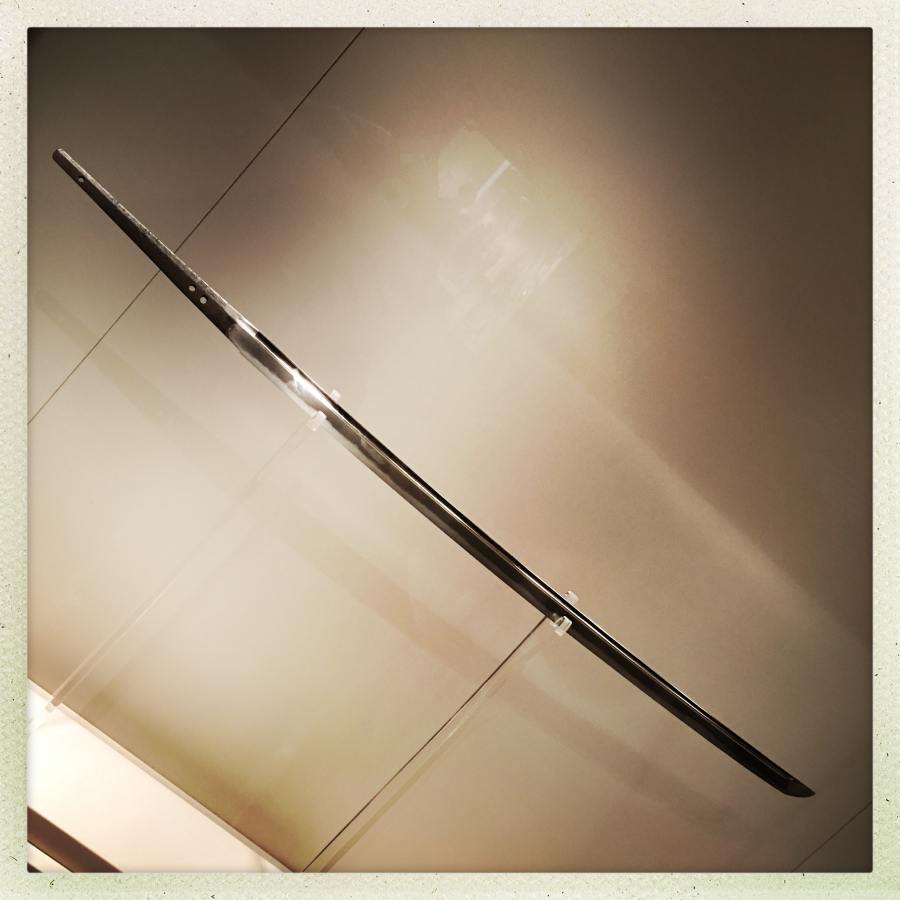 That’s an older tachi-style blade, probably hundreds of years older than the others but still in great condition. The tang has several holes from where it was re-fitted for a new handle, and where it had a two-pinned handle for battle use. It doesn’t have a flashy temper-line or a dramatic curve; this is a no-nonsense sword. 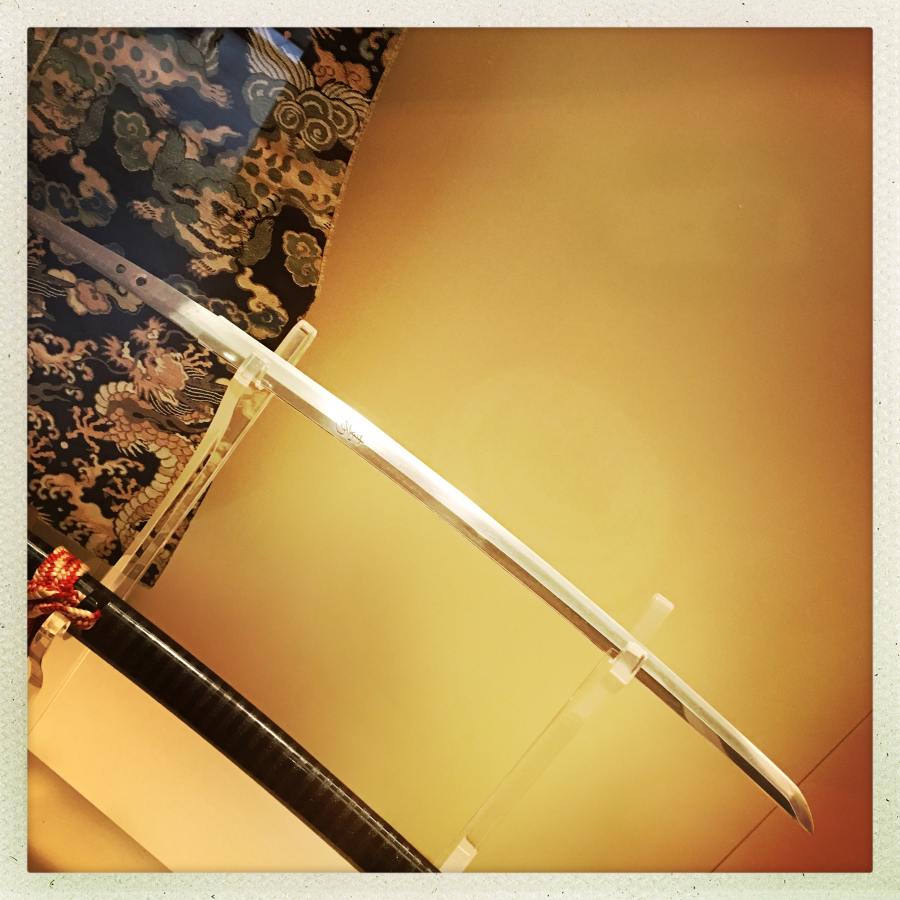 I wish I had taken notes or photographed the case labels. But I didn’t. That seems like a more modern piece. Recent sword-smiths have moved from being fancy to being understated and excellent. The Sanskrit inscription in the blade is typical of the Zen influence in martial buddhism.

This last one is clearly decorative and is stunning to see in person: 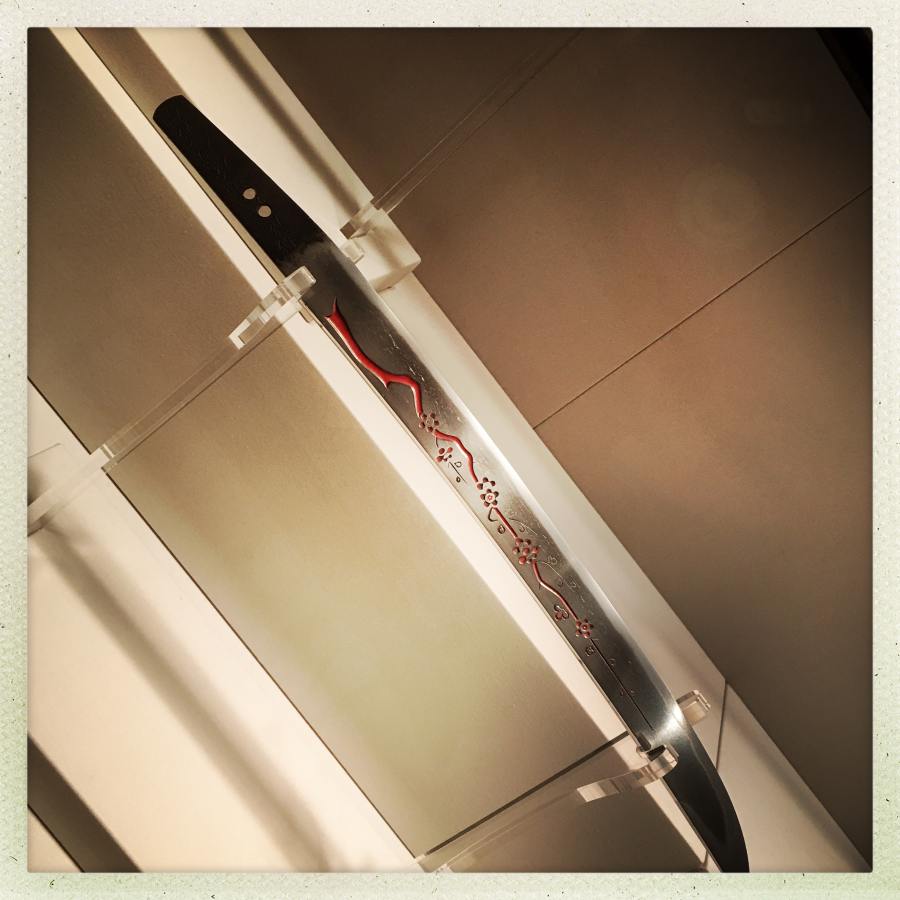 The cut-work would have been chiselled into the blade with a hammer and hard little tools, then filled with lacquer. Imagine the potential for slipping and scratching that blade! The grain structure of that steel is beautiful – there’s a lot of layers including some with silicates. It’s not a battle weapon but it’s still strong and beautiful.

Blades like these are multi-generational collaborations between handfuls of artists. The sword-smith makes and shapes the blade, then turns it over to another artist who’d make the fittings and another who’d build the handle. Then, it might be carved and passed off for polishing and eventually it would wind up in someone’s hands, who would pull it from the case so it could shine in the light of day. When I was a kid I used to wonder what adventures a sword was carried through.

I’m off to Oregon with a suitcase full of metal bars and a couple of blades. Let’s see how this goes! I’m not sure what my posting schedule will look like but I’ll be journaling the class. If bladesmithing utterly bores you, you might want to take a break from this blog for a week.