[This posting is because of discussion about execution techniques stderr]

When I was a kid, we made a family expedition to Menlo Park in New Jersey, and explored Thomas Edison’s old lab, which is now a museum. [men] I was fascinated by the great inventors – I always have been – and it felt like a wander through a stranger’s mind. Exploring other people’s shop-spaces has always held a thrill for me, trying to figure out quickly what this or that doodad is for.

You can’t come away unimpressed at Edison’s doggedness. Nor, once you understand him in an adult context, with the fact that he was a complete asshole. He was dogged and brilliant and stubborn and occasionally turned that stubbornness toward making someone else miserable. The docent at the museum told a story that is still fresh in my mind, about Edison contracting with a local engineering firm to produce him a perfectly square 1-foot x 1-foot block of copper. Naturally, they were thrilled to try to please the great inventor, but every attempt was thwarted: it wasn’t square enough, the dimensions were off, when placed in water it did not have the correct displacement, the weight was off, etc. Edison had simply decided to make the engineers miserable for his own entertainment. 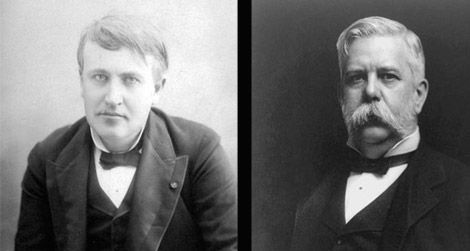 Intellectual giants roamed the earth, then. Nikola Tesla was living in the Waldorf Astoria, holding soirees attended by Mark Twain – Tesla apparently made an ultrasonic vibrating plate his guests could stand on, which gave Twain the sudden need to bolt for the bathroom – and there was Edison, and Westinghouse. George Westinghouse sounds like a horrible person, too; he was one of the robber barons who industrialized the US, and he was as ruthless as Morgan or Carnegie or Singer. For example there was the time he “helped Tesla” by buying his patent portfolio for a tiny fraction of what it was worth: he bought the rights to alternating current and electric motors for about $50,000; Tesla developed AC power generation because Edison (who was much less of a “great inventor” than Tesla) asked if he could design improvements to his system. A competition rapidly evolved between Edison’s DC power and Westinghouse’s AC power. Since there was a great deal of money, and even greater egos at stake, it got nasty.

As a kid I did not know about this stuff; they didn’t include it in the Edison workshop museum, for some reason. In a P.T. Barnum-esque (or now we’d say “Trumpian”) marketing maneuver, Edison decided to cast AC power as being more dangerous than DC power. That’s not true, of course, but electricity was new to Americans and there was this window of opportunity to just flat-out lie about the opposing technology. Which Edison did: he began organizing demonstrations in which an animal was placed in the circuit of DC current, unharmed. Then he’d switch it over to AC, and the animal would be fried. Edison used dogs and cats for these public demonstrations. He began to refer to it as “Westinghousing.”

A circus elephant named Topsy killed a trainer and was sentenced to death (!Americans!) and there was considerable discussion surrounding how to kill the animal – hanging it being technically difficult, and shooting not being sufficiently cruel. Edison suggested “Westinghousing” the unfortunate beast. And so, it was done.

When the day came, Topsy was restrained using a ship’s hawser fastened on one end to a donkey engine and on the other to a post. Wooden sandals with copper electrodes were attached to her feet and a copper wire run to Edison’s electric light plant, where his technicians awaited the go-ahead.

In order to make sure that Topsy emerged from this spectacle more than just singed and angry, she was fed cyanide-laced carrots moments before a 6,600-volt AC charge slammed through her body. Officials needn’t have worried. Topsy was killed instantly and Edison, in his mind anyway, had proved his point.

Cyanide is an extremely unpleasant way to die; I’m glad the electricity worked. As you can see from the clip, Edison leveraged the newly-invented motion-picture technology to record the incident. Motion pictures were another “Edison invention” – he didn’t actually invent them, he had one of his lab-workers develop the technology based on Muybridge’s work, but Edison was quick to profit from them.

American sadism was not done, yet – not by a long shot. It was inevitable that someone would suggest “westinghousing” a prisoner. And, so it was done: William Kemmler became the first person to sit in the first electric chair. [wik]

On the morning of his execution, August 6, 1890, Kemmler was awakened at 5:00a.m. He dressed quickly and put on a suit, necktie, and white shirt. After breakfast and some prayer, the top of his head was shaved. At 6:38a.m., Kemmler entered the execution room and Warden Charles Durston presented Kemmler to the 17 witnesses in attendance. Kemmler looked at the chair and said: “Gentlemen, I wish you all good luck. I believe I am going to a good place, and I am ready to go.”

Witnesses remarked that Kemmler was composed at his execution; he did not scream, cry, or resist in any way. He sat down on the chair, but was ordered to get up by the warden so a hole could be cut in his suit through which a second electrical lead could be attached. This was done and Kemmler sat down again. He was strapped to the chair, his face was covered and the metal restraint put on his bare head. He said, “Take it easy and do it properly, I’m in no hurry.” Durston replied, “Goodbye, William” and ordered the switch thrown.

The generator was charged with the 1,000 volts, which was assumed to be adequate to induce quick unconsciousness and cardiac arrest. The chair had already been thoroughly tested; a horse had been successfully electrocuted the day before.

Current was passed through Kemmler for 17 seconds. The power was turned off and Kemmler was declared dead by Edward Charles Spitzka.

However, witnesses noticed Kemmler was still breathing. The attending physicians, Spitzka and Carlos Frederick MacDonald, came forward to examine Kemmler. After confirming Kemmler was still alive, Spitzka reportedly called out, “Have the current turned on again, quick – no delay.”

In the second attempt, Kemmler was shocked with 2,000 volts. Blood vessels under the skin ruptured and bled and some witnesses erroneously claimed his body caught fire. The New York Times reported instead that “an awful odor began to permeate the death chamber, and then, as though to cap the climax of this fearful sight, it was seen that the hair under and around the electrode on the head and the flesh under and around the electrode at the base of the spine was singeing. The stench was unbearable.” Witnesses reported the smell of burning flesh and several nauseated spectators unsuccessfully tried to leave the room.

In all, the entire execution took approximately eight minutes. The competitive newspaper reporters covering the Kemmler execution jumped on the abnormalities as each newspaper source tried to outdo each other with sensational headlines and reports. A reporter who witnessed it also said it was “an awful spectacle, far worse than hanging.” Westinghouse later commented: “They would have done better using an axe.”

Execution American-style has always been about the Grand Guignol sadism, not about justice or mercy. This was, literally, “cruel and unusual punishment.”

By the way, whenever you hear American politicians complaining about the evil Chinese stealing our intellectual property, know this: the entire American industrial revolution was built on a lot of stolen intellectual property. So, we can definitely say we know what we’re talking about, there. Do you think that Eastman (founder of Kodak) paid Fox Talbot’s patents? Hell no. What about Bessemer’s patents on steel? No Way. Or Jacquard’s patents for machine looms? Are you kidding!? Peter Andreas documents some of this in Smuggler Nation [wc] it’s a good read. Maybe I should do a mini review of it.