Everywhere I look, I see signs that the US has swung the steering wheel hard to the right, and is bumping and swerving into a deep, dark, forest. One with a big sign that reads “Danger, Keep Out” but has “MAGA” written on it in blood-red spraypaint.

In Nevada, the judicial system is planning to use fentanyl for executions. 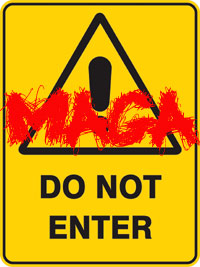 Nevada plans to carry out the first execution using fentanyl, a drug at the heart of the US opioid epidemic, on Wednesday.

The state intends to use a synthetic opioid – involved in more than 20,000 overdose deaths in 2016 alone – to kill Scott Dozier, a double murderer, after finding it difficult to obtain other drugs for Nevada’s first execution in 12 years because of opposition from pharmaceutical manufacturers.

But questions have been raised about whether Nevada’s department of corrections broke the law to obtain the fentanyl, and whether the multibillion dollar distribution company that provided the drug ignored evidence it was to be used in an execution.

Nobody, and I mean nobody is saying that Dozier is not a horrible human being, who showed such disrespect for another person’s life that he shot another man, cut his body to pieces, and dumped the chunks in a dumpster. That is cruel, unconscionable, behavior. So, how does the state engaging in similar cruel, unconscionable behavior somehow re-balance the scales of justice? It doesn’t. What it does is shows that the scales of justice are a cheap pot-metal plated prop for sadistic gerontocrats who want to kill people.* The US is starting to remind me of Pasolonini’s banned film Salo (which I watched because it’s banned) [wc] a disgusting, over-acted, playground for cruel, power-mad, would-be aristocrats.

The US is evolving toward the moral stature of Saudi Arabia. In Saudi Arabia, the law is enforced against the weak by the strong, as cruelly and publicly as possible, to get the weak to understand the situation. There’s some fluff about morality and justice thrown on for the rubes but everyone knows that it’s simply the state instituting a rule of fear: “Look what we can do to you! Fall to your knees before us and submit!” And, if we step back and look at the US, it’s pretty apparent that the US ruling class has wanted to be that honest, all along, but has felt inhibited by the tiny shreds of humanism that it is now divesting itself of. 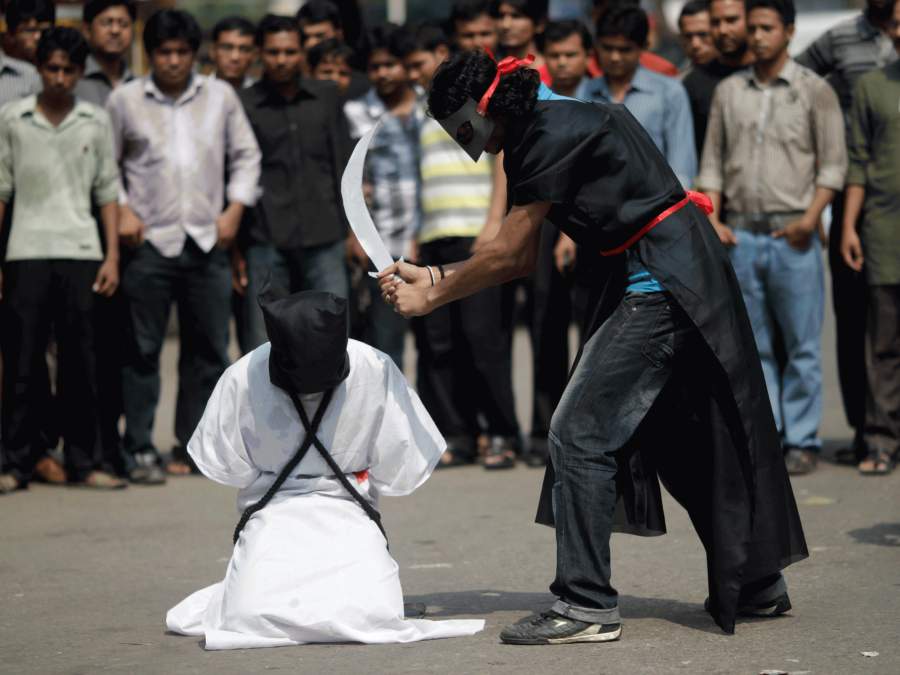 The crowd in the picture of the Saudi execution appear to be lower class. There are no thawbs or bisht at all; they are watching one of their own die. If we ever see a rich, powerful, person kneeling for the headsman, it’s because they lost a political argument with one of their superiors. Americans should see their future in that: white supremacists want to be able to kill with comparable impunity. The woods are very dark, indeed.

When I look at the picture from Saudi Arabia, I have to reflect on De Boetie’s question about involuntary human servitude [stderr] – the onlookers outnumber the headsman and he only has a sword. They could disarm him easily. Why are they standing there watching? Can’t they see themselves in that kneeling position? For that matter, can’t the white Americans who watch ICE taking away hispanics see their own future in the red and blue blinking lights? America has a rich history of ruthlessly suppressing its working class with police violence – do they think ICE is on their side?

There’s some kind of weird egalitarian symmetry that fentanyl – a drug that has killed some famous and wealthy people like Michael Jackson and Prince – and many less notable addicts, is going to be weaponized by the justice system against the people. There are probably some people in prison for dealing Fentanyl right now – their mistake was that they didn’t do it for the Nevada department of corrections. “Department of corrections” – what about killing someone is “correcting” them? How does this help anyone or anything, except to fulfill the state’s thirst for blood?

* A note on Sadism. De Sade was very familiar with prisons; he occupied the social role of an “extremist troll” like a Milo Yiannopolous for his day: shocking, self-contradictory, attempting to ‘get back at’ high society, which had imprisoned him for his tastes – tastes which more well-behaved aristocrats were perfectly free to sample discreetly. Underlying his stories is a deep concern with the notion of justice, but mostly with how it relates to political hypocrisy. De Sade would be the patron saint of executioners, except that he’s already the patron saint of corrupt politicians who send people to the gallows. If he could see how American society dipped briefly into enlightenment ideals of liberty but then veered back on its long-term course of racism and political cruelty, he’d laugh.

Oddly, wikipedia now lists the cause of Whitney Huston and Michael Jackson’s death as “cardiac arrest.” Well, true, but also a lie. The fellow in the picture from Saudi Arabia also experienced cardiac arrest. But what killed him? His government.

This is a really interesting article from the Marshall Project, about Scott Dozier: [mp] There were prisoners on death row who appeared to be trying to build a challenge in the supreme court regarding capital punishment. Well, like Roe, that’s over: the new supreme court would probably approve if the various states started buying swords to whack people’s heads off with.