I used to joke that I could wallpaper my bathroom with stock options. Back in the 90s, it seemed like every company was giving them away and everyone was either getting rich on options or wallpapering their bathroom, or both.

The big moment for stock options was during the early internet boom: there were lots of companies that basically were worth nothing, but were experiencing huge stock market price bubbles. So – since their stock was endlessly going up until they imploded and vanished (remember Netscape?) – the options didn’t cost the company anything, until and unless they decided to adopt a stable business model, in which case they suddenly were out a gigantic amount of money for the options they had been handing out like methamphetamine crackerjack since the company started.

Let me explain options to you, then. You may want to refresh yourself on valuations and market caps, because options depend heavily on that. [stderr] The ancestral option that crawled out of the pangaean soup is this:

If you’re familiar with a “right of first refusal” a right of first refusal is sort of an option: it’s just saying “I can buy this thing at some time in the future at any price that you offer to someone else.” The key to all options is that we assume things will change between now and the future, and we don’t know how they will change. If we knew how the future was going to play out, we’d have insider information and that breaks the whole way that speculative investing works – it’s like knowing which horse is going to win at Belmont: you make all the money.

Let’s suppose that one of you has fallen deeply in love with my milling machine, and you wish to own it for your ownself when I am done with it. You might try to get me to sell you an option on it: you sidle up (or, your attorney emails mine) and say “I’d like to offer $100 to buy an option on your bridgeport, to purchase it for $1,000 upon your untimely death. That’s below market, of course, but you will enjoy the $100 now, and who knows, you might outlive me, or bridgeports will have no value at all by the time you finally die.”

Now, I think about that deal and take your $100. Actually, that’s a lie: I think about that deal and conclude that you plan to kill me for my bridgeport, and I decline to sell you an option. There’s a lot of stuff tied up in this other than mortality – if the terms of the option are long enough, things could change dramatically – what if the US economy implodes into runaway inflation and $1,000 is the cost of a beer? You just made a very good deal. Or, maybe things go the other way, and $1,000 is the cost of a good house, and you’d be better off letting your $100 go, than spending everything you have, to obtain a piece of obsolete machinery.

That’s the basics of options: you’re establishing a gamble with an agreeable partner, that the value of something is going to change, and you’re going to be on the right side of that transaction.

That’s what the futures market is, at the commodity exchanges: it’s July now, but you might buy an option on 1,000 gallons of concentrated orange juice for $1/gal, in November. Let’s say the option costs you $500 – what you’ve done is hedged your bet – you have now fixed your price for orange juice ahead of the market. If you’re wrong, and the cost of orange juice goes down, you let the $500 go and buy cheaper orange juice (at a price low enough to offset your loss of $500). If you’re right, and the cost of orange juice goes way up, the seller has to honor your fixed price, and they wind up selling you the orange juice for much less than they could get on the open market. At the level where the big investment houses play, these contracts are all carefully written and are universally honored; even Donald Trump wouldn’t break one with impunity – it’s a career limiting move. 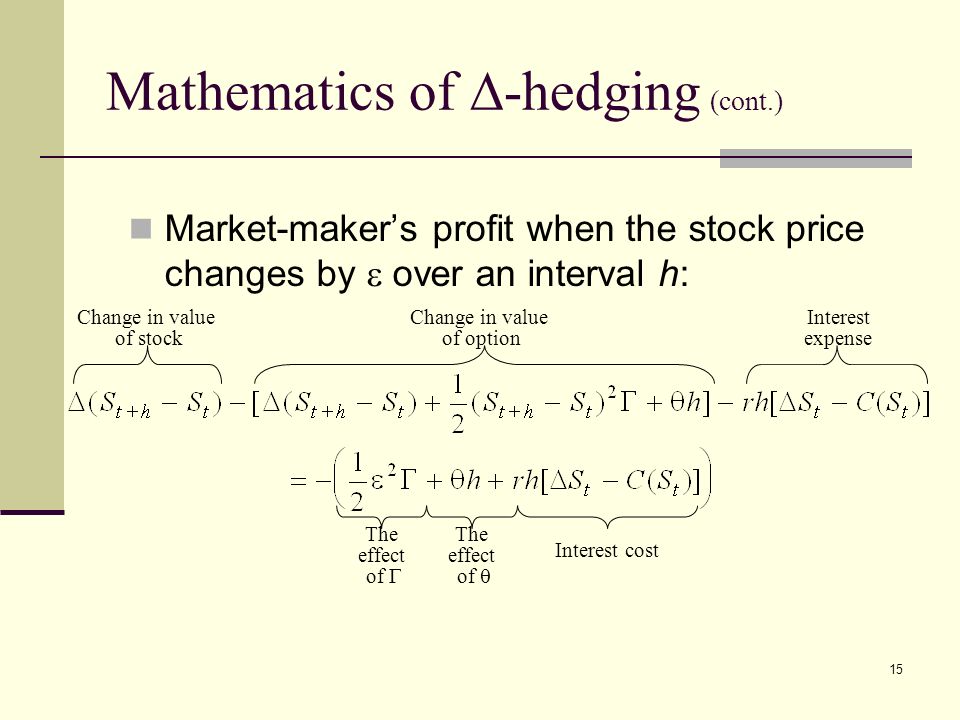 In the early 1990s, companies came up with the idea of giving employees “incentive stock options.” The way that works is, let’s say I am starting BadgerSystems.com and I need programmers. So to encourage programmers to come work for me instead of Google, I offer them stock options! You start working for BadgerSystems.com and you get the option to buy 1,000 shares of stock at their current value, which is close to zero and you have up to 10 years to do the transaction before the options grant expires. Let’s say BadgerSystems.com shares are worth $.10/share, so you whip out a checkbook and write our Chief Financial Officer $100. Now you own the shares. Another employee is less confident that BadgerSystems.com will succeed, and they just sit on the option and do nothing. Five years pass, and ReallyBig.com buys BadgerSystems.com for a share price of $500/share. The person who bought the shares to begin with has $500,000 worth of shares! Yay! The person who didn’t buy the shares whips out his checkbook and writes a check for $100, and is delivered shares worth $500,000! Yay! But the difference is: the first person owes long-term capital gains on their shares (about $175,000 even under Trump) and they end up with $325,000. The second person is basically handed $499,900 in income, and probably owes $250,000 on it because the taxes are different on short term capital gains versus long-term capital gains.

But it’s a great deal, everyone got something for nothing, right? No, not really, because the company just sold $500,000 worth of stock for $100 and that’s really stupid. It took a decade of wild speculation before boards of directors realized that companies were throwing money down the drain in the form of generous stock options grants. Oops.

Now comes the part we always have to talk about when we talk about stock options: derivatives. A stock option is a derivative, as is an option on a bridgeport milling machine. Derivatives are interesting because they add money to the economy that is out of control of the government, sort of. Or, it’s money that certainly ought to make governments uncomfortable, if they care about their banking systems (the US economy is owned by bankers, so it cares about derivatives, but not in the way it should) – derivatives add money because, in the example of the bridgeport, I now have $100 and I still have my bridgeport – there’s money moving in the market and nothing of value has been exchanged. Or (and now it gets weird) what if you take the contract I sold you for $100 and you sell it to someone else for $200? You just created $100 out of thin air! Basically, where that $100 came from is – it was squeezed like golden juice from the speculative difference in the future value of my milling machine.

A milling machine is not a great example; I should have done better. But you can see how an entire company can be monetized in parallel, by people who are basically using it as a marker in a gambling game. 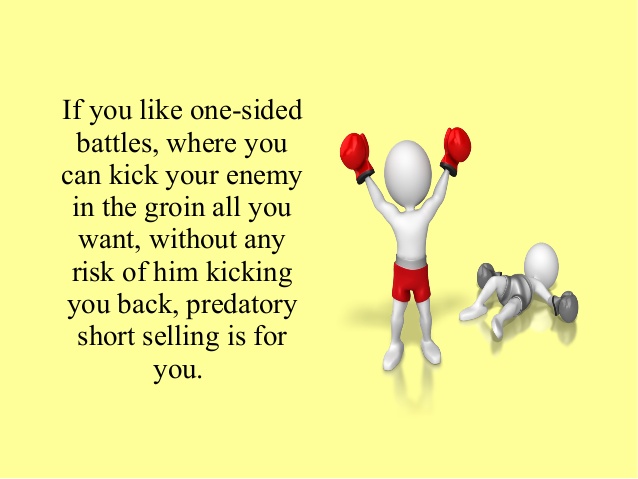 A “short” is when you think an asset is going to go down – let’s say BadgerSystems.com is a company you don’t like: sell someone options on BadgerSystems.com at $400/share and pocket their money. Then let’s say you think the market is going to crash – BadgerSystems.com plunges down to $350/share and you clean up: you buy the shares for $350/share on the open market and cover the short sale option and make $150/share – $150,000 (assuming stock was at $500 when you wrote the option) that’s real money. When we took V-One Corporation public in 1997, Janney-Montgomery Scott, and Piper Jaffray, the companies that financed the IPO, shorted the company on its own IPO – in other words, they knew it was going to go down so they positioned themselves to snap up shares when it did. Then, they placed blocks of IPO stock with people they knew would immediately sell it – and the price went down and they cleaned up. That’s illegal as hell, and they got fined almost 10% of what they made. That’s capitalism for you!

Company officers and small investors often get riled about short-sellers, because they appear to be horrible blood-sucking market manipulators who are driving down the value of their stock. Well, they are. But the whole system is corrupt and is built to be manipulated that way – the short-sellers are just the visible tip of the iceberg.

There is another kind of option-selling (that is now illegal) which is called a “toxic preferred share.” One of V-One’s investors talked the Chief Financial Officer – who didn’t know about them – into issuing such shares. The way they work is that those shares come with a liquidation preference – which means, if there are shares to sell, the preferred shares get sold first. Also, they come with a “note” which is essentially an option: the company guarantees the share price for those shares to be not less than a certain amount or the company will cover the difference.

Now, pause and think that over. See how clever you are; see if you can see the razor blade in the apple.

The way a toxic preferred works it means that the shareholder can deliberately drive the price of the stock down any time they want to, by using their liquidation preference, and the company has to cover the spread. So, what the shareholder does is takes up a short position – let’s say $10 below the current share price – then they sell their preferred shares as fast as they can. The company’s stock starts going down and the company has to write checks to the seller, as they drive the price down until they can cover their short position. So, if they had 100,000 shares of toxic preferred, the company just lost $10/share (which is the kiss of death for a small company that has just done an IPO) and the seller made $2 million, $1 million of it from the company and $1 million from whoever took the option.

Do not turn your back on a capitalist. Especially if they have a knife or a fork on their hand – they will eat you. And they’ll blame you for it.

I just found that cartoon by google searching for “predatory short seller.” Everyone hates them but they’re really normal people like Mitt Romney and Michael Milken. Donald Trump is not smart enough to play derivatives. He couldn’t even make money on hotels and casinos with tax subsidies – derivatives sellers would eat him alive.

Gambling on the stock market is much much less risky than going to a casino, where the house always has a slight margin over you. If you’re in an economy that is growing, you can basically bet with the house – bet on growth – and you’ll do fine, as long as you’re not trying to make a huge killing.