Doing flat-grinds on a belt sander is an eye/hand skill you never completely forget. But you can get rusty. So, I’ve been working the stiffness out of my muscle memory, while experimenting with my whole tool-chain to see what works best, where. My tool-chain has gotten vastly more powerful and complicated since I was in high school, making “prison shiv” style knives with just a file and a bench grinder.

So, I’ve been doing exercises around big flat-ground bevels, with the idea being to get my grinds flat enough that they’re, well, flat. If I put a beveled edge on a stone surface with some oil, it ought to stick there. The kind of Japanese-style chisel/hollow-ground cooking knives I want to eventually produce require that kind of grind.

It’s also tremendous fun to look at a piece of metal and try to see a knife in it. Sometimes it’s just a cut-off, i.e.: 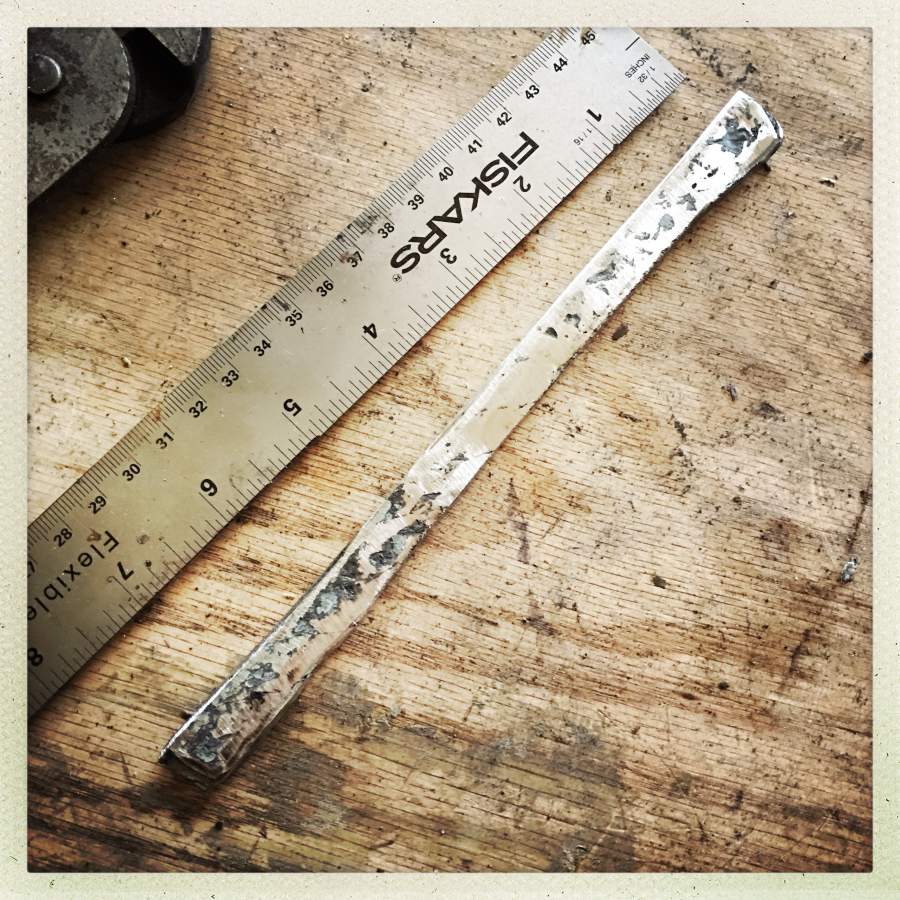 That’s the rough edge of a piece of cable-faced 1095 that I assembled. It seemed like a shame to throw it away. So I put it in the vice and whacked on it with a hammer a few times, to see if it was tough enough to survive. After a few whacks, I came to respect that little piece of steel; it did not want to go gently into the garbage bin.

Since I made that, I’ve improved part of my process. You can see that the metal still has a lot of forging-scale to grind off. I’ve stopped doing that sort of grinding on my bench sander, and have switched to doing it with the collection of angle grinders. On one end of my bench I have a library of angle grinders, all hooked up on a power bar, ready to go. One has a wheel, one a flap-disc sander, one a diamond cutoff wheel, and one a steel brush. This is not conspicuous consumption on my part it’s convenience and safety (not in that order) I figure that if I spend a lot of time mounting and dismounting angle grinder wheels, there is a higher chance I will mount one off-balance, or crack it, or not tighten it down enough. If I don’t remount wheels in their lifetime I can be careful to get it right when I replace a wheel. It’s also simply fantastic to be able to reach over and have the right abrasive sitting there, already mounted and ready. Given that you can get a used angle grinder on ebay for about $19 (if you’re willing to replace a chewed up wire or plug) they are basically giving them away. Since I have huge amounts of space and tons of storage room under those gigantic benches I made: why not?

When I took the piece above, I did some shaping on the inner face with an angle grinder, then switched to the big belt sander. 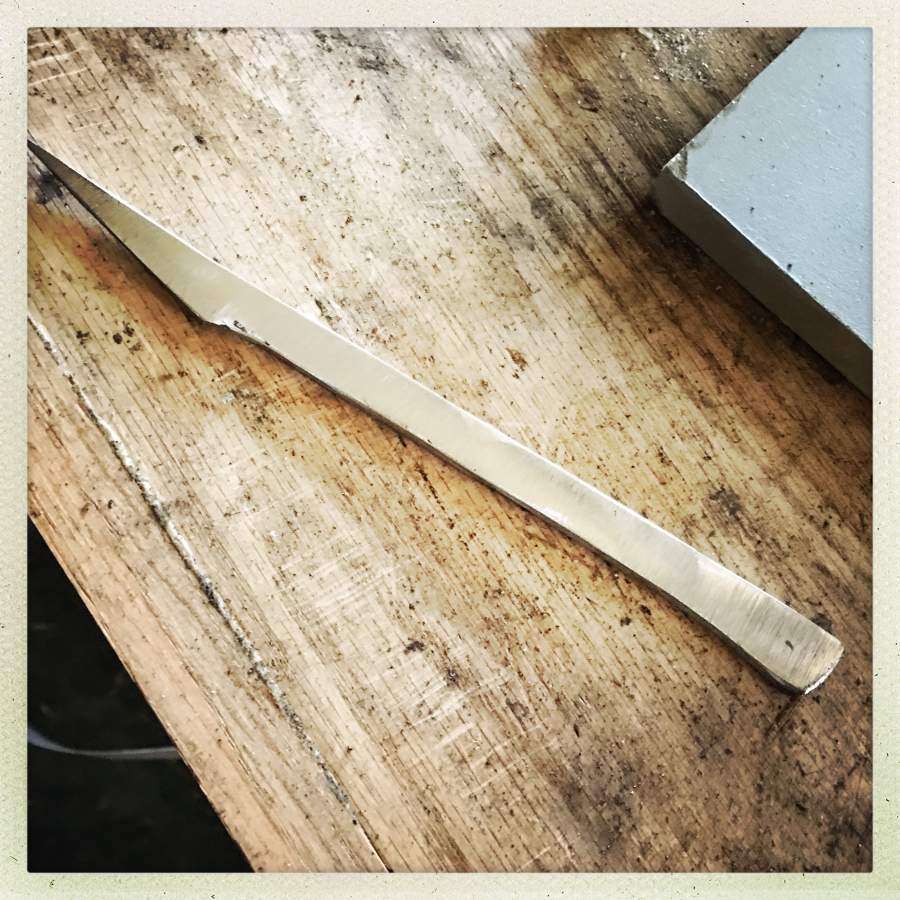 Well, apparently it wants to be a sort of scalpel-like thing. I immediately dubbed it the “kiriscalpel” (short for kiridashi scalpel)

Remember, this is mostly just an exercise in getting my grind-lines flat and straight, and my bevels smooth. But, as I work on it, it starts to take a shape that I like – which makes sense because I’m shaping it; I’m just going where the steel and the grinder take me. I’ll have plenty of time to work on designed shapes with intent, later.

At this stage you have to resist the temptation to grind everything down ’till there’s no forge-scale at all. That’ll all come out by the time it’s hardened and I’m into fine-grinding it. 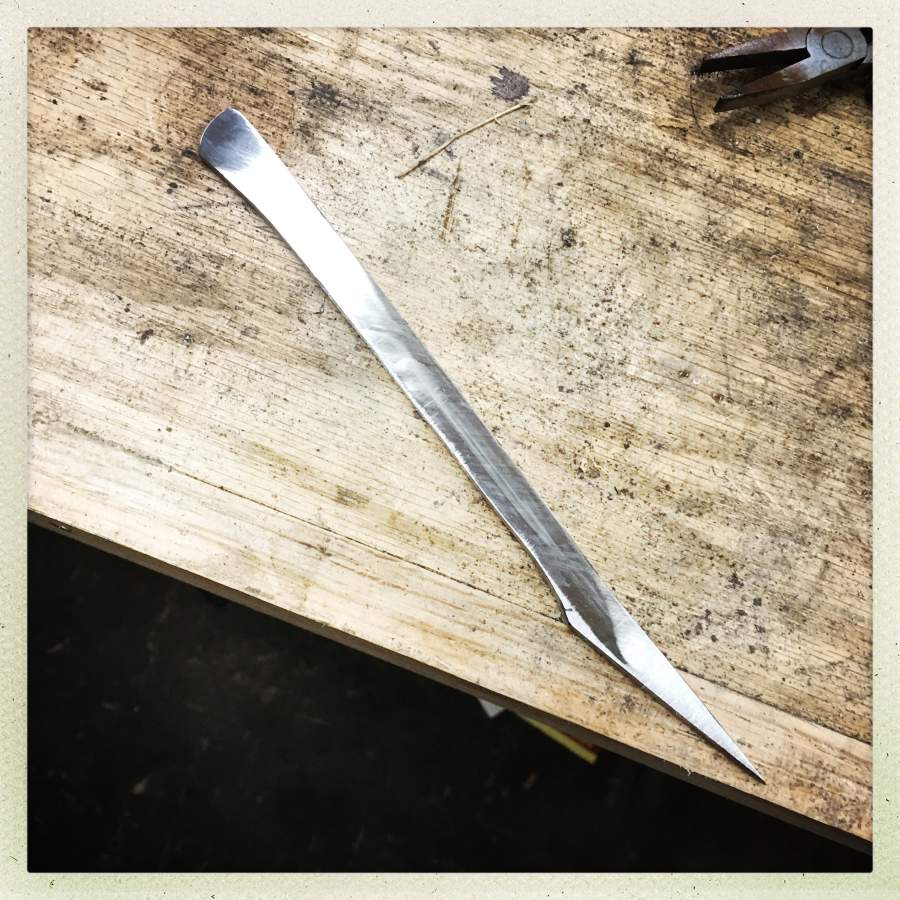 When it’s starting to look like it’s flat and smooth, I can check the flatness by going over to the flat stone and giving it a few strokes back and forth on some 1000-grit sandpaper. That immediately reveals where there are hills or valleys. It also makes me cringe and think my grinding is shit. But when I step back and think about it I realize that we’re talking machine tolerances – this is not wood-working – and that’s probably only about 1/1000 of an inch off.

Suddenly, I feel a lot better and realize how remarkable the human hand/eye/machine gestalt can be: we are capable of high precision when we’re not even trying hard. (“trying hard” would mean walking over to the milling machine, mounting the blade up, and face-milling it into mirror-like perfection.

This is still “goofing off” territory. The next challenge (and it’s really fascinating to me!) is what does the edge look like? How far back does it get ground, where are the plunge-lines, what angle is the bevel? On the big belt sander, this is about 5 minutes of work since the steel is annealed; it has not been hardened yet (except by repeated heating and bashing) 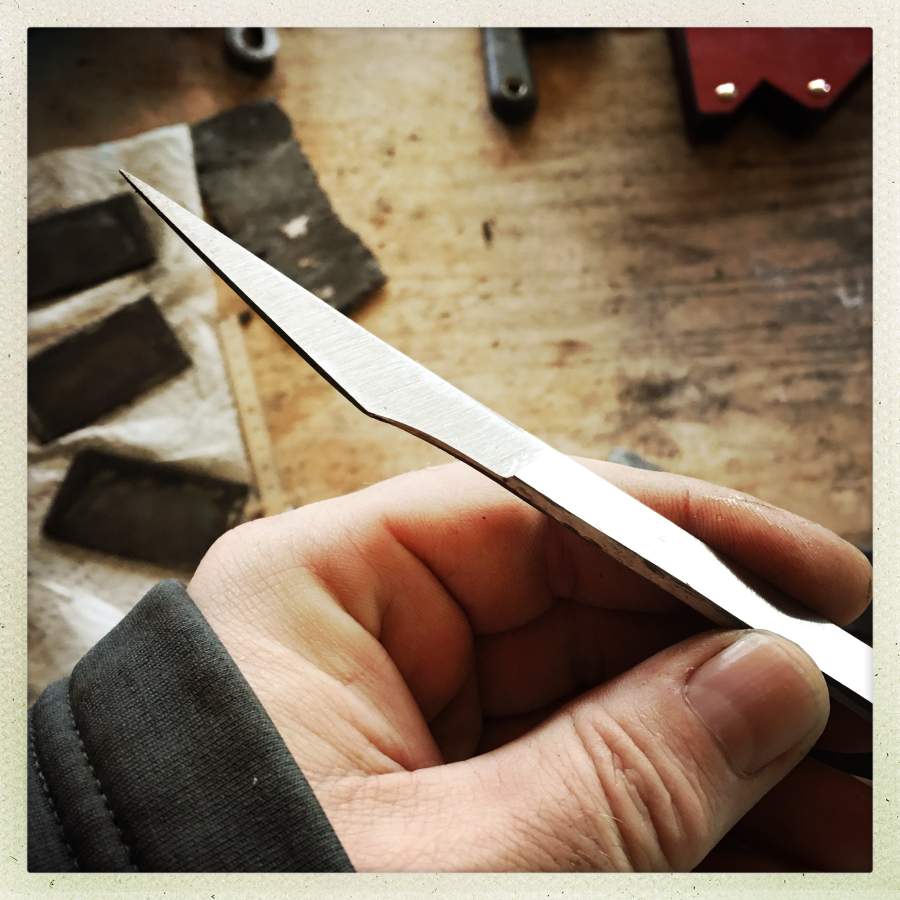 If you look at the face of the bar close to my thumb you can see various colors in it; this is a multi-part bar – the face is cable damascus (I made earlier [stderr]) the base is 1095 high carbon steel, 1/8″ thick. I heated them and welded them together. This is a high risk bar, because it’s going to be internally stressed – the cable will expand/contract in a twist and at a different rate from the 1095. However, if it’s welded right it won’t blow apart, it’ll just bend/unbend as it heats.

When you’ve got the proto-edge down to about the thickness above, it’s time to make a decision: garbage can, or heat treat? I suppose it’d make a good palette-knife for a painter even if it wasn’t hardened for sharpening, but I’m interested in the process and whether this technique works at all. If cable-faced 1095 blows apart when you quench it, I would rather know now, before I make a large knife and spend hours on a disaster. 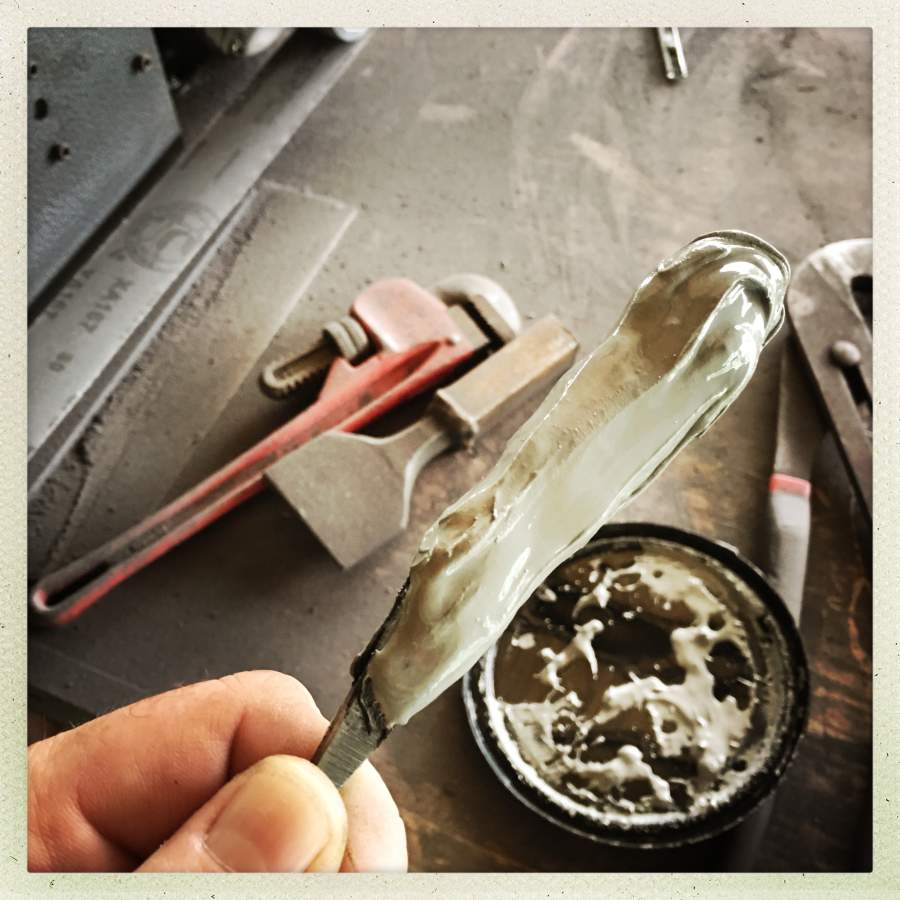 Here’s one way to reduce the likelihood that the blade will blow apart when it’s quenched: blanket it. The Japanese swordsmith/knifemaker uses clay and charcoal and secret mojo sauce to blanket the blade. Various bladesmiths use various things. I use furnace cement with a bit of charcoal added (more carbon near the steel will keep it from leaching out of the blade so much when it’s at quenching temperature) and some Fe2O3 – black iron oxide.

Some time when I am quenching a blade I’ll shoot video, but this time I did not. Usually, my hands are full and I’m busy and don’t want to be messing with cameras.

Quenching is quick: you heat the blade until the edge goes non-magnetic (“normal” temperature) then soak it at that temperature for a couple of cycles, and plunge it into some kind of coolant. I’m using fancy 1095 steel, which is not very quench-friendly (“ask not ‘why we do these things because they are so hard?’ we do these things only because they are so hard!”) and likes to be quenched in automatic transmission fluid, or a toxic and stinky brew called Matrix-50. Naturally, I go with toxic and stinky out of a feeling of kinship.

The clay blows right off with a wire brush, and then it’s back to the grinder to finish all the surfaces and bring the edge down, and straight. That’s a lot more work once the steel has been hardened. My hardness gauge rasps say it’s about Rockwell 60, which is a bit hard but it’ll come down some as I repeatedly heat/cool cycle it on the sander. I don’t want to get the blade hot (over, say, 500F) so it’s a lot of sand-dunk-sand-dunk-sand.

One trick I use – I keep the blade wet while I am grinding it and if the water disappears off the back, it’s too hot. In fact, when the water disappears off the back that’s because it’s turned to steam and the heat from the other side of the blade is about to poach my finger! It’s a bit of a weird moment when you realize “I am about to burn my finger” and there’s not a damn thing you can do about it except dunk everything in your water-bucket as fast as you can.

Hours later, then on to fine-polish on the stone with oily sandpaper, and an hour in the etch-bath, it’s ready for the next stage. 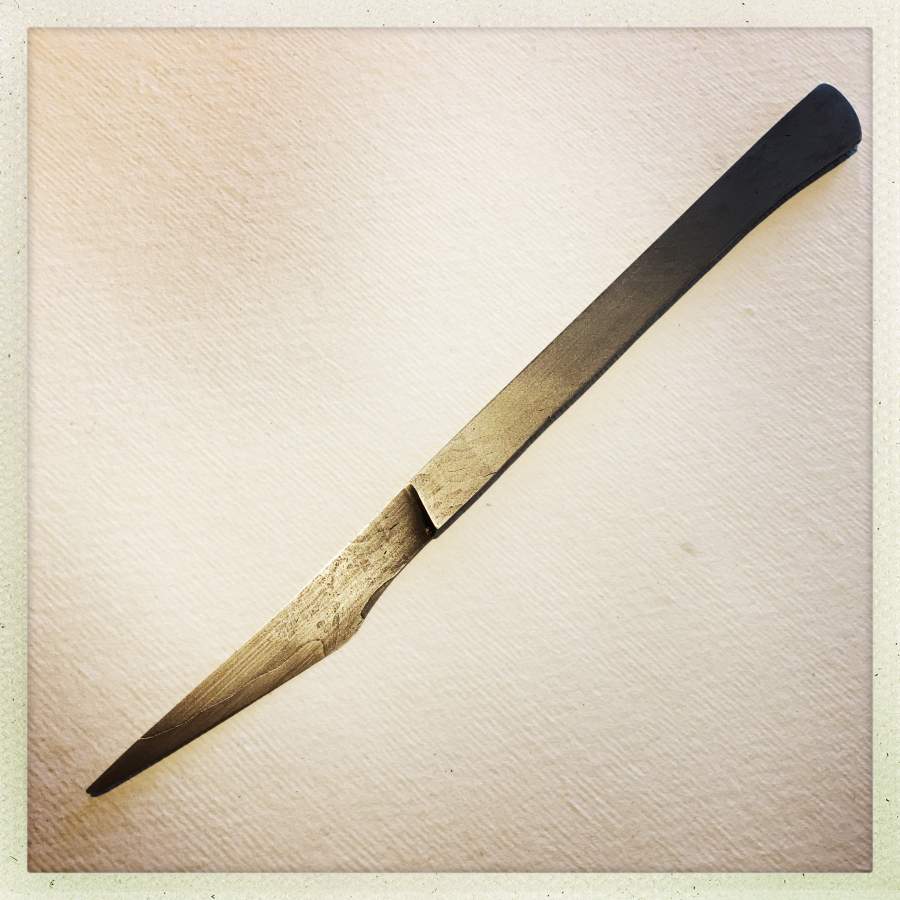 [The tip isn’t broken, that’s the shadow cast on the paper.] Here’s a couple funny things – see the “chip” at the neck of the edge? That’s not a chip, that’s where the cable facing is ground down to the 1095. Put differently, that’s a bit of 1095 sticking out. It’s actually smooth as buttered silk and perfectly flat at that spot. I could polish the whole blade down more to eliminate it, but I like the way the cable damascus cladding comes down at the angle of the edge. I also like the way the 1095 sticks out along the edge, as it was intended to. That is some badass-looking edge, in my mind.

Note the texture in the handle; that snakeskin pattern is the transitions between the welded-up wires in the wire rope – it’s imperceptible to the touch; the whole thing feels like silk.