This is a useful chart, if you find yourself discussing migrant arrests.

Meanwhile, the US Government is pulling a trick straight out of recommended reading book How To Lie With Statistics [wc] – convert into a percentage and hide the underlying data. Since 1.6% of crimes are committed by unauthorized immigrants, you can say “immigrant-related crime is up 300%!” if it goes up even a little bit. Which it’s not, of course – what they are doing is re-defining what constitutes a serious offense; if you know someone who knows someone who is maybe in a gang, they mark you as “gang connected.”

There is a good explainer here [wola] 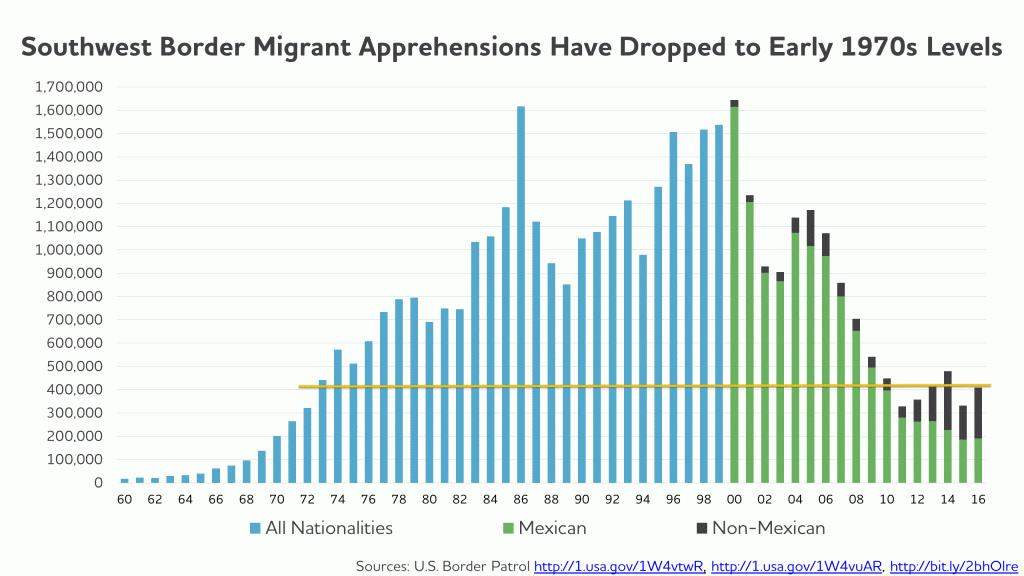 The number of migrants apprehended at the U.S. border has substantially decreased over the last decade, and it’s currently at low levels similar to the 1970s. Given that overall migration numbers are way down, we are at the point of diminishing returns in terms of additional Border Patrol agents. The administration’s proposal to hire more agents and justification for building a wall would be further called into question if the apprehension numbers continue to decline.

Migrant apprehensions are, in other words, a nothingburger. What we should be worrying about is how to get all those ICE goons disarmed and locked in metal mesh enclosures.

During the run-up to the Iraq war, when they were still saying it would only cost $30 billion or so, I suggested that the US could take $15 billion and divide it up by the number of government employees and military in the Iraqi government, and tell them “we’ll give you all this money if you depose Saddam.” In retrospect, it was a better idea than I realized. How much would Trump’s wall cost? Why not divide that by 300,000 or whatever and offer a one-time cash bonus of $10,000 to anyone who’s willing to leave?