One of the dynamics I always like about making things is that you get into a weird loop in which you’re making things to help you make things – and you spend a lot of time making preparatory things before you can go full production.

I see all of this as being on a continuum between “do everything by hand” and “do everything on a 3D printer or CNC machine.” Part of the art of crafting is figuring out what is the right amount of automation to make you comfortable.

Your desired results also shape your selection of tools – for example, I plunked down for a hydraulic forging-press because I knew that if I wanted to do forge welding, my options were:

There are similar trade-offs at each level of a process. Should I grind edges by hand, or a belt-grinder? Etc. When I am wading into these decisions I always remind myself that there is no moral component to this – there is no “right way”; I’ve seen some lovely knives made on CNC machines, and milling machines, and hammered into shape. We should not feel disrespect for the Japanese master swordsmith, who uses a student as a triphammer. I don’t want to argue about how someone got an artistic result because then we get mired down in “digital or film?” debates when it’s the result that matters. To the artist, the path that they took to get to the result matters (it may be very important to them!) The person who holds the sword, hundreds of years later, never can tell if the hammering was done by a student, or by the hand of the master. 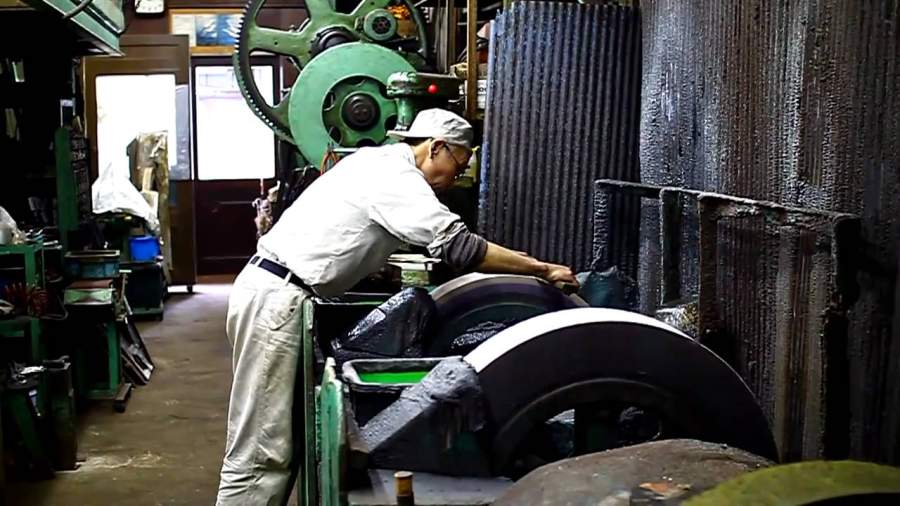 My interests lean toward Japanese-style cooking knives, which have a very particular grind: hollow on one side, beveled on the other. To get the hollow grind, traditional Japanese knife-makers use a huge water-stone wheel. That’s “too much infrastructure cost” for me, though I’m sure that if one was going to do a life-time of knife-making, it would pay for itself in a couple of years.

Around the time when Charly started posting his build logs of his grinders, [aff] I started designing a grinder specifically for the shape of knife I want to make. A single large wheel for hollow-grind, and a platen with an adjustable rest, that can be set to produce a consistently perfect bevel safely. (The bevel in my little kiridashi was entirely hand-ground)

Since I’d been experimenting with water-jet CNC cutting, it occurred to me that I could design the machine in Inkscape, to be cut out of a plate of steel and then welded together like a pop-up card. It turned out that’s not so easy, but once I’ve got the design done I suppose anyone who wants a machine like mine will be able to just take the .SVG file to a CNC shop and have them whap out a copy. Since I don’t plan to move things around very much, and I want it to be heavy and solid, “why not just use a plate of 1/2 inch steel?” Cut it out and pop it together with a few welds!

It turned out that visualizing it went so far, because I couldn’t tell for sure if all the parts would fit together right. So I decided to just prototype a version out of fibre-board. 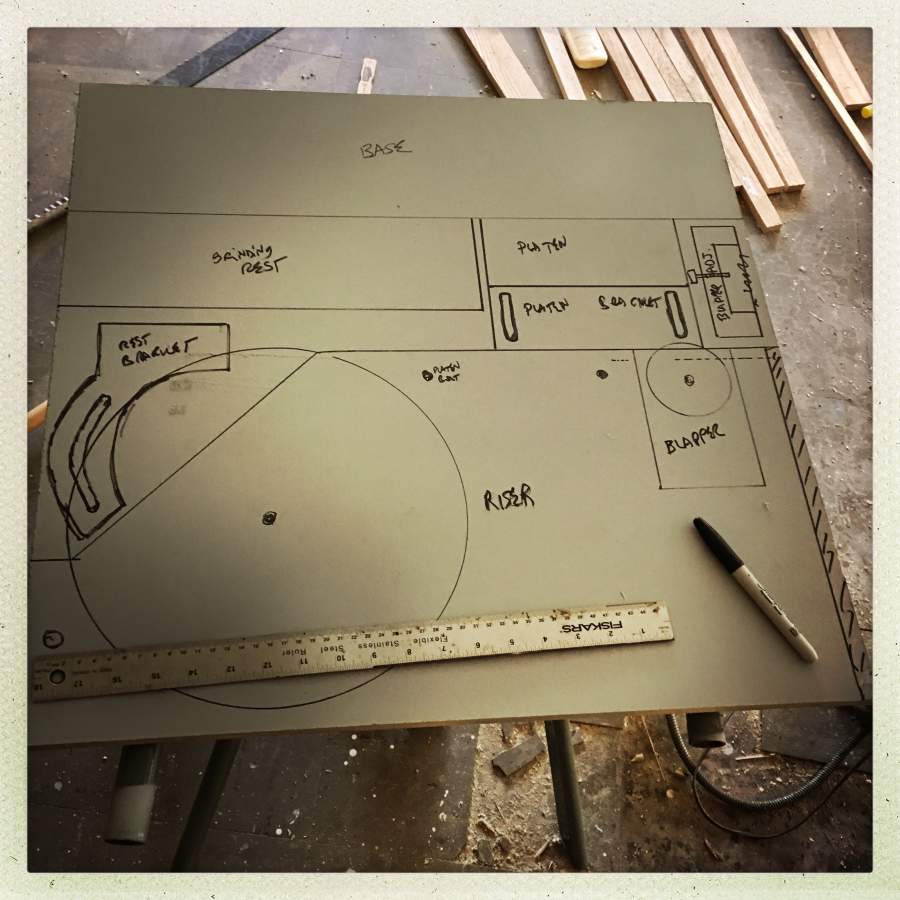 One thing I use a lot of is matte grey primer. It’s a great way of re-surfacing something so you can write on it over and over.

The “blapper” should technically be called the “tracking control” or something but I thought “blapper” was easier. My original idea was to fit it on a single 24″x24″ plate, but it turns out that’s not quite enough metal. I feel like there is no need to struggle to keep it small or light; after all, look how much smaller and lighter it is than Ashi Hamono’s machine! 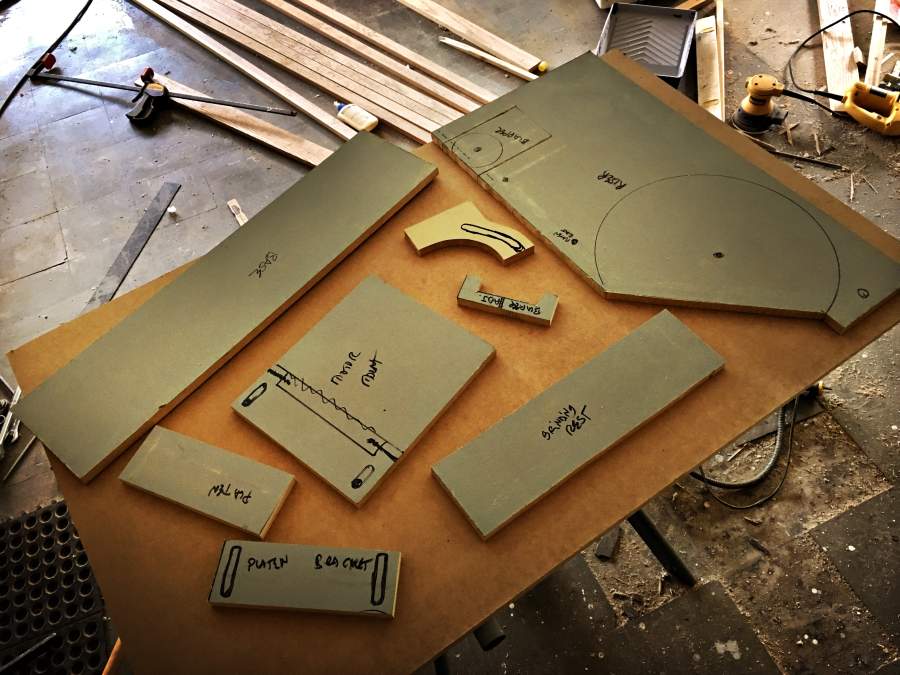 Then it was time to break out the hot glue gun and stick everything together, to see if it looks like it’ll fit. 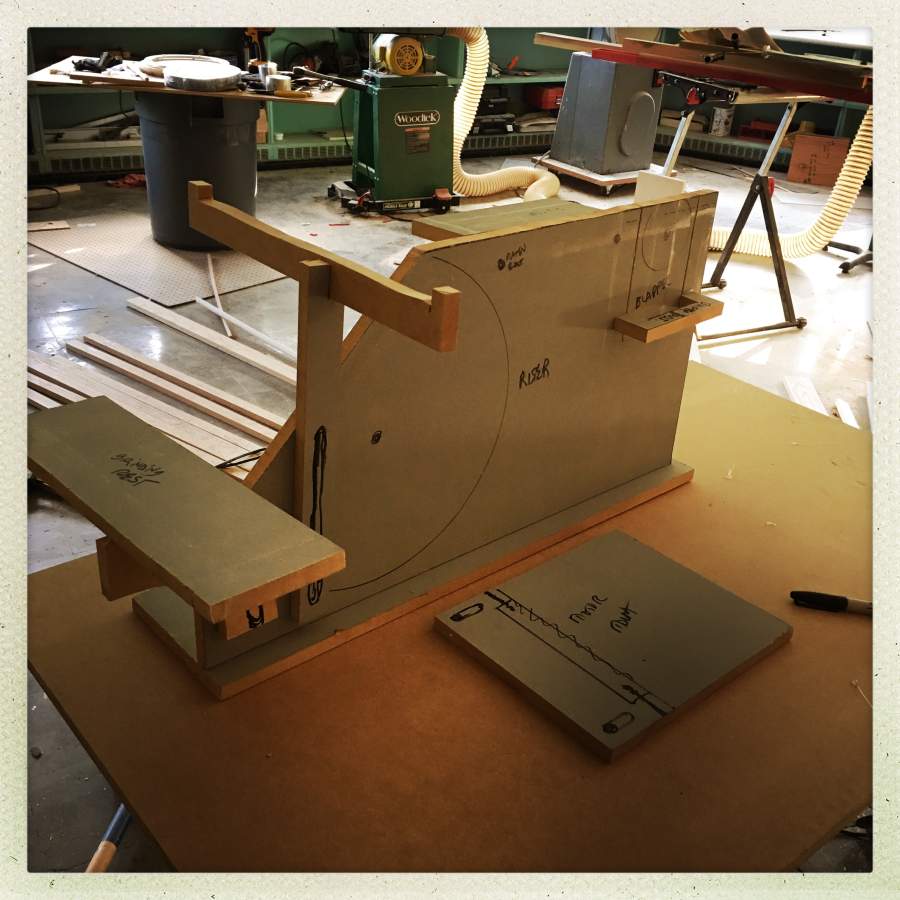 The motor mount/tensioner system is gravity-based – it’s basically a great big hinge that the motor will sit on; as the weight of the motor is pulled down, the belt will tension.

To get my hollow grinds, the big wheel at the bottom has a cross-rest; it doesn’t need to be very adjustable – I’ll get it true and aligned and lock it down and never move it again. The upper rest: same thing. That leaves tracking, which is what the blapper is for. I’m going to drill a hole through the end of the frame and across the top of the blapper, so the idler wheel will be able to change angle. To allow it to go back and forth, I’ll use a knurled, threaded rod, through the blapper arch. Other than the wheels rotating, the machine has basically no moving parts. 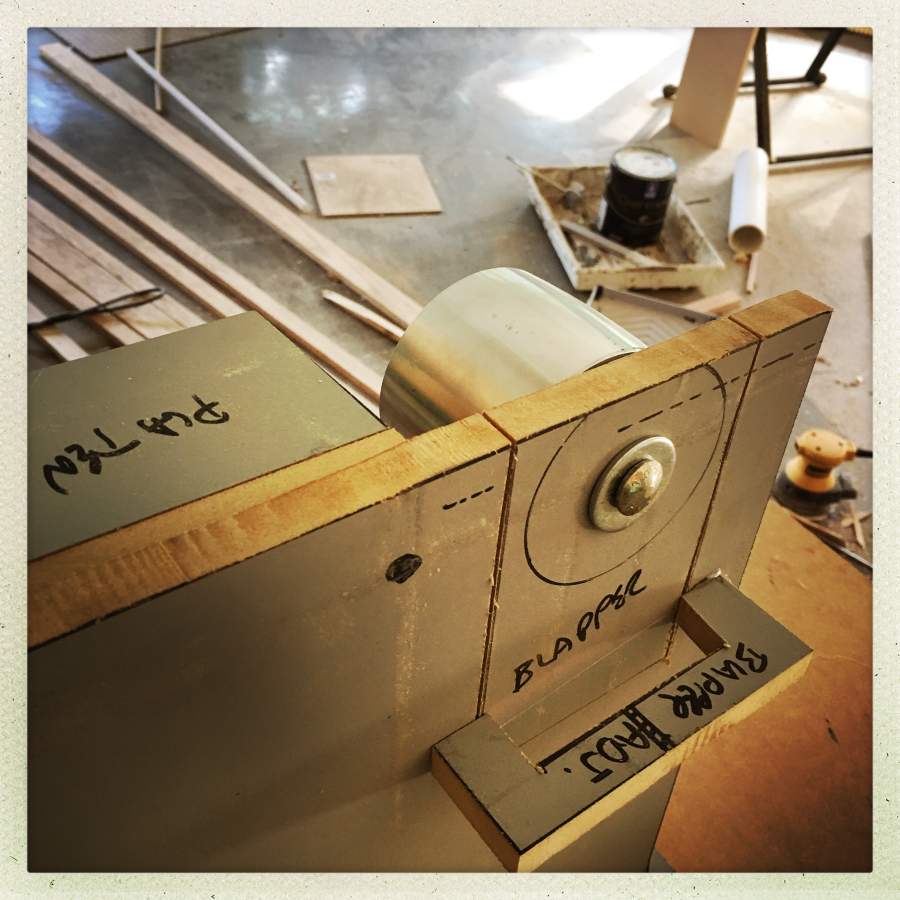 The platen and upper support will get adjusted and clamped down into place and will also, probably, never be adjusted again. I’ll make a clamping rod that will go from the upper support and hold a blade so it’s at the correct angle to the belt. I thought on and off about making the belt go through a water trough for cooling, but I think it’d mostly just fling water all over the place (look at the mess-catcher in Ashi Hamono’s shop) – I do not need to do full-speed production.

Several times in the process of designing the machine, I’ve tried to think of how to make it more attractive. Since it’s going to be water-jet cut, it could be metal filigree, so long as it’s strong in the right places. It turns out I’m just not artistic in that way. I’ve asked a couple artists I know if they want to give designing a machine a shot, but it’s harder than it looks. For me, just describing the machine turned out to be difficult, which is why I built the mock-up. I suppose coming up with names like “blapper” for the “tacking control” doesn’t help.