I saw Infinity War last night and I am still trying to massage the hand-mark off my forehead, from all the /facepalm I did. What a beautiful, utterly pointless, mess of a movie. 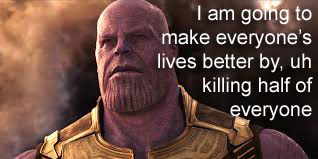 It’s basically a bunch of special effects about punching people. And people punching gods, gods punching buildings, spacecraft punching gods, people punching spacecraft, people in armor punching people in spandex, and people in spandex punching people in armor. Sometimes a knife or an axe or a spear appears but it is pretty quickly discarded in favor of fists. Well-designed planned defenses like the border of Wakanda turn out to be defended by people with spears and fists, instead of fusion bombs outside of the shield (“everyone close your eyes there is going to be a brief flash as the enemy disintegrates into component atoms!”)

It’s pretty, but stupid at every level – there is not just tactical stupidity, there’s strategic stupidity. The villain is a great big mountain of stupid, with stupid motivations. But that’s OK because he’s being opposed by all the good people in the universe so he shouldn’t succeed. Except, [spoiler] he does.

The villain wants to collect a bunch of rare drops so he can craft a powered-up glove that will let him kill half of everyone. Back when I played World of Warcraft a lot, I really would have sympathized: sometimes you do have to whack your way through mobs of people trying to stop you, because you’re supremely powerful, so that means: time to send a minion. Thanos’ use of minions is nonsensical.

If you’re supremely powerful, why even have minions? I’d send a lawyer to explain my wishes to the opposition and otherwise I woukd crush them personally. Minions always screw up in movies.

Need I mention that within about 10 seconds of the movie starting, people are punching eachother? And, the furious rate of punchings continues without let-up until half of everybody dies.

None of the above gets close to the heart of the absurdity of the movie, though. The absurd part is the bad guy, Thanos’, motivations: he wants to kill half of everybody because the planet he was from was overpopulated. Here’s this great, powerful, warlord with a bunch of high tech stuff, including space travel and his solution to overpopulation is: “half of you die.” Not “half of you get on this spaceship and go look for someplace empty or fun to invade.” Nope, “half of you die.” But the absurdity is universal – because his planet was overpopulated he wants half of the universe‘s life to die. 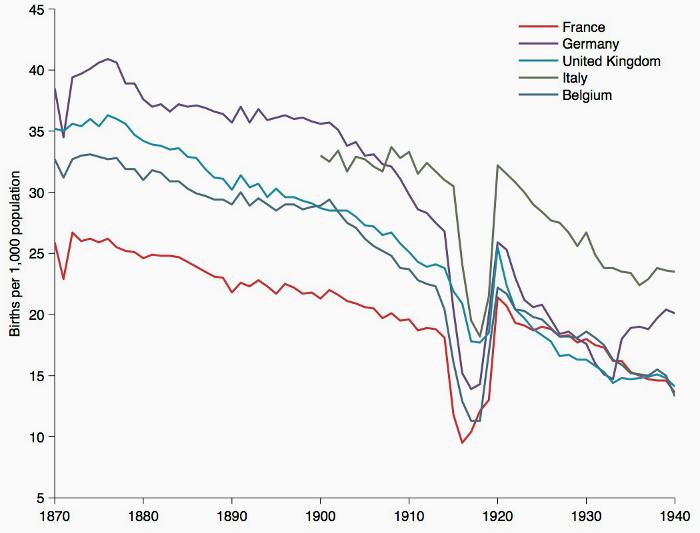 Population of Europe after WW

Was Thanos’ stupid plan to somehow cause a permanent dip in population, or was he just trying to drop the population for a decade or so? Populations replace themselves pretty quickly if you stop punching them for a while.

I kept expecting Benedict Cumberbatch’s oh-so-hip Dr Strange to try to explain it to Thanos, “Thanos, why don’t you just go around distributing birth control and stop acting like a god damned southern republican?”

The special effects were glorious – the people who created the designs and assets did a fabulous job. Things like the Hulk’s version of Iron Man’s armor – delightfully executed. Unfortunately, all in the service of an incredibly dumb plot.

Another aspect of the movie that really riled me was the impedance mismatch between the Guardians of The Galaxy characters and the Avengers characters. Guardians of The Galaxy is practically a parody of the superhero genre, and jamming together with Avengers, which takes itself seriously, harmonizes like a baloney milkshake. Drax, who is basically a parody of over-muscled god-blockheads like Thor, in the same movie as Thor – it does not work. It badly does not work. So, rather than make it work, let’s punch some people!

Lastly, there is the delicate subject of the Wakandans. I really enjoyed Black Panther because of its beautiful design elements and some of the inspired acting. But I kind of thought the whole “we are going to defend our homeland with spears and clubs” was maybe leaning a bit hard on certain … stereotypes. Seeing the king of Wakanda die, making a stupid stand (instead of having Stark whip up some fusion battle-cannon) was eerily reminiscent of Zulu, and not in a good way.

Summary: a fun punch-up that wanted to be much better than it is. But that’s an impossible order, given that it’s completely painted into the corner of spandex and explosions punch-up movies. I was glad to see half of all the superheroes die at the end but I’m afraid they’ll be back for more bad movies.

Iron Man: why didn’t he just whip up a few H-bombs, if he’s got nanotech, that would be a snap. Considering that Stark started off as a weapons designer you’d think he’d have, you know, designed some weapons.